After teasing us earlier in the year over whether the Honor 7 was going to come the UK (and Europe), Honor now leaves nobody in any doubt whatsoever.

That’s because today is the day that Honor took over an old brewery in London’s trendy Brick Lane to show off its most exciting smartphone to date.

The Honor brand has been making good progress in the UK this year, especially since the arrival of the Honor 6 Plus that got the brand a huge boost when the phone got onto the high street with an exclusive tie-up with Three.

In keeping with the Honor tradition of including a decent sized battery to keep you going for longer, the Honor 7 comes with a large 3,100mAh battery – ahead of many rival flagships from Samsung, LG, and even parent company Huawei with its P8.

Pricing wise, it’s expected that the Honor 7 will sell for somewhere between £200 and £250 – possibly with a very special introductory price – and with two possible versions being released – a 16GB model (with memory card slot) and a 64GB model (with a memory card slot that can alternatively be used for a second SIM).

The event today will include hands-on time with the new device, as well as a special music performance from brand ambassador Nellie Bell who will be supporting a headline performance from Foxes.

Nellie will also present the new music video for the new Brave song she has just written and recorded.

It looks like it’s going to be an interesting afternoon and evening and I’ll be bringing you as much information as I can later today and tomorrow, most likely whilst nursing a huge hangover.

Don’t worry, I’m not expecting any sympathy. It’s all part of the job. 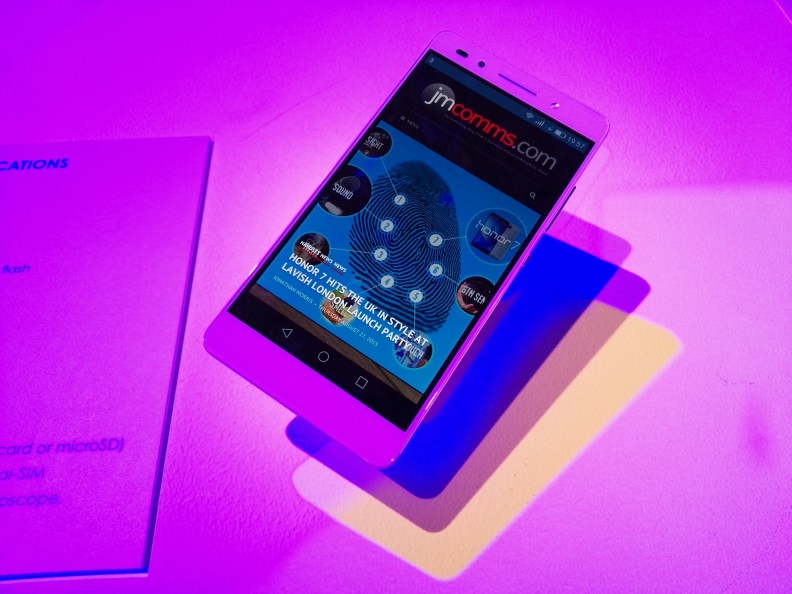 London, UK, August 28, 2015 – Honor today introduced the European version of its flagship honor 7 smartphone. The fully metallic device, which is aimed at digital natives, is built for single-handed use and offers innovative and smart functions including multimedia capabilities operated through its dedicated smart button and gesture-enabled fingerprint reader.

Speaking at the product launch event in London this afternoon, George Zhao, President of Honor, said: “The honor 7 embodies our philosophy and mission to enable superior mobile Internet experiences for the Internet generation and era. The device’s precise dimensions and metallic finish offer an optimal form-factor and premium feel, while its smart and multimedia capabilities inspire action and creativity.”

Zhao also spoke about Honor’s first-half results for 2015 at the event, citing a revenue figure of US$2.63 billion. He attributed the successes to Honor’s steady technological investments, specific targeting of digital natives, and use of strategic partnerships to enhance mobile Internet experiences. As a pioneer brand, Honor will keep extending its reach. Meanwhile, it will concentrate on, and continue to invest in, some key markets such as the UK, France, Russia and India.

Among all the attributing factors, George highlighted the importance of partnerships. Partners of Honor are not limited to sales channels. More importantly, they cover all the interests of digital natives, such as entertainment, services and technology, which will help Honor develop more cutting-edge and creativity-driven products for the digital natives to unleash their inner creative. He summarised that Honor, as a global pioneer, is pursuing and will continually seek out more strategic partnerships covering all fields to foster an ecosystem for the digital natives enabling better mobile-Internet user experience.

Building an Honor ecosystem manifests the brand’s focus on the role of customers. Honor is customer-oriented and it adds value to the customer experience by collecting users’ feedback as one of the basics of product research and development and product iteration. “The honor 7 clearly showcases our commitment and capability,” Zhao said. “It’s now up to us to take the mobile Internet experiences it enables to new heights with partners in Europe that share in our vision.”

The honor 7’s fully-metallic body is air-brushed with a ceramic coating, offering an unmistakably premium finish. The device’s ergonomic 5.2-inch encasing and carefully positioned buttons and sensors meanwhile allows for ergonomic single-handed operation like never before.

The honor 7’s frame-free metallic fingerprint reader allows for rapid 360-degree fingerprint authentication from various angles and even boasts a self-learning capability that allows scanning accuracy to be enhanced through the subtle re-recording of registered fingerprints during use. The reader also supports intuitive gesture controls that enable users to do everything from unlocking their smartphone, to answering calls or taking photos. As users begin to use the fingerprint reader, the phone learns and recognises their pattern and becomes even faster over time.

Performance capabilities and tuning for the constantly connected

Powered by the ever-intelligent HiSilicon octa-core Kirin 935 processor with its A53 and punchy 3GB RAM (memory) and 16GB ROM (internal storage) offering, the honor 7 has the muscle to offer consistently smooth performance. Its L-shaped circuit board meanwhile eliminates the possibility of overheating. And when it comes to connectivity, Honor’s Signal+ technology and a smart dual-antenna design allows for the networks with stronger signals to be found at 80 times the average speed of similar devices.

Coupled with a long-lasting 3,100 mAh battery, which offers exceptional standby and use times as well as reverse and quick-charging[1] capabilities, the honor 7 is the ideal companion for the always-on and active consumer. The smartphone is ideal for multi-tasking, surfing the web and intensive gaming.

The honor 7’s superior multimedia capabilities are facilitated in part by its 20 MP rear-facing camera, which is powered by a Sony IMX 230 sensor and Honor’s PDAF fast-focusing technology that allows its f/2.0-aperture lens to capture strikingly vivid low-light-condition images in as little as 0.1 seconds. The 8MP front-facing camera meanwhile offers a wide-angle f/2.4 aperture lens and built-in LED flash. Complimented by the honor 7’s image enhancement capabilities and panorama feature, it’s the perfect selfie or groufie tool.

For the creatively inclined, the honor 7 offers a host of personalised filters, while its Good Food mode makes taking professional-grade meal shots a breeze. The device is also equipped with a revolutionary light-painting capability through which users can construct vibrant artistic images. To note, a sapphire lens cover protects the camera from harmful scratches, giving users peace of mind.

Built to redefine mobile Internet experiences, the honor 7 offers exceptional smart capabilities aided in part by its smart key, an additional button placed on the left side of the device that can be used for snappy Google searches on the go. The equally well-placed fingerprint reader on the back of the device meanwhile also functions as a camera trigger, enabling users to take selfies without having to reorient the honor 7. For added convenience, the honor features more voice capabilities, such as the ability to be woken up with a designated command, like “Dear Honor”. Follow that up with a “Where are you?” and the device will call to you to indicate its location.

The honor 7 also makes taking screenshots easier with its knuckle-tap feature, through which users need only tap on the screen twice with their knuckles for an instant full-screen capture.

The honor 7 will be available in two colours, Mystery Grey and Fantasy Silver. It will be on sale in the UK, Germany, France, The Netherlands, Italy and Spain, via vMall, http://www.vmall.eu/uk.

The honor 7 will be available in two colours, Mystery Grey and Fantasy Silver. It will be on sale in the UK, Germany, France, The Netherlands, Italy and Spain, via vMall, http://www.vmall.eu (see separate announcement) and later via the other usual online sales channels, with other markets to follow soon.

7.30am countryside walk. Photos taken with the Rea

Sky at night. 🌃 Taken with a new phone coming v

Unnamed phone with a premium camera experience, an

Even pigeons understand social distancing, so it's

Another walk around a lake. Can't wait until I can

Walking the lakes with the Oppo Find X2 Pro. #Sho

My review of the Realme X50 Pro 5G is live. The pr

If you wish to support my site, please consider a donation towards hosting charges.