It’s so new it isn’t even in a phone yet, but already it has picked up its first accolade. Android Authority awarded Huawei’s new Kirin 970 chipset a trophy after its unveiling at a keynote speech at IFA, Germany’s biggest consumer electronics show.

So what makes Kirin 970 so good, and how will it bring benefits to users?

First, let’s go back a year and look at the switch from Huawei’s Kirin 950/955 chipset to Kirin 960. It was a tremendous leap for anyone into mobile gaming, who may well have been put off by the lacklustre GPU performance on earlier flagship devices.

Indeed, Huawei had a reputation for doing just about everything right, with the exception of GPU performance. For some time it was an easy way for rivals to attack the company.

Things might have been fine for the vast majority of phone users who weren’t avid gamers, but it was little good when Huawei was coming last in the reviews doing the easy, and now pretty much obligatory, benchmark comparisons.

As more reviews called out Huawei on the poor GPU, things had to change, which is exactly what happened when Kirin 960 debuted in the Huawei Mate 9 range last November, and later the Huawei P10 and Honor 9 this year.

Finally the GPU could stand its own in a crowd of powerful alternatives from Qualcomm, MediaTek and Samsung’s Exynos. The chipset also included an advanced Cat 12 LTE modem, for download speeds of 600Mbps and upload speeds of 150Mbps. Even today, many rivals don’t offer this, with Cat 6 and Cat 9 devices still commonplace.

Kirin 970 doesn’t just bring more powerful computational and graphical power, although it does of course do that too. Instead it brings an emphasis on its readiness for artificial intelligence operations, as well as a class-leading LTE modem.

The Cat 18 modem offered in Kirin 970 allows for speeds in excess of 1 gigabit per second (1.2Gbps to be precise), as well as 150Mbps upload speeds. It should also be set to support a wide range of LTE bands, encoding methods and carrier aggregation. 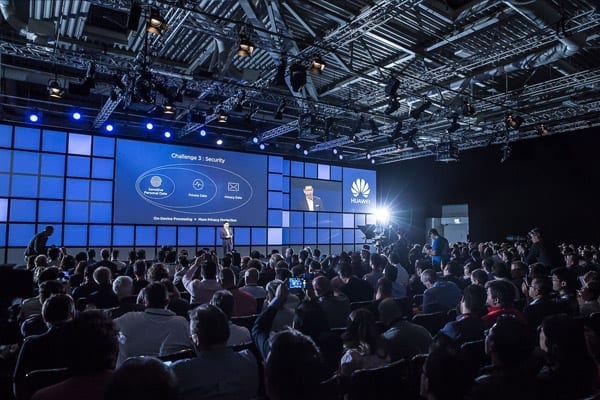 Obviously 1.2Gbps is never going to be real-world, but with actual speeds on a live network able to top 800Mbps with a Cat 16 (1Gbps) device today, there’s a chance that, depending on the network you are on and where you are, you may get a bit closer to the magical gigabit mark.

This will of course also speed up any ‘You’ve nearly run out of data’ alerts you may have set up, but recently there has been a move towards higher data allowances on handset plans, with 40, 60 and 100GB plans being launched in the UK.

Networks are clearly realising that if you offer higher speeds on devices with bigger screens, sometimes with 4K displays or HDR support, you’re certain to increase data consumption. And that’s even before looking at the needs of business users buying such phones.

But what of the Artificial Intelligence stuff? Is it real, or just a company making the most of the buzzword of the moment?

Huawei CEO, Richard Yu, took to the stage at IFA in Berlin to talk about his vision for AI, that would ‘combine the power of the cloud with the speed and responsiveness of native AI processing’. Kirin 970 will come with a dedicated Neural Processing Unit (NPU) that can offer 25x performance improvements, and 50x greater efficiency.

We’ve all seen how impressive machine learning can be used to sort photos into categories automatically, based on the image content and without the need to tag locations or faces. In the future, handsets should be able to do a lot of these things on their own, making apps more powerful and reducing the time to do such tasks considerably.

AI functionality can also be improved with enhanced sensors to better learn what’s going on in the environment, speed up communication between other devices (helped by the lower latency offered by the latest advances in 4G), and no doubt further improve the technology Huawei introduced on the Mate 9, P10 and Honor 9, which better predicts usage as time goes on, so as to optimise memory and apps automatically.

Huawei’s various optimisation tools promise to keep phones running like new even after months of uptime, and in my experience this is no gimmick and a genuine benefit.

And now, ur very 1st look at #HuaweiMate10 (360 video + dimensions based upon factory CAD) on behalf of @compareraja https://t.co/SncijNHZah pic.twitter.com/EfEVmPHkzQ

Power consumption will also be improved with the 10nm advanced process for the Kirin 970 chip, and hopefully the Mate 10 will still come with a decent sized battery, meaning the combination could spell a shift change in battery life. Huawei has already hinted at this in teasers for the new flagship.

Naturally, Huawei is going to big up its new chip and it’s impossible to verify the accuracy of any claims until there’s a real device to test, but with appetites now whetted, the countdown to October 16th has begun and I look forward to seeing if the Mate 10 is going to be as impressive as the hype suggests.

Additional: Qualcomm isn’t going to be far behind

It’s great to see a 4G battle that shows no signs of calming down anytime soon. It’s pushing chipset makers to release faster modems, and encouraging networks to compete to become the fastest. Their desire to ‘show off’ is all good for us consumers and perhaps doing more to enhance our 4G networks than any regulator could.

At a recent EE Gigabit LTE event in the UK, Qualcomm explained the benefits to both the consumer and operator, including customers who don’t even buy a new device. For once, everyone is a winner.

Just as Huawei is a matter of weeks away from launching its new flagship, Qualcomm has been bragging about what it will soon have to offer from its new modem that will almost certainly appear in a number of new devices to be launched in early 2018, and in particular at Mobile World Congress.