2018 is the year that Sony Mobile hopes to get back into a game it once used to dominate. The XZ2 and XZ2 Compact introduces an all-new design language, banished bezels (well, partly) and some world-firsts thrown in for good measure.

There’s no arguing that for many years, every new Sony phone has looked very similar to the last.

It can now be argued Apple and Samsung are now doing much the same, and time will tell if they’ll suffer as a result, but it would seem a consumer upgrading every two years would rather like something new and fresh. Otherwise they may as well stick with their current phone, or switch manufacturer.

Move over ‘omni-balance’, and welcome ;ambient flow design’ with 3D glass and the movement of the camera sensor to the middle, a new rear-mounted fingerprint sensor and an all-symmetrical layout.

I was lucky enough to get an advanced look at the two new devices, the XZ2 and XZ2 Compact, as well as discovering that last year’s concept Ear Duo headset will now be hitting the streets as a real product.

The XZ2 is quite a step up in terms of specification over last year’s XZ1. Indeed, it’s more like the XZ Premium.

Both the XZ2 and the Compact variant (see below) utilise Qualcomm’s top-end Snapdragon 845 chipset, but with an added ISP unique to Sony for additional functionality.

The XZ2 retains the XZ1’s Full HD display but now gains HDR, as well as a 18:9 ratio to reduce, but not entirely eliminate, the bezels that made the Sony the butt of so many jokes over recent years.

It certainly is a marked improvement, and allows for the screen to be increased in size to 5.7-inches from the 5.2-inches on the XZ1, or 5.5-inches on the Premium.

HDR up-conversion is now available with the latest update to Advanced X-Reality, which will enhance the saturation and contrast of non-HDR content, even content streamed from YouTube or Netflix.

Capture the moment in 4K HDR

You can also up-convert content you’ve recorded yourself, although you won’t necessarily have to because the XZ2 is also the world’s first smartphone to record 4K HDR video natively.

The 19-megapixel camera (still a single lens setup) offers ISO 12800 for stills and ISO 4000 for video, but the excellent super slow-motion feature has been boosted from HD (1280×700 pixels) to Full HD (1920×1080 pixels). It still works in exactly the same way, but your creations will now look significantly better.

Up front is a 5-megapixel selfie snapper, with an enhanced 3D creator function that now works with the front camera.

With a simple wave around the head, you can now create your own 3D facial image for sharing online, including Facebook that recently announced 3D object support, or even using the data to make your own 3D print or sticker.

The phone will do an initial rendering for ‘local’ use, while the server can create a higher resolution 4K texture for printing in under ten minutes.

Qi charging is now a feature for Sony phones, and water resistance remains with an IP rating of 68.

The phone will be compatible with all existing Qi chargers, as well as its own offering that will ship alongside the new phones.

Another new feature of the XZ2 is Sony’s new Dynamic Vibration System that takes from a Sony Playstation dual shock 4 controller, with adjustable levels of vibration to react to whatever you’re doing on the phone – from playing a game, to watching a movie.

Software detects the right moment to vibrate, and by how much (but you can adjust the levels manually) so it will work as well during quiet scenes of a movie as it will when smashing down buildings in Angry Birds.

The stereo speakers are 20% louder too, with the addition of S-Force surround sound. As usual, Sony doesn’t scrimp on support for high-resolution/high-definition audio either. If you’ve owned any Xperia phone from the last few years, you’ll probably appreciate the quality of sound when using wired, or wireless, headsets.

Finally, I have to mention the connectivity which is, again, second to none thanks to Qualcomm’s latest 4G modem. Remember, Sony was first to launch a gigabit LTE phone last year with the XZ Premium.

The XZ2 once again supports gigabit LTE (1.2Gbps this time) with both 5CA (Carrier Aggregation) and 4x4MIMO.

Sony told me that it supports so many configurations that it will be able to work with more networks, meaning faster speeds for more users than other phones on sale.

The other information you’ll need to know is that the XZ2 comes with 4GB of RAM and 64GB of internal storage, in addition to a microSDXC card slot, dual SIM support (with the second SIM being the hybrid type, so you’ll get the second SIM or a memory card but not both), and a 3,180mAh battery.

Like Samsung’s upcoming new flagships, it seems battery capacities are once again down which sounds disappointing. Qualcomm may well be able to boast major performance gains with less power consumption, but I’ll always favour more juice however fast you can charge the battery day-to-day.

The battery life and general performance will of course have to be judged when the phone ships, which should be from the start of April with pre-orders opening up nearer the end of March.

I have to say that I love the idea of the Compact models, even if I am now a fan of the larger screened models.

I have said for many years that smaller phones shouldn’t mean low-rent processors, cut down cameras and cheaper build materials.

Although the XZ2 Compact has swapped glass for a polycarbonate finish on the back, it still retains strong structural stability and most of the features of the flagship.

That means the same processor, with the same amount of RAM and storage, the same camera, the same high-resolution audio support, the same boosted stereo speakers with S-Force surround sound, and IP68 water resistance. 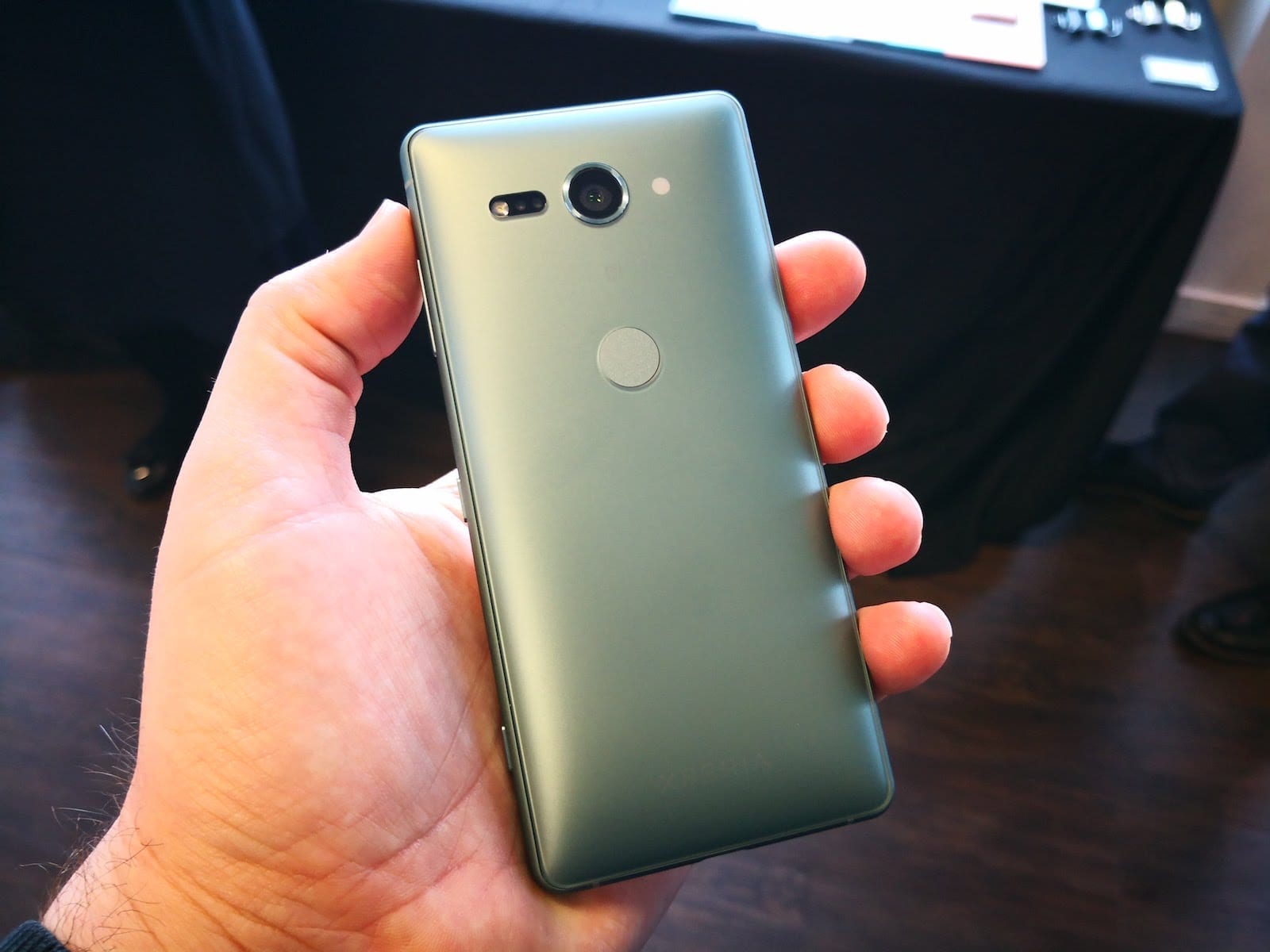 What is missing is the Dynamic Vibration System, but the display remains the same Full HD+ resolution (again, a 18:9 ratio screen and up from the HD 720p screen on the XZ1 Compact) with HDR, while the camera also records 4K HDR content as its larger sibling.

The upgraded 3D creator remains, and the battery is only slightly reduced in capacity to 2,870mAh. There’s no wireless charging support, however.

Most of the connectivity is identical too, but with only Cat 15 LTE and 4CA (carrier aggregation) this time, for download speeds of up to 800Mbps. For most people, that’s still perfectly adequate and in many cases unattainable in most locations anyway.

Overall, the missing features shouldn’t really impact much and although the phone is quite heavy at 168g and pretty thick at 12.1mm (full dimensions; 135x65x12.1mm), it feels nice in the hand. The curved design gives it an almost pebble-like feel, and the weightiness didn’t seem out of place with something that feels quite substantial.

As someone who can remember when a 5-inch screen was considered ridiculous, it’s somewhat ironic that it is now called ‘compact’ but with the 18:9 ratio and reduced bezels, the phone is barely any bigger than the XZ1 Compact. It’s also smaller than the iPhone 8, to add further context.

Getting to know you better

Some of the new features might seem a little confusing, daunting even, for customers so Sony has an updated assistance service that introduces new features to users as time goes on.

For example, a feature like the Dynamic Vibration System will be turned off and offered as a ‘why not try this?’ option within a few days of use. It then allows Sony to explain what the feature is and explain how it works.

Additional tutorials and tips that can be downloaded over the air as time goes on, and firmware updates add new features.

From the get go, Sony will be offering a range of accessories including a Style Cover Touch windowed cover, Style Cover Stand (to stand the phone up and automatically turn on/off), as well as a Qi Wireless Charging stand that can be adjusted to charge the phone in portrait or landscape modes.

It was here that Sony also revealed that the Ear Duo concept from last year is now going into production. The ‘open ear’ audio technology let’s you listen to music and receive notifications without being cut off from the outside world.

You will be able to hear environmental sounds or conversations, and use head movements to control audio. Multiple microphones enable beam forming to ensure the earpieces will hear your voice even in the loudest environment to speak to voice assistants, or merely to be heard during conversation.

Adaptive volume control will also adjust the volume when you change environment from somewhere loud to quiet, or vice versa.

The earpieces are charged when placed in their carry case, with the internal battery able to charge around four times. Each charge offers 3-4 hours of music playback.

Pricing, Availability and a look to the future…

No prices were given at our pre-briefing, but neither model is likely to be cheap even if there were hints of another model to come at the press conference today as part of an ‘innovation preview’.

The new dual-camera technology, utilising a ‘Fusion Image Processor’ will offer class-leading low-light photography with a staggering ISO12800 for video and ISO 51200 for stills.

No more information was given about when this new camera technology would arrive in a phone, but it does definitely point to a XZ2 Premium or Pro model at some point in 2018.

What other benefits the flagship will bring is unknown (a safe bet is another 4K display), but it could perhaps reduce the bezels further to increase the screen size, as well as incorporating more RAM, storage, or a larger battery.

But for now, Sony will be concentrating on these two new models and hoping that it reignites interest in Xperia smartphones.