Amazon doesn’t hide the fact it sells devices designed to hook you into its retail-focussed ecosystem, but has it tried too hard with the Fire Phone announced today?

The Fire Phone is the first smartphone from Amazon. Like the tablets, and the recently announced Fire TV, it hooks you in to using Amazon services rather than the usual Google services on ‘ordinary’ Android-based devices, and this time around it’s easier than ever before to buy things using the new Firefly button.

With the dedicated key, you can take a picture of anything you see, and it will be listed to look at later (and possibly buy). Music you’re listening to, or the film you’re watching – one press and it’s saved for you to look up later. Sort of like a wishlist button almost. 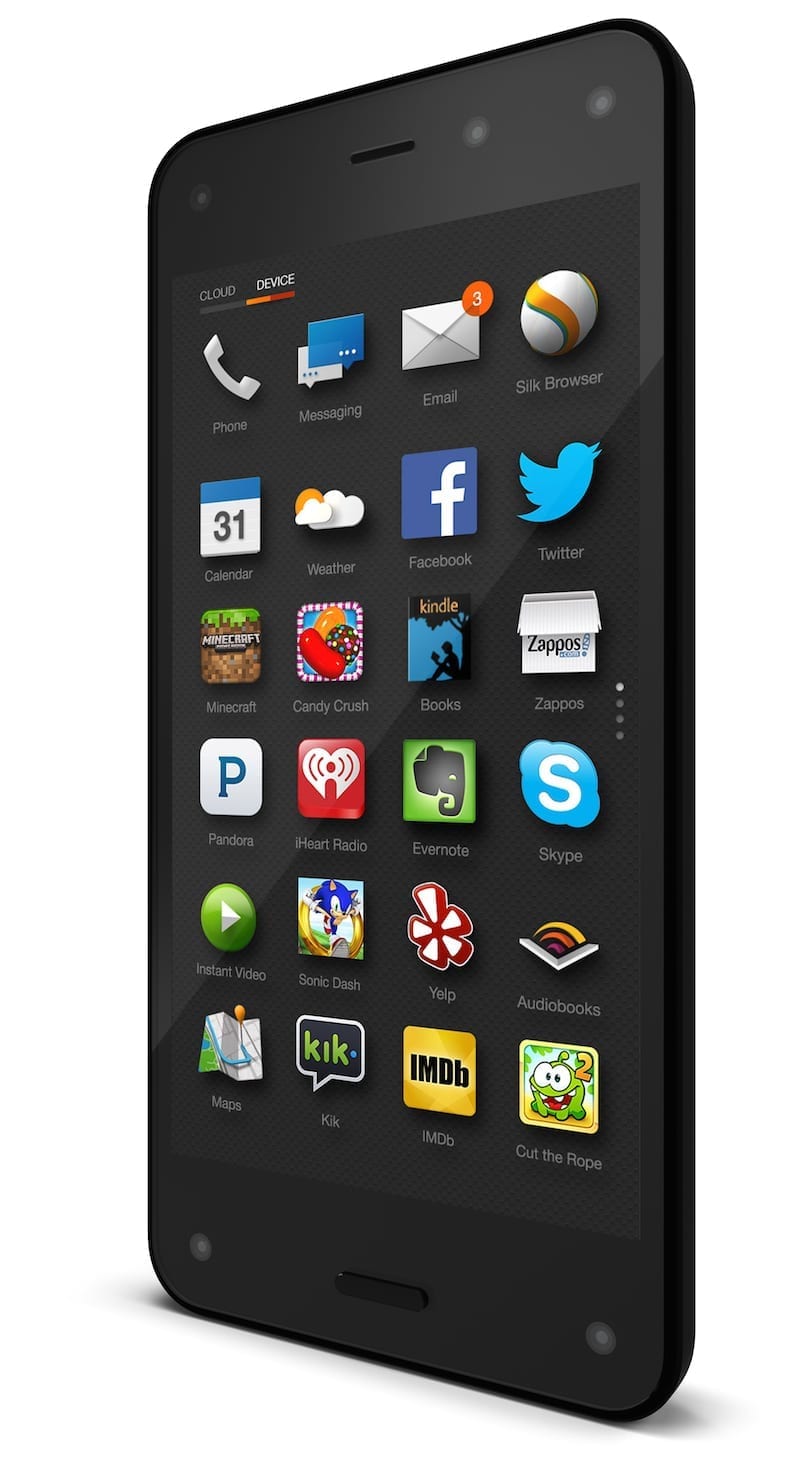 The eyes have it

So as not to be seen as something purely to make you spend more money with Amazon, you can do other cool things with it fortunately. Like read text from signs and posters, or look things up on Wikipedia.

Nothing Google Goggles and a range of other apps can’t do, but this is built-in from day one and available to everyone as a result.

Think about it, who would download an app like Goggles if they didn’t know such a thing existed? That and services like Mayday, which gives you help from a real live person you can see on-screen, are incredibly clever ways to make technology less scary – and get more people using services that are currently not widely known about.

Take a look around

All of this clever stuff is accompanied by four cameras on the front to give some fancy 3D effects to apps. First its own, and later to other apps thanks to the SDKs being made available to developers.

Whether developers will be rushing to support one device is another story, however.

To me, it seems like a gimmick that has little long-term value. When Apple introduced parallax effects on iOS 7, it was quickly copied and replicated on Android. Tilt your phone in various directions to watch a wallpaper move in a 3D-like environment, for example.

The novelty soon wore off. The live wallpapers consumed more power than it was worth, which raises another possible issue. What impact will these cameras have when having to analyse the movements of people?

And why is this so much better than just tilting the phone, or using gestures? Or indeed, why is this a feature that people want at all?

Perhaps in the gaming world it will work wonders, but developers play the numbers game and it’s far safer to stick with iOS and Android than a single device that may or may not sell in large numbers.

When Apple adds such technology to an iPhone, or it appears on a new Samsung or Sony phone, maybe it’s time to take notice.

The Amazon Fire Phone is only on sale in the US. But, hey, that’s how it worked for the tablets and Fire TV, so that in itself isn’t a big deal. But an exclusive with AT&T?

How many people will have seen the announcement and now thought, no. That’s not for me. All because of it being tied to one single carrier.

And what’s more, this phone isn’t being heavily subsidised and sold at a price more akin to that of a Moto G. In fact, it’s not clear if you’ll be able to just go onto the Amazon site and buy it SIM-free, then have the freedom to choose how and where you use it.

Until now, Amazon has been willing to sell devices at cost, or even a small loss, to get people to embrace the ever expanding range of services. 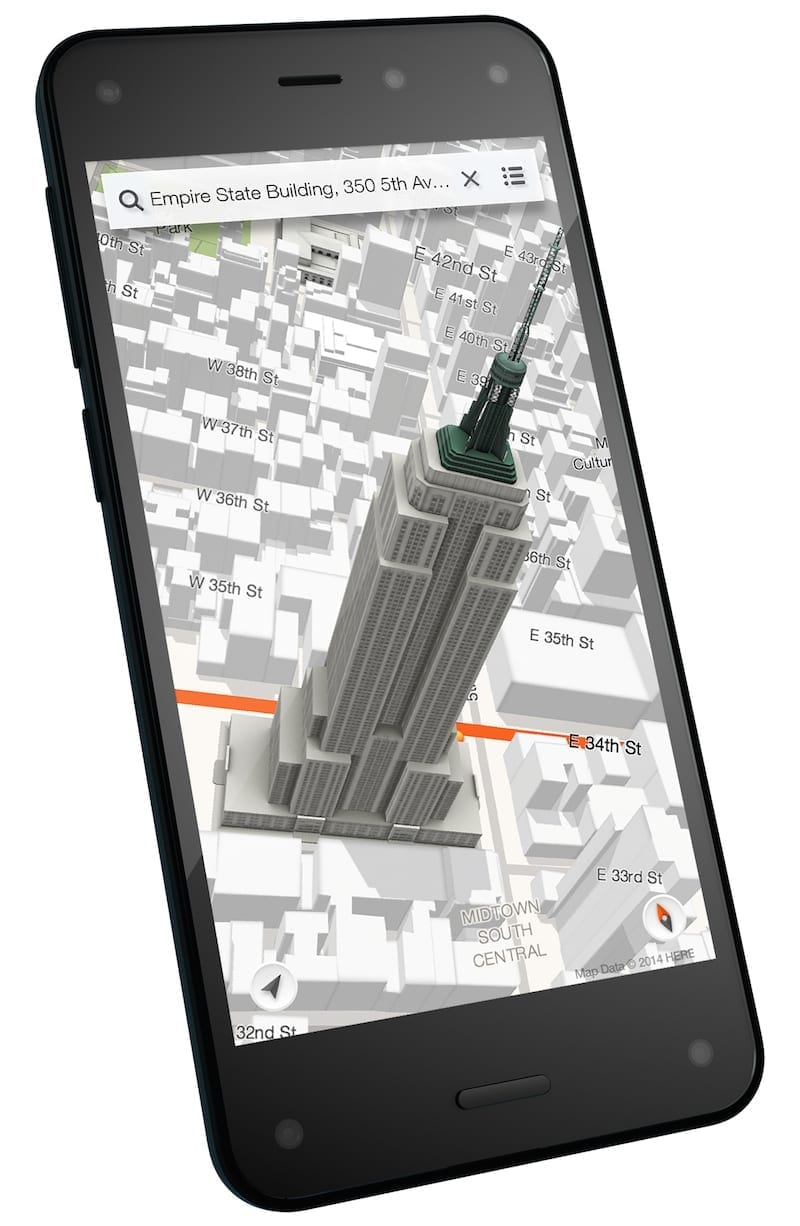 But perhaps this time around, Amazon thought it could try and make some money. Given the very high specification of the phone, it’s a perfectly valid idea – in theory.

But in my opinion, it’s only going to prevent the company getting the much-needed sales numbers to get support for the ‘Dynamic Perspective’ features and entice people away from other platforms.

I’m a massive Amazon customer, buying possibly far too many things simply because of how easy it is. It’s never been easier to use Amazon, as even not being at home during the day is no barrier with collection points dotted all over the country.

Yet I don’t need an Amazon phone or tablet, or Fire TV, to spend money with Amazon. I can use the Amazon app on my preferred smartphone (Android, iOS, Windows or even Tizen), or go to the website on a desktop.

I can enjoy Amazon Prime Instant Video on my Smart TV, and would be able to do so on my Android devices if the company let me. It chooses not to, of course, to try and tempt me away. But the thing is, I am not tempted away. I simply don’t watch Instant Video much as a result, favouring Sky or Netflix instead.

I’m a big fan of Amazon Prime, and signed up for the free next day delivery. I was somewhat upset when the price was hiked up, as I didn’t really want its TV, film (and now music) services. But if Amazon can make these services more accessible, then it has to be better than trying to get me to buy one of its devices.

Primed for a great deal

If Amazon was really clever though, it might have thought to offer the phone for free when signing up for Prime for 24 or 36 months – even possibly upping the price still further.

Jeff Bezos was keen to brag about the people who sign up for Prime not cancelling, so that could have been a great way to get this phone in the hands of millions. People who will get the phone as part of a long-term deal that nets Amazon a small fortune, and makes people now feel there’s no need to buy anything else when they’ve got a ‘free’ phone.

What we got today instead was an announcement of a phone that is heavily limited in its release, and will quite likely be passed over by many in favour of the very offerings on the market that Amazon is hoping to kill off.

I can’t see that happening, at least not for some time.

SEATTLE–(BUSINESS WIRE)–Jun. 18, 2014– (NASDAQ: AMZN)—Amazon today unveiled Fire, the first smartphone designed by Amazon. Fire is the only smartphone with Dynamic Perspective and Firefly, two new breakthrough technologies that allow you to see and interact with the world through a whole new lens. Dynamic Perspective uses a new sensor system to respond to the way you hold, view, and move Fire, enabling experiences not possible on other smartphones. Firefly quickly recognizes things in the real world—web and email addresses, phone numbers, QR and bar codes, movies, music, and millions of products, and lets you take action in seconds—all with the simple press of the Firefly button. See what people are already saying about Fire at http://www.amazon.com/Fire-Phone-Customers.

“Fire Phone puts everything you love about Amazon in the palm of your hand—instant access to Amazon’s vast content ecosystem and exclusive features like the Mayday button, ASAP, Second Screen, X-Ray, free unlimited photo storage, and more,” said Jeff Bezos, Amazon.com Founder and CEO. “The Firefly button lets you identify printed web and email addresses, phone numbers, QR and bar codes, artwork, and over 100 million items, including songs, movies, TV shows, and products—and take action in seconds. We invented a new sensor system called Dynamic Perspective that recognizes where a user’s head is relative to the device—we use it to offer customers a more immersive experience, one-handed navigation, and gestures that actually work. And this is only the beginning—the most powerful inventions are the ones that empower others to unleash their creativity—that’s why today we are launching the Dynamic Perspective SDK and the Firefly SDK—we can’t wait to see how developers surprise us.”

Starting today, Amazon is introducing the Dynamic Perspective SDK that enables developers to build new experiences with this groundbreaking technology. Learn more about the SDK at http://developer.amazon.com/firephone.

Fire seamlessly integrates Amazon’s vast digital ecosystem for instant access to over 33 million songs, apps, games, movies, TV shows, books, audiobooks, and magazines, including thousands of exclusives. Plus, Prime members get unlimited streaming of tens of thousands of movies and TV episodes at no additional cost with Prime Instant Video, over 500,000 books to borrow with the Kindle Owners’ Lending Library, and the all-new Prime Music—unlimited streaming and download of more than a million songs and hundreds of expert-programmed playlists—all at no additional cost.

Fire ships on July 25 and is available exclusively on AT&T—the nation’s most reliable 4G LTE network. Starting today, customers can pre-order Fire at http://www.amazon.com/Fire-Phone, http://www.att.com and in AT&T retail locations nationwide. Fire with 32GB is available for $199 with a two-year contract—that’s an extra 16GB of memory for the same price as many other premium smartphones—or zero money down for as little as $27.09 a month from AT&T on Next 18. Fire is also available with 64GB for $299 with a two-year contract or starting at $31.25/month from AT&T on Next 18.

Starting today, customers can take advantage of an introductory, limited time offer—buy Fire and get 12 months of Amazon Prime included—FREE Two-Day Shipping on millions of items, unlimited streaming of movies and TV shows with Prime Instant Video, unlimited, ad-free streaming and downloading of over a million songs and hundreds of playlists, and over 500,000 books to borrow from the Kindle Owners’ Lending Library. Existing Prime members get an additional 12 months added to their account.