I knew that having been in the game for so long would pay off eventually, as I finally got a hands-on with a device I’ve longed to see for almost 20 years!

The new Gemini PDA, from Planet Computers, is the spiritual successor to the Psion Series 5 organiser from the late 1990s*; A Personal Digital Assistant that I swore by, using it to write copy for newspapers and magazines, and also for communicating on bulletin boards, via a modem connection over Infrared to various phones.

(* Technically Psion went on to produce the Revo and the Series 7 lines, but these each went into different directions and the Series 7 attempted to take on laptops with little success and soon after that was pretty much it for the company as far as consumers were concerned.)

Frankly, I’m quite amazed what I put up with to get online all that time ago, but while there were other products on the market, the Psion was my firm favourite because of one thing: its awesome keyboard.

We’ve had no shortage of pocketable devices released in the last 20 years that have offered keyboards of their own, most notably from BlackBerry, but many have been pretty close to unusable, often comprising a series of clicky buttons that need prodding and means you can forget about touch-typing at any acceptable level of speed or accuracy.

None has come close to replicating the intuitive keyboard of the Psion, that sprung up when you unfolded it, and even perched itself at an angle to put the keys at the ideal angle for typing, just like an ordinary desktop keyboard. 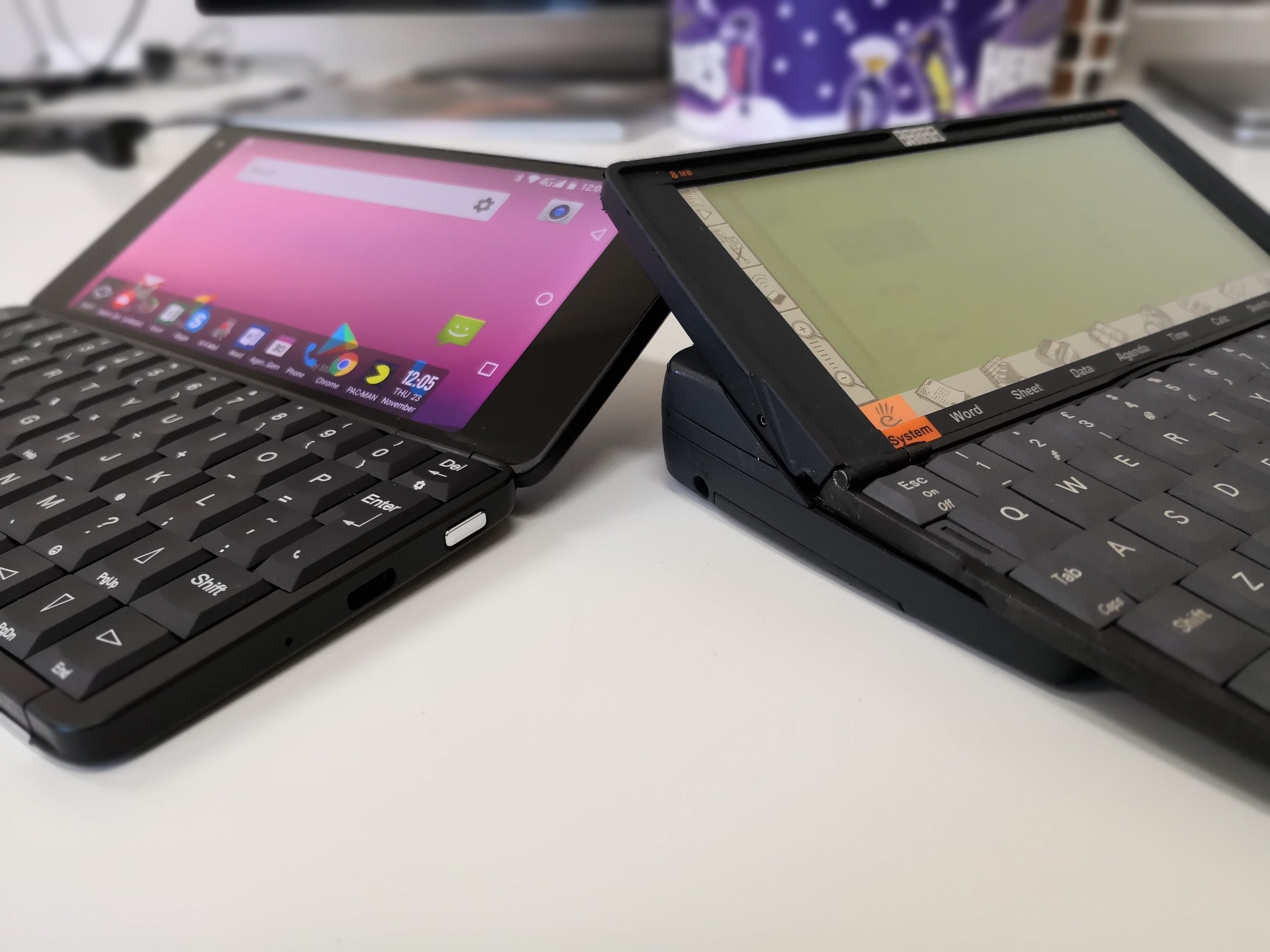 Even the angle of the screen in the unfolded position lended itself perfectly for working in confined spaces, like a train or plane seat-back table, and the new Gemini PDA retains both innovative features.

Out with the old, in with the new

The Gemini PDA is an all new device that has modern specs, but retains the original keyboard design. Not a lookalike, but the same tech that made it so uniquely comfortable to type on.

The rest of the specs are a world apart, from the 6-inch 18:9 ratio FHD+ display that has 2160×1080 pixels instead of the 640×240 pixels on the original, 4G and Wi-Fi connectivity (a Wi-Fi only model is also available at a lower price), dual-booting for both Android (Nougat) and Linux (Debian), two USB-C ports for connecting external hardware, hubs, or outputting to a monitor, and a 4220mAh battery to make sure you should get a decent level of usage from it, whether using it as a primary or secondary device.

There are stereo speakers too, a voice control button, and a 3.5mm headphone socket. Inside there’s a 5-megapixel front-facing camera designed primarily for video calling, while an optional rear camera (5-megapixel) can be fitted by changing the rear casing.

The idea for the device started earlier in the year as an Indiegogo crowdfunding campaign, which quickly raised all the required funding, and then some, before getting further support when the original founder of Psion, Sir David Potter, got onboard and became honorary president – and also invested a bit more too. 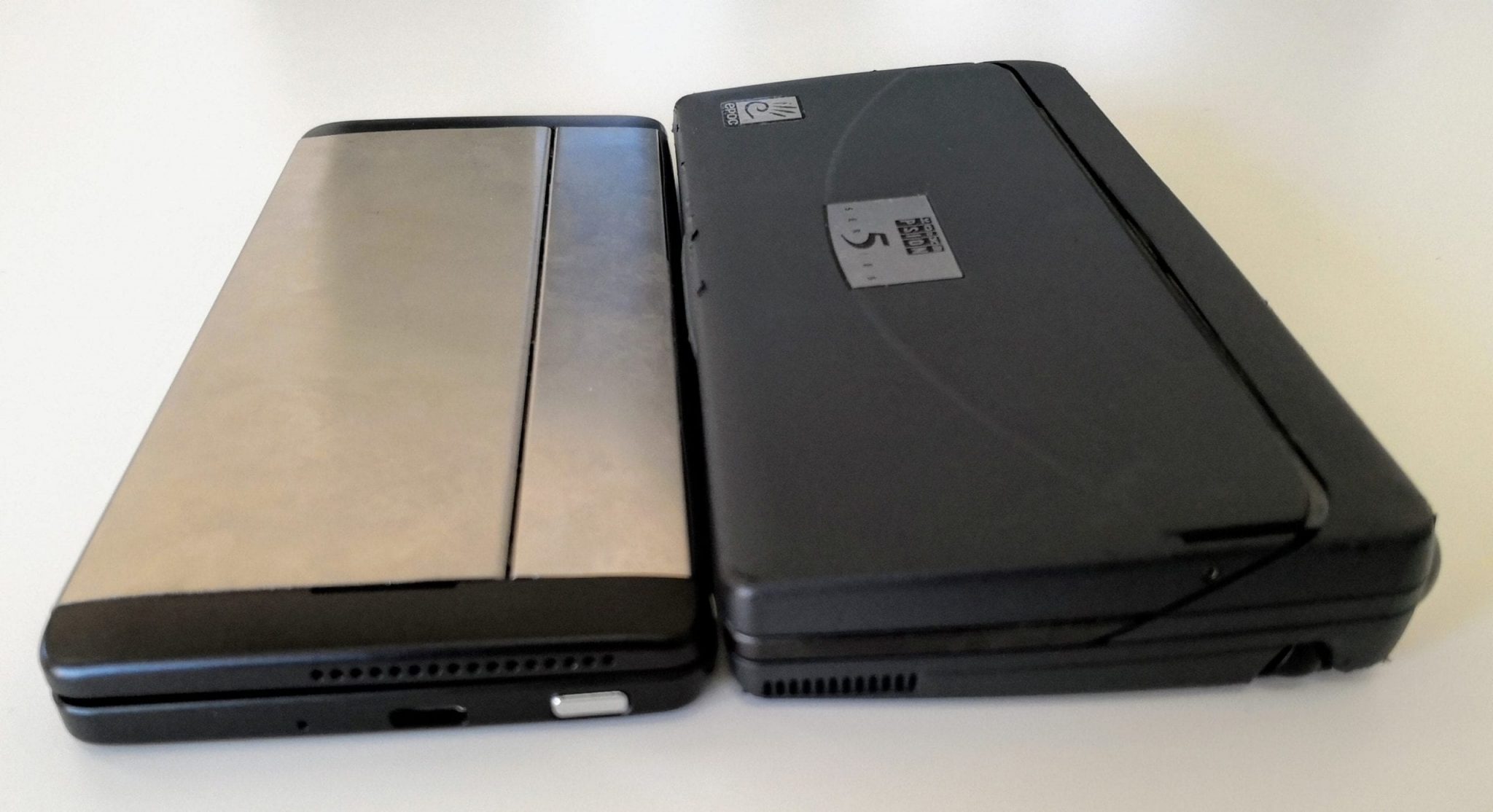 Having the ability to switch between Android (Nougat for now, Oreo coming later) and Linux gives you a great deal of flexibility, especially as you can also opt to run Linux as an app within Android to save dual-booting.

In Linux mode, you get a higher DPI setting to fit more information on the screen, which especially pays off when hooked up to a monitor. The Android mode will simply output a mirrored screen image, although I was told they might look at offering a different display output in a future software update. 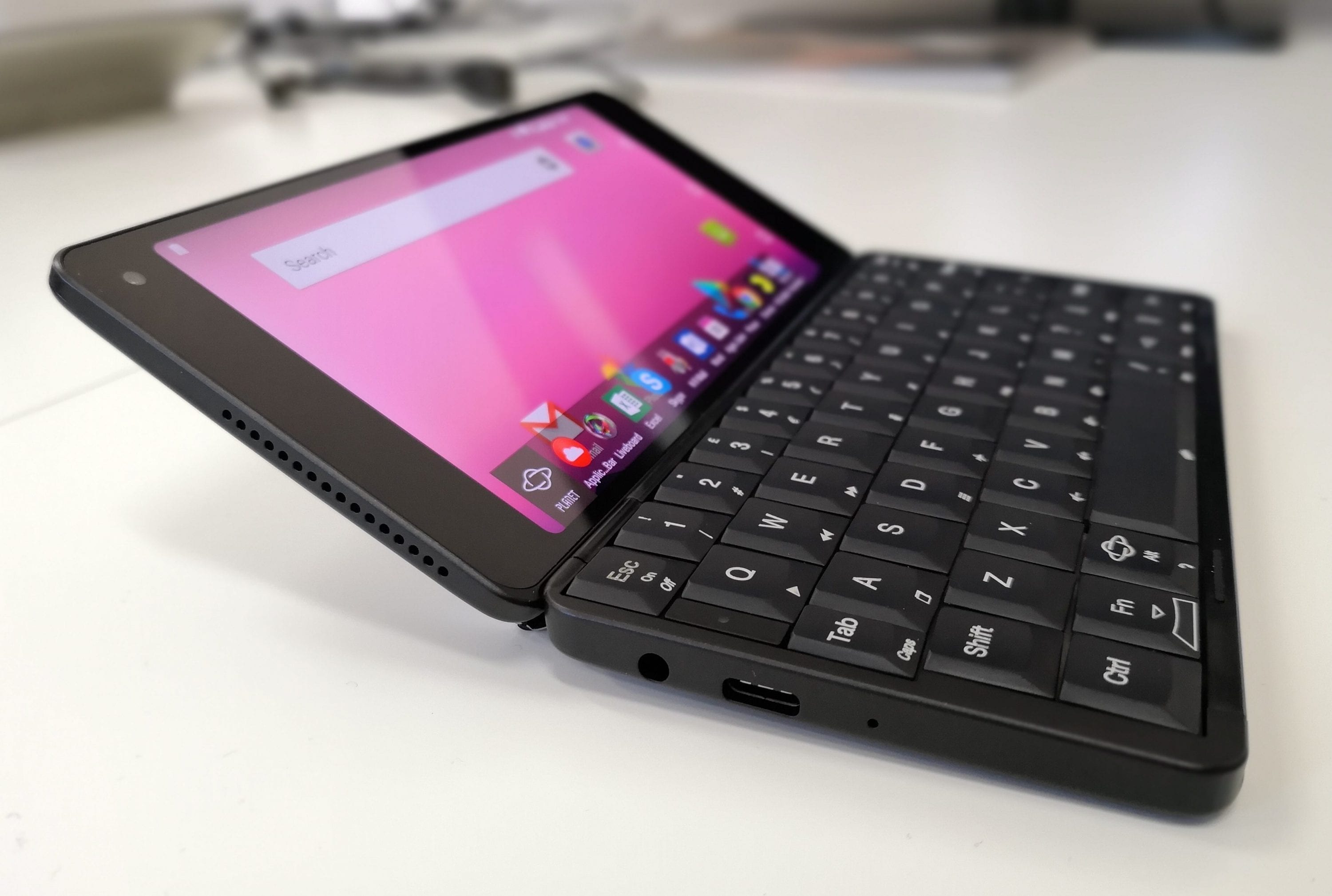 The choice of a MediaTek 10 ARM-core chipset (Helio X27) gives the Gemini PDA plenty of grunt (a significant leap from the single core 18MHz ARM chip on the original or the 36MHz version on the later Series 5mx), although it could be argued that most users aren’t as likely to be after the absolute fastest possible performance, as much as they will want the best hardware for being productive.

While only using a non-final prototype, I was able to jump between key apps like Word, Excel and WordPress, knowing that I could easily see myself using it to cover any product launch or conference with ease, being able to write copy on the go, edit photos and much more, without ever pushing the device to its physical limits.

Even video editing is on the table with cloud-based services like WeVideo, making this a viable alternative to a laptop for many. 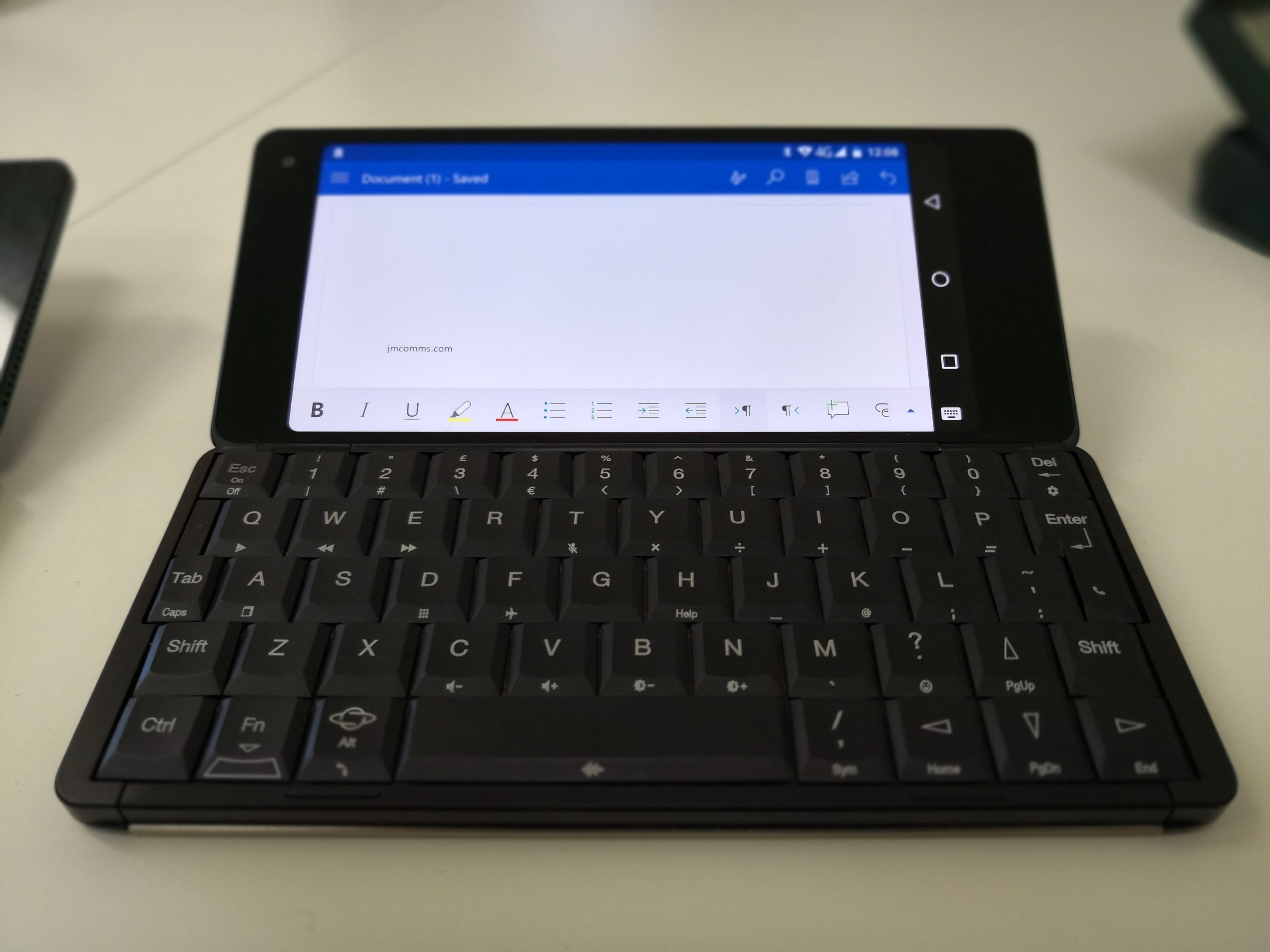 One of the nice features of the original Series 5 was the fixed shortcuts to key apps printed underneath the display. Of course that limited customisation, and on the Gemini PDA the dock has been put on-screen instead, accessed via the keyboard.

The virtual dock can be customised however you want, and remain visible at all times or be hidden automatically to maximise screen space.

Many more shortcuts are available via the keyboard, in keeping with that of the original, allowing easy access to the dock, the desktop, adjusting screen brightness, volume and pausing and playing music etc.

The original Psion had a Compact Flash slot and up to 16MB of internal memory (effectively with no actual storage, using a backup battery instead to prevent data loss when closed), while the Gemini has 4GB of RAM, 64GB of flash storage and a microSD card slot to expand more.

There are two SIMs on the 4G model, with the second being eSIM ready (more on that below), and Wi-Fi connectivity comes in the form 802.11a/b/g/n and ac.

4G data tops out at 300Mbps down and 150Mbps up (LTE Cat 6), while the device is also noted as being VoLTE ready, although whether that means support for any of the UK networks remains to be seen.

The USB-C ports can be used for input and output, allowing you to hook up external storage, connect USB accessories out output the screen to a monitor. Fast battery charging is also available using MediaTek’s own fast-charging system, with a fast charger included in the box.

And that takes me back to the battery, which has been custom designed to best fill the available space in a device that’s just 15.1mm thick, despite the keyboard. A larger battery was considered but it then ran the risk of falling foul of new rules on flying, namely being categorised as a laptop and having to be stored in the hold on some routes.

That would clearly have been a disaster for something so well suited for being used on the plane.

With the various connectivity options available, Planet Computers has come up with an optional leather pouch that leaves all the ports free when stowed, as well as giving access to a voice control button that lets you speak to Google Assistant even when the device is closed.

When pressed you get a confirmation beep to let you know you can speak, and if you do decide to hook up via a hub to a monitor, complete with external keyboard and mouse, you can keep everything safely protected and ready to go in a jiffy by just removing one cable. 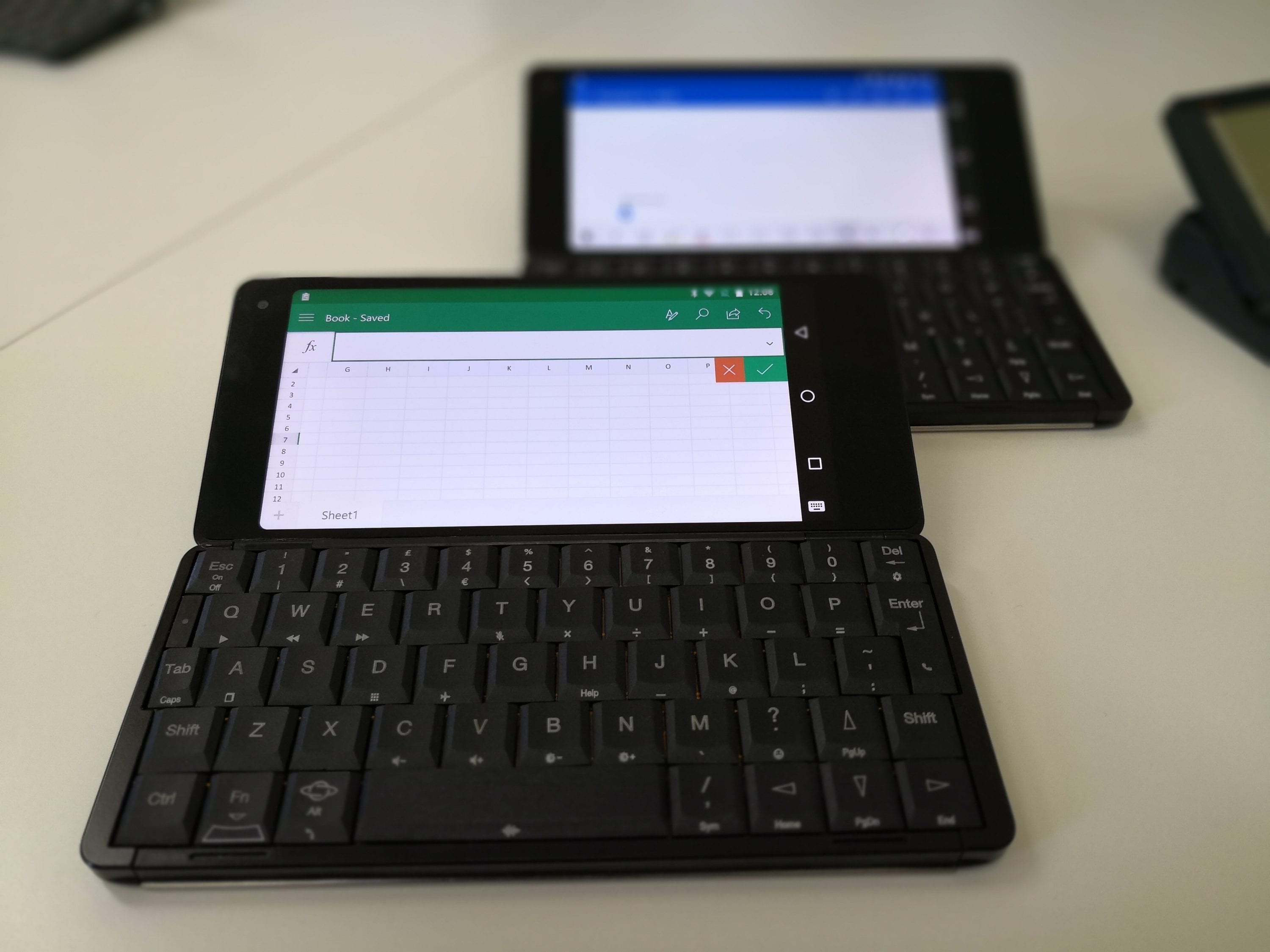 It’s a phone too!

Unlike the original, the Gemini PDA allows you to make calls too. Whether you will want to depends firmly on whether this is going to be your only device, or a secondary device with its own SIM.

With no external display, which would have added further bulk and cost, the device has a row of five programmable multi-colour LEDS instead. These can be programmed in near limitless configurations to identify callers, and they can be animated too. Suffice to say one of the examples I was shown simulated the front grille of KITT from Knight Rider.

It might seem rather nerdy, but things like this just reconfirm my belief that the whole project has been managed from day one by people who have the highest level of enthusiasm to produce a product as faithful to the original as possible, whilst obviously keeping with the times in terms of current-day expectations.

Personally, I couldn’t imagine myself using it as a primary device but it’s certainly good that the option is there. It’s more likely you’ll keep the device open and use the speakerphone, or video calling facilities, to speak to people, and after a quick Skype call as a demonstration, it seems perfectly set up for this purpose.

While the keyboard is without a doubt the primary reason for buying this device, it is by no means the only reason. In addition to having great keys, the fact it sits up at the right angle when unfolded, and has a great specification in its own right (keyboard or not), makes this a consideration for anyone that still can’t quite accept that on-screen keyboards, external keyboards, or even voice dictation is the future.

BlackBerry still offers up a range of pocketable solutions, but these keyboards are not really for large amounts of data entry. Nor has BlackBerry ever pretended otherwise.

The angle of the screen makes it ideal for cramped spaces, whether travelling or sitting on a rock hard seat at a conference. It’s also great for watching films with minimal glare, a feature that it’s pretty safe to say wasn’t even a consideration all those years ago when it was just 16 shades of grey.

Final production models should begin rolling off the production lines in early December, with a formal unveiling at CES in Las Vegas in the new year, just as mass production commences so it can go on sale shortly after, initially satisfying the orders from backers and then going on sale to all.

Price wise, Planet Computers was unable to give me UK pricing on account of currency exchange issues, but it did confirm the US pricing as $599 for the 4G/Wi-Fi model, and $499 for the Wi-Fi only version.

Hopefully it won’t be a straight dollar to pound conversion, and it could be nearer £549/£449 for buyers here. As soon as I know, I’ll update you here, and of course look out for a full review in the new year.

First impressions? Is it everything I hoped it would be, and something I’d want to carry with me for work? You bet your life it is!

Now all the company needs to do is make sure it can market itself to the masses to get the word out. Hopefully this post will play its part.

Any questions? Ask me below or hit me up on Twitter.