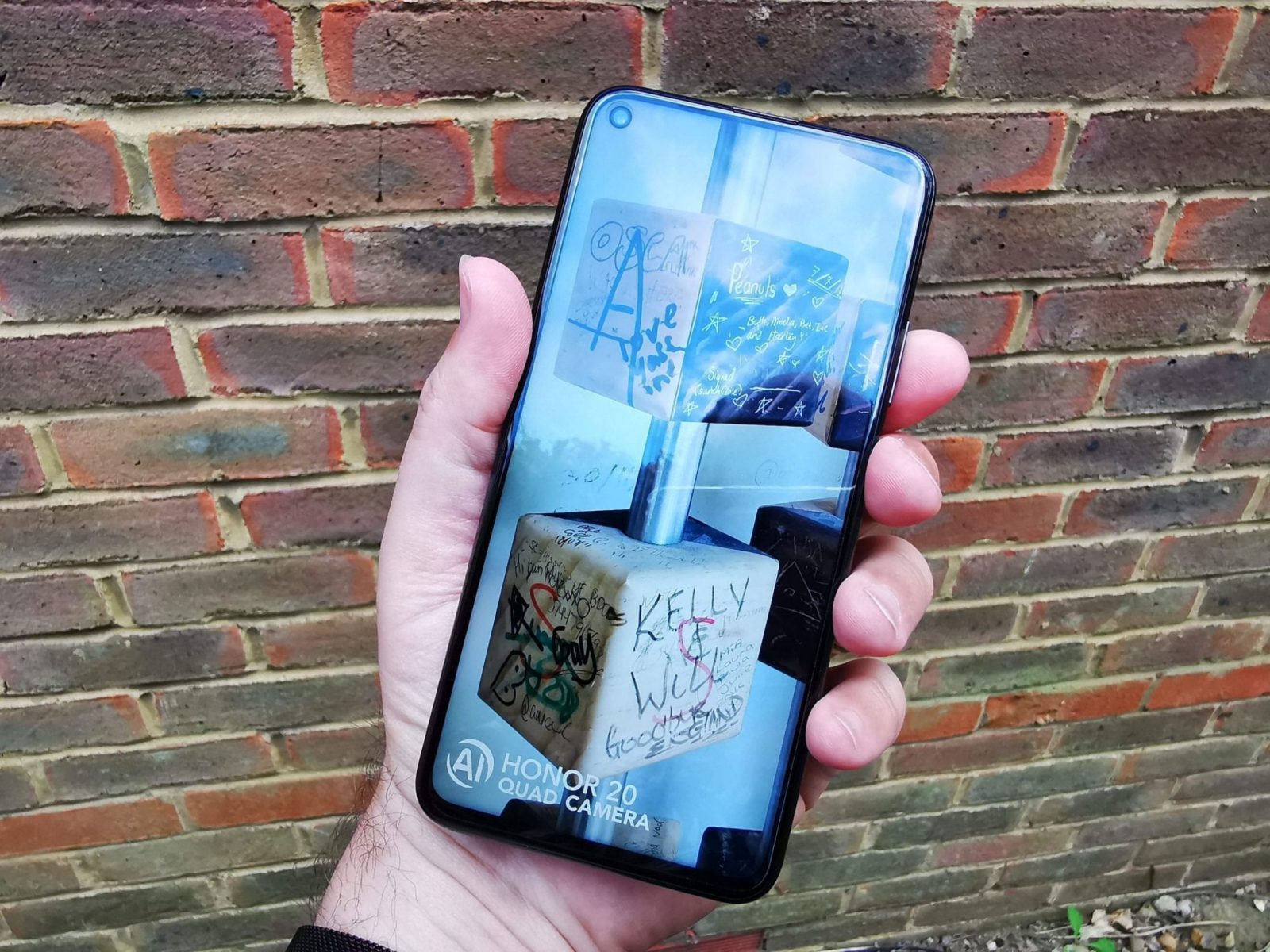 Honor’s 20 series launch event couldn’t have come at a worse time, but thankfully all three models are now available to buy in the UK.

The 7.9mm thick Honor 20 comes with four cameras, just like the Honor 20 Pro, but there are some significant differences to be aware of.

The Honor 20 has a 48-megapixel f/1.8 main camera, 16-megapixel ultra-wide camera, and two 2-megapixel cameras for depth-sensing and macro photography.

The Honor 20 Pro by comparison has a 48-megapixel main camera (with f/1.4 aperture, so better in low-light), 16-megapixel ultra-wide camera, 8-megapixel 3x telephoto camera and a 2-megapixel macro camera.

The Honor 20 unit I was loaned for my review was the midnight black model, which lacks the flair of the blue or white models, and certainly looks more understated than the two Honor 20 Pro models.

I’m sure there are occasions where you’d really rather not draw too much attention to the phone you’re using, so having a plain black model is no bad thing.

The case is particularly useful given the slight protrusion of three of the rear cameras and LED flash.

Up top you’ve got a microphone and Infrared port, while on the side are the volume keys and a combined power/fingerprint sensor as Sony once favoured on many of its Xperia smartphones, including the Xperia XZ Premium.

Having the fingerprint sensor on the power button makes perfect sense, but appears to have fallen out of favour of late. Sony has returned to the idea with the Xperia 1, 10 and 10 Plus but now with a separate fingerprint sensor and power key, which rather misses the point.

At the base of the phone you’ll find a USB-C port (the Honor 20 Lite still coming with micro-USB), a single down-firing speaker, and on the top left a SIM card tray for up to two SIM cards (the phone supporting dual 4G and dual VoLTE).

The LCD screen is a lot brighter than the entry level Honor 20 Lite, so is far more usable outdoors, although it still isn’t as bright as something like the Huawei P30 Pro. With our recent mini-heatwave and bright sun, I did find it a little tricky to see the display all of the time I used this phone but it wasn’t too bad in comparison to the entry-level phone that was near invisible.

When using the camera, you may have to partially shield the display to see what the camera is seeing, but it really is only an issue on the relatively few occasions we have such incredibly bright and sunny days.

As a continuation of what Honor produced with the View 20 at the start of the year, Honor has now added the additional cameras to add a great deal of functionality to the Honor 20.

It’s rather odd to have gone with a 2-megapixel camera for macro photography, but the results proved to be quite acceptable and perfectly fine for sharing on social media.

The jewel-in-the-crown is of course the Sony IMX586 48-megapixel image sensor that has not only been used by Honor for the View 20 (and the Honor 20 Pro) but also the OnePlus 7 Pro and many others (Oppo, Xiaomi, Motorola and more).

It’s an excellent image sensor that uses pixel-binning to combine 4 pixels to produce a single pixel, allowing for less noise in low-light and better contrast and sharpness.

Where it comes into its own is when you have sufficiently good lighting, or time, to let you take a full 48-megapixel image.

If the light is good, you can take a photo with no delay, while in anything but ideal conditions you can use the clarity mode that takes a series of shots in much the same way as the night mode works by combining shots at different exposure levels.

The dual neural processing units of the Kirin 980 chipset enables you to do all of this without needing a steady hand or tripod, and it’s perhaps a testament to what parent company Huawei has achieved in that not needing a tripod has now become the norm even on the cheapest models in the Huawei and Honor range.

The Honor 20 can record 4K video (at 30fps), 960fps 720p super-slow motion video and comes with a range of AR lens filters and effects.

There’s also the now obligatory Professional mode, with the ability to save RAW images for more detailed editing on a PC or selected Android apps that can work with RAW files.

With Huawei’s flagship chipset, along with dual-band Wi-Fi and fast 4G access, the Honor 20 gets you a lot of performance for its £399.99 pricetag.

Indeed, compared to the Honor View 20 at £579.99 it is quite the bargain given the extra cameras it possesses.

The View 20 also has a TOF (Time-of-Flight) image sensor that offers improved depth-sensing, body tracking and real-time motion capture – but few of these features have really taken off.

It seems the craze for TOF sensors has been rather short lived, at least until someone comes up with a ‘killer app’ that nobody can live without. One possibility is night vision, although there’s still quite a lot of work to do so I wouldn’t rush to buy a phone on the basis of a beta app.

The Honor 20 Pro comes out at £549.99 with 8GB and 256GB, plus the best camera configuration of all, so all of this does present you with a lot of choices to ponder over.

I really like the feel of the Honor 20 in the hand, although I also personally prefer the bigger screen of the View 20.

There’s no ‘one size fits all’ and you’ll have to decide what is most important. Camera functionality, screen size or how much you’re wanting to spend.

The performance of the Honor 20, complete with Android Pie and an update to Android Q coming later in the year, is up there with the best of what Honor (and Huawei) has to offer. There’s the GPU Turbo mode (V3) to get the most from games, and also a free Fortnite skin for avid fans.

The battery performed perfectly well, with 4-5 hours of screen-on-time achievable, and the phone has all of the same power management features that it seems unnecessary to go over again and again, given it is part of the core of the Emotion UI (or in this case, Magic UI) enhancements on top of Android OS.

The side-mounted fingerprint sensor is another positive feature that might help you make a decision.

The Honor 20 Lite at £220-250 is by far the cheapest model and offers a decent camera setup, and many of the features of the more expensive models (but an extremely dim screen).

If you’re on a budget then the Honor 20 Lite is a good phone for the money.

The Honor 20 is perhaps at the perfect sweet spot in terms of performance vs price, with a sub-£400 pricetag and almost all of the flexibility of the £550 Honor 20 Pro.

The View 20 can’t be ignored though, but it is the priciest model. However, there are occasional promotions that bring that hefty pricetag down considerably.

It may not have the extra cameras, but the primary camera is the one you’ll probably be using most often.

You also get a bigger screen that does, in my opinion, make a noticeable difference if you are into watching video.

Overall, the Honor 20 is an excellent compromise, giving a flexible camera experience and keeping a decent chunk of cash in your pocket at the same time.

I’m still to review the Honor 20 Pro and have no doubt it will perform better (I can say that with some authority having used it at and before the launch event), but at £150 more I can honestly say that you wouldn’t be disappointed with the Honor 20 unless you really need the telephoto capability and are willing to pay for it. 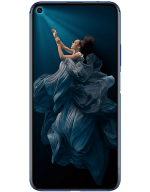