I don’t normally review Windows PCs, but felt I should make an exception here, especially as reviews of the Linx 10 Windows Tablet are surprisingly thin on the ground. In fact, the only one I’ve found so far is by PC Pro.

For those that don’t know, Linx has three low-cost tablets on sale, comprising 7, 8 and 10-inch screens, each running Microsoft’s Windows 8.1 with Bing. This is basically a version of Windows that hardware makers can chuck on a tablet without paying any licensing fees.

With costs reduced, it’s now viable to produce a tablet that might have otherwise only shipped with Android or another free OS. The idea is that Bing is set up as the default search engine, but there’s nothing to stop you changing it. Simply installing a browser like Chrome pretty much takes care of that.

Yet, even with the OS being free, these tablets are still extremely cheap anyway, especially with a 12-month subscription to Office 365 thrown in. That’s access to Word, Excel, PowerPoint, OneNote, Outlook, plus 1TB of cloud storage – for absolutely nothing.

There’s even a limited £50 cashback offer (check before buying that this is still operating) if you send back – at your own expensive – any old tablet. It must have at least a 7-inch screen, and be working, mind. 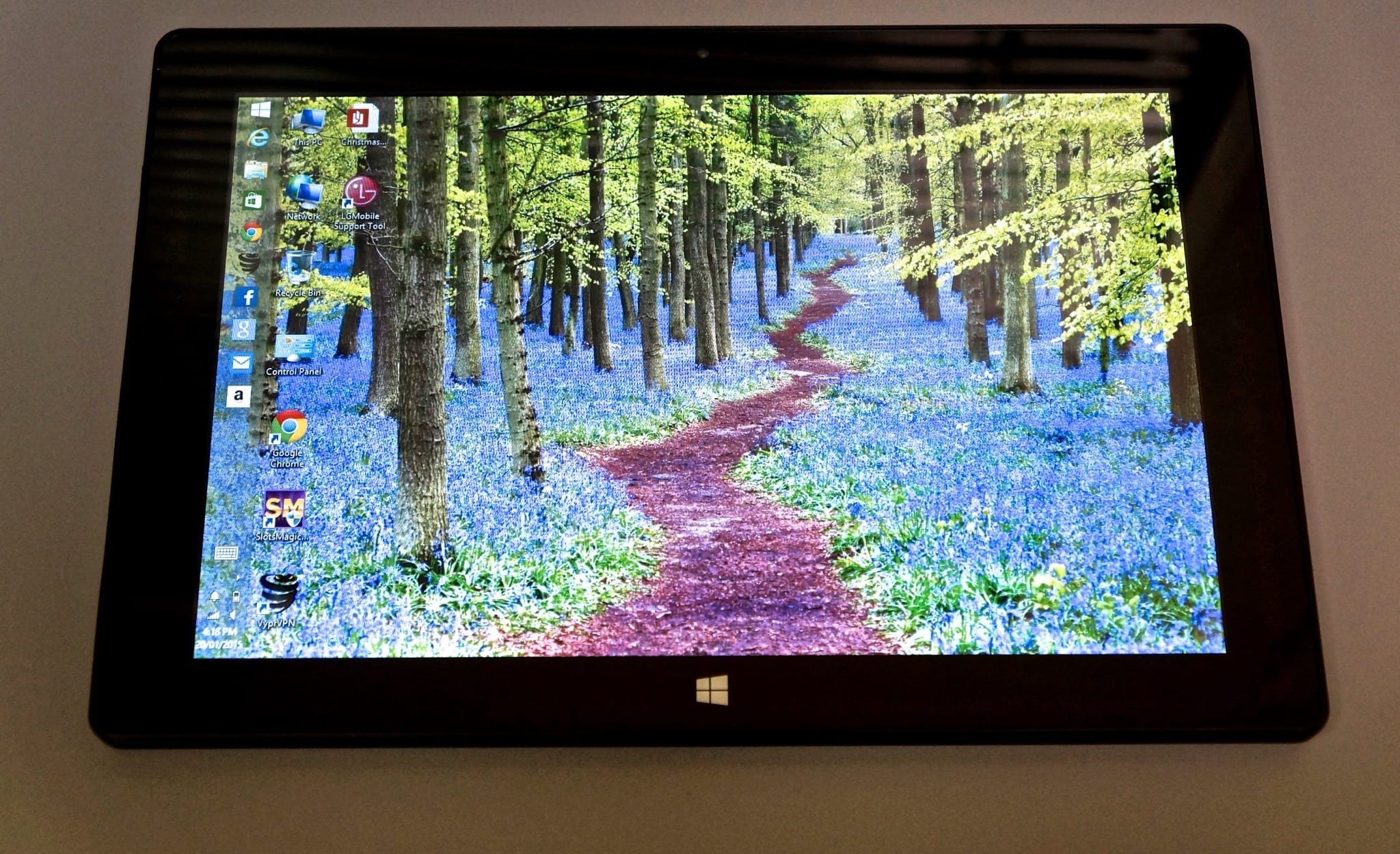 The Linx 10 is effectively a normal PC, in tablet form. No Windows RT rubbish here, and no limitations beyond having vastly limited ports over a normal PC. There are obviously some hardware compromises (see below), but as a tablet it means it comes with a touchscreen, unlike many entry-level laptops that come without touch at all, or as an extra cost option that bumps up the price further.

There’s also an optional clip-on keyboard/stand for the Linx 10 (bundled with some retailers, such as Argos, for very little extra). It even has an integrated touchpad (but no buttons, so you make selections via single or double taps). All things considered, it looks much like a Surface Pro 3 with the keyboard.

At this point, you’re probably choking on your coffee over my comparison of a £160 tablet with a Surface Pro 3 that starts at £639 and quickly escalates once you start upping the spec. Sure, hardware wise they’re a long way apart, but as someone who has had the privilege of using a Surface Pro 3, the differences aren’t as big for everyday usage as you might think.

To be fair though, let me point out the things you don’t get – as you may wish to stop reading if any of these things are major deal breakers.

Firstly, instead of a 12-inch 2160×1440 pixel screen, you get a more mundane 1280×800 pixel resolution display, but it is IPS and good to view even at an angle. It also has a very poor 2-megapixel camera (but does anyone care about cameras on tablets? They shouldn’t), slower 2.4GHz Wi-Fi with no 5GHz support at all (naturally that rules out 802.11ac support too), just 2GB of RAM, 32GB of internal storage (but with a memory card slot for additional storage), no GPS, and a slower SoC; Intel’s quad-core Z3735F CPU with a max (burst) clock speed of 1.83GHz. 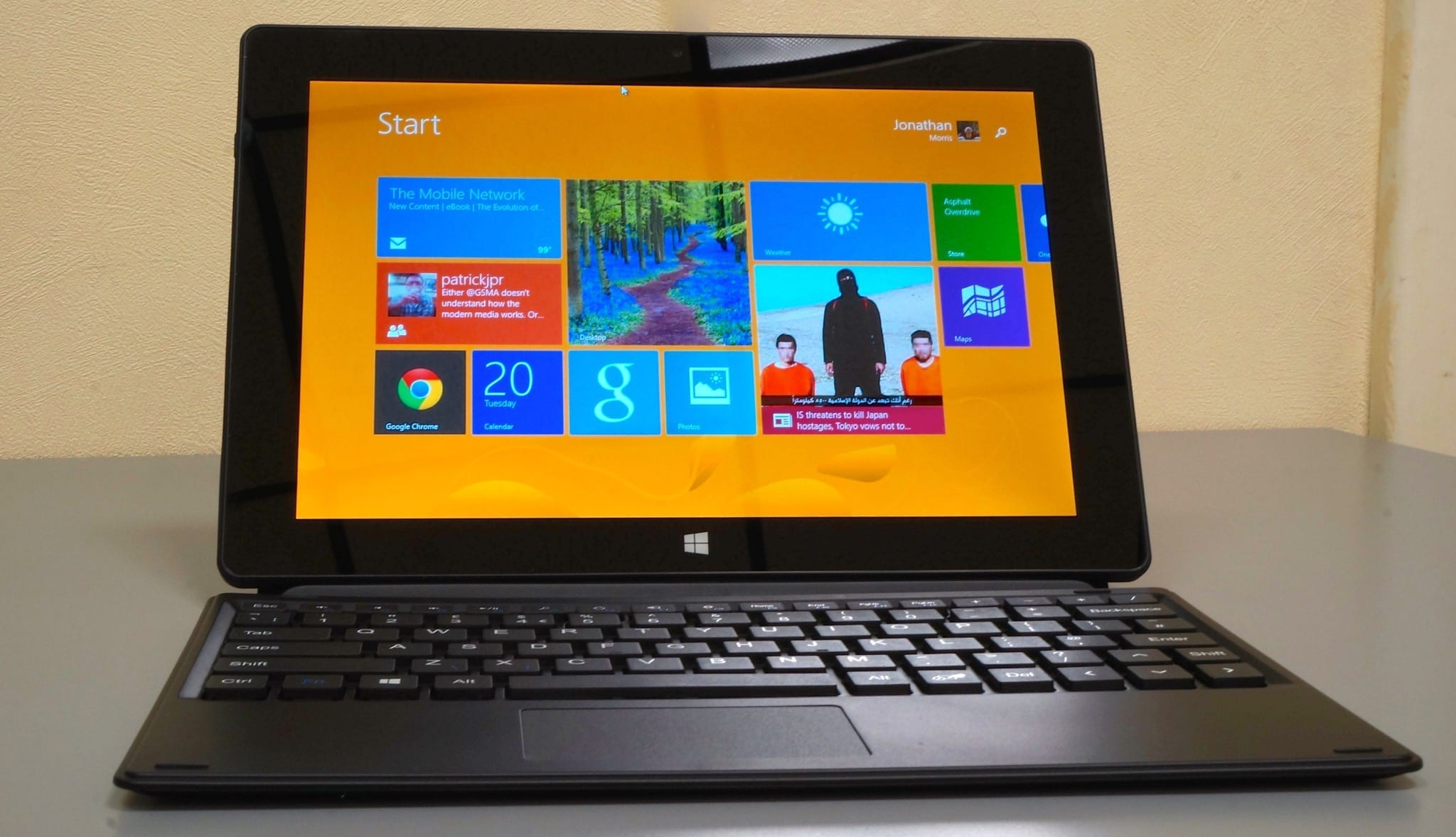 Still reading? I hope so, because even with all that in mind, the Linx 10 is still very powerful and doesn’t lag and stutter as I’m sure you expect it to. I know I certainly did before seeing one, which is why I felt compelled to write this in the first place.

I’ll excuse you for jumping to that conclusion, as you probably remember only too well what cheap PCs used to be like. Think of the netbooks that were once all the rage and, with few exceptions, were awful. Coming with a reduced-size keyboard, pathetically underpowered CPU, too little RAM, extra slow hard drive.. and, you get the idea; they were painfully bad.

Battery life was usually quite good, but given the time required to get anything done, you needed it. Suffice to say, I fully understand why people will be somewhat hesitant to buy another cheap PC.

But with the Linx 10, and no doubt other devices based on the same hardware, for everything but running powerful games, editing HD videos or working on those RAW images from your fancy DSLR, you’ll be hard pushed to tell the difference between this and a PC costing considerably more.

It’s very much like my argument that Tesco’s Hudl2 tablet can be every bit as good a purchase as a higher-end Android tablet (or even an iPad). Entry level hardware has really come on leaps and bounds, offering a perfectly good user experience.

The battery performs well here too. The 7,900mAh battery is advertised as being good for 6-8 hours and that’s a pretty accurate figure in my experience, although you will need to turn down the brightness a bit more than you might like. With a 10-inch screen, that’s where a lot of the battery drain comes from.

Whether we can credit Intel for coming up with a really good low-end chipset (virtually identical as that powering the Hudl 2 incidentally), the speed benefits of SSD storage, or Microsoft for finally making an OS that’s more nimble and less memory hungry, I can’t say – but the end package is exceptional for the money. 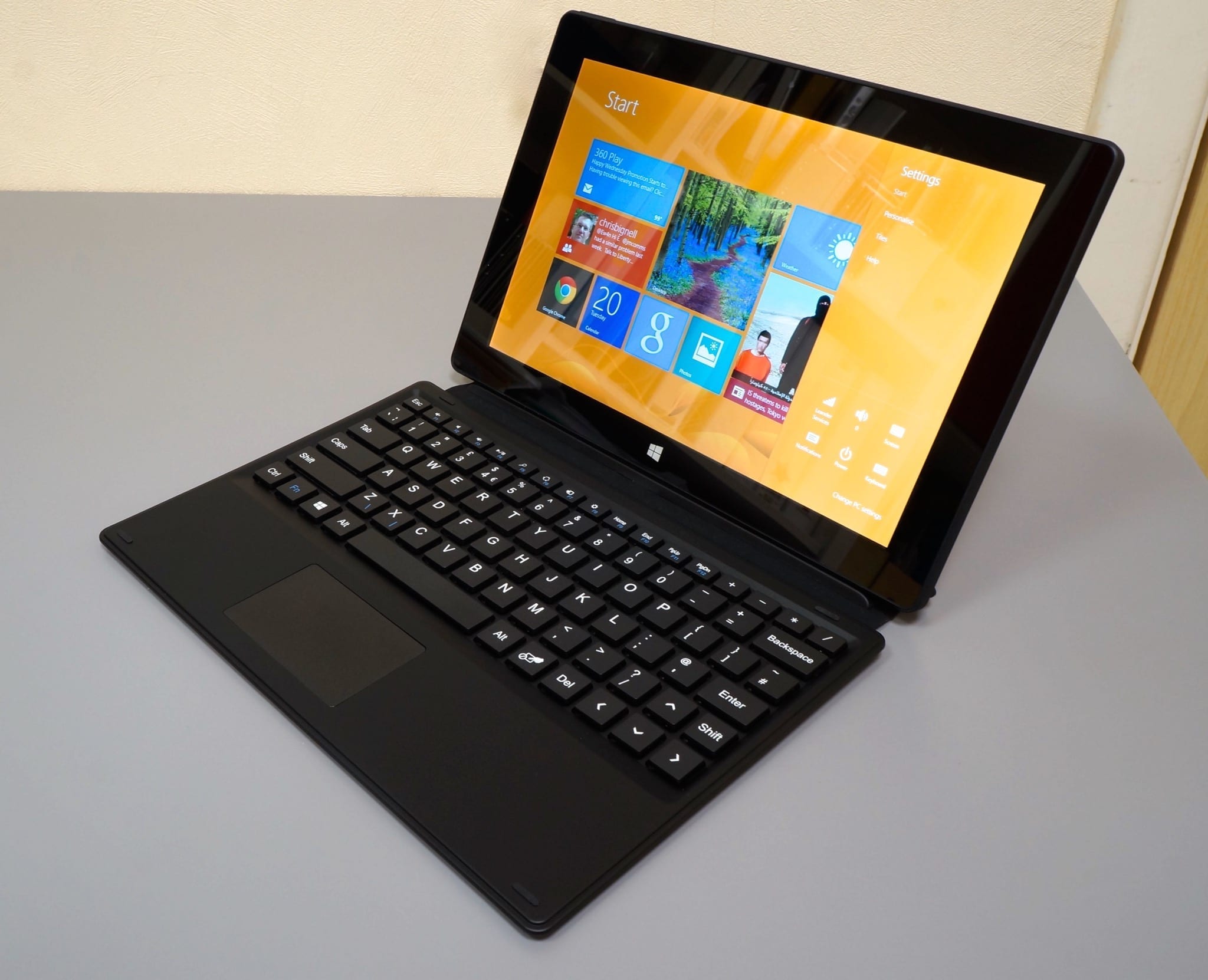 Letting down the team 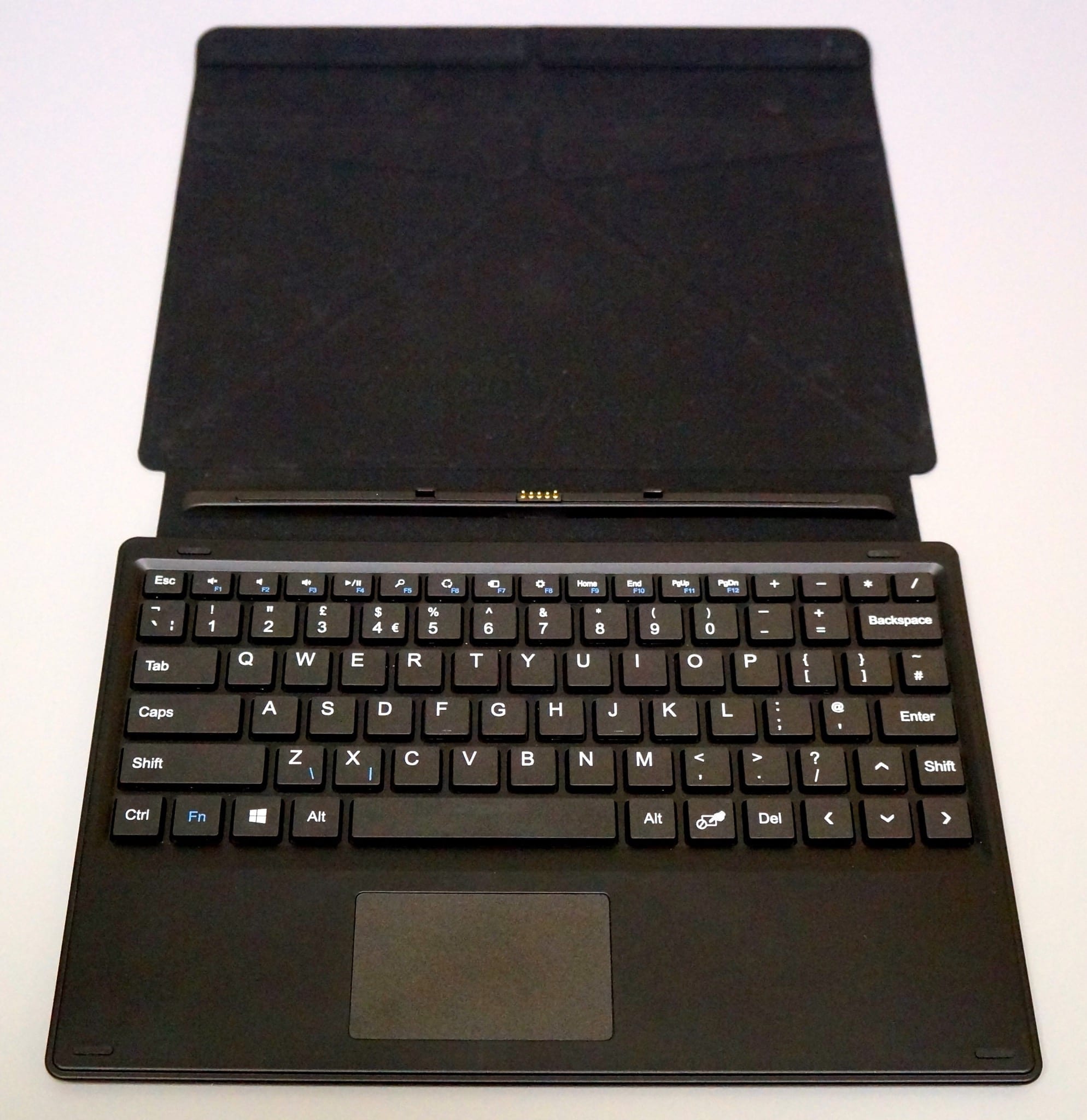 There is perhaps one big downside, which is that optional or bundled keyboard. While you are able to use any keyboard or mouse that you want, either via USB (a USB adapter is included in the box, which can be used in conjunction with a hub) or Bluetooth, the keyboard designed for the Linx 10 has the benefit of doubling up as a protective case, as well as standing the tablet up. It also connects easily via a magnetic dock, just like a Surface. 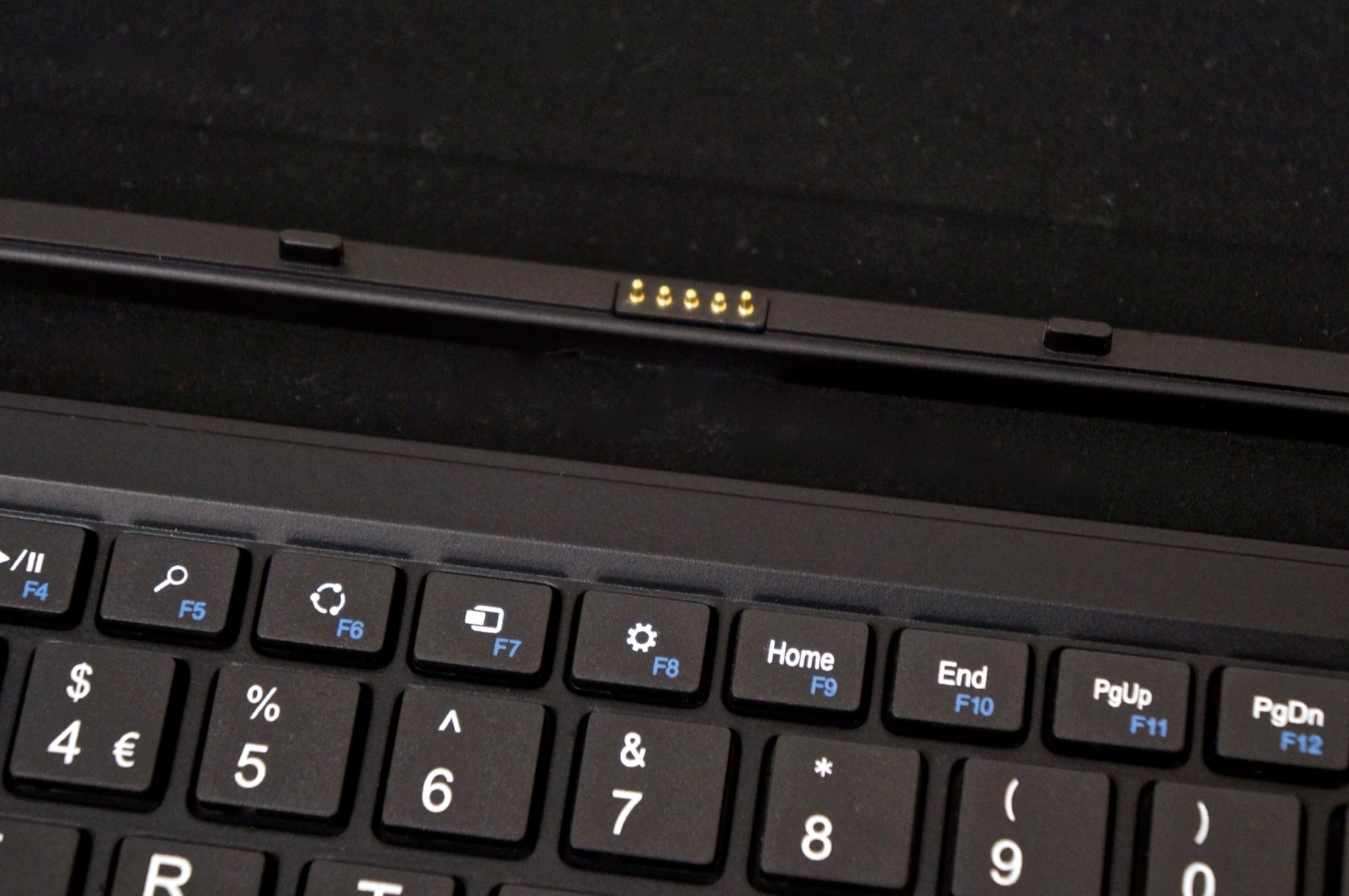 It sounds like a must-have, but it’s really not very good. It has pretty horrid keys to type on, plus an extended length caps lock button that means you’ll be literally shouting every time you try to press the A key.

I’d even intended to type this review on the keyboard, which seemed like a great idea until I got so infuriated I resorted to a traditional keyboard instead. Something like Logitech’s K480 Multi Device keyboard might be a good option, although I must stress that I’ve not seen or used one. If you have, please let me know what you think of it. 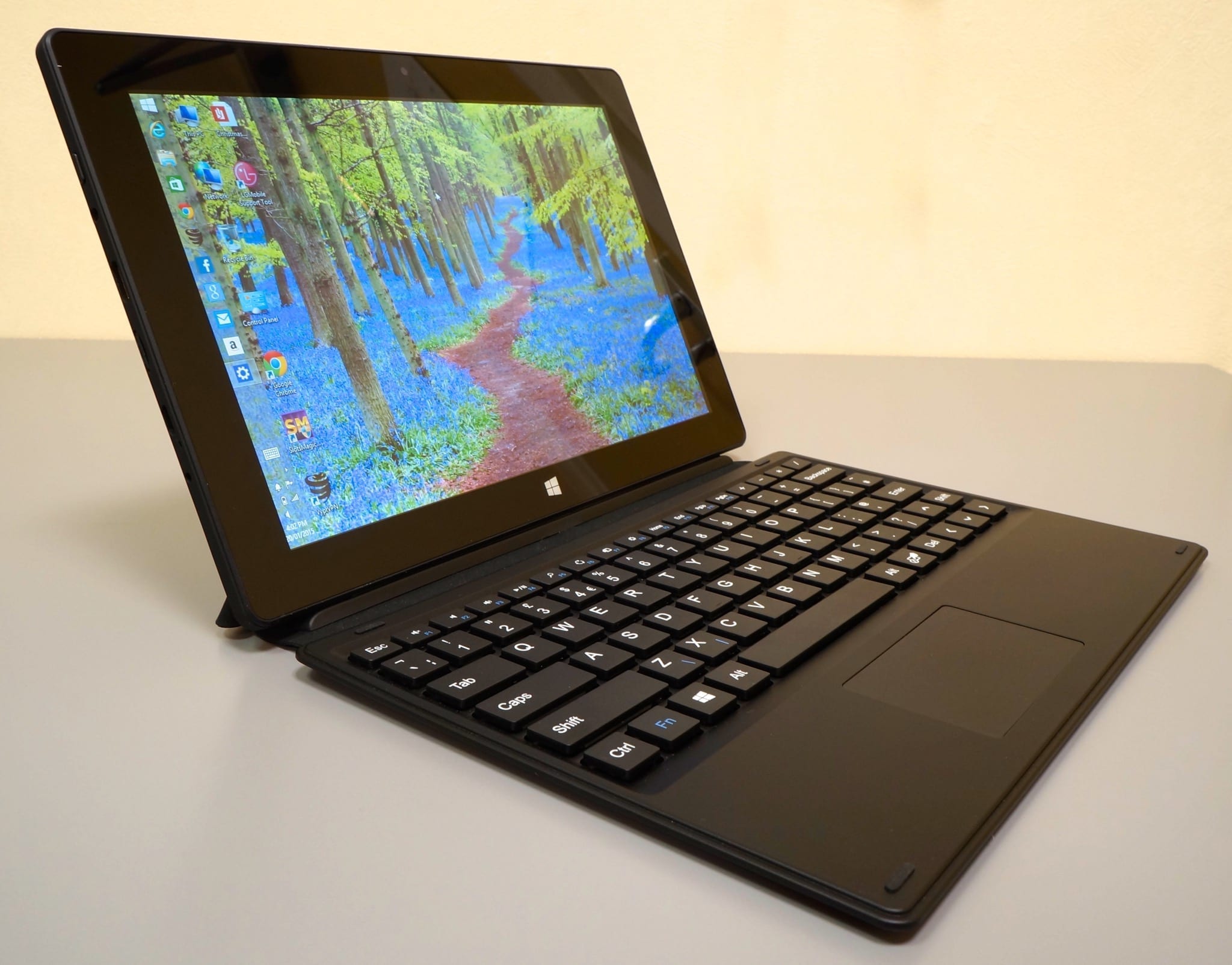 As good on the desk as on the move

While being a pretty effective tablet-cum-laptop (but with a different keyboard), I was also keen to see if I could perhaps use this as a desktop PC. Doing so was easy even if it won’t win any design awards due to the need to have cables hanging out the side.

The Linx 10 has a separate power input (you can’t charge via the micro USB port either, which is important to note when travelling as it means having to pack the original PSU), plus a mini HDMI output. 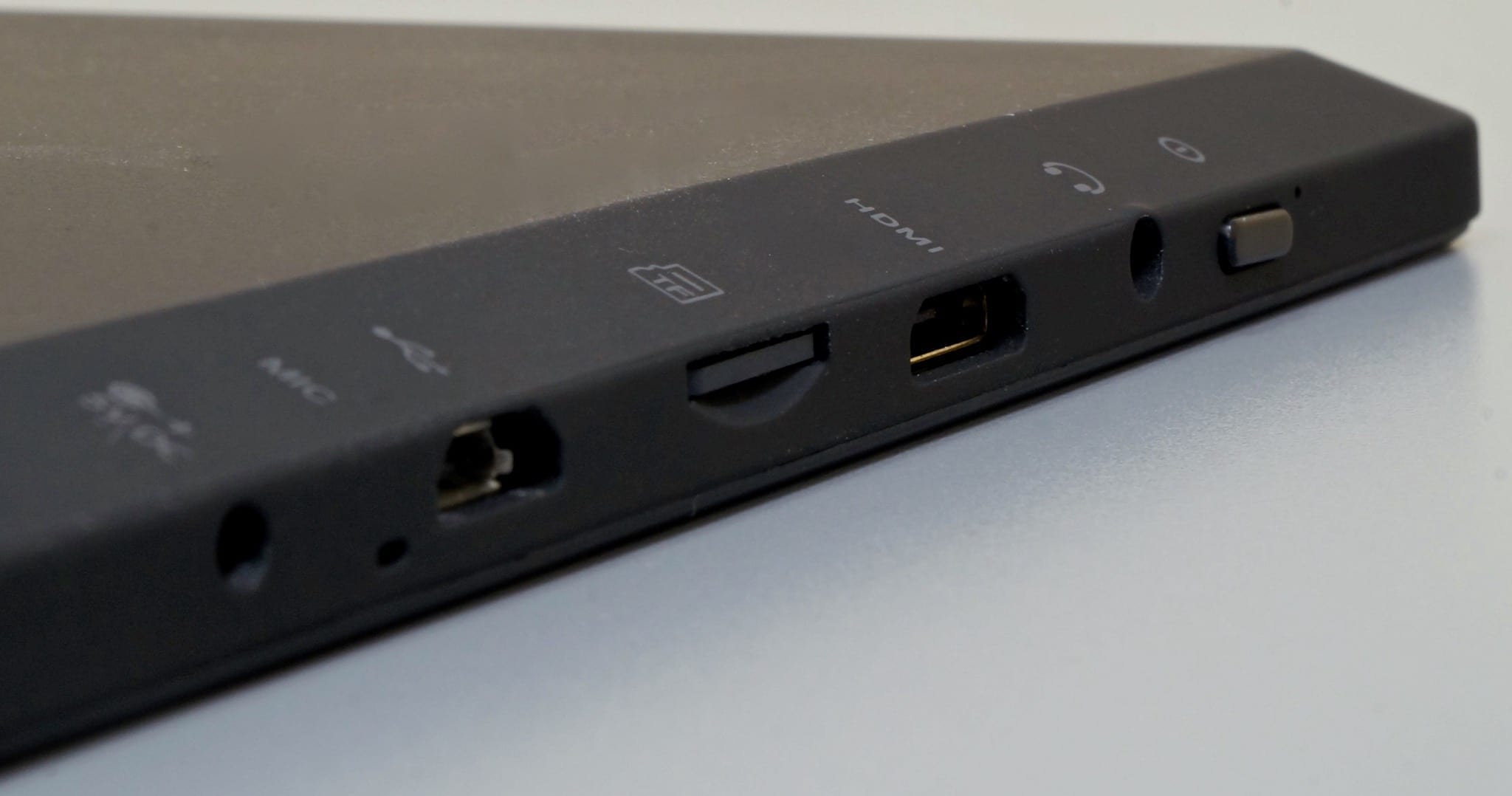 Having already got both a USB hub (to connect to the USB port via the supplied USB On-the-Go adapter) and HDMI lead, I connected it to a spare (full HD) monitor, paired up my keyboard and a separate mouse, and I was very impressed with the results.

You can either use both displays or just go for the monitor display and turn the tablet off. I opted for the latter here, tucking the tablet and all the messy cables behind the screen. A job well done, even if I do say so myself.

You can easily add an external drive for storage, but with a 32GB microSD card spare, I doubled the storage instantly. Well, technically speaking, I tripled it as almost half of the original storage space gets used up the OS.

You can of course get larger cards, topping out at 128GB, or perhaps buy one of the USB On-the-Go flash drives to take up far less room, especially useful when travelling.

With no USB3 support and no other docking solution, the setup on a desk might be a bit messy but it works. Not bad for something that can be used as a desktop PC today and taken on holiday tomorrow, while still running all Windows applications.

The Linx 10 is one of what I hope will be a new trend in low-cost, yet powerful, devices that will hopefully make people re-evaluate their options when choosing a device.

Power-hungry gamers and those requiring all the latest hardware support won’t be changing their purchasing habits anytime soon, but for a lot of other people there’s now a range of affordable alternatives. That can only be a good thing.

This tablet can’t do everything you’d get with the equally dynamic Surface Pro 3, and it doesn’t pretend to (even if I’ve made a few tenuous comparisons) but you can use this tablet to have fun and also be productive.

You can still play many games just fine, watch videos without stuttering, surf, email, work with Office documents and never begin to curse yourself for not paying more.

Even the keyboard, which isn’t great, has other benefits and might still suit anyone that isn’t planning to enter a lot of information anyway.

That’s what makes this tablet somewhat of a bargain, and a device I thoroughly recommend checking out before shelling out a whole lot more.

(Please note, these are not affiliate links and nor are they the only places that you can purchase a Linx 10 tablet, so do shop around)

Prices include one year of Office 365 (including 1TB of OneDrive storage) and a £50 cashback when trading in an old tablet that is currently scheduled to end 31st March 2015.

I have chosen not to give ratings in my reviews. Why? Because in my opinion it doesn’t take long for them to go totally out of kilter with other reviews written later on and become a total, irrelevant, mess – as well as becoming a constant trigger of arguments.

I prefer to have people read what I’ve written (or at least the verdict) and make up their own mind. A rating does little justice to a product if read in isolation, and sometimes things that I do or don’t like are not so important to the reader.