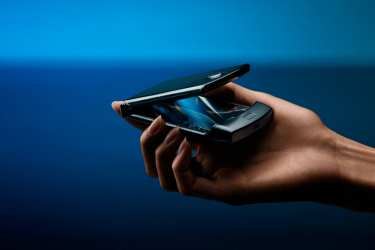 Motorola has brought back the iconic Razr, and this time it has a folding screen that replaces the laser-etched keypad of the original.

Exclusive to Verizon in the USA, priced at $1499, and EE in the UK (price not yet announced), it isn’t going to be cheap phone.

However, it does have plenty of innovation to justify a premium, unlike many other phones on sale where it seems to be little more than greed on the part of manufacturers.

The 2019 Razr is powered by a Qualcomm Snapdragon 710 SoC, packing in 6GB of RAM and 128GB of storage. The phone is 4G only, but there’s a good chance a 5G model will be released in 2020, just as soon as Qualcomm releases its next generation of chip with integrated 5G modem.

On the imaging side, there’s a 16-megapixel camera with f/1.7 aperture and ‘night vision’ software.

Screen wise, the Razr continues to have dual screens, but the outer screen has grown to 2.7-inches (800×600 pixels), while the folding internal screen measures 6.2-inches from corner to corner (2142×876 pixels).

The outer screen is now touch-sensitive, so you can use it to interact with the phone for common tasks without the need to open the phone up at all.

The Razr V3 had a screen resolution inside of 176×220 pixels, while the outer screen was just 96×80 pixels and good for little more than showing you who was calling.

Motorola has even managed to pack in a fingerprint sensor this time around, although there’s no SIM card tray – the phone uses an eSIM instead.

That’s not a problem for EE, which has the exclusive in the UK, who has been supporting eSIM for some time.

“As the UK’s number one network, we always look to provide customers with the latest technology and experiences – whether that’s the fastest speeds, or ground-breaking smartphones. By partnering with Motorola on the new razr, our customers will get exclusive access to what already promises to be an iconic new smartphone. Only on EE will customers get the most out of the new razr with the UK’s best network, best in class unlimited plans and great swappable benefits.”

Opinion: Not the first premium Motorola and certainly not the last

Motorola has a history of charging high prices for innovative phones that gave them a jump on the competition.

It’s a tradition that goes back to the 1990s, when Motorola released a limited-edition MicroTAC VIP with a hugely inflated price, seemingly to appeal to wannabe gangsters of the day.

Then in 1995, it launched the analogue StarTAC with an eye-watering pricetag of around £3000. It came in a limited edition presentation case and bag, but digital phone networks were already quite well established by then, so it took an extremely dedicated fanboy to buy a phone based on old technology.

But people did buy it – because it looked amazing.

A slightly larger digital version arrived in early 1996, and went on to be a huge success. The high price of the analogue model having helped bring production costs down.

Later on, Motorola introduced the tiny v.3688, and while pricing was still premium, it was far more steady and a far cry from the £3k asking price for the StarTAC.

There was also the Motorola Aura, with a high-definition circular display that topped 300 pixels-per-inch. Prices once again jumped for this limited-edition model.

Unlike the new Razr, running on Android, the previous premium offerings from Motorola always suffered from a poor, almost painful, user interface with the software always playing second fiddle.

Thankfully that is one part of Motorola’s history that isn’t set to be repeated today.

All of this history goes to show that, at under $1500, the new Motorola Razr isn’t as overpriced as some critics have stated. Indeed, my initial reaction was that it is cheaper than I expected.

The new Razr isn’t designed to be mass market, any more than Samsung expects everyone to use a Galaxy Fold by Christmas, or Huawei can predict everyone buying the Mate X over a P30 Pro, but it is still likely to sell in good numbers to early adopters.

The mobile industry has been crying out for something fresh, new and exciting, and as time goes on the cost of production will continue to fall until phones with foldable screens do become more mainstream.

Arguably, compare this with the price of an iPhone 11 Pro Max with 256 or 512GB of storage and you could even state that the new Razr is a bit of a bargain!