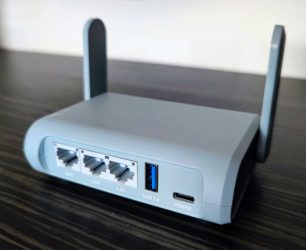 A portable router offers lots of flexibility for those who want a safe, reliable, connection when venturing beyond the home or office. But is this for you?

Whether you travel a lot or only on occasion, Wi-Fi on the move can more often than not be a painful and dispiriting experience – with issues about security just one thing to consider.

There are also factors like signal strength and wireless congestion, given there are many ancient 2.4GHz Wi-Fi hotspots out there fighting ‘to be heard’ and offering up a pretty awful experience.

(As an aside and without wishing to be too political, the suggestion of using Wi-Fi instead of your own phone when roaming in the EU, to save on the reintroduction of charges, is not a particularly good solution.)

These days, the chances are you’re carrying a device in your pocket that can offer a better, more secure, connection to the outside world, and you probably now have a reasonable amount of data you can use too (or indeed, unlimited data), but that doesn’t come without its own issues also.

This is where Beryl (aka the GL-MT1300) comes to the rescue, offering a wide selection of connectivity options that can work with your mobile device, as well as offering better protection and more flexibility when using public hotspots.

For example, in a hotel you can share a single login with multiple devices by using this pocketable router, or if you remember to pack an Ethernet cable you may be able to use the fixed Internet connection in your room to set up your own local hotspot – avoiding the poor wireless signal in the room because your nearest access point is half way down the hall. You can then secure these connections with your own tried-and-tested VPN as required.

Your phone can only do so much

While it is massively convenient to activate the portable hotspot feature on your smartphone, there are a few things to take into account:

Portable routers that can operate in multiple ways have been around for some time, and many are extremely cheap, but until now they have almost always offered poor wireless connectivity, an older micro-USB charging port, slow USB (limiting the data speed when tethered to a mobile) and a slow to navigate web-based user interface.

GL.iNet’s rather oddly named ‘Beryl’ router is more advanced than anything on the market, yet sells for around £65, or less.

The Wi-Fi speed tops out at 866MHz on 5GHz, allowing faster speeds to be shared, although if you can use Ethernet then this does away with Wi-Fi congestion issues entirely. The faster Wi-Fi speed also helps with any communication you wish to do between connected devices.

The router can be powered from any USB-C power source and if you choose to use USB tethering, the phone will charge at the same time as sharing data.

It’s a very quick and easy setup process, and if you want to add a VPN then that too is a simple and painless procedure thanks to the OpenVPN config settings that you can download from your VPN provider.

Once you’ve set up the VPN, you can either use the web based UI to turn it on and off, or use the dedicated switch on the side to toggle it even quicker. Sites you wish to have bypass the VPN can be whitelisted, and you can also block all traffic that isn’t passed through the VPN.

When you aren’t needing to tether your mobile data connection, Beryl works equally well at being a Wi-Fi repeater. You can also take a connection via Ethernet and then share it over Wi-Fi to other devices (as well as two other wired connections).

Again, these aren’t new or exclusive features, but this is a more advanced product that gives a better overall user experience than cheaper models.

I was able to enjoy speeds of 200-250Mbps from a smartphone connected via the USB, although it should be noted that you can expect a hit on data speeds when using a VPN.

The router is powered by an 880MHz MediaTek dual-core chipset that keeps the Linux-based OpenWrt web-based operating systems running smoothly at all times. Users of other routers with the same OS will instantly feel at home, while there’s a very shallow learning curve for everyone else.

You have full control of both Wi-Fi bands, and can also manage guest access. If you are allowing other people to connect, you can also set up a welcome screen that will appear once connected – and direct people to a specified URL.

As a ‘chuck in a bag and forget’ product, much like a phone/laptop charger, this is definitely something I can recommend for a variety of users.

For someone on business, it’s a no-brainer. At less than £70, and being capable of remaining useful for many years (USB-C, USB 3 and Wi-Fi 5 are all going to be around for some time to come), it’s a very worthy investment.

For others, who might just want more flexibility on a summer holiday or the odd weekend break, it’s still great for providing fast and secure connectivity to share with a family or multiple devices (other phones, tablets, laptops or consoles), being something that can be set up in a matter of seconds upon entering your hotel room, Airbnb or country cottage.

In the latter cases, the repeater mode could prove invaluable by extending the limited Wi-Fi range from the cheap ISP-provided router the owner has likely installed in the living room or hallway.

It’s quick to boot and sets everything up automatically for subsequent uses, so when you want to leave and take your phone with you, unplug your fully charged phone and go. Upon your return, plug it back in, reactivate USB tethering and you’re good to go.

The foldable antenna ‘ears’ are a nice way to protect the unit, and the plastic is sufficiently durable to stop it getting scuffed when you’re chucking it in a bag regularly.

You might read this review and still wonder why you really need one, given you can just use a phone as a hotspot, but there really is a big difference when using a dedicated hardware solution, not least the above mentioned benefits you get in the form of security and Ethernet connection options.

If you’re tempted, but still unsure as to whether buy this or one of the sub-£20 alternatives you can also find on eBay and Amazon, I would say that there’s no point in scrimping and ending up with something that will disappoint and end up not being used at all.

Beryl provides a multitude of features, and while Wi-Fi 6 is now starting to get more established, Wi-Fi 5 still has plenty of life in it, and this is definitely a worthy addition to your travel bag.

The Beryl VPN Travel Wireless Router is available to buy from Amazon. At the time of publication, the price was £64 including free next day delivery for Prime users.