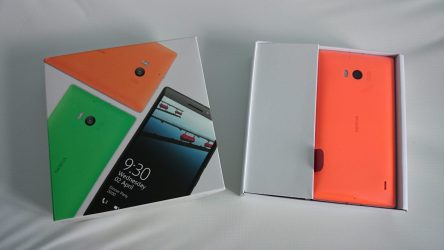 It’s a rather sad time at the moment. Firstly, knowing that the Nokia logo will soon disappear from Lumia handsets, and secondly, even worse for the many people recently told they’ll be losing their jobs.

But the new flagship Lumia 930, as well as the recently announced budget Lumia 530, the successor to the best selling Windows Phone phone of all time, means there’s never been a better time to dip your feet into the world of Windows Phone. Of course, each phone is at the exact opposite of the spectrum in terms of price and performance, and today I got a Lumia 930 – in bright orange (they aren’t lying) – to try out, courtesy of the Microsoft Connects team.

Hopefully in the future, I’ll be able to try out the Lumia 530 too, and see if it’s a worthy competitor to the recent crop of budget Android phones, like the awesome Moto E and Moto G.

I’ve been running Windows Phone 8.1 on a Lumia 1020 ever since the beta was offered to those willing to throw caution to the wind and run the pre-release, potentially bug-ridden, version of the OS. It has so many improvements that I could never go back.

And the good news is that the Lumia 930 has 8.1 out of the box, while 8.1 is currently rolling out to other Lumia devices as an over-the-air update.

The key improvements in 8.1 are things like notifications, being able to easily toggle features like Wi-Fi or flight mode, constant signal and battery meters on display, plus more icons on the start screen – including new backgrounds.

This might not sound like much, but it makes a massive difference. There are many other improvements too (like a lot of hype about Cortana – Microsoft’s take on Siri and Google Now) , but these are the most obvious, and the ones you’ll appreciate on a daily basis. I’ve reviewed many Windows Phone handsets over the years, ever since being fortune enough to attend the original WP7 launch and hearing Stephen Fry talk up how great it would be. But despite having so much potential, and a very fast and simple UI that takes a very short time to learn, I’ve never felt comfortable enough to switch from Android to Windows Phone on a permanent basis.

The 1020 is however used regularly to keep abreast of all new OS developments, looking at new apps, and – of course – for that camera.

The Lumia 1020 camera is awesome. The 20MP camera in the 1520 was also great, but I was never particularly impressed with the  wannabe phablet. Ultimately, Microsoft never did anything to make the OS more usable on the bigger screen, making it particularly difficult and frustrating to use with one hand.

But the spec of the 1520 was great and a big step up from the 1020. Given the Lumia 930 puts everything inside a far more conservative case (in a range of perhaps less conservative colours), it appears on paper to be the best Windows Phone offering of all, even with the scaled back camera and no Xenon flash.

The Lumia 930 still has all the clever PureView features, including a lossless zoom and ability to re-focus after taking a picture, backed up by a large (but manageable) 1080p display and quad-core CPU.

The Z2 is probably the closest competitor, given the equally matched image sensor, so it’s rather apt that the Z2 is the phone I own and use on a daily basis. I am really looking forward to comparing them side by side, and hope you’re rather interested too. So, as I begin to play with the Lumia 930 (having specifically purchased a prepay SIM from EE for £15 with 10GB of data for 90 days – a pretty good deal, especially as the £15 remains as credit for use afterwards) I will not only be deciding whether this is the best Lumia smartphone ever made, but hopefully being able to reconsider if the Lumia 930 might finally give me the confidence to switch over to Windows Phone as my ‘main’ phone.

Check back in the coming days, or subscribe to my feed, to see what I think, and please also feel free to share your own thoughts and views – especially if you’re also like me and wondering if you could ever see yourself switching from another OS to Windows Phone.

One thought on “Lumia 930 first impressions: The one to finally make you switch?”