How annoying is it to be held in a queue for customer service to keep being told how valuable your call is? Well, it seems your call might now be a lot more valuable than you ever imagined.

And if you think my headline is a little too Buzzfeed, think again. EE has recently announced a new priority answer service to let you reach customer services quicker, jumping over the heads of those who may have been waiting longer than you.

50p is the price, and with our busy and hectic lives it could be seen by some as a worthwhile investment to prevent wasting a whole lunch break to deal with an issue.

Of course, if everyone decides to pay for the premium access, you’ll be back where you started. Except EE will have made a few quid in the process.

This priority service is about as suspect as the many mobile game developers that work so hard on figuring out new and cunning ways to part us with our hard-earned on in-app purchases.

Most games will let you play normally for free, but progress at a glacial pace. So, the developers are all nice and friendly by allowing you to skip ahead that bit quicker by simply paying a few quid.

People seem to have no problem paying huge amounts to queue jump at theme parks, and also accept paying a bit more to board a plane earlier on a low-cost airline, so why not charge for calling customer service?

In fact, why has it taken so long for this to happen?

EE even makes its offering sound like something we should really be grateful for:

“Our priority answer service gives you the choice to get support even faster for just 50p per call when you call 150 and want to speak to customer services. It’s always available so if there’s a queue, you can be moved towards the front – ideal if you’re in a hurry” (Source: EE).

The worrying thing isn’t that EE has the nerve to introduce such a charge. No matter how outrageous I might think it is, and others do too (there are already many EE subscribers on forums talking about switching network in protest), it is nevertheless a personal choice whether to pay or not. 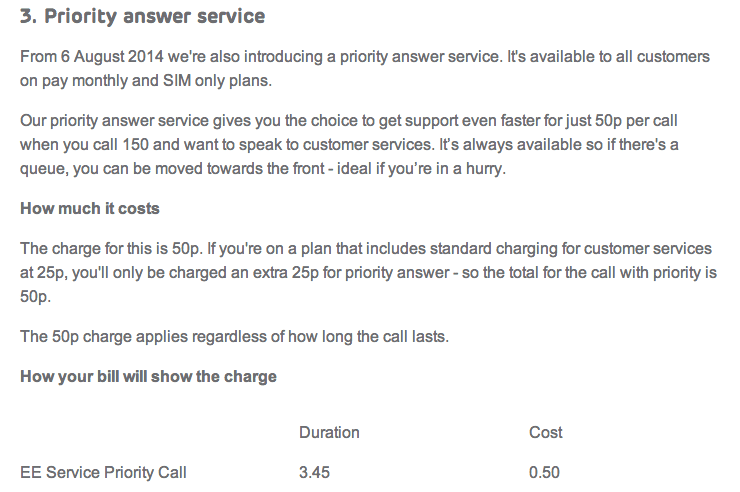 EE isn’t cutting access to its staff if you don’t pay, you’ll just wait longer. As it’s an optional charge, EE will argue that it’s not doing anything wrong at all.

The problem is a lot bigger than what EE is doing. The bigger picture is that this is going to become a ‘thing’.

Other companies will almost certainly follow, if they haven’t already.

Guidelines state that any company you have a contract with cannot charge a premium for calling customer services, so clearly companies are reeling from the effects of a drop in revenue by having to ditch those expensive 0870-type numbers.

Rest assured, they’ll all be looking for ways to get around the new rules, and it seems EE is way ahead of the game.

There will also be a new 25p charge to call customer services during the day for customers who signed up after August 6th 2014, plus a 50p charge to access customer service between 8pm and 10pm Monday to Friday, or 6pm and 8pm at weekends.

EE is far ahead on its 4G roll-out, and offers some fantastic speeds to its users – with more on the way (such as its 300Mbps service coming later this year, or early 2015). It also came out top on the recent Ofcom survey to test successful call connection rates.

It therefore seems like total madness to do something that could steer potential customers elsewhere, but perhaps EE has done the maths and worked out that it will made a shed load of money from it – and that many customers won’t actually move.

Indeed, if every other operator follows suit, as is likely, where will anyone move to?

The future is.. expensive

EE can charge more for those who call directly from their EE phone, but when it comes to other companies it might not be so easy. British Gas, for example, won’t have access to your phone bill to levy a charge – and it can no longer use a premium number.

However, it isn’t impossible to imagine that once you’ve confirmed your account details at the start of the call you might be presented with the option to ‘press 1 to jump the queue’ and, once through, have the charge added to your account.

In fact, I can see that as being exactly how it will be done.

And why stop with priority access, when you could have further in-call purchases to determine who you get to speak to?

Oh, and the ultimate one: £100 to speak directly to the CEO.

Please let me know your thoughts on this below. Bear in mind that any comments have to be manually authorised to prevent spam, but if you chuck a tenner on my PayPal account, I promise to do it a little bit quicker.

UPDATE AUGUST 15TH: The Daily Mail has now written about this too.