No you haven’t stumbled upon an old article. It’s very much September 2014, even if Motorola has opted to announce two new handsets today with the same name as those released a year ago, namely Moto G and Moto X – the second generation.

Motorola also gave more information about its forthcoming Moto 360 smartwatch, and teased us with a a new Bluetooth headset that’s almost invisible.

Finally, the Moto Maker customisation service is now available in the UK giving total control over how your new Moto X could look.

I went along to a pre-briefing to find out more.

First some background (feel free to skip if you already know the score).

About this time last year, I went mad over the release of the Moto G, a highly affordable yet powerful smartphone that became the best selling Motorola phone of all time. And deservedly so.

Now Motorola has taken its budget offering to another level. If a 4.5-inch display wasn’t big enough, the new Moto G leaps up to 5-inches. Mighty impressive for a phone that retails SIM-free for under £150.

The original Moto G was a fantastic offering, let down only by the lack of 4G and a sub-par camera. Given not everyone is fussed about imaging quality, and 4G wasn’t widely available, it still proved an absolute steal.

But earlier this year, Motorola added 4G and a memory card slot, along with an even cheaper Moto E, also with expandable memory.

Unfortunately with little over 2GB of free internal space on the Moto E (the only place you can install apps on Android 4.4), it proved to be a real problem even for users that don’t have a desire to download loads of apps or games. Install just one or two large apps, or let the cache files mount up, and very quickly the Moto E will come to a crashing halt.

Fortunately the Moto G fares a bit better with 8 or 16GB models, and the 5-inch display might still be 720p, but that works out at a still impressive 294PPI.

The camera sees an equally impressive improvement, jumping to 8-megapixels and gaining an LED flash at the same time.

But there is one catch. The new Moto G is back to being 3G only, although this time our review model comes with two SIM slots. One 3G (with HSPA+ support for data speeds of up to 21Mbps) and the other 2G only, but still with data support.

With a guaranteed update to Android ‘L’ later in the year, the same impressive Qualcomm Snapdragon 400 processor, running four cores at 1.2GHz each and with a 450MHz Adreno 305 GPU, the lack of 4G might still be something people can overlook for what is otherwise still an absolute bargain.

Like the models before it, the new Moto G still performs pretty well in a benchmark test, this time using AnTuTu v5. You might of course expect this, given the screen still has the same amount of pixels to process.

The new phone continues to be sold with a range of coloured rear covers to complement the basic black or white phone, and there’s also an optional magnetic flip cover to turn the display on and off automatically – just like the original.

Perhaps the biggest news is that it’s on sale from today, via Amazon. With prices starting at £144.99 for the 8GB model that’s an awful lot of bang for your buck.

My first impressions are that the new phone is even more impressive than the first. It all starts with the screen, which is clear, bright, and extremely colourful. Not the sort of display you expect on a budget phone by a long shot.

The camera also seems to be a significant improvement, although some would argue that this wouldn’t be particularly difficult. This time around, it seems, you can zoom in photos on a desktop and see the finer details instead of a blurry smudge.

So, the only thing lacking is 4G, and also 5GHz Wi-Fi it must be said, but if the success of the original is anything to go by, not everyone is desperate for 4G even one year on.

I am not so sure that this could be said this time next year, but I’m sure a 4G version is already on Motorola’s road map for 2015. Meanwhile, the second generation Moto G could well enjoy the same level of success as the first, or perhaps even more.

Best of all, I now have a review device so will be able to give some more thoughts, including camera samples, in the coming days.

Everyone has been waiting for the new Moto X and hoping that we wouldn’t get it six months late, and today it has arrived. Well, almost – but certainly not so long after its US release that everyone else has long moved on.

Every aspect of the new Moto X has been given a lift, and it now comes with the Moto Maker customisation service previously only available to US customers, giving a lot more choice for those who can go without just buying a standard black or white model off the shelf.

Moto Maker allows you to customise just about every aspect of your phone, from storage space, wallpapers, boot-up text and an automatic login to your Google account that means setting it up will take a fraction of the time taken to set up rival phones, but it’s about a lot more than just software customisation.

Loads of individual aspects of the phone design can be customised too, from the rear colour to various textures including wood, bamboo, and real leather.

You can select different colour insets for the microphone and earpiece, as well as the camera lens surround. Engrave the phone with a line of text (profanity filters will stop you getting too carried away, Motorola was keen to point out) and you can truly call the phone your own.

Well, it will have to be given how you might succeed in making it impossible to sell on. 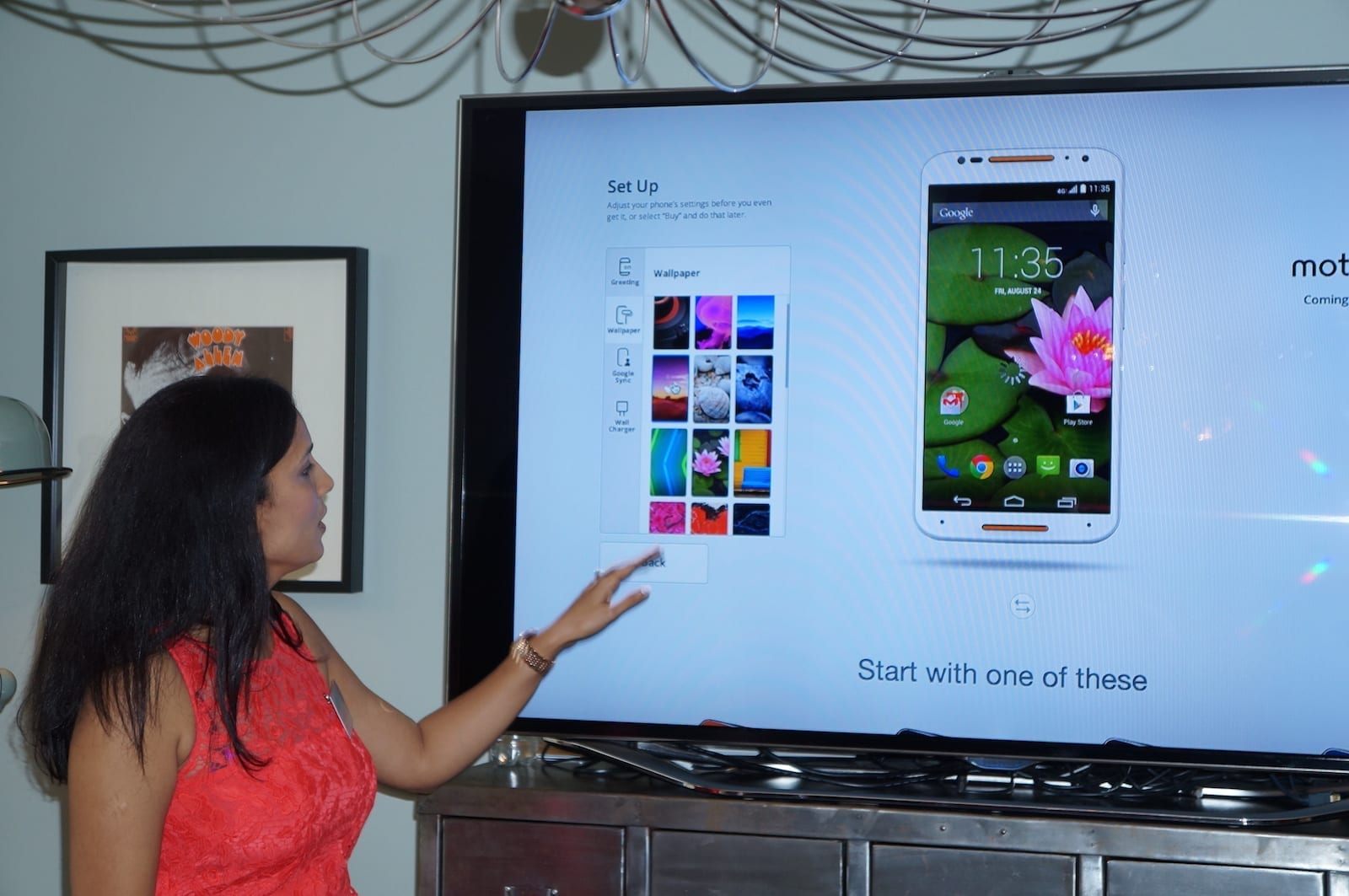 The enhanced features look set to make this a flagship that can take on its rivals without ending up like an also-ran.

The new Moto X goes on sale at the end of September and hopefully I’ll be kitted out with a review unit in time to give my opinion, as it wasn’t really possible to try out all of the features in the demo room. 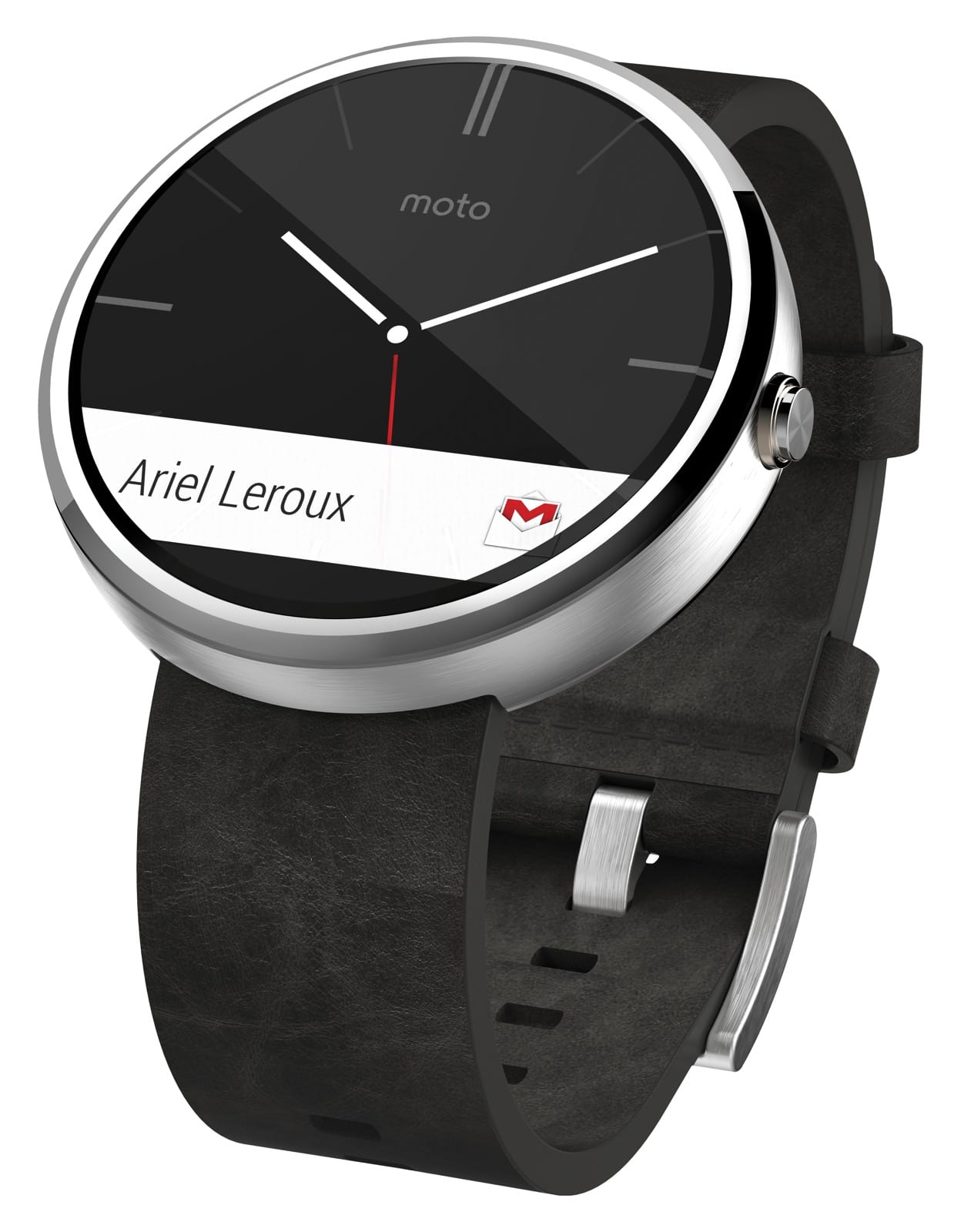 Motorola has already shown off its Moto 360 with round display, but in the time from announcing it to actually going on sale, a lot of other things are happening in the smartwatch space.

They seem to be springing up from everywhere at the moment.

The good news is that Motorola has now confirmed the Moto 360 will be on sale in early October, at a retail price of £199 and available from O2, Tesco, Amazon, and John Lewis.

It almost feels like closure, although that’s still a few more weeks to wait for the watch that feels like it’s taken all year. Well, maybe not quite that long, but Motorola did drop some very not-so-subtle hints at Mobile World Congress back in February!

The watch comes in black or white, and is extremely sexy, as long as you can live with the blanked out section at the bottom of the display and a rather chunky face.

A wireless charger is bundled with the Moto 360, and the watch also comes with a built-in pedometer and optical heart rate monitor.

I’m still in two minds about all of the Android Wear devices, given their poor battery life (the Moto 360 is down as having ‘all day battery life’, which isn’t exactly great for when you travel) but the watch does look awesome.

It’s not super thin, but neither is it too chunky, but while the display is more impressive than my Pebble, I think I’m still going to hold on for a bit. With five days of usage being easily attained in my Pebble, I think there’s still some work to be done on all of the latest offerings – Moto 360 included.

But I’ll reserve final judgement until I’ve had a chance to use it properly. Meanwhile, you can salivate over the photos below. Did I mention it looks really, really nice?

It took a long time, but eventually people wearing headsets and talking as they walked down the street stopped looking like idiots.

Okay, so the jury might be out on that statement, but the point is that you’ll probably now assume that someone is on the phone and not talking to themselves.

If there ever was doubt, you could usually check quite easily to see, but not so with the latest creation from Motorola.

Moto Hint is rather hard to notice, looking more like a hearing aid than a headset that can operate from voice commands without even having to touch it.

That’s as long as you have a compatible Motorola phone, but even if you don’t, it’s not too hard to simply tap the capacitive button on the section that isn’t shoved down your ear canal.

Like earlier Bluetooth headsets, the Moto Hint comes with its own holder that also charges the headset when not in use.

Without a price or release date (other than it being this side of Christmas), I have no idea how successful this device might be, but if you don’t like wearing headsets but need to keep up hands-free communication when driving or simply out walking or jogging, the Moto Hint might be the perfect choice.

Just don’t be surprised if you start to get those funny looks all over again.