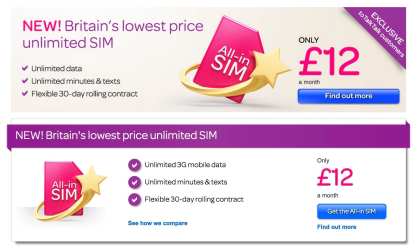 It’s odd how some networks see value in SIM-only deals, while others appear to only offer them because Ofcom requires them to exist.

TalkTalk has today launched a contract ‘All-in’ SIM only tariff with unlimited calls, texts and (3G only) data for just £12 a month – exclusively to TalkTalk broadband customers. Meanwhile, EE is seemingly happy to offer users just 5GB of data per month for £27.99.

Non-TalkTalk broadband customers must pay £24 a month and get just 2,000 minutes of calls, plus 2GB of data (texts remain unlimited). In other words, it’s all about quad-play (getting customers to sign up to home phone, broadband, TV and mobile).

Data above provided by TalkTalk

TalkTalk is certainly going to be attracting a lot of interest in this deal – but, just like so many other deals that seem amazing on paper, what are the catches?

Suffice to say, my Spidey Senses were immediately set off when I saw the ‘unlimited data’ bit. Very few operators offer truly unlimited data these days, with perhaps the most notable exception being Three. Could TalkTalk really be that  generous? Even Three is cutting down on tethering and there are ongoing rumours that unlimited data could be axed on prepay later this year, and potentially from contracts after that.

TalkTalk has at least prepared for the many people like me who will be equally sceptical, by producing a full explanation within its Good Network Guidelines.

And it’s here that it shows why it sometimes pays to be suspicious.

If we believe that some people are compromising the data flow of all our other customers we will be asking them to reduce their usage and we may not renew the monthly unlimited calls or data boosts on their package so that we can protect the rest of the network and maintain a good network experience for others.

It’s quite accepted that tethering is not something any network really wants to offer these days. When purchasing a fixed amount of data, most networks will still allow you to use it however you want, but BT Mobile took a different view when it launched.

Who knows if others may follow, but it’s clear that tethering allows users to consume data quicker and more easily – so restricting it can keep usage down. BT must be banking on the fact that most of its subscribers won’t regularly consume the very generous 20GB allowance on its top tariff every month, or even any month.

But tethering aside (to make it clear, tethering isn’t allowed with the TalkTalk SIM), what about when you’re sold something that says unlimited, but comes with a ‘get out clause’ like the above?

Is okay to remove the facility for those who actually take advantage of it? TalkTalk seems to be taking very much the same approach as Giffgaff, which also took away unlimited data from some users – and even terminated contracts completely.

TalkTalk might be referring to extremely excessive usage, but nowhere does it actually set out a limit. Nor should there be a clearly defined limit if you’re going to use the word ‘unlimited’.

It’s all a bit confusing, but sadly not that surprising.

Nevertheless, it’s still a cracking deal if you can stay within TalkTalk’s guidelines. Given you’ll only be tied in for 30 days, there’s also no chance of being contractually bound to continue on a tariff that has had the best bits taken away from you.