There was a time when just about any phone could cope with the odd bump and scrape, perhaps with no more harm done than a few surface scratches, but today even sneezing in the same room as many modern phones is enough to crack the display.

Not so with the strong and rugged Cat 60 phone. Hopefully.

Amongst all the latest generation of waif-like, glass fronted (and backed), slabs of highly bendable metal, it is increasingly difficult for some people to find something that can cope with their line of work.

That isn’t to say there aren’t other ‘tough’ phones out there (Bullitt Group, which makes the Cat 60, also produces other, cheaper, models itself), but many aren’t widely available in the UK – the Samsung Galaxy Active phones spring to mind – or are seriously lacking in specs. Some aren’t even smartphones, meaning they’ll be good only for making and receiving calls and texts.

Another option is a protective case that most of the more popular phones will have on offer, but often that impacts on usability. Plus, few will offer waterproofing – or not without even more of an impact on usability.

So enter the Cat 60, an IP68 rated phone that’s good for just about anything you can throw at it (or perhaps the other way around). The screen is protected by Corning Gorilla Glass 4 and the whole surround is metal, so pretty rock solid.

Running Android Marshmallow, the Cat 60 has a 4.7-inch display 720p, powerful speakers, a 13-megapixel camera (and 5-megapixel selfie cam), plus a waterproof rating down to 5 metres.

There are switches to protect the speaker and mic, but this isn’t so much to avoid damage, but rather protect against the inevitable muffling of sound that comes with water afterwards. There’s also a clever feature that vibrates the phone to shake away water quicker than just waiting for things to dry out naturally.

It’s getting hot in here…

The other unique feature is the FLIR thermal camera, which may seem like a gimmick to many but could have many genuine uses for many people, from fire-fighters to engineers looking for hot spots in a building, or machinery.

My work doesn’t really involve needing to check temperatures, so my testing of this was rather more for the novelty factor, but I did like the feature and the ability to pin-point any area on-screen to see the precise temperature.

Checking items in a fridge allowed me to at check the accuracy to a degree (sic), and the thermal camera definitely left me impressed.

It’s no longer acceptable to have a business phone that has a sub-standard camera, as a decent camera allows for quality photos to be taken on site, documents scanned and more.

The 13-megapixel camera on the Cat 60 is quick to focus and takes detailed photos, and besides the thermal imaging function and a front-facing 5-megapixel camera, it also records video at full 1080p resolution and 30 frames per second.

It’s possible to take a thermal image and normal issue simultaneously, and either save each separately or combine the photos into one shot by adjusting the opacity. 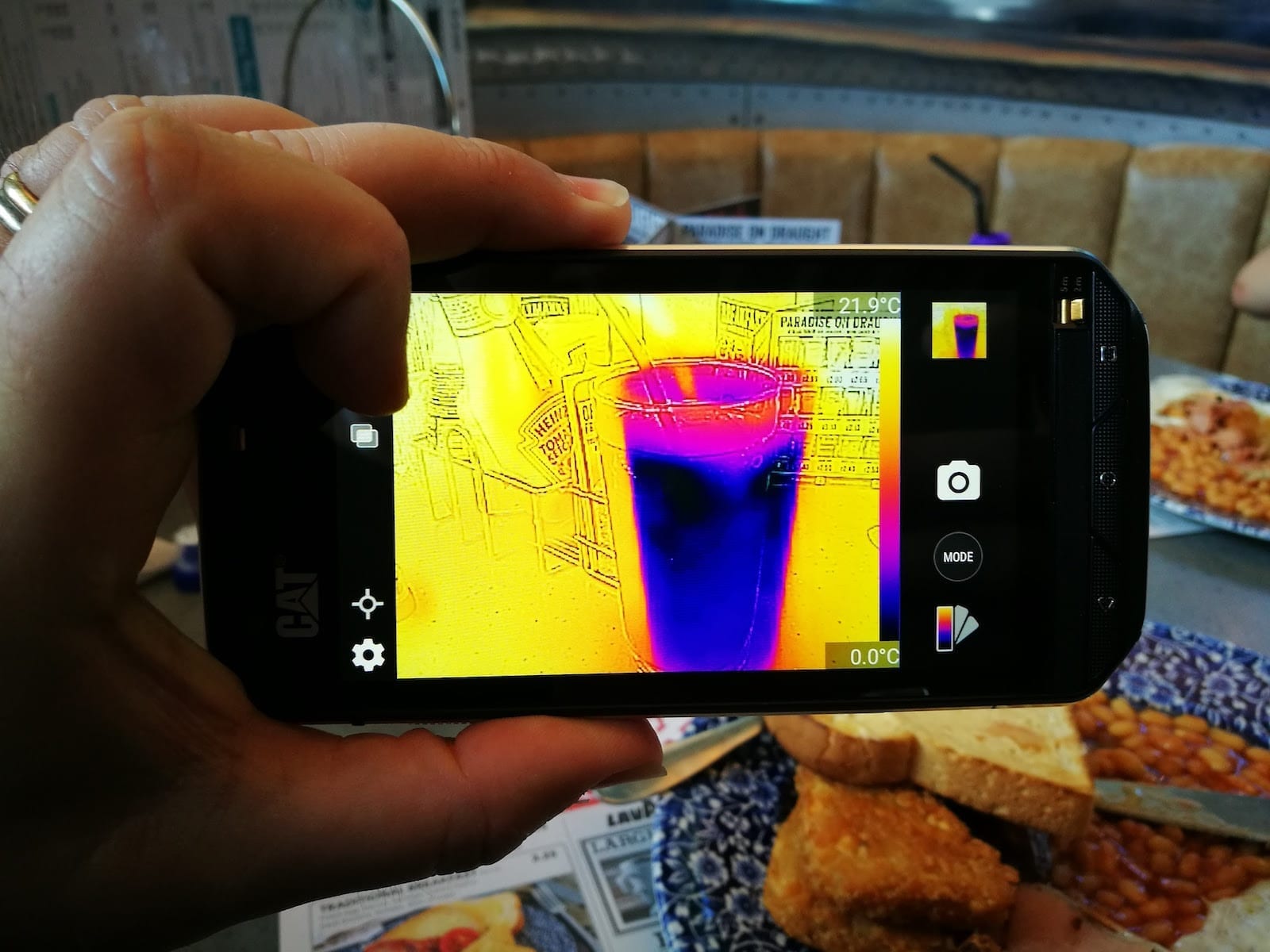 The Cat 60 is a dual-SIM (4G) phone with 32GB of internal storage and a memory card slot. Unlike some phones, it has two SIM card trays (nano SIM) that are independent of the memory expansion slot, so you don’t have to choose between a second account or more storage.

The 4.7-inch screen is only 720×1280 pixels, but that’s still 312 pixels-per-inch, so you won’t struggle to read text, or pick out the finer details on photographs.

Under the hood, the phone is powered by Qualcomm’s Snapdragon 617 SoC. This is perhaps the only thing that raised some concern, as it is a chipset that has been notorious for heating issues and other performance-related foibles in the last year or so.

Although there were some modifications on the 617 vs the original 615, many other phones have still had problems with this too.

Thankfully, the Cat 60 never exhibited any such issues. Perhaps this is down to the design of the phone, which makes it easier to get rid of heat (and prevent CPU throttling) or it’s the lower resolution display that puts less pressure on the CPU and GPU. Whatever the case, the Cat 60 is snappy and responsive.

In addition to a whopping great 3800mAh battery, making it a phone that will usually last a full day, and then some, the phone also supports Quick Charge 2.0. That means that if the phone doesn’t quite make it through the day, it takes as little as 30 minutes to get it to as much as 60% charged again.

NFC support also means the Cat 60 is good to go for Android Pay, or easily transferring files by tapping against another NFC-enabled handset.

It also speeds up the initial setup phase if you’re upgrading from another Android phone, as tapping the old phone against the Cat 60 will trigger the automatic installation of all your apps, contacts, bookmarks and appointments.

I’m no fan of physical buttons, but in some conditions they prove essential. This is probably one such case, where you may be working in wet environments and don’t want phantom screen presses doing strange things.

A lock function will restrict screen access (until you slide to unlock) in such conditions, as well as allowing the use of the camera underwater if you so wish.

Underneath a protective cover on the side, you’ll also find an SOS key that can be used to contact someone in an emergency, sending your location. Like the thermal camera, this is something not everyone is going to need, but if you’re not venturing off into the wilderness (but still with phone coverage), you can simply pretend it’s not there!

Above the SOS key is a bright programmable key that can perform different actions on a short or long press.

Design wise, the phone looks pretty bullet-proof, but there is a possible point of weakness on the back. There you’ll find the rear cover for the various cards you’ll need to install, and it is opened by a little flick switch.

For a waterproof phone seems like a rather embarrassing oversight because it’s not particularly hard to open, and increases the chances of it being opened by accident. The waterproof seal also looks pretty flimsy, and I discovered some moisture behind the, still closed, cover after taking some photos of the phone underwater.

Another point of concern is 2.4GHz Wi-Fi only. Not a massive problem when almost all hotspots and routers will be pushing out Wi-Fi on this band, but in congested areas you’ll long for the ability to use 5GHz access points. If that’s the case, you’re out of luck here sadly.

There’s also no fingerprint sensor, which would have made for an easier unlocking experience. Instead you’ll have to stick with the more traditional use of a PIN, password or pattern unlock.

The Cat 60 is not a cheap phone. At over £500, it’s not something you’ll want to buy just to show off the thermal imaging feature (impressive as it is). Nor is it necessarily something you’d buy because it can withstand a drop, or has a larger battery than most other phones.

However all of those features combined makes it an excellent all-round package for anyone that needs a phone that is both rugged and able to last a full working day.

The fact that it’s also a fully functioning (Cat 4 4G – 150/50Mbps) Android smartphone is the icing on the cake, and in my short time with the phone I had no less than two system updates with the latest Android security patches and other optimisations, suggesting there’s an intent to keep this phone supported, which is reassuring too.

Disclosure: This phone was provided on loan from Clove Technology, which sells the Cat 60 for £529.99 (price correct as at 5th September 2016). The phone is manufacturered by Bullitt Group.