One problem with the latest crop of Huawei/Honor phones is that the company has come up with its very own fast charging standard.

You know what they say about standards; the nice thing about them is that there are so many to choose from.

Qualcomm is pushing its own Quick Charge standard. There’s a different one for the Nexus phones (5V/3A). OnePlus coming up with yet another way of charging, and now Huawei with its own 9V/2A solution. 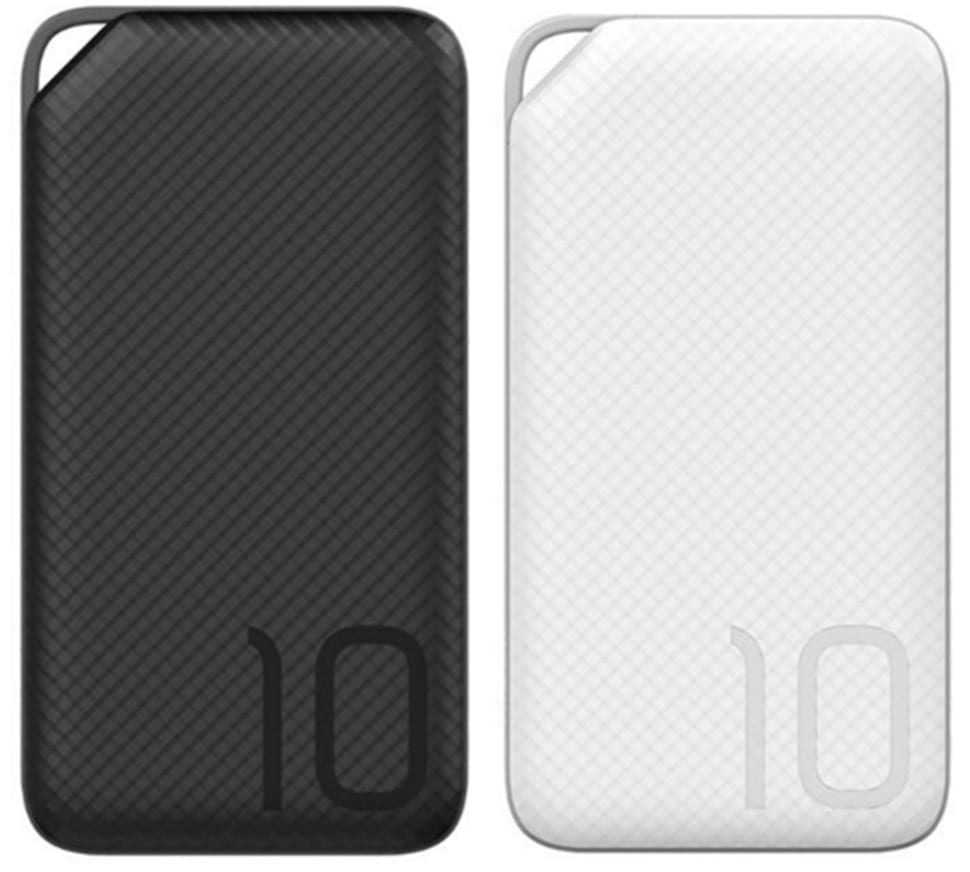 There are also competing wireless charging standards, although that method of charging seems to have gone out of fashion of late with only Samsung really taking things seriously.

At least Honor ships the Honor 8 with a fast mains charger in the box, which Huawei failed to do with the P9 (the P9 Plus, however, does) and with standalone chargers hard to buy in three-pin UK form.

In other words, many people will have to make do with relatively slow charging times, usually around two hours from zero to full. A bit unfortunate for flagship phones.

This is where the Honor AP08Q comes in. It’s a 10,000mAh portable battery pack that has support for Hauwei’s own fast charging standard – and possibly also Qualcomm Quick Charge 3.0 (unconfirmed at time of writing).

It’s not available in the UK or Europe, so I opted to import one from China.

The fast charger shaves around 30 minutes off the total charging time, with a big reduction in charging time from 0% to 50/60%.

You can read about my importing experience at the end of the review for a laugh, but first let’s see if it’s any good.

The packaging is all in Chinese. You’ll find next to no English on the box and the manual inside won’t yield a lot more info either.

Fortunately, it’s not as if you need to a genius to work out how a portable power bank works. You charge it, then use it to charge other devices. I mean, who reads the manual on the ones that come in English?

The power bank itself is available in black or white, and I chose  white. The size is pretty similar to the Honor 8 that I intend to charge with it, but about twice the thickness. There’s also a rubberised hook on one corner that’s maybe to let you hang it from a lanyard or wrist strap (neither are included in the box).

Up top are three ports, and this is where there might be some confusion if you don’t look carefully at the small text written beside each port.

There are three ports; micro-USB, USB-C and USB-A. However, the first two are inputs only, leaving the USB-A as the only way to charge your phone or tablet.

This is a little disappointing as the USB-C port could, and arguably should, have been bi-directional. What actually happens if you attempt to use a USB-C to USB-C lead from your phone is that it draws power from the phone to charge the power bank!

Now that could be useful for someone, but I can’t see the benefit of sucking power from the phone you’d want to charge. But, hey, it’s an option and perhaps useful if you have a phone or tablet you don’t mind sacrificing the battery for to get this topped up for later use.

In order to charge your phone, you’ll need an ordinary USB-A cable that terminates with USB-C or micro-USB, depending on what device wish to charge.

The charger itself ships only with a USB-A to micro-USB cable (which is approx 20cm in length), so if you want to charge a newer phone like the Honor 8, Huawei P9 or P9 Plus, you’ll need to get another cable or perhaps a micro-USB to USB-C adapter. I can recommend the adapter, such as the Choetech in the photo below, costing £4.99 for two from Amazon).

The Honor 7, last year’s flagship phone, uses micro-USB and I didn’t even realise until now that it also supported fast charging – so that’s another lot of phone users who might benefit from this.

The Honor 5X and Huawei Nova/Nova Plus phones, using Qualcomm chipsets, do not support fast charging. I have not tried a Honor 5C, but as it uses a Huawei chipset then there’s a good chance it will be supported.

Recharging the power bank itself can be done at 9V/2A with a mains charger supporting Huawei’s fast charging standard, or 5V/2A without.

With a 10,000mAh capacity, and allowing for the usual not insignificant losses when transferring power from one battery to another, I found I was able to do two full charges and then a bit extra on the Honor 8 (which has a 3,000mAh battery).

A general rule with any power bank is to assume you’ll be able to use about 2/3 of its capacity.

My testing wasn’t scientific, as the battery inside the power bank will need a few charge cycles of its own to get properly calibrated (so may improve a little in the coming weeks), but if you work on it being good for a minimum of two full recharges, you’ll not be disappointed and can consider anything more a bonus.

You can also charge any non fast charging compatible device that uses micro-USB, USB-C or I guess even Lightning with the right cable. This is at a maximum of 5V/2A.

The box also mentions an output of 12V/1.5A, which an online search suggests support for Qualcomm’s Quick Charge 3 standard, but I was unable to confirm or test this. If you know for sure, please comment below.

The battery pack and phone also seems to get no warmer when charging, which is reassuring as heat means slower charging, as well as a throttling of performance should you try to use your phone at the same time (in this respect, the Dash Charge system developed by OnePlus is quite clever, if possibly rather inconvenient and restricted to mains charging).

I will still carry my monster 20,000mAh power back (without fast charging support for Huawei/Honor devices) for longer trips away, but that is bulky and heavy and can’t be easily carried in a pocket like this.

For most days out, a 10,000mAh pack is more than enough to cope with the times when even the excellent battery on the Honor 8 can’t get me through a whole day, such as when I’ve been taking a lot of photographs, or keeping the screen on outdoors with the brightness ramped up.

This AP08Q power bank is an accessory I’d wholeheartedly recommend to any Honor or Huawei phone owner as will make a huge difference to recharging times.

The key issue is finding a way to get one at a good price, and without waiting weeks.

I hope that Honor will consider shipping over a palette load over to sell on the European vMall store, or  perhaps that someone enterprising decides to do the same and sell them via Amazon with a fair margin, but offering next-day delivery and payment in pounds.

Update: I just noticed when you fast charge, one of the LEDs goes green. 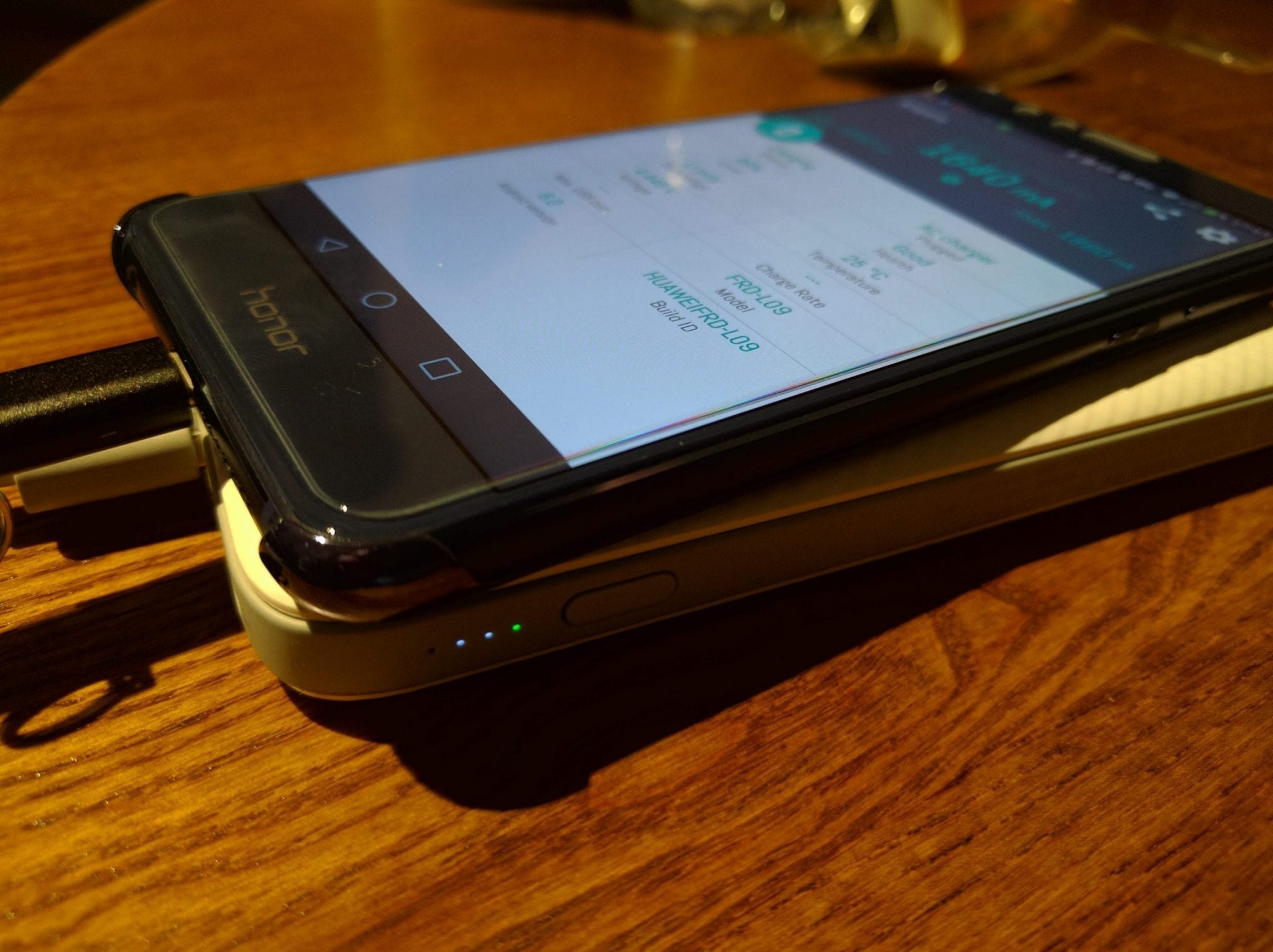 A search of the Internet took me to AliExpress, and I chose this supplier for the AP08Q charger for no reason other than it had the lowest price at the time. If looking for another supplier, be aware that the Q part of the model number is vital, as this is the model that supports the fast charging – not the AP08.

So having found the charger at US$34.08 (approx £26) and with free shipping, it seemed like a bargain.

But, I’ve had free shipping from Hong Kong before and it can take many weeks. The site estimates 20-40 days and that can be a tad optimistic (try nearer 60 days), so I opted to pay for express shipping at a further cost of US$37.49 (approx £28) to bring down the shipping time to 7-15 days.

The upside is that in just four days, I was surprised to get a knock on the door from UPS with a package. This was the same day I’d got an email to say it was shipping, which I now suspect was meant to say it was out for delivery.

I was most impressed, until the driver dropped the bombshell that there was money to collect. The charge? £20.79 for VAT and brokerage charges. Ouch.

All in, this accessory cost me a grand total of £75, give or take a few pence.

I knew I was paying a lot for the fast shipping, but the import duty, VAT and other handling fees was a real kicker.

It’s why there needs to be a supplier in Europe for these, or else if you’re going to import one yourself (and I do still recommend it) you should probably have a little more patience than me and go for the free shipping option. Who knows, you might be lucky and get it in under a month!

The following link is the exact source of my purchase. There are other sellers too.

If you know of any supplier in Europe that can supply quicker, or cheaper, please post in the comments below.