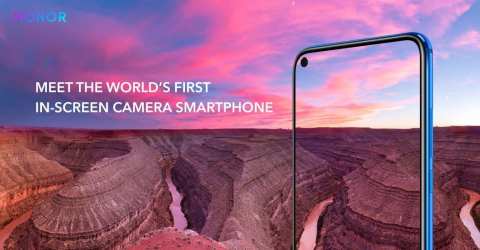 Honor has today showed select media the forthcoming Honor View 20, which will be unveiled officially in China on December 26th, and then in Paris on January 22nd 2019.

The full specs of the phone won’t be known until the first of the two launches, but Honor was keen to show off two key features.

First, the full-screen display with a notch replaced by a small cut-out for a front-facing selfie camera (the diameter being 4.5mm).

The View 20s at today's not-a-launch event in HK were hidden in 3D-printed lunchboxes, but that didn't stop these macro shots of ~the hole~ pic.twitter.com/mxZyMOzVQY

It’s interesting to see that Honor, which like Huawei, has favoured dual-camera setups for some time (or even more sensors since the Huawei P20 Pro came along) has gone for a single camera this time.

Paired with the flagship Kirin 980 chipset, and the ongoing development of things like AI Stabilisation for better night shots, it would seem that Honor will be using software to get the most from the camera, in much the same way as Google has been doing things with its Pixel phones for some time now.

It isn’t just Honor that seems to be getting into the embedded front-camera idea, as an alternative to the notched screens that dominated 2018. Huawei, Samsung, Xiaomi and more are likely to announce their own creations – some possibly before year end.

The jury is still out on whether this is an improvement and debates are likely to rage on throughout Christmas and into next year as other solutions are tried and tested too.

This could be from more slide-up cameras, or manufacturers ditching the front facing camera entirely. This could be through the use of a secondary display on the rear, or maybe even a company being daring enough to just market a model to those who have no desire to take selfies or make video calls.

We redefine the smartphone experience with the launch of Link Turbo. It can automatically analyzes users’ usage models and network conditions to switch seamlessly between Wi-Fi or 4G networks and boost downloading speed by adopting both networks. #HONORArtology #HONORView20 pic.twitter.com/gl8y7Z9LeV

One more feature that Honor showed off in a slide at its low-key event was ‘Link Turbo’ that can aggregate a 4G and Wi-Fi connection for faster data, and seamlessly switch between both services as required (an extension of the existing Wi-Fi+ feature).

I’m looking forward to finding out more about this phone, but what do people think about this new form of notch/hole? Is it less intrusive? How will things work when you want to view photos and video? Will artificial bezels be created top and bottom to keep things symmetrical, or will we just have to get used to what looks like a giant dead pixel?!