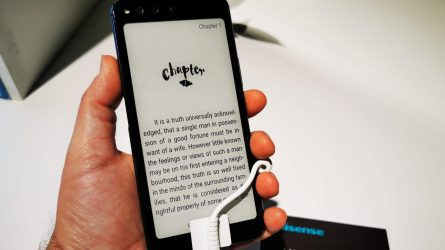 I’m always on the look out for something exciting at any show, and HiSense caught my eye – not for their admittedly impressive TVs or fridges – but for two phones with e-Ink displays.

The A5 has only a single display, meaning it’s the e-Ink way or the highway. However, with a (to me) impressive refresh rate, I found the handset was responsive enough to probably let me do pretty much everything I need to do that isn’t video related.

Yet, the A5 has a camera and can take photos and video. It’s just that you only get a very grainy greyscale representation of the photo or video you’re recording. The camera itself is 13-megapixels, so isn’t going to win any awards but should still be perfectly functional. Up front is a 5-megapixel selfie snapper.

The phone also has YouTube, and presumably can stream and play video even if it won’t be very watchable. For YouTube you may want to forego picture clarity and just listen to audio, or just check the video you recorded very quickly – before sharing or uploading for later editing on a laptop or desktop.

The A5 also has a 4,000mAh battery. Given a screen, especially on a bright day, is a major source of power consumption, the e-Ink display will probably allow this phone to go on for ages between charges.

Besides the great battery, the A5 also features an octo-core SoC, 4GB RAM and 64GB of storage.

And on a bright day, as any e-reader owner will testify, these screens are even more readable (in fact, there’s a backlight for when it’s dark or else you’d see nothing at all).

For anyone not totally convinced that they could make do with only a black and white screen, HiSense also has a dual-screen model (the A6L) with a full colour display on the front, and an e-Ink display on the back. Although, depending on your priorities, you may prefer to consider them as being the other way around.

I have no idea if HiSense showing these off in Germany means they’re likely to come to Europe, and in particular the UK, but I sure hope they look into it – or you can potentially import one and use it on our phone networks.