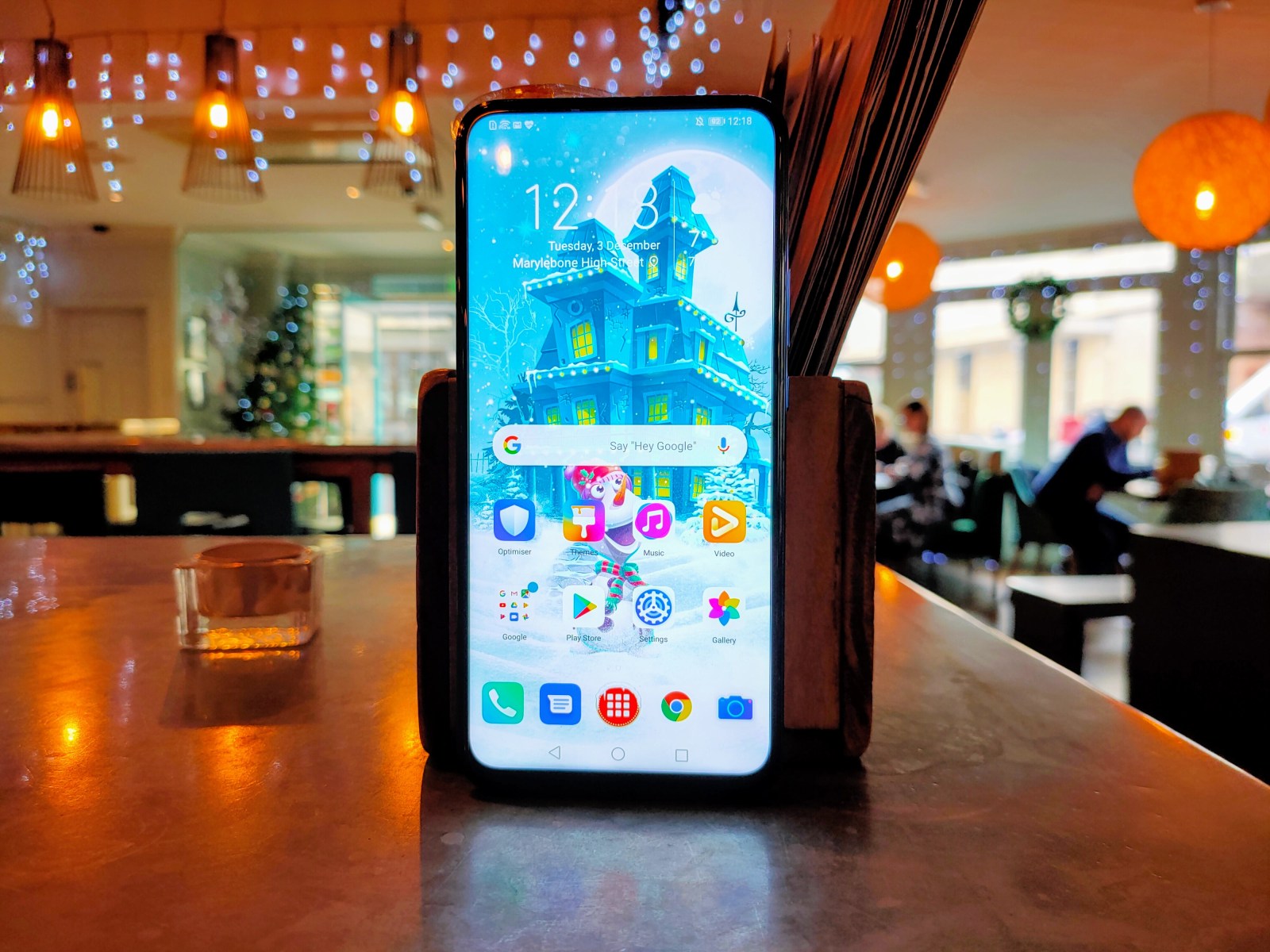 With a large screen, decent battery and a power-efficient mid-range chipset, the Honor 8X was a great phone. One year later, Honor is hoping to repeat its success with the Honor 9X.

This time the phone comes with a totally notch-free display, made possible due to a motorised pop-up selfie camera.

Note: The Honor 9X on sale in the UK is different to the Chinese model, replacing a more advanced Kirin 8-series chipset with a Kirin 710F SoC based on last year’s model.

The first thing to note is the Honor 9X has a plastic back. It still gets a shimmery effect reminiscent of glass-backed models, complete with an ‘X’ effect that moves around when the light catches it the right way.

When uncased it doesn’t feel as solid as other devices, but the use of plastic may be a benefit in terms of resilience, and with the bundled clear case you won’t feel the difference day-to-day.

The best part of the phone by far is the large 6.59-inch display. The LCD screen comes with a resolution of 1080×2340 pixels, and with no notch due the pop-up camera it really does look the part.

With a total of 391 pixels-per-inch, and nothing to get in the way of things, it will incredibly appealing to those wanting to watch movies or play games, albeit with the latter having to contend with a lower performance than otherwise might have been, were it not for the last minute switch to an older chipset.

A rear-mounted fingerprint sensor may not be considered cutting-edge these days, but it’s perfectly positioned and to quote the late Steve Jobs’,”it just works”.

It’s fast, accurate and quick to set up so there are no complaints here.

Oh, and next to the single down-firing speaker you’ll find a 3.5mm headphone jack too.

Honor has sought to add premium camera features to its lower end models for some time, and with the Honor 9X you get three cameras positioned on the back.

For the primary camera, you get the common Sony 48-megapixel camera with an f/1.8 aperture, but no optical image stabilisation this time around.

In good light, it performs as well as you can expect from the multitude of phones using the same sensor, although it doesn’t work as well in low-light as models with wider apertures (the Honor 20 Pro has the same camera, with an f/1.4 aperture as well as OIS, with far superior results).

Coupled to the primary camera is an 8-megapixel ultra-wide camera (f/2.4) and a 2-megapixel depth-sensing camera.

This means there’s no telephoto capability, although you do get a 6x digital zoom that is really not bothering with. Just take a normal photo and crop as required for a better result in almost every case.

For video recording the phone tops out at 1080p 60fps, which is perhaps to be expected given the older chipset. While there’s no image stabilisation on the stills side, if you switch to 720p for video then you can get an electronically assisted stabilisation mode for an ‘action cam’ style experience.

Finally, the main reason the screen is so nice is the motorised camera that was once the preserve of high-end phones. That it now features in a phone costing less than £250 shows how far we have come in such a short space of time.

The camera itself is a 16-megapixel resolution f/2.2 setup, with video recording up to 1080p at 30fps only.

Unlike other phones with a pop-up camera, the motorised action is noticeably slower.

It’s almost two seconds to fully extend, and the same in reverse.

The phone will detect a sudden drop movement, but the time to retract has to be taken into consideration.

There’s a chance the phone might hit the floor before it has fully returned to safety, but I didn’t attempt to try it out on my review unit.

I wouldn’t worry too much, however, as you usually have a pretty firm grip when taking selfies and for everything else the camera will be hidden away anyway.

Using essentially the same chipset as last year’s Honor 8X, it might seem as if the phone is less able to compete amongst the competition.

With 4GB of RAM and 128GB of (expandable) storage it isn’t cutting edge RAM wise, but 4GB of RAM isn’t really a problem for Android unless you’re constantly switching from memory-hungry apps to another.

128GB of storage on the other hand is respectable and probably sufficient for most usage cases, whether downloading large game files or lots of films for offline viewing. There’s a memory card slot that can boost the storage by another 512GB anyway.

The phone comes with dual-band 802.11ac Wi-Fi (V5) and now USB-C (the Honor 8X retained micro USB, which was rather frustrating). There’s no SuperCharge support, but slower charging is perhaps to be expected for a more budget phone.

And just like last year’s model, the phone continues to sip miniscule amounts of power in standby mode.

The 9X is a phone that offers the same sort of battery confidence as with more expensive phones like the Honor P30 Pro or the Oppo Reno 2.

When it comes to performance, the phone does fine but isn’t going to win any awards. It can run games like Call of Duty Mobile, but only with the lowest graphic settings enabled.

I managed to play the game without seeing any noticeable frame drops, and it meant that for gaming the phone is perfectly usable even if you won’t get the absolute best graphical experience.

The UI is smooth at all times, but when running benchmarking tests you’ll quickly see that the GPU performance is a far cry from more modern chipsets. For the latest tests, the phone quickly shows its deficiencies and frames are dropped left, right and centre.

It is a little unfair though, as normal games are always designed to run on a variety of different chipsets and will adjust various parameters to stop it looking like an unplayable mess.

Had the 9X come with the newer chipset used on the Chinese models, I have no doubt the scores would have been considerably higher, but it is what it is.

Given Huawei’s (and therefore Honor too) problems with the USA and Google, it was either have this chipset or don’t release the phone at all.

The phone has full support for all Google services, including Google Pay, plus the promise of updates going forward.

It’s unfortunate the Honor 9X isn’t as powerful as it could have been, but the Kirin 710F is used in other devices like the Huawei Mate 20 Lite, Huawei P30 Lite, Honor 10 Lite, Huawei P Smart 2019 and many more so it isn’t some reject bin chip.

As long as you’re not after taking loads of photos after dark, and can live without a camera zoom in favour of improved portrait shots, there’s plenty to like about the phone.

The thing to love most is of course the screen, but the excellent battery performance can’t be forgotten. Coupled together, you’ve got an awesome device for media consumption and gaming, with plenty of storage even before you look at adding a memory card.

Even the cheaper build quality isn’t an issue once you put it in the supplied case (or indeed any case), so all things considered the phone hasn’t suffered too badly on account of the last-minute component changes.

If £250 still seems a little high, you can likely expect to see discounts and promotions in the coming months and if that happens, it might become too hard to resist.

Until then it is a highly affordable phone for those wanting a big screen device that is very competent in multiple areas, even if not class-leading.

Honor recently invited a selection of the media to dismantle a Honor 9X and learn more about the components used.

It wasn’t immediately clear why they decided to let us loose with screwdrivers and destroy a bunch of handsets, but the intention was to show the calibre of components used on a highly affordable phone.

The only problem is that none of us were engineers (to the best of my knowledge), and I had no real frame of reference on whether these components are better or worse than in another phone.

It was a fun experience though, and gave a little insight into what is inside a phone and how it all fits together.

It was certainly nice to see how much effort is put into the design to allow for such a large capacity battery.

The Honor 9X is available in midnight black or sapphire blue for £249.99.