At 3pm UK time, Pebble unveiled its new smartwatch, called Pebble Time, and the company has returned to Kickstarter to attract investors in the watch that is due to go into full scale production in time for a May release.

Pebble is already breaking loads of records, having raised US$2m in the first hour of going live – and still counting. The initial $500,000 goal was reached in around 20 minutes!

Suffice to say, rather than write too much here, anyone interested should race along to the Pebble Kickstarter page to find out more about the watch itself (there are video demonstrations about the new user interface), and invest if interested.

Although there should be no risk now the goal has not only been reached but totally smashed, it’s worth remembering that any investment on Kickstarter comes with a level of risk. 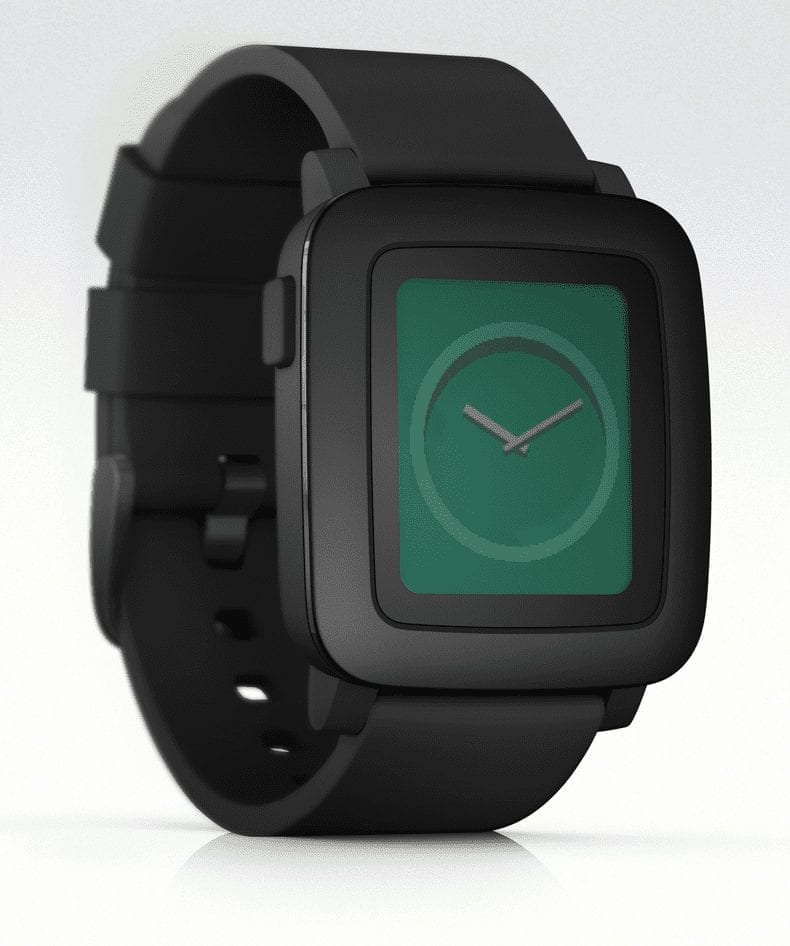 The other good news is that existing Pebble and Pebble Steel users will also be able to get the new Pebble Time interface on their watches later in the year, although only the new watch – with it’s colour e-paper screen – will come with a microphone to let you dictate messages to your phone and perform other functions still to be confirmed.

Pebble also teases on its site about a new smart accessory port “enabling hardware developers to build sensors and smart straps that connect directly to the watch”, which sounds rather intriguing. More information on that will also be revealed later.

If this could also include smarter straps with integrated batteries for even longer battery life, it could really be exciting. However, like the original Pebble watches, the Pebble Time watch should still be good for up to seven days between charges.

But, for now, what are you waiting for? The end of time? Get over to Kickstarter to show your interest, because early adopters will stand to receive their order from late May onwards, while everyone else will have to wait until nearer the end of the year – as well as paying more.

Update 2220 GMT: Not even eight hours after going live, the fund is at just over $6m. Where’s it going to be by morning? 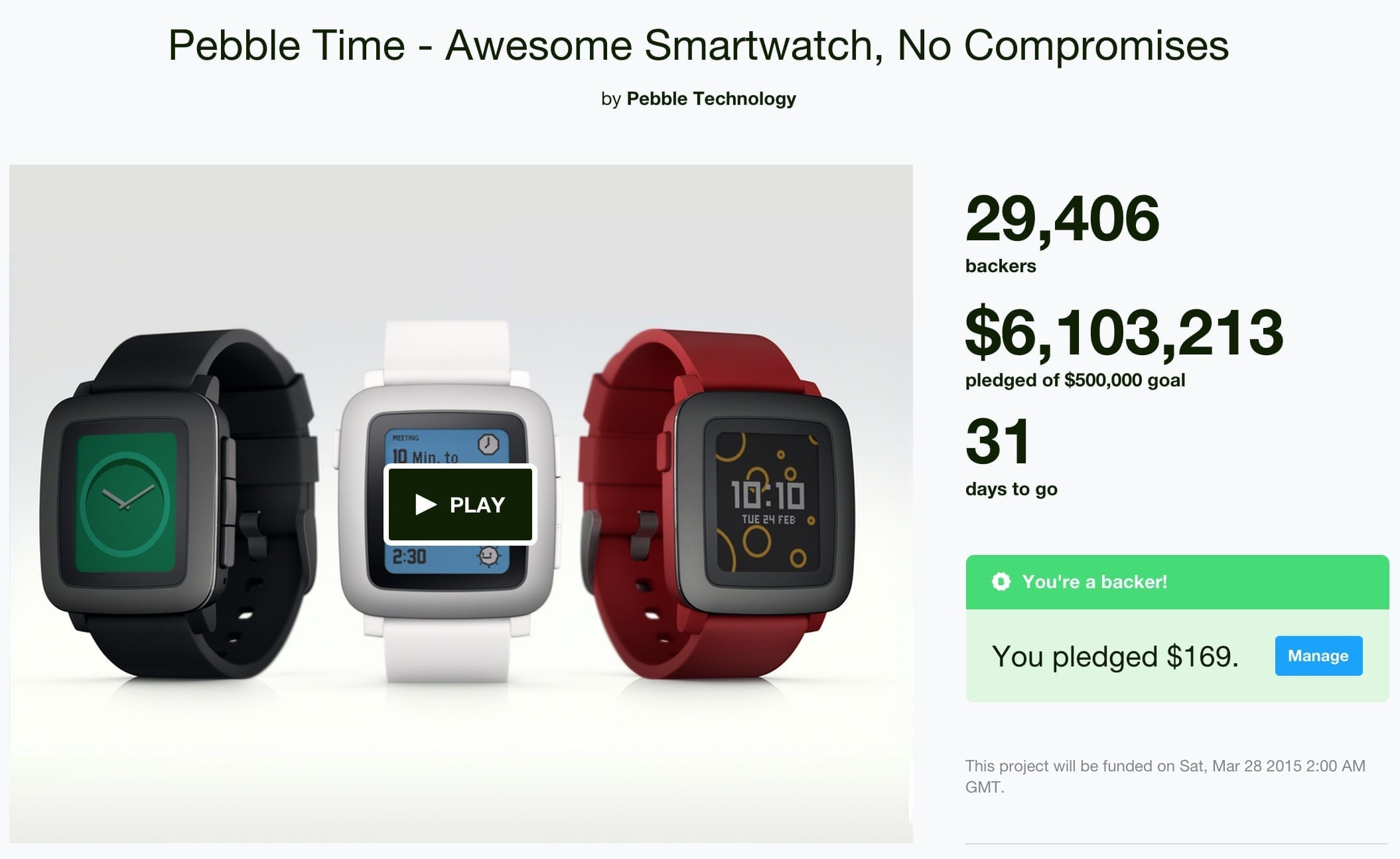 FOR WORLDWIDE DISTRIBUTION ON
TUESDAY, 24 FEBRUARY @
7:00 AM PST

10:00 AM EST
15:00 GMT
Introducing Pebble Time: The Watch That Knows You and Your Daily Routine

Palo Alto, CA (24 February 2015) — Pebble Technology Corp., the smartwatch pioneer and a Kickstarter record-holder, is proud to launch its brand new watch, Pebble Time, on the same community-driven platform that helped them introduce smartwatches to the entire world three years ago. Everything about Pebble Time — from its new technology to the reimagined software interface — was meticulously designed to mesh perfectly with your life. Starting today, anyone can back Pebble Time on Kickstarter athttp://pbl.io/kickstarter.

Pebble Time introduces a new microphone, allowing you to send voice replies to incoming notifications or compose short voice notes. Using the latest technology, water resistance is maintained, so you can swim, shower and surf with Pebble Time.

Pebble Time is 20% thinner than the original Pebble, with an ergonomic, curved design that’s comfortable on any wrist. The lens is crafted from scratch-resistant Gorilla Glass and the bezel is made of stainless steel. The watch band incorporates a quick-release mechanism, making it easier than ever to personalize your watch. Pebble Time also has a smart accessory port, enabling hardware developers to build sensors and smart straps that connect directly to the watch.
Like other Pebble watches, Pebble Time is designed to work perfectly with both iPhone and Android smartphones. Pebble Time is compatible with iPhone 4s and newer phones running the latest version of iOS 8. Pebble Time works with all Android 4.0+ phones including Samsung, HTC, Song, LG, Google, Motorola, Xiaomi and more.
New Timeline Interface Helps You Accomplish More Throughout The Day

Building a modern timepiece requires focus on software as much as hardware. Pebble Time introduces a new version of Pebble operating system (OS) that organizes relevant information like notifications, weather, news, travel, and reminders chronologically. With one click you can see what’s coming up next, such as a reminder to pick up your kids or when a movie starts. Pebble Time also helps when you need to catch up on things that happened in the past. You can scroll back to see an email you missed, your step count for the day, or the score from the game last night. Now, instead of opening an app just to see the weather, or to check the market, you can reliably get the details you need at a glance.

Pebble Time is fully compatible with all 6,500+ existing Pebbleappsandwatchfaces, surfaces information at the moment it’s most useful, and enables quick action. Pebble is working with The Weather Channel, ESPN, Jawbone,Evernote, Pandora and others to build unique experiences for the new OS and more partners will be announced soon. As with all Pebble software, Pebble Time is built on an open platform, and introduces many new APIs and tools for developers.
Staying Connected with Pebble’s Community

“Pebble was first brought to life by 69,000 backers and people who supported our vision three years ago. We could not think of a better way to share our new watch,” said Eric Migicovsky, Pebble CEO. “With Pebble Time, we’re launching completely new hardware and reimagined software while keeping all the things people love about Pebble.”

“With Pebble’s first Kickstarter campaign, they successfully introduced smartwatches to the world,” said Yancey Strickler, Kickstarter CEO. “We’re thrilled Pebble has come back to Kickstarter to share their latest innovation. As enthusiastic members of the Pebble community, all of us at Kickstarter are excited to help them again bring an exciting vision to life.”

Pebble Time is available in three colors for $159 exclusively on Kickstarter, with worldwide shipping to backers starting in May. Later this year, Pebble Time will retail for $199 and be available online at getpebble.com and in stores worldwide.

One thought on “Pebble returns to Kickstarter with latest smartwatch – and beats all records in record time!”