I’ve had my ‘Kickstarter Backer’ Pebble Time for about two weeks now, and in that time I’ve had people asking when I’ll finish my review. It’s fair to say that I should have written my thoughts earlier, but I wanted to try a few things out properly.

First of all, the reason I loved my original Pebble smartwatch was because it was so simple. It wasn’t a watch trying to replace my phone. I am not a big fan of using touch on a watch, or remembering gestures and movements to navigate different functions. For the most part, I don’t want to be engaging with my watch much at all.

A simple display with buttons for back, up, down, and ‘select’ suits me fine – and it operates everything with ease because all developers know exactly how it is supposed to work. 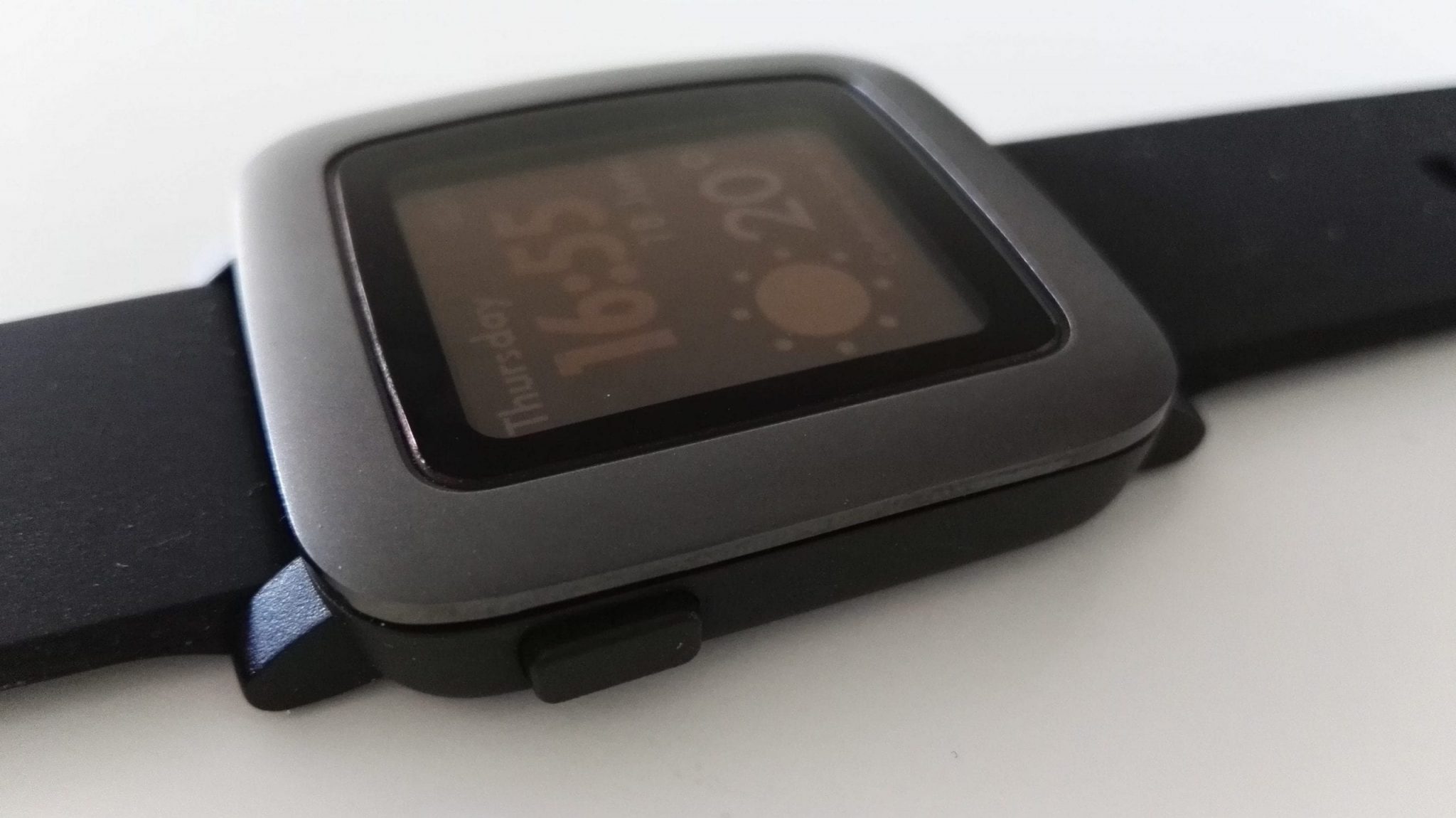 I didn’t buy the original Pebble for its great design, although the black model I bought was pretty inoffensive and I never received any negative comments. Not that many people outside of the tech world ever knew what it was. Still, that suited me just fine.

Someone buying an Apple watch might convince themselves it’s some sort of investment, or a statement, but for me it’s a tool. And tools need to be good at what they’re designed for.

The Pebble Time is, to me, a nice looking watch. In black, with its dark grey metal surround, it continues to look understated, but it most certainly does not have the ‘Fisher Price’ look that I feared.

It’s important for me to state that I also backed the Pebble Time Steel, so will be getting one of these in July to then compare side by side. But, had I not backed the steel model too, I can safely say I’d be perfectly happy with this. 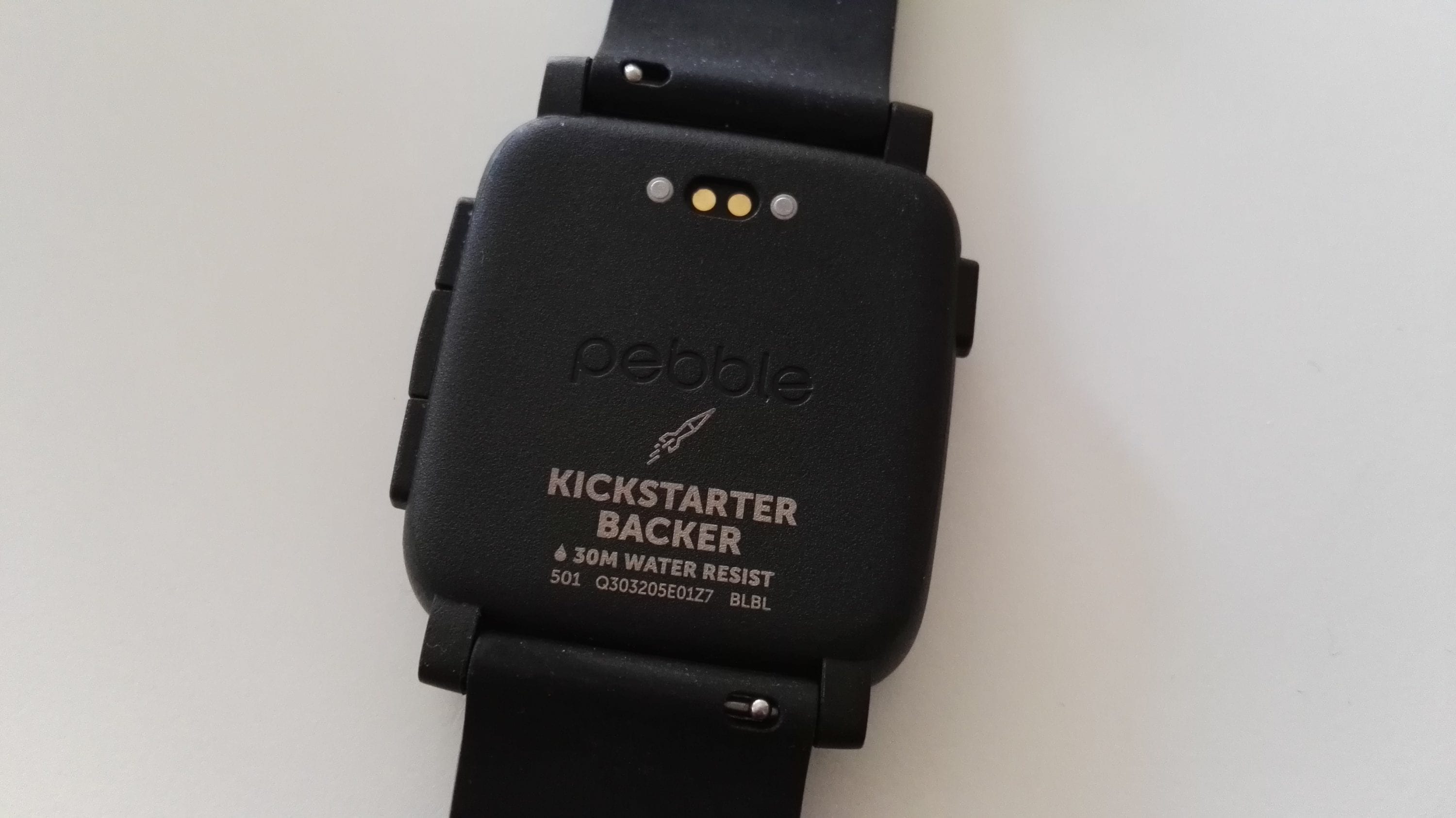 I have found that by leaving the watch on when showering, I did begin to get a bit of a rash on the skin. Suffice to say, keeping the plastic strap dry is probably a wise move (if you go swimming with it, take it off afterwards and dry thoroughly) although an alternative is to buy a different strap. The Pebble Time uses industry standard 22mm straps, with a quick release system to make it incredibly quick to swap. 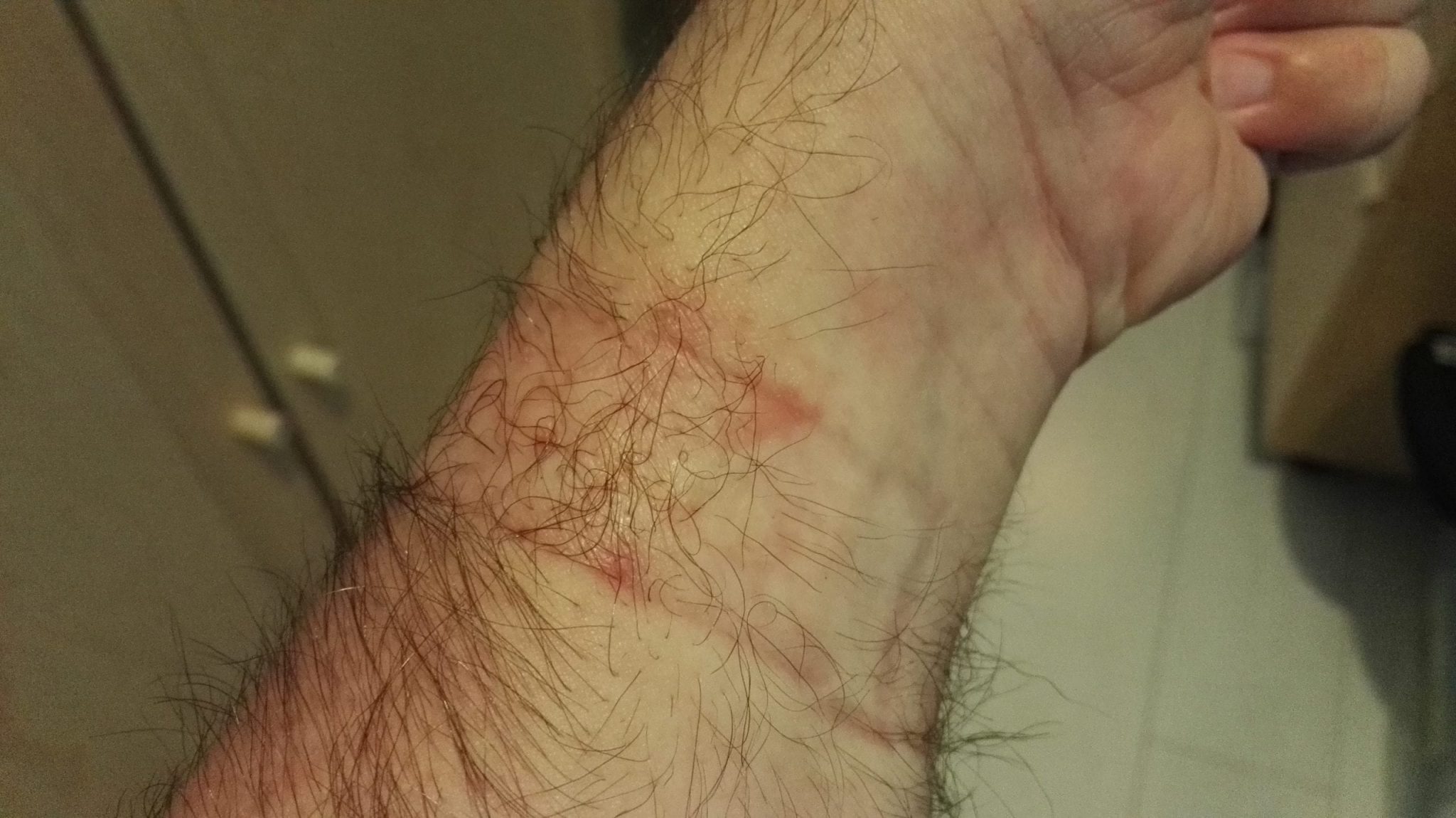 What time is it?

Telling the time is a vital part of a watch. I’ve continued wearing a watch even when plenty of people have given up and just check their phone periodically. For me, a watch is an essential part of me. As much so as carrying my phone, wallet, and keys.

The Pebble Time, like its predecessor, shows me the time all the time. It never goes off, and it never requires a shake or button press to bring the display on. That’s not just a ‘nice touch’, rather an essential feature. 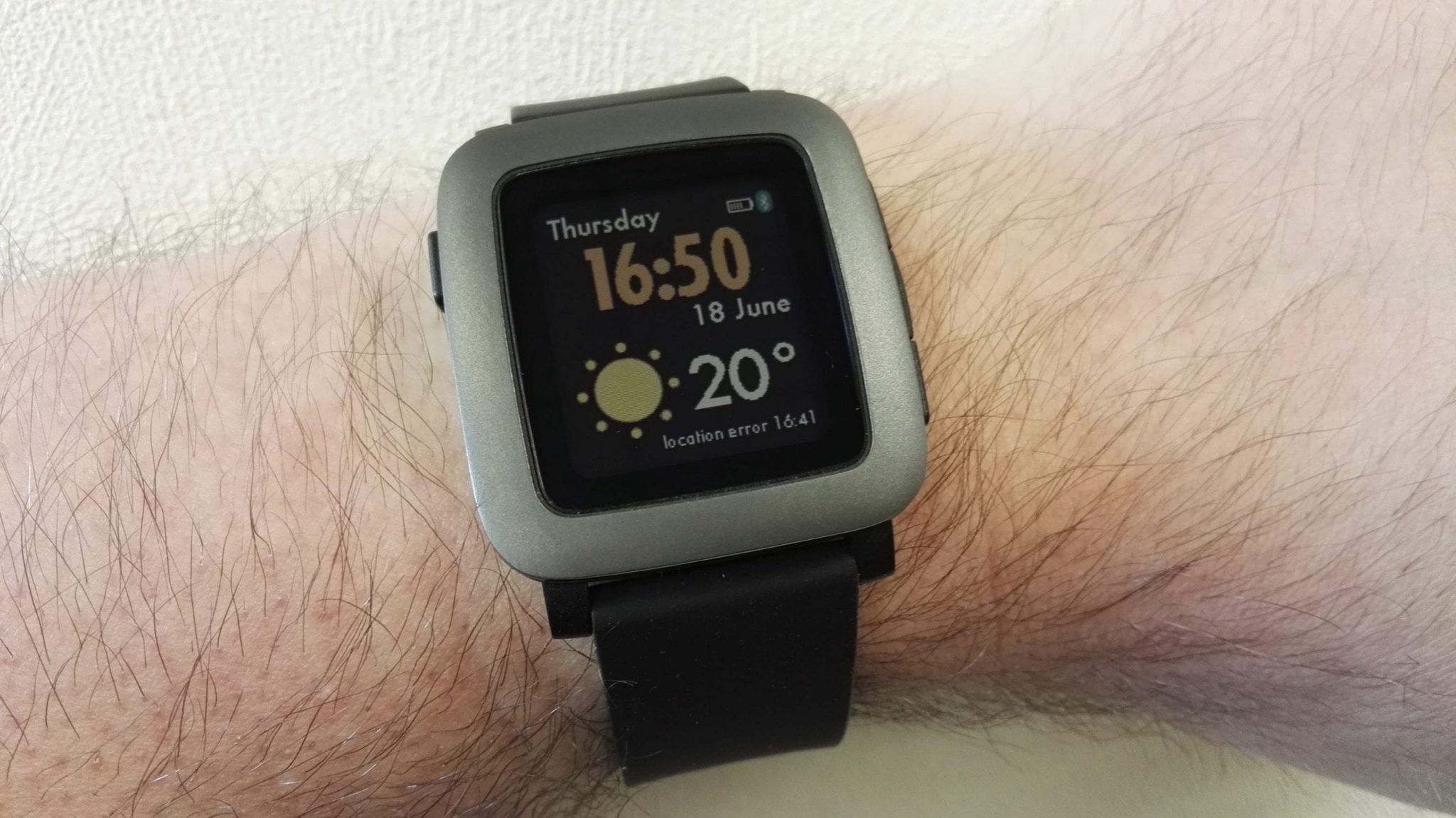 The display technology allows for the screen to stay on constantly without killing the battery in a matter of hours, unless you decide to use a fancy animated watchface for fun. However, even with a watchface that updates every second, you’ll still be able to keep going for a couple of days with ease. With a more static face, four to five days is easily, and safely, achievable.

When you get a warning that the battery is down to 20%, that’s probably a warning that you’ve got maybe 24-36 hours left. 10% might be 12-24 hours. If you get down to 1%, although I’ve not yet been there, the phone switches off and displays only the time for a further 10-12 hours. So, even if you do get caught out, you’ll still not be left with a totally blank screen.

My personal choice of watchface is one that can also show me the weather, and sometimes upcoming appointments. There are many hundreds of watchfaces available, with more and more being created or updated to work on the colour display.

It’s great fun searching through the watchfaces on offer, or asking others on social media what they’ve got. So much better than having to choose from a limited list, with limited customisation options. There are even online tools to generate your own.

Fitness tracking is also built in, although there’s no heart rate monitor, but you have to choose the fitness app you want. In my case, I went with PlexFit, which sends all the data to Google Fit. There are others, and many also monitor your sleep. The good thing here is that you can actually afford to leave the watch on overnight, whereas many other smartwatch users will be using that downtime to recharge. 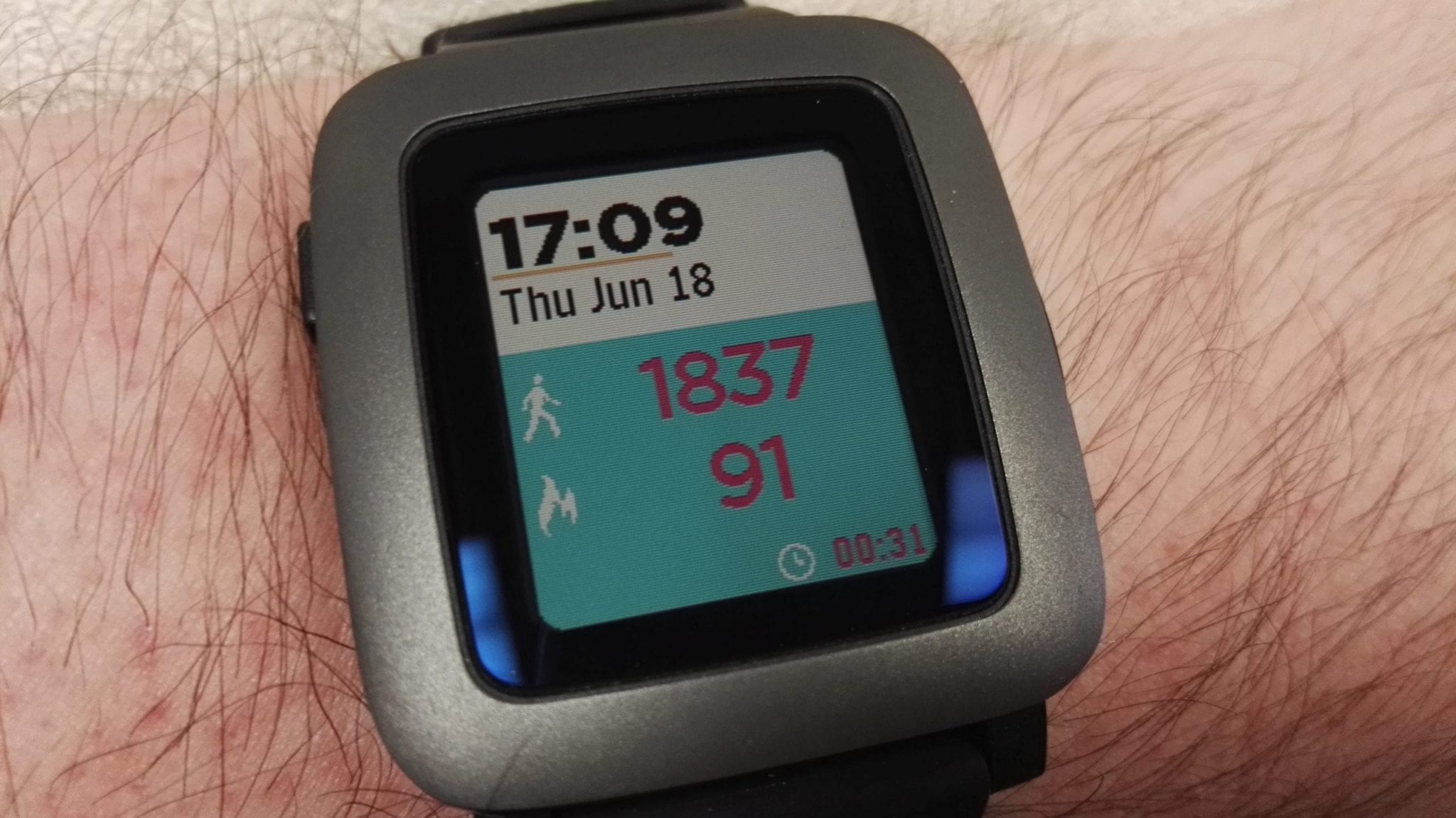 With the new Pebble Time and Pebble Time Steel, there will soon be more functionality added via smart straps – but I’ve not yet seen anything in the flesh, so this is one aspect that can be considered a work in progress. Whether we see heart rate monitors added, or simply bigger batteries (or both), remains to be seen.

Won’t let you down

Battery anxiety is a huge problem for all smartphone owners today, and I really don’t need to be worried about my watch letting me down too. With my old Pebble that was never a problem, and I was able to go on extended weekend breaks, or to events like CES and Mobile World Congress, without even taking the charger.

There’s a continued confidence with the Pebble Time, which appears to last even longer. The forthcoming Pebble Time Steel will have an even bigger battery, promising up to ten days between charges. 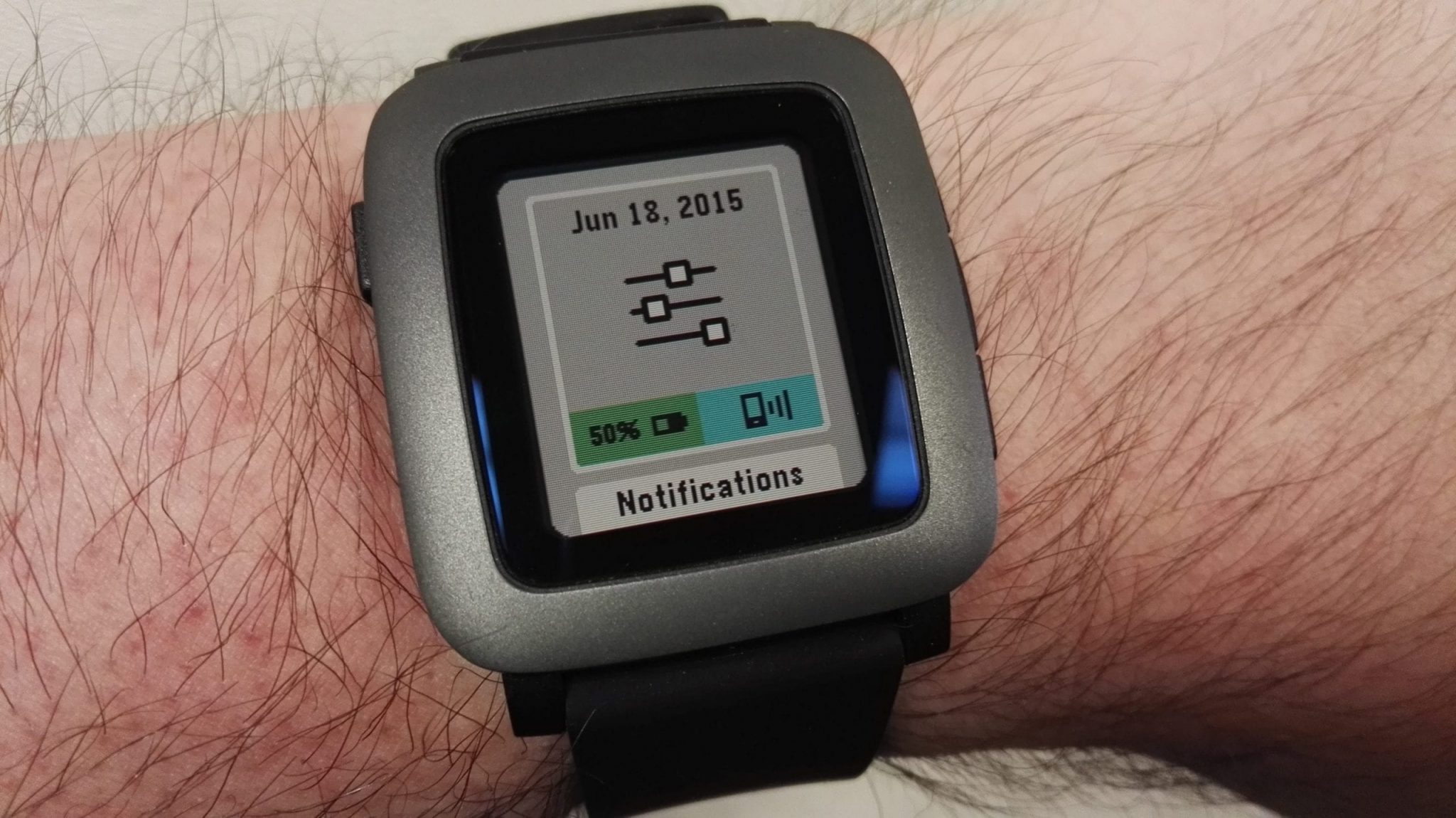 On one occasion, I managed to get the backlight stuck on. No doubt if I’d not noticed (perhaps if I was outdoors) then this could have been a problem, but it was quickly fixed by pressing the back button. I assume that there are going to be a few bugs in the original release firmware, and Pebble was probably pushed for time to make their delivery deadlines.

So far I’ve not had an update for the watch (unless it’s been done without any notification) or the Pebble Time app (Android) but for the most part, the watch has never crashed or glitched. If there’s one concern, it’s that you need quite a strong flick of the wrist to turn on the backlight – and hopefully that can be tweaked in software. Or you just press a button to turn the light on instead.

As I said at the outset, I’m not really bothered about apps. I have an app to show me bus times from my nearest stop, and I’ve also dabbled with NavMe to relay directions from Google Maps (it’s pretty good), but the other apps I’ve tried have only been looked at because I feel obligated to.

I really want little more than notifications, so I can decide if I need to get out my phone to do something. My phone has an eight-core CPU and a large full-HD screen. My Pebble Time simply can’t compete, so why even try? 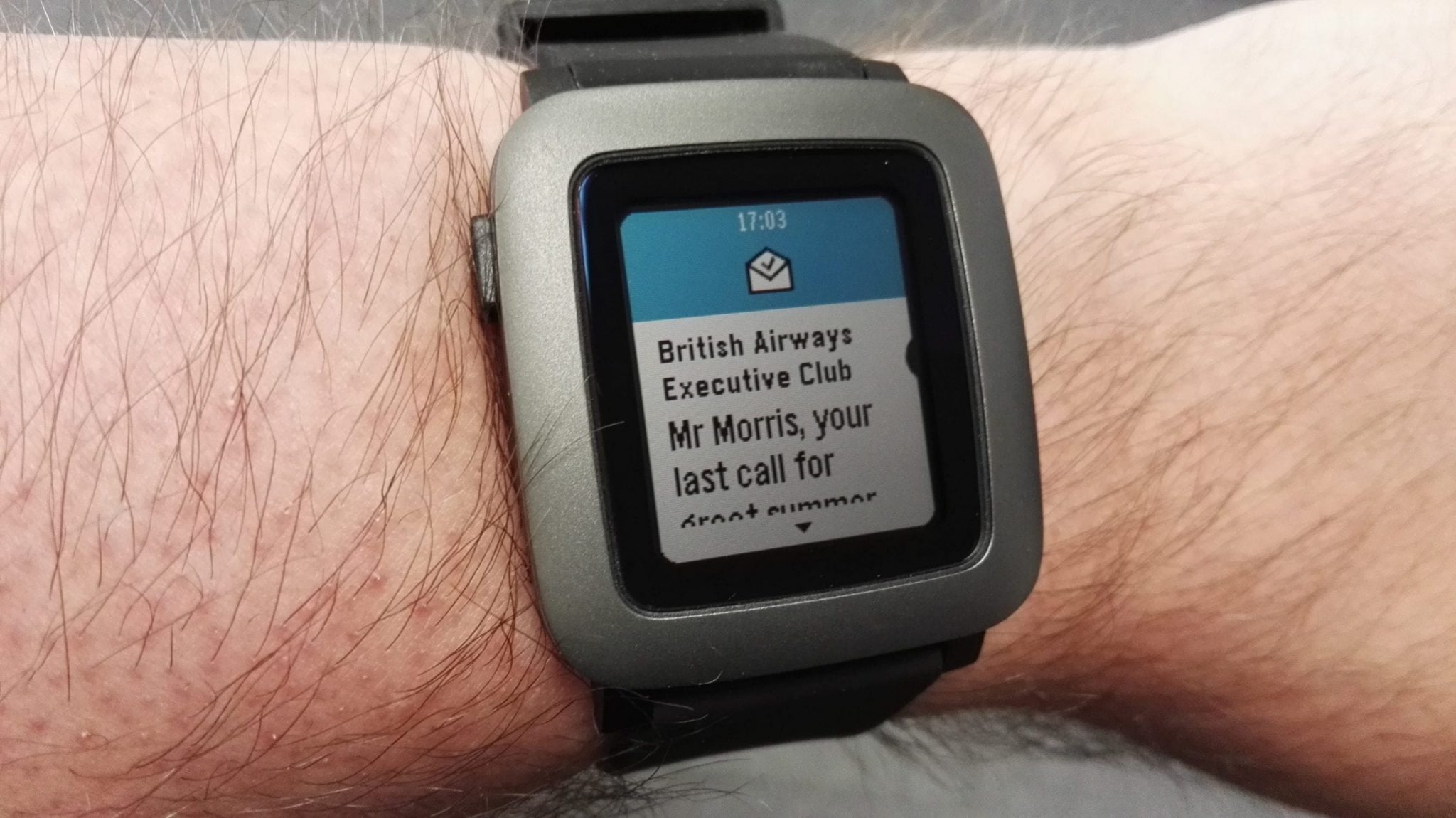 For each notification, I can easily glance at the screen and decide to dismiss it, or act upon it. A quick press of a button can open the relevant app on my phone, while in some cases like receiving a text message, I can dictate a response using the built-in microphone, or choose text from a pre-defined list.

The Pebble Time UI itself, which lets me press the up button to show events just gone, or down to see my next appointments and then step ahead a day or two for other events, is simple but effective. 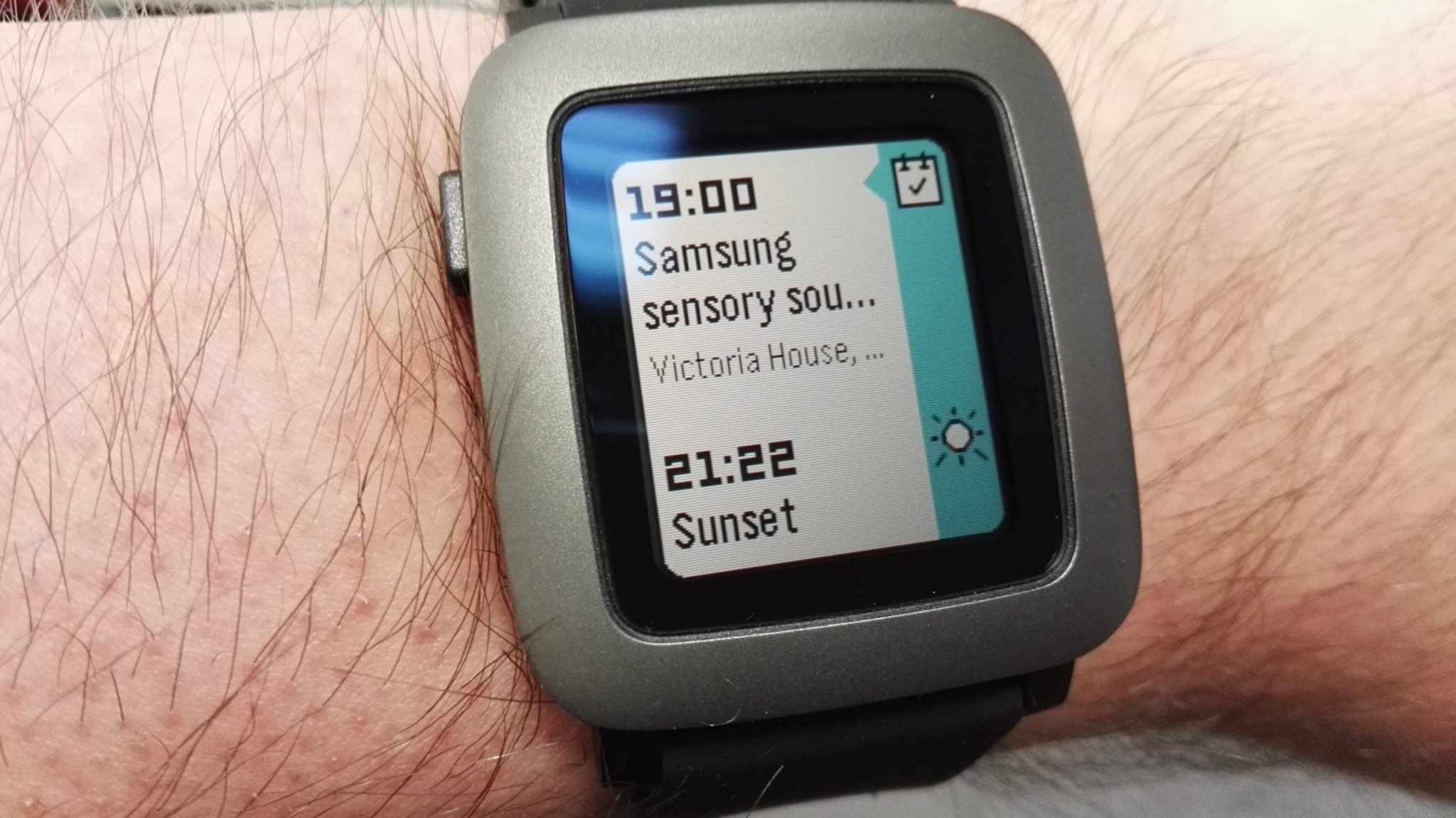 It is obviously only as useful as the information put in to my diary (in this case, via Google Calendar) but it does populate itself with data taken from other sources. It will show me calls I’ve made and received in the past, as well as birthdays, sunrise/sunset and minimum and maximum temperatures for each day. No doubt in the future, other things will be added in to this clever time line layout, which has plenty of potential for growth. 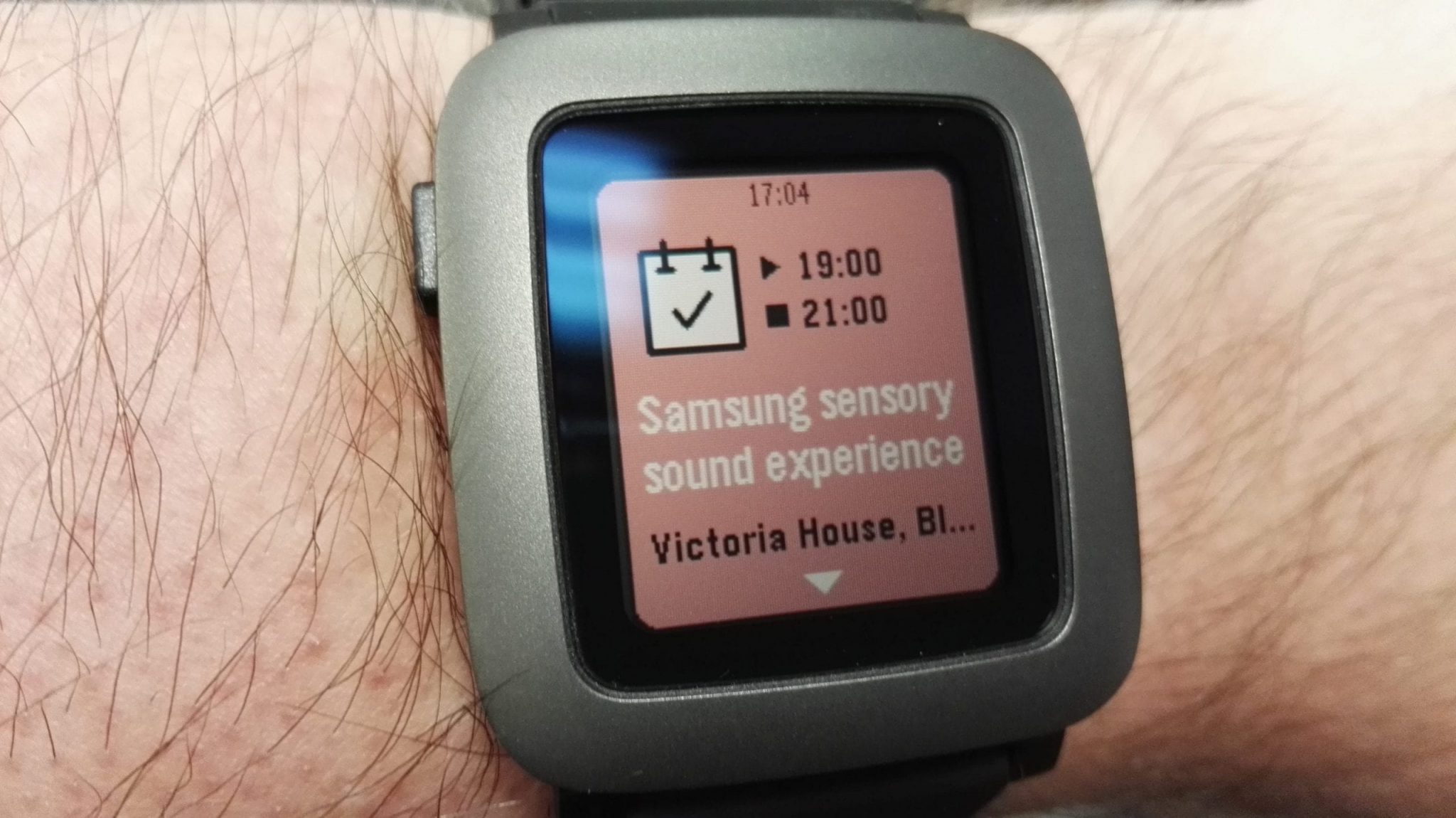 Having physical buttons makes it very easy to scroll through and interact, and the original Pebble and Pebble Steel models will soon get this new interface as standard. That does mean that if you’re not bothered about a colour screen, the ‘old’ models are still going to be every bit as functional for the most part. No microphone or smart straps, obviously.

The colour screen is reminiscent of the type of colour screen you’d have expected in a mobile phone from the start of the 2000s, albeit with a higher screen refresh rate. And just like those old phones, the screen benefits greatly from good light – most notably when outdoors in the sun.

It’s the exact opposite of most smartphones today that only offer good sunlight visibility with the brightness ramped up to the max, killing the battery in the process.

The Pebble Time in the sun needs no light at all and looks all the better for it.

The downside is that once the light fades, the screen is rather less impressive. It’s when you need a shake of the wrist to trigger the backlight in many dark environments.

Part of the problem isn’t so much the screen, but the watchfaces and app designs. Developers who were desperate to update old watchfaces and apps for colour didn’t have a real watch to test on, so just assumed the nice high-contrast display on the developer tools was exactly like the watch. Wrong.

Anyone who had an early generation mobile with a colour screen quickly learned that you had to be very careful about what colours to use, and how to adapt the brightness and contrast of images to make them look good in varying conditions.

It’s something that will be fixed, and indeed many watchfaces look great. Ironically, some of the black and white faces look best of all.

You can probably argue that I have rather low expectations from a smartwatch, and I’m not going to be upset by anyone that points that out. I suspect rather a lot of people unsure about whether to buy a smartwatch might be rather similar to me too.

As smartphone sales reach saturation point, and tablet sales are falling, the entire industry is desperate for smartwatches to become successful – and create a new revenue stream.

Apple and others have their views of where smartwatches are going, and how they can operate like mini computers on your wrist, but ever since I first got my Sony Ericsson/Fossil smartwatch back in around 2009 (which only showed me the name of someone calling – or what track I was listening to), I’ve had the belief that a watch should only relay key information to me. I use my phone for everything else.

Perhaps one day, everyone will use their watch as a way to make payments and use public transport, but for now the Pebble Time does relatively little in comparison to some of the competition, but that suits me right down to a tee.