Huawei today reveals it’s latest flagship, the Mate S. After the announcement of the European launch of the Honor 7 last week, from Huawei’s youthful brand Honor, you might be familiar with a lot of the specs – but not all. 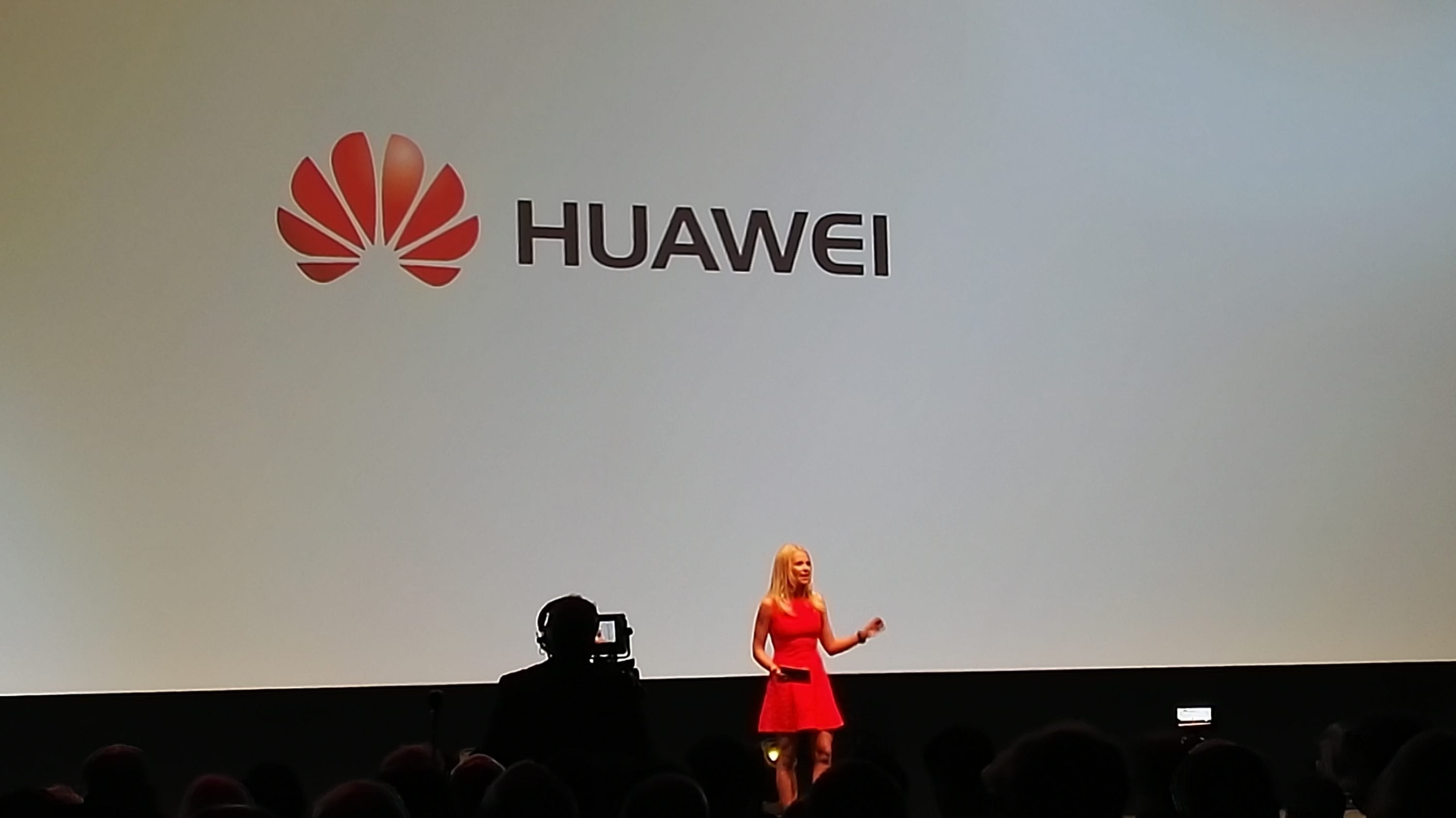 The Huawei Mate S is bigger, with a 5.5-inch Full HD display(1.8M:1 contrast ratio, 401PPI), and an even more stylish high-premium look and feel. Instead of the 20-megapixel camera from the Honor 7, the Mate S retains the 13-megapixel RGBW camera first introduced on the P8.

Like the Honor 7, the Mate S now has a front-facing soft lighting LED (with an 8-megapixel sensor) to improve selfies, as well as new manual controls on the camera itself. 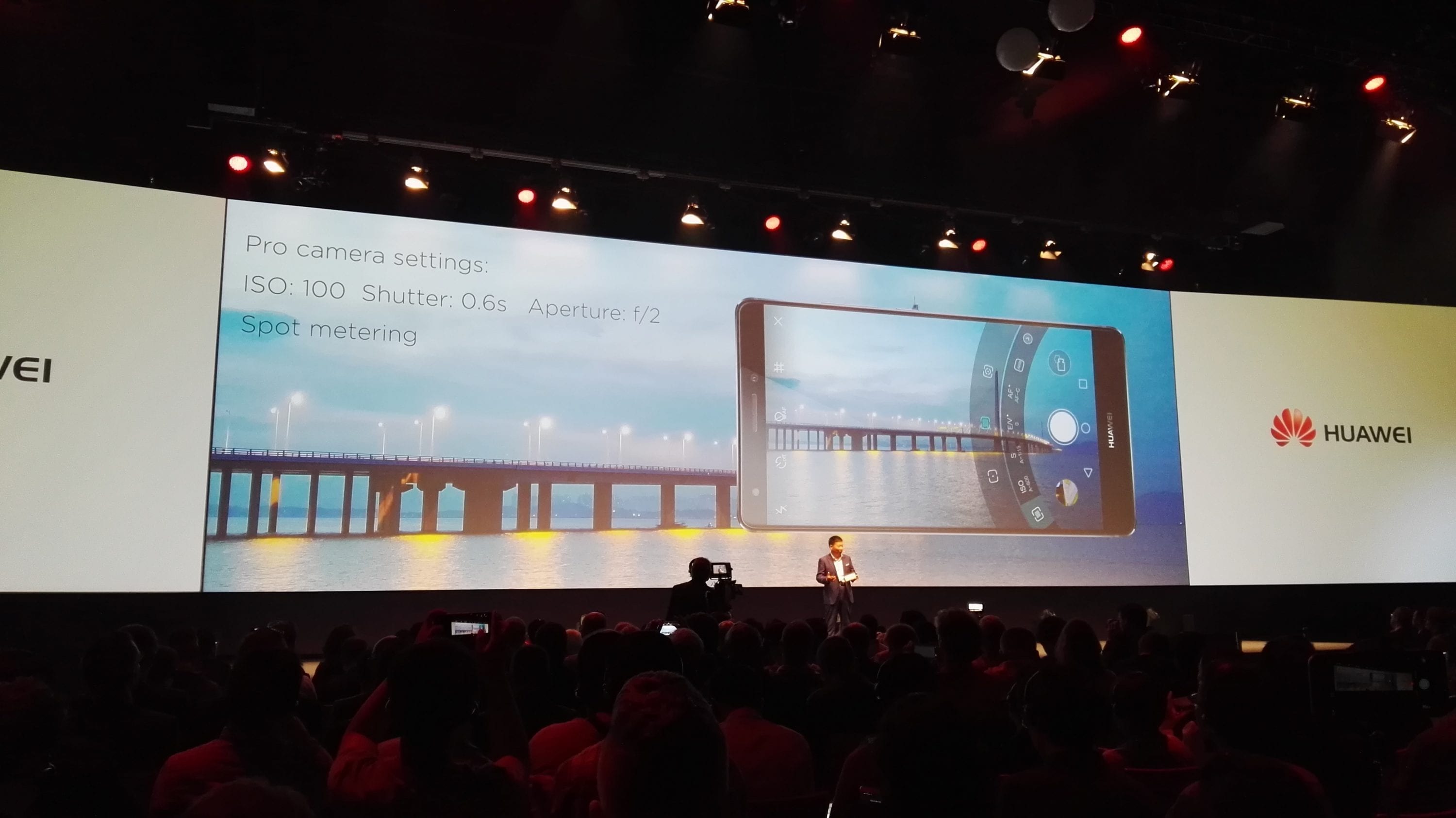 But it’s the addition of Force Touch that will be the big news of the launch, beating Apple at its own game (if only by a week).

The Mate S is the first phone to come with other improved touch controls, like its improved fingerprint sensor, and using Knuckle Sense 2.0, getting new ways to navigate and manage the phone.

Richard Yu, Huawei’s Consumer Business Group CEO for Huawei, took to the stage to announce the new phone with the strapline ‘Touch Made Powerful’.

With a curved back, just 2.65mm at the thinnest point, the Mate S is constructed from metal with 4th generation Gorilla Glass. The integrated antenna on the back is also thinner and colour coded, compared to the iPhone 6 and 6 plus. There’s still only a standard micro USB charging port, however.

The phone also supports dual-SIM 4G, and has a memory card slot for expandability up to 200GB. 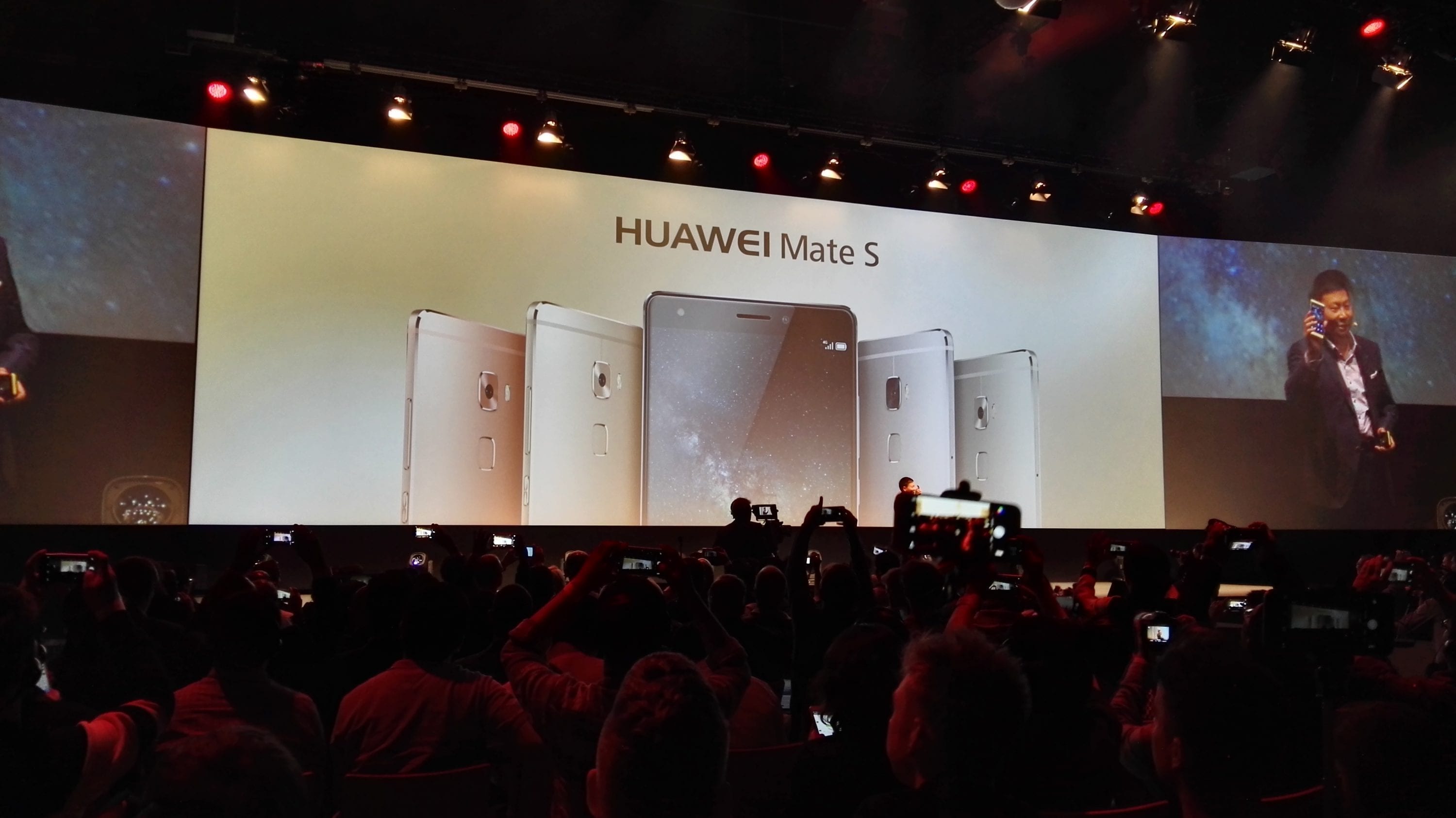 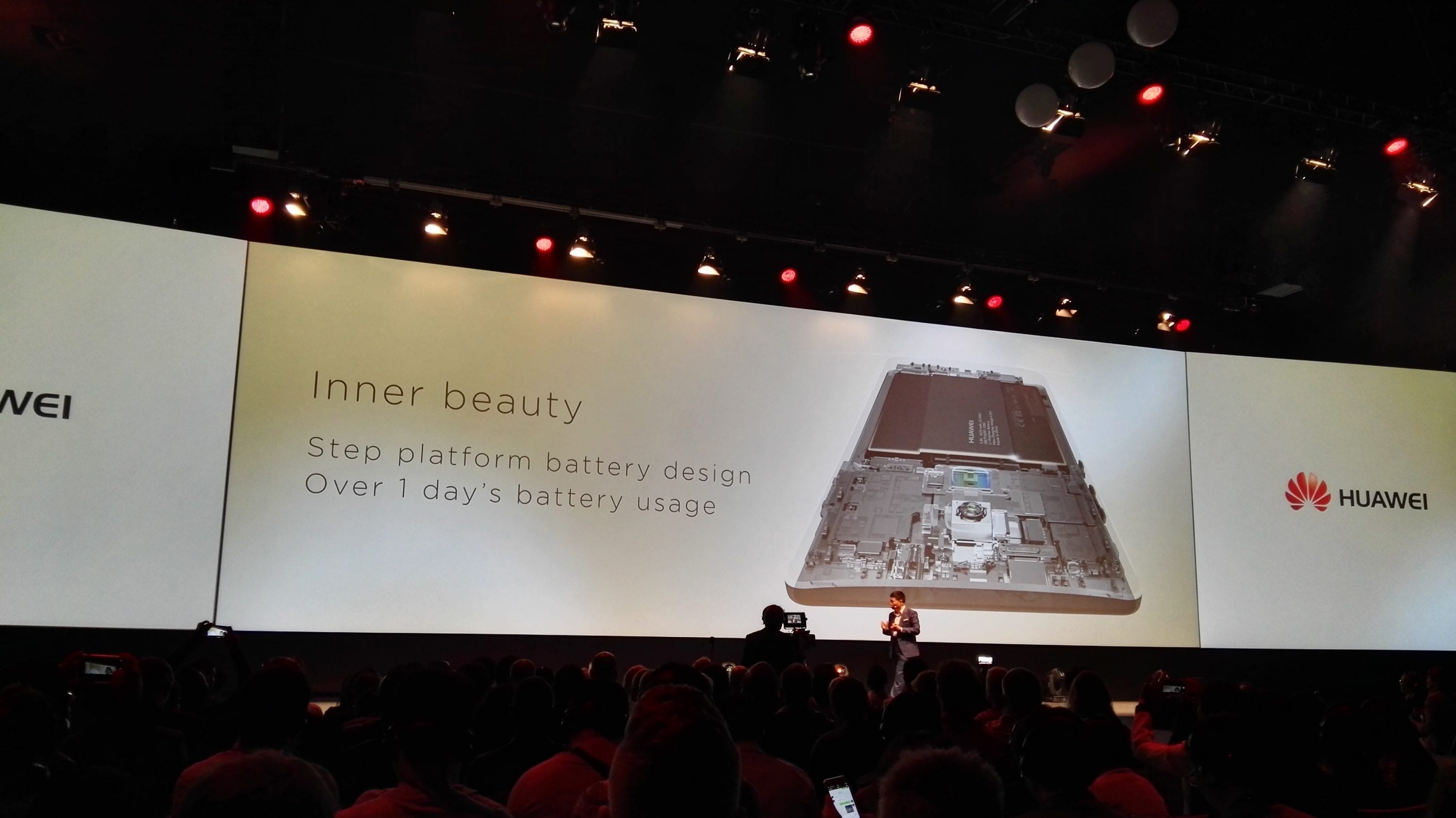 Battery life is also promised as one day. It seems we’ve still got a way to go until we can ever hope to have a premium flagship phone that promises two, three or more days.

Fingerprint Sense 2.0 has increased recognition speed and sensitivity, including the ability to use swipes to navigate control in a single touch (as seen on the Honor 7). 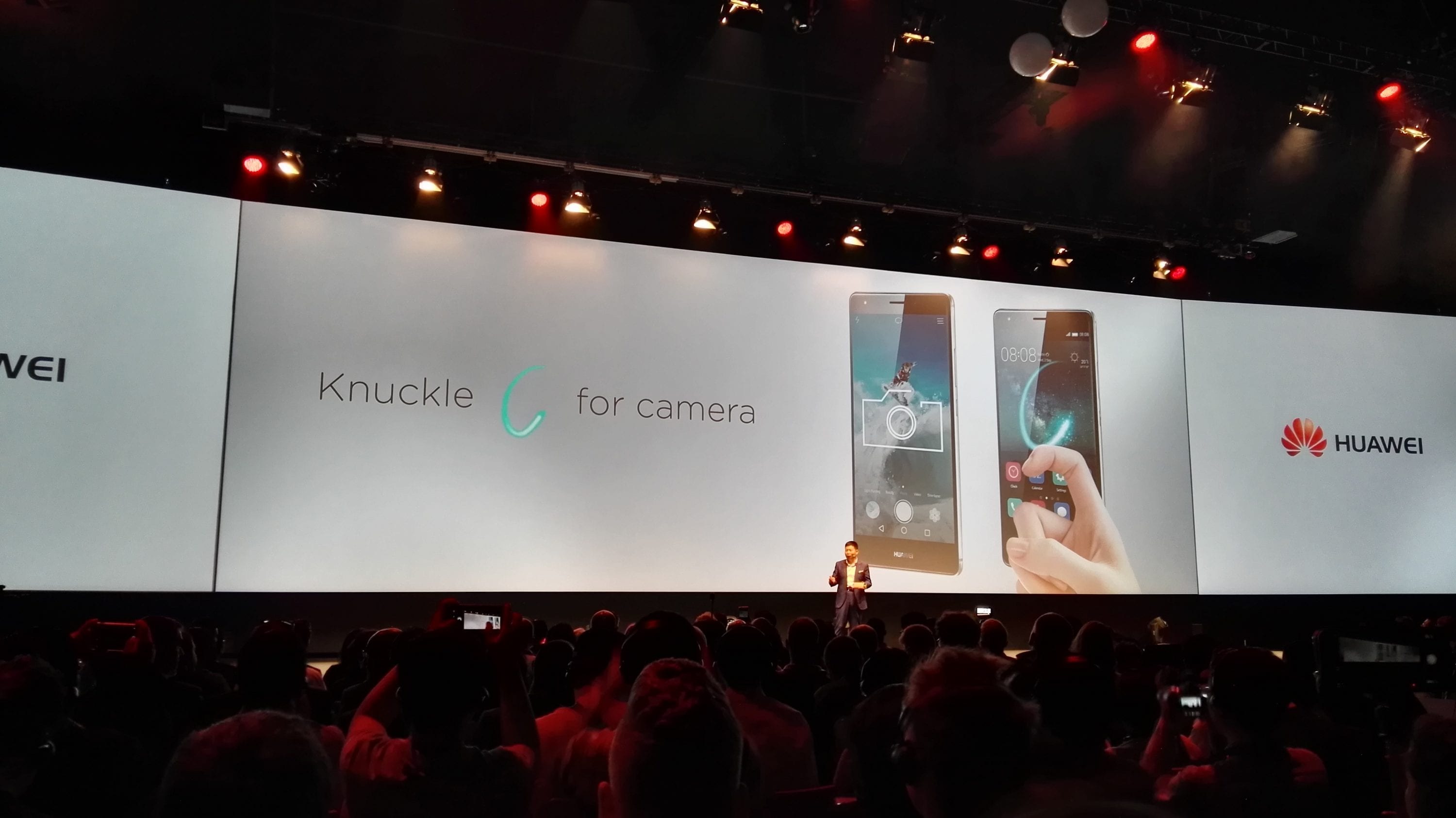 Knuckle Sense 2.0 now improves the ability to grab a screen (or section of the screen) with your knuckle, extended to allow you trace around any image on screen to cut out an image to share. While long page screen capture allows you to capture an entire web page, or scroll down and capture more of an image than fits on the display at once. 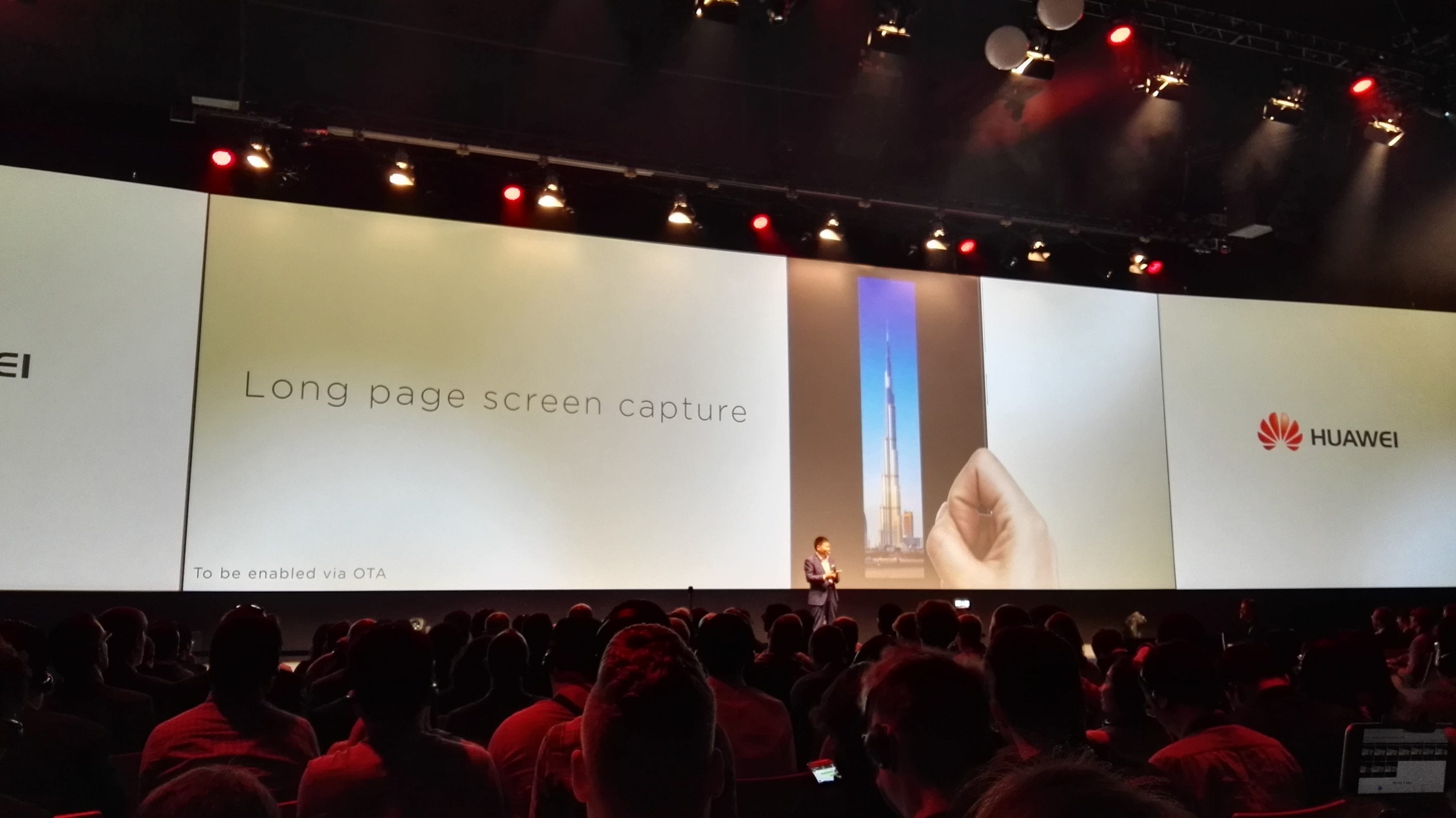 Another feature is the ability to record a section of any video by using two knuckles and a double knock, easily creating a short video clip to share.

Throw in the ability to use knuckles to draw letters to launch apps, and pressing on the edges of the screen to launch apps and the phone is packed with touch features. 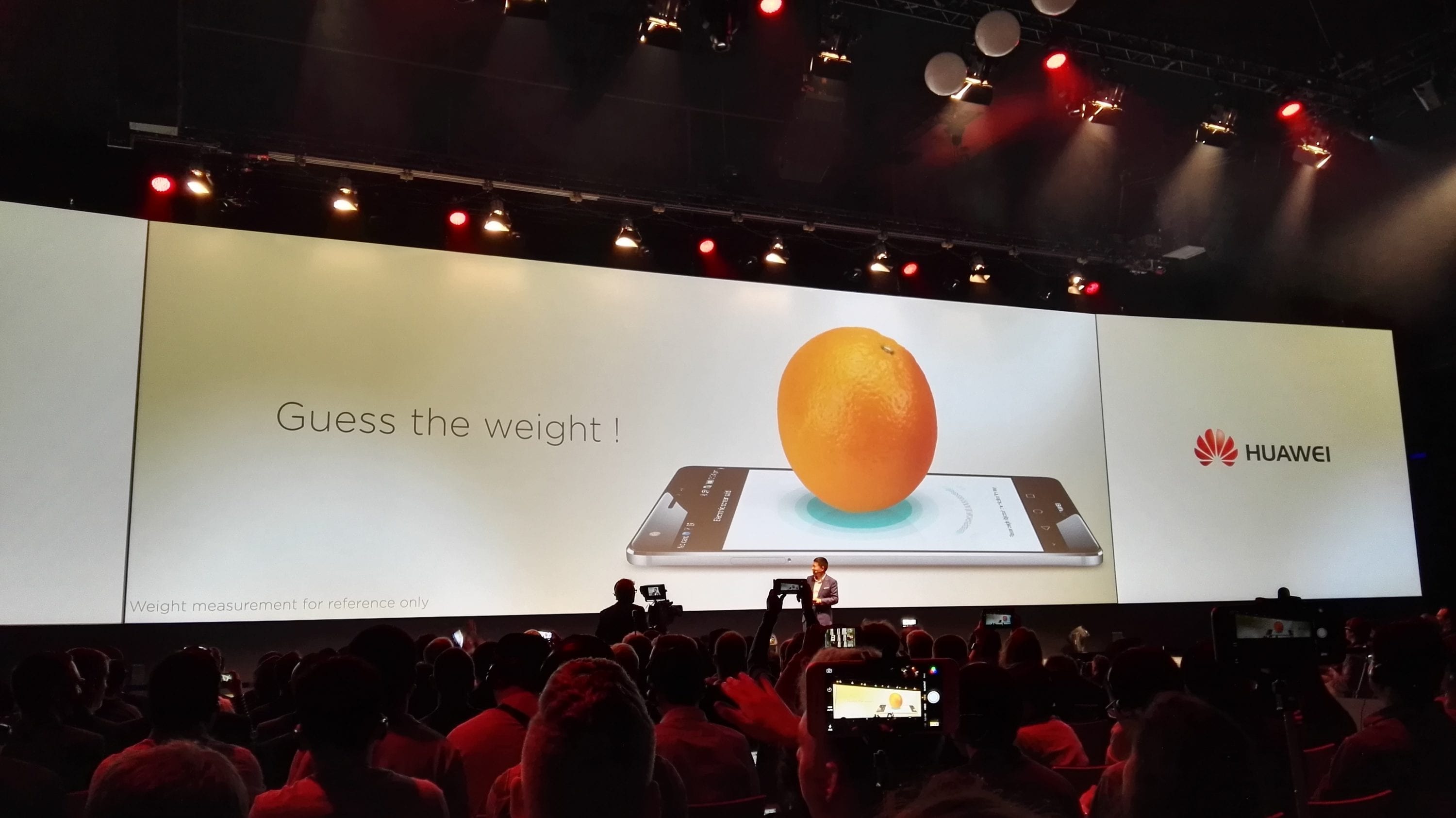 But it’s the Force Touch feature that will be getting all the headlines. Besides beating Apple, the new technology allows you to better manage apps (such as pressing hard to zoom in) and can even weigh small objects placed upon it. Bear in mind it’s only on the top-end 128GB model that will be released later in the year, following 32GB (€649) and 64GB (€699) models.

However, even Huawei hasn’t worked out everything that can be done with the new screen tech, inviting people to submit their own ideas, a bit like the recent decision to invite people to come up with a name for the new Honor wearable. 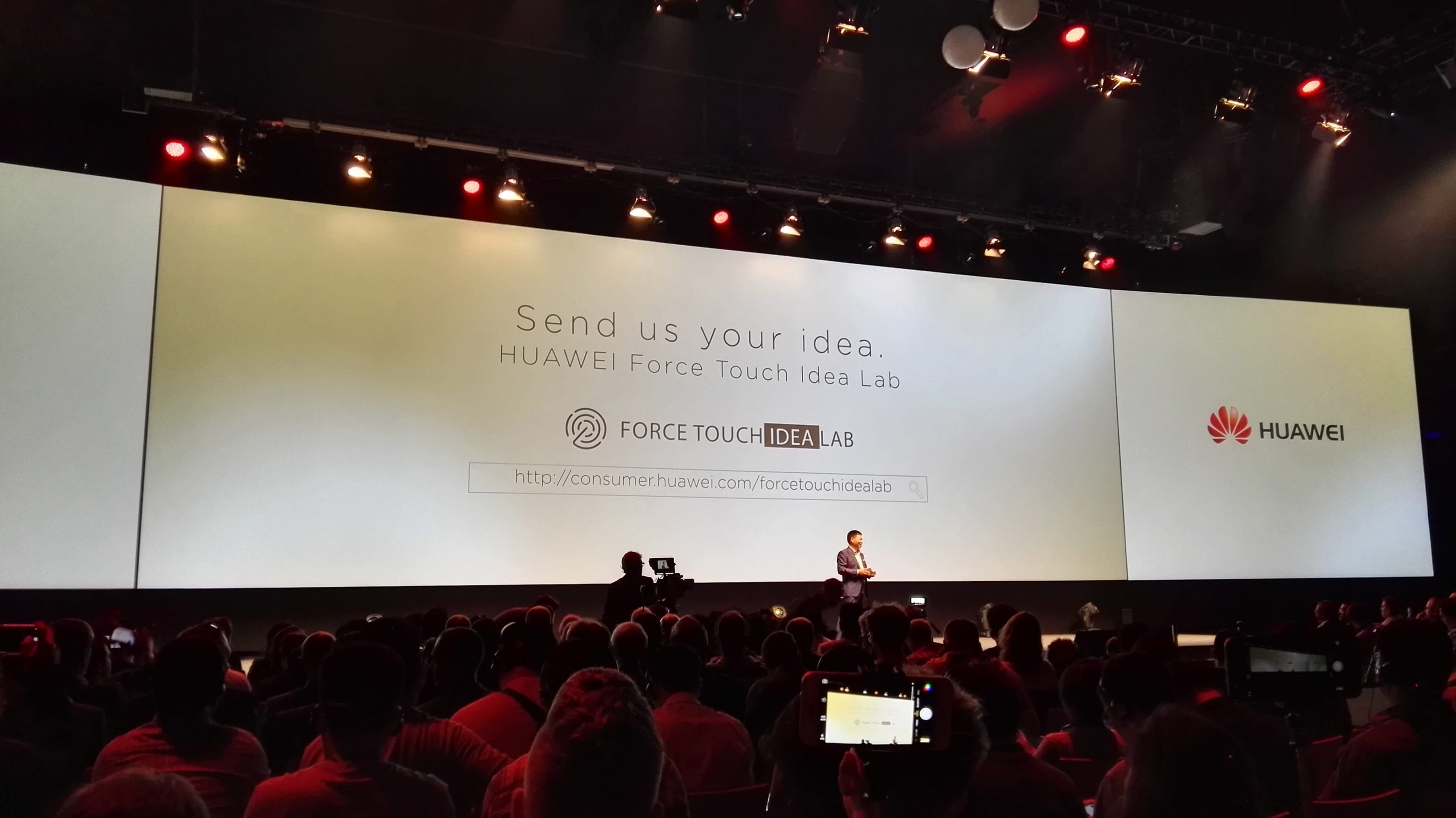 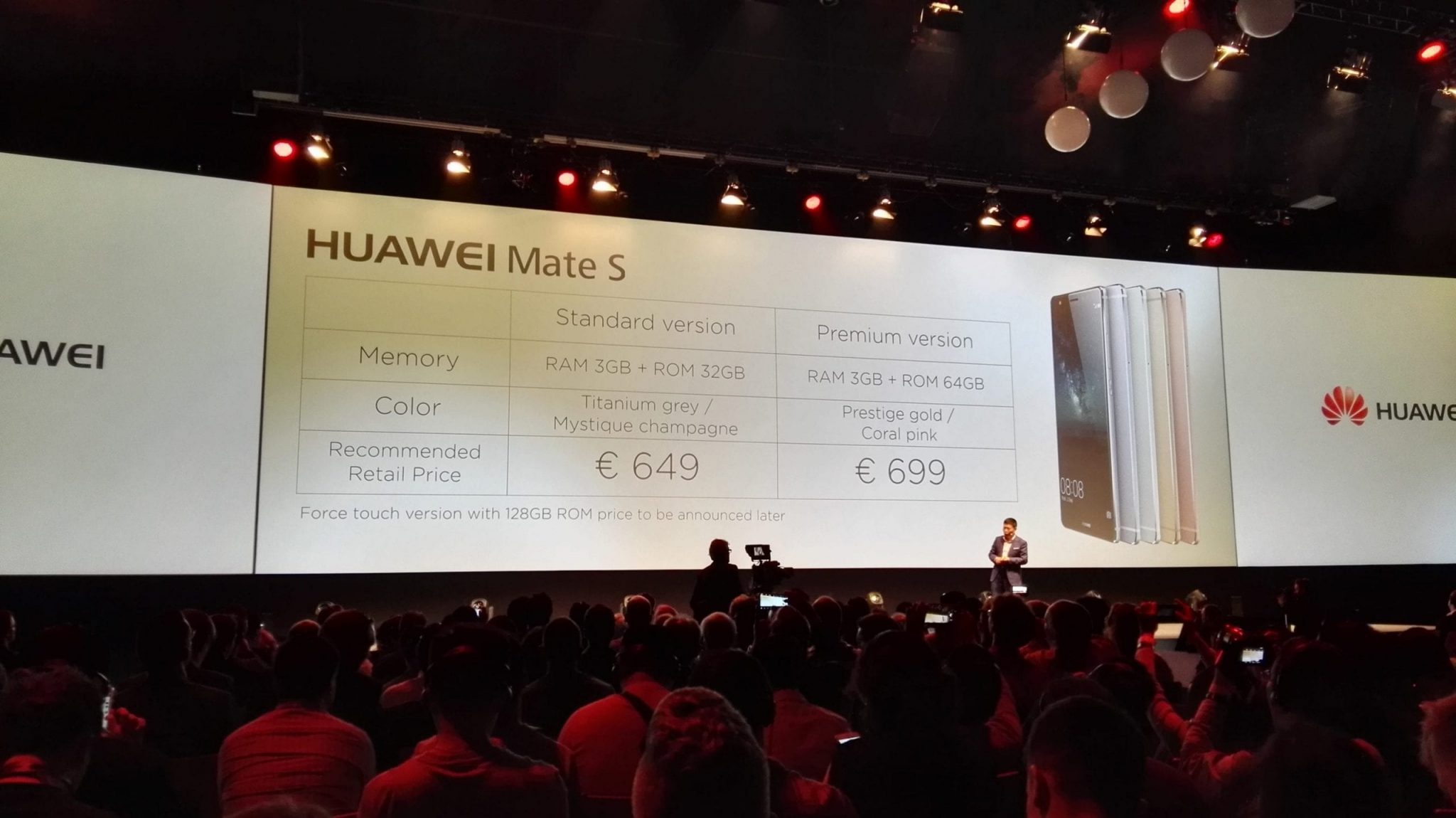 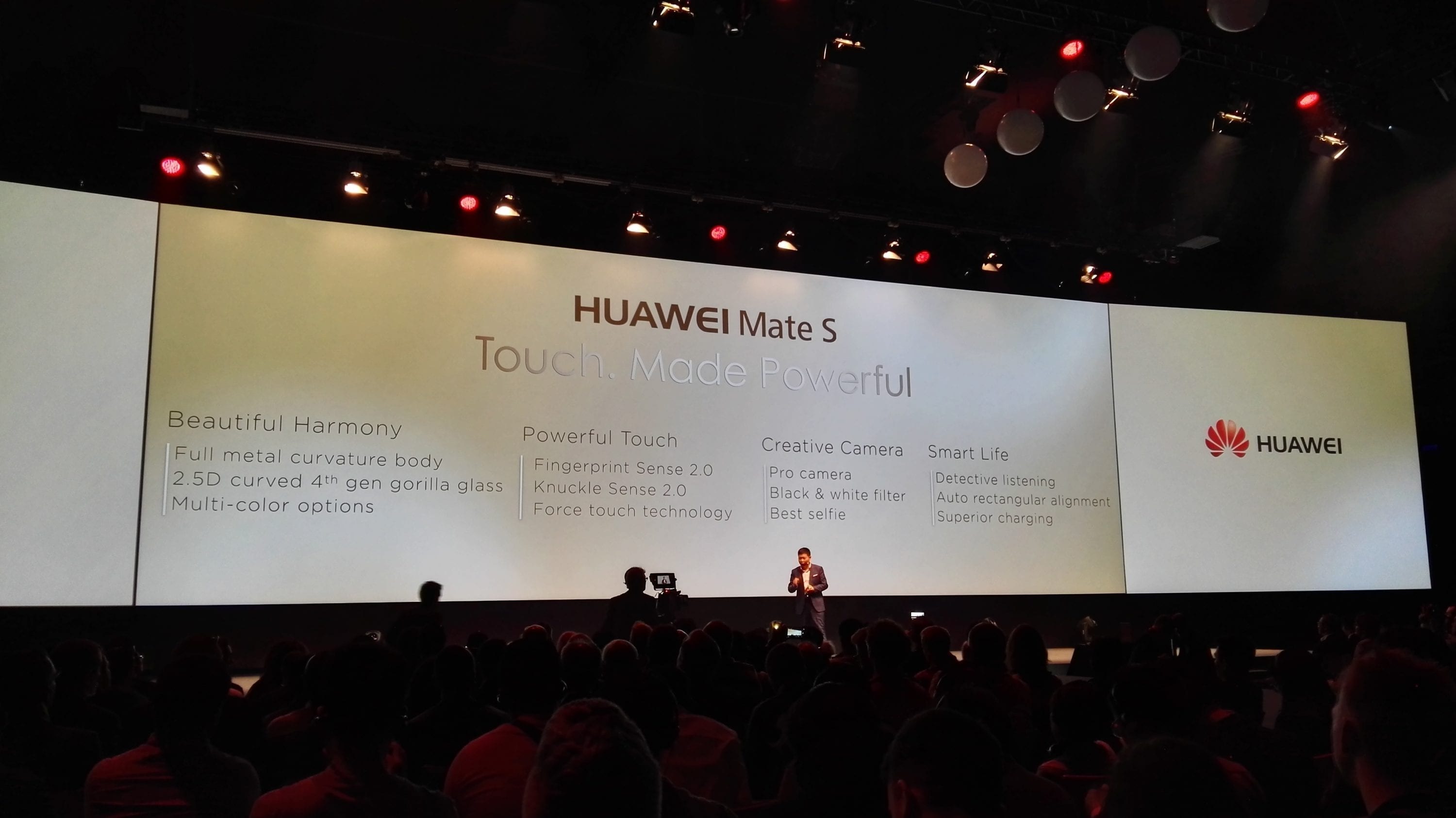 I’ll have a hands-on soon, and even more in the coming days as I’m out in Berlin as a guest of Huawei. All opinions are my own.