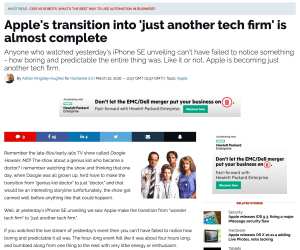 I was going to write a lengthy blog post to match those I’ve written countless times following previous Apple events, but then I saw the following article written by Adrian Kingsley-Hughes and realised that – bar the reference to Doogie Howser, M.D. – it was exactly what I’d have written.

Well, Adrian probably gets the point over in a far snappier, less ranty, fashion but it still matches the thoughts inside my head.

At the end of the day, smartphone and tablet sales are falling (the former slowly, the latter rapidly) and people are mostly happy with what they have today, unless it breaks or gets stolen. Of course, Apple sells globally and there are still many emerging markets, or markets where the larger models are just too expensive.

Offering a smaller-screened model makes sense, and it’s good to see that Apple has vindicated Sony’s decision to make smaller phones that don’t compromise on performance, but I’m not sure the sales will set the world alight for Apple either.

People are gradually getting used to larger screens, and that’s a trend I can’t see anyone stopping.

I suspect the SE is as much about making a more affordable phone than offering a smaller screen. If Apple had reduced the bezel, it could have actually housed a larger sized screen with no footprint increase – but that would have meant spending a lot of money on a new design and materials.