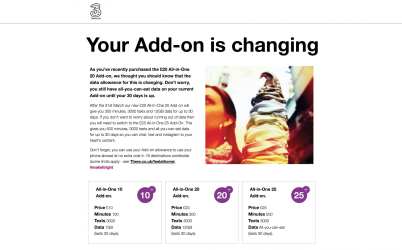 Three’s 321 PAYG plan was an incredible offering for users, and one of its killer features was unlimited data with a simple £15 add-on.

As part of Jackson’s plan to make everything right within Three, the cost of getting all-you-can-eat data increased to £20 last August.

Of course such add-ons for prepay aren’t compulsory purchases, and you are free to choose from the cheaper plans, or simply pay as you go at a rate of 1p per megabyte.

However, if you did regularly buy add-ons to get unlimited data, you’re now going to need to pay £120 more per year than you did last August.

The upside for lower users, is that the £10 plan will go from 500MB to 1GB for the same fee. I guess that allows Three something to promote that’s positive, and perhaps hide the change that will have the bigger impact.

I can’t help but feel that pay monthly users are going to see a similar change in the future, with the plans offering AYCE data likely to rise to a level where anyone wanting ‘peace of mind’ would perhaps be rather mad to pay a fortune for such reassurance.

Since Three introduced 8 and 12GB plans, it has already made it pretty easy for the top plan to go up in price, but still give the network plenty of plans to advertise as offering great value and generous allowances.

Sure, 12GB is still a generous allowance. For many people so is 8GB. Context is important, but it doesn’t totally excuse Three – especially when it continues to promote how much everything else in the industry sucks, as if it can do no wrong.

Nevertheless it’s still sad to see that unlimited data is going to just keep going up in price, because Three doesn’t appear to want to just rid of it altogether – which many would argue is probably a more sensible move.

The problem for Three is that for years it has had unlimited data as a key selling point, and it will want to continue promoting itself as the only network, even if one day you could be asked to pay hundreds more a year.

How much would you stump up to get unlimited data? If Three increases pay monthly costs, would you accept a premium for getting something not available elsewhere? Would you drop down to a fixed allowance, or would you simply shop elsewhere?

Please let me know in the comments below.