After maintaining radio silence on the issue for a while, Wileyfox has begun the process to migrate its users from Cyanogen OS to native Android, with a roll-out of Android 7.1.1 and the latest April security patches. 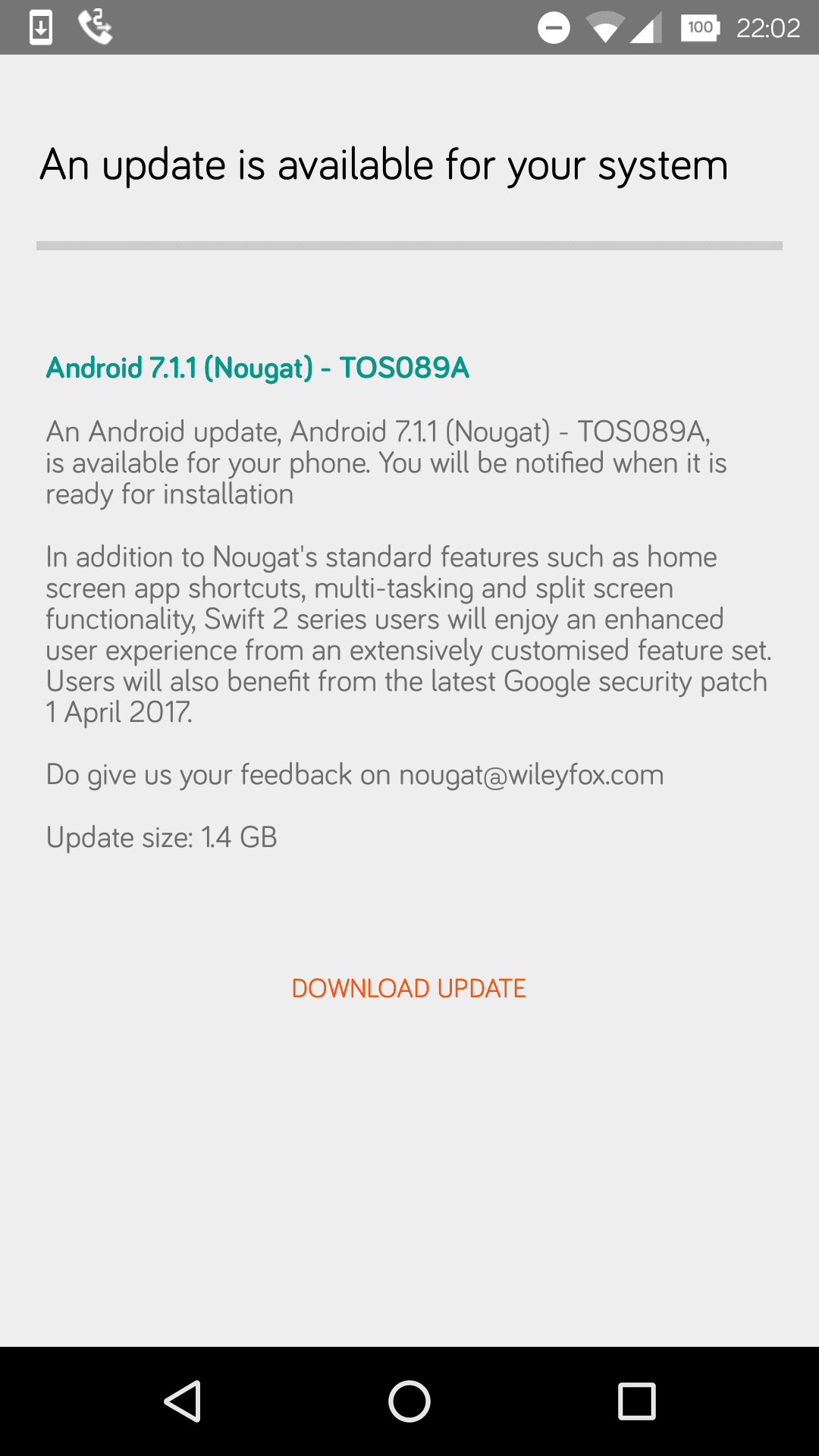 The process begun this week for Swift 2 owners, and will progress on to the Wileyfox Swift (v1) and Storm in May and finally the Spark handsets in June.

Updates will be staggered so people may get an update notification at different times, and if you can’t wait until your phone does its periodic check, go to Settings/About Phone/System Updates and manually activate a check.

If there’s no update showing, be patient and try again later.

The update for my Swift 2X came last night, and was shown as a 1.4GB update. The update process was simple, albeit time-consuming, and left me with a phone that didn’t lose any data or security settings.

Once the update has downloaded and installed, including the completion of the dreaded ‘Android is upgrading’ process (something that should no longer happen for future updates as the process has now been vastly improved to do much of the work in the background), you’ll be left with a phone that could look a fair bit different depending on how you had it set up before.

For example, you will have lost any custom themes and fonts you may have applied, and will need to re-select your default launcher if you previously had any third-party ones installed.

From now on, the standard launcher is ‘FoxHole’ and it seems pretty slick (but also rather basic), even though I still prefer Nova Launcher.

I use Nova Launcher because I can sync the homescreen settings to copy from one device to the next, but having played with the Wileyfox launcher for this post I can honestly say that it’s very easy on the eye, and fast to boot.

The Wileyfox Zen newsfeed service you get from swiping right is a nice addition, although I am not sure how much I’d use it. Plus it does contain ads, which may not meet with universal approval.

Still, it’s not as if there aren’t tens or hundreds of alternatives to choose from if you prefer.

The more things change, the more they stay the same

The native camera app remains, rather than using the basic Google/Android camera app. This offers a range of modes, but is otherwise still pretty basic.

Truecaller also remains as the dialer, which uses crowd-sourced data to tell you more information about callers before you answer, even if it’s a number you don’t have stored in your contacts list.

Other apps like Themes and the audio F/X manager are now gone, plus a load more system settings that once set Cyanogen OS phones apart from ‘normal’ Android-powered phones.

Being able to adjust power management settings from a range of profiles (or an app-by-app basis) is no longer possible. All you get, besides Android Doze operating in the background, is the battery saver that only kicks in below 15% charge.

Time will tell if native Android power management is better than what was offered before.

One feature from before was the ability to play around with the look of the status bar, including turning on and off icons, moving the clock and much more. There was a lot more choice than the more limited selections on the System UI menu option on Android.

That menu shows here in Settings/Personal/Status Bar, rather than normally being hidden and activated with a long-hold of the settings icon when pulling down the notification bar.

Here you can turn off selected icons for activated services (e.g. hotspot or flight mode icons), show a percentage inside the battery icon at all times or only when charging, and toggle the display of seconds on the clock. It’s not as advanced, but it does the job – and I’ve always liked being able to display seconds on the clock.

Elsewhere on the phone you can also adjust the notification light settings, including brightness and colours for each notification.

Being able to adjust the screen brightness by dragging left and right on the status bar is one rather unique carry-over. The night mode from Cyanogen is now replaced with the native Android Night Light feature.

All in all, users don’t really lose anything important that they had before, and what is lost in extra functionality is gained in having a phone that now has all the extra features of Nougat, plus an incredibly quick user experience that seemed just as nimble as any phone running on a considerably more powerful chipset.

All things considered, Wileyfox has done a great job and should be commended for having a roadmap that will get EVERY user upgraded, even those with the very first phones from almost two years ago.

Sure, Wileyfox didn’t quite make the end of Q1 deadline, and it did go very quiet for a while (to the point that some rumours were starting to spread that suggested the updates might not happen), but the process has now begun and all users should be very happy with their phone once it gets the update.

Wileyfox vs The competition

You can find out more about Cyanogen and what it offered over and above the usual Android experience in my comparison with the Moto G, written back in 2015.

Even today, obvious comparisons will be made with the Moto G and other similarly priced phones, but now the ‘hook’ of Cyanogen OS on the Wileyfox models is history and it isn’t coming back. Ever.

LineageOS is the successor to Cyanogen and over at Xda-developers.com, you can already find out how to get this on some Wileyfox models. Of course, that’s a totally unofficial route and has many possible hazards to be aware of. Not something for the average user, who will prefer to stick with Over-the-Air updates from the manufacturer itself. 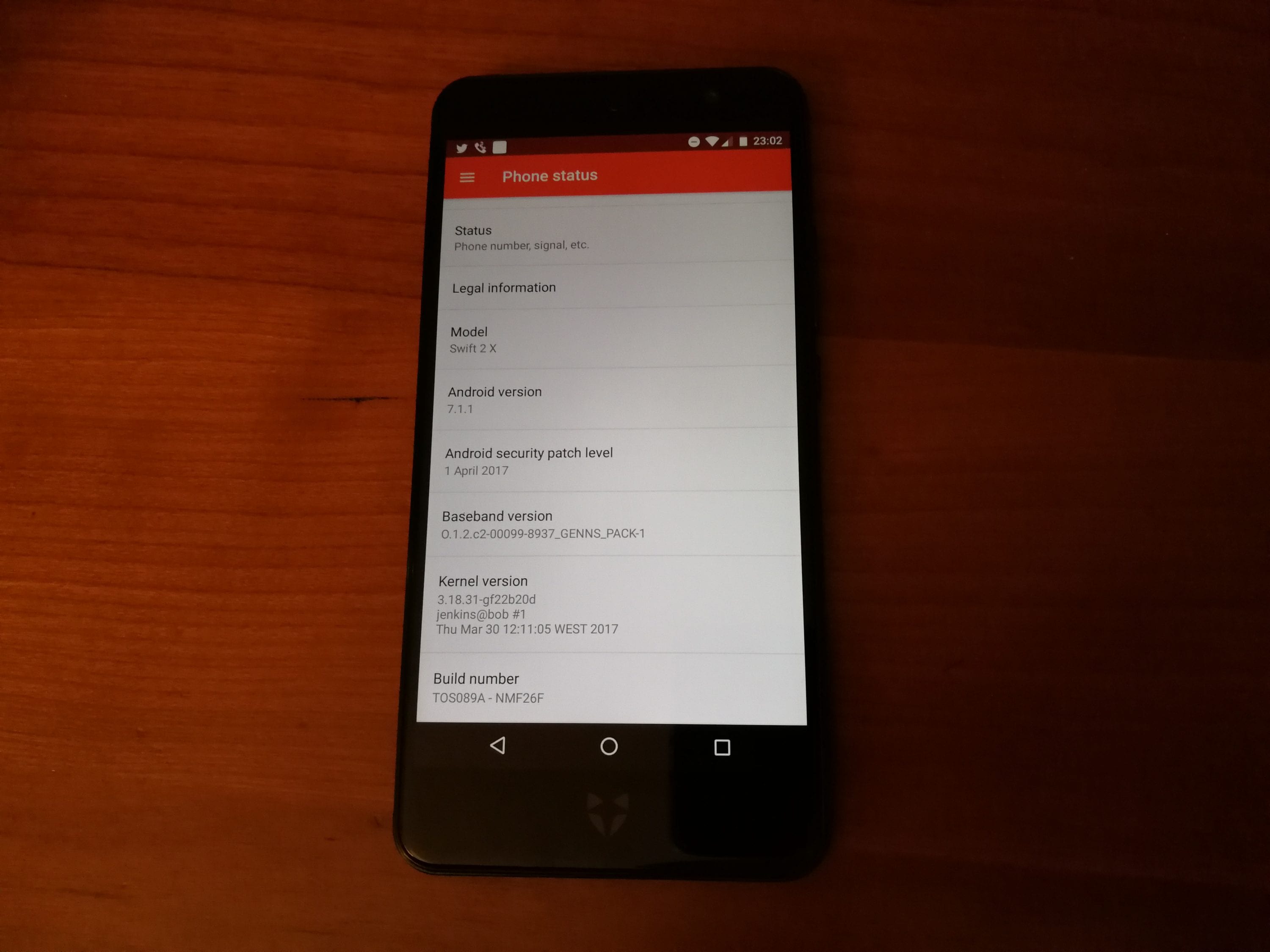 Time will tell if the changes impact on the desirability of Wileyfox as a brand, now the phones are pretty much like any other. Cyanogen was a great differentiator and often helped ‘seal the deal’ when people were making comparisons.

I also expect a lot of people won’t care, especially anyone that buys one now and never experienced Cyanogen OS, and this must be what Wileyfox is praying for too.

Let’s remember that Wileyfox didn’t ask for any of this to happen, and it has clearly been working very hard to make things right for customers.

That in itself should serve as a benefit to take into account in the future when choosing a phone. Which company gives the best ongoing support? By the looks of where we are today, it seems Wileyfox has proven itself as a company that cares.

Now with a near-vanilla Android experience that will hopefully come with timely updates, it won’t be long for discussions to move on to when Android O will come, at least to the more recent models…

14 thoughts on “Wileyfox begins Nougat rollout to ALL customers: Find out what has changed”