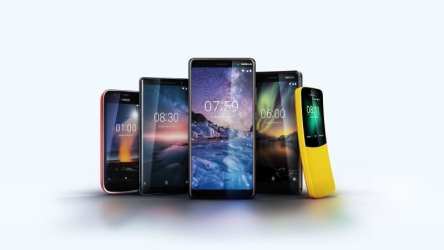 Nokia has had a good 12 months, having shipped 70 million phones since it last attended Barcelona to relaunch the brand as a maker of mobile phones (and more notably, Android mobile phones for the most part).

Starting off a nice and quick press event with no pointless demos and waffling on about design features, the pre-MWC launch event started in much the same way as Nokia’s event a year ago, which got all the media attention for the relaunch of the classic Nokia 3310.

This time it was the turn of the….

…to be relaunched for the modern era.

The Nokia 8110 has been known by many as the banana phone, or the Matrix phone, and now it’s back as a 4G phone with apps and a colour display. But it does still look quite a lot like the original.

The reimagined, rebooted 8110 comes not only with 4G and VoLTE (voice over 4G) so it can access sites that many other phones may not, but it can also be used as a portable hotspot, although the relatively tiny battery (1500mAh) might put paid to plans to replace a ‘proper’ hotspot with one of these.

That said, for occasional use to get a laptop or tablet online when on the move is still a valuable feature and gives it some added value and benefit.

The slide isn’t a gimmick either, as it can be used to answer and hangup calls. There’s no spring-loaded action as in the Matrix (and for those that don’t remember, in the film the phone was a hybrid of the Nokia 8110 and the 7110, the newer phone that had ‘Mobile Internet’ in the form of WAP – but here endeth the history lesson).

Although not a true smartphone, the 8110 reboot has most popular apps, and it now comes with the option of a yellow case that the original never did.

At €79 it’s not going to break the bank, so I suspect a lot of people may still buy this for the nostalgia value even if they rarely use it. Although at least, unlike the 3310, there are more reasons to use it this time around.

One wonders if 2019 will see Nokia re-releasing another classic phone from its archives.

The Nokia 1 is Nokia’s entry level phone, which comes with a modified version of Android Oreo to work well with a far lower specification (1GB RAM and just 8GB storage, albeit with memory expandability), and it retails at just €89 (sort of makes you wonder about the 8110 above).

It also comes with Xpress-on covers to totally personalise the phone, which is definitely a plus, 4G connectivity, dual-SIM, and a 2150mAh battery.

Timely updates for all

It was here that Nokia also told us that it will promise timely updates for all of its devices going forward, under the Android One programme, making a few digs at manufacturers that have only just begun to roll out Android Oreo for some of its flagship devices.

The Nokia 6 is back with a new update for 2018. Machined from a single block of aluminium, it now has support for bothies, Carl Zeiss optics and face unlocking.

A sculpted 2.5D, 5.5-inch full HD, display with Gorilla glass helps Nokia claim it has made a phone durable enough to survive the perils of daily life.

The Snapdragon 630 powered device also gets wireless charging (and a 3000mAh battery) and will retail for €279.

The Nokia 7 also gets a new addition, but this time selling alongside the existing model. This time it’s the Nokia 7 plus, at €399, with a large 6-inch FHD+ 18:9 ratio screen, Snapdragon 660 SoC, 4GB of RAM, six layers of paint and two days battery life.

The Nokia 7 plus also gets Zeiss optics, including a twin camera with standard (12-megapixel) and telephoto (13-megapixel), plus a pro camera mode (that is also available to all other phones with Zeiss optic phones).

There are also AI features to make Snapchat style animations with your selfies and more.

Finally there’s the flagship, coming in at a €749 price point. The Nokia 8 Sirocco, previously expected to be called the Nokia 9.

Machined from stainless steel, the Nokia 8 Sirocco is extremely strong – although also prone to fingerprints like crazy. In the demo room, the phone trainers were stocked up with wipes to remove any marks that inevitably appeared almost by simply breathing in the vicinity of the phone.

But with its superslim design (7.5mm at the thickest point, and around 2mm at the thinnest points at the edges), the phone definitely stands out.

The edge-design screen is also reminiscent of a Samsung phone of late, while Snapdragon 835, 6GB of RAM and 128GB of storage definitely keeps it in the premium category for more than just its looks.

There’s IP67 water resistance and wireless charging, and if Nokia keeps its word on offering quick software updates then it might be a worthy phone for considering if looking for other phones in the £700-900 price range.