I was once blown away by the incredible speed of ADSL. Now it’s like watching paint dry. Thankfully there may now be a realistic alternative for those who aren’t lucky enough to have fibre or cable alternatives.

It’s pretty obvious why ADSL no longer cuts the mustard. The need for faster data has accelerated rapidly in recent years, with more and more of our data stored in the cloud, while ultra high-definition video requires faster speeds than ADSL can deliver even if living next to your exchange.

For almost 15 years I’ve been struggling along with a 6 megabit connection, with various issues meaning I have the rather unenviable claim-to-fame for being served from the only cabinet in town not to have been given a fibre upgrade.

Almost six years on from the original predicted ‘go live’ date, I am still waiting.

Mobile broadband has always been an alternative for me, but for the most part it has been a lack of hardware or decent sized data plans that meant I’ve been stuck with keeping ADSL, and occasionally using a portable hotspot, or phone as a hotspot, to get online when needs must.

But now EE has relaunched its home broadband service, with a home router and the added benefit of a professionally fitted external antenna (at extra cost), which gives the best possible chance of a good upload and download speed – in addition to data plans that now run up to 200GB per month.

UPDATE: Read about the speed gains by using a Huawei B618 LTE router!

It’s not so much the router but the antenna that makes EE’s new offering such a game changer.

It finally allows the router to be placed in a more suitable location, rather than the more likely scenario of putting it on a windowsill on whatever side of the property with the best signal. A rather dodgy location given the very real risk of harm on hot, sunny days.

Obviously 4G antennas have been available to buy just as long as routers, and there are various installers that will come and do a professional job without having to sign up to an EE plan, but EE is offering the antenna and fitting for a fixed £99 fee, with the additional promise of a full refund (less £10) if it doesn’t live up to expectations.

You would be hard pushed to get an antenna for that money, let alone find someone willing to fit it. And good luck trying to get your money back if it doesn’t work out. 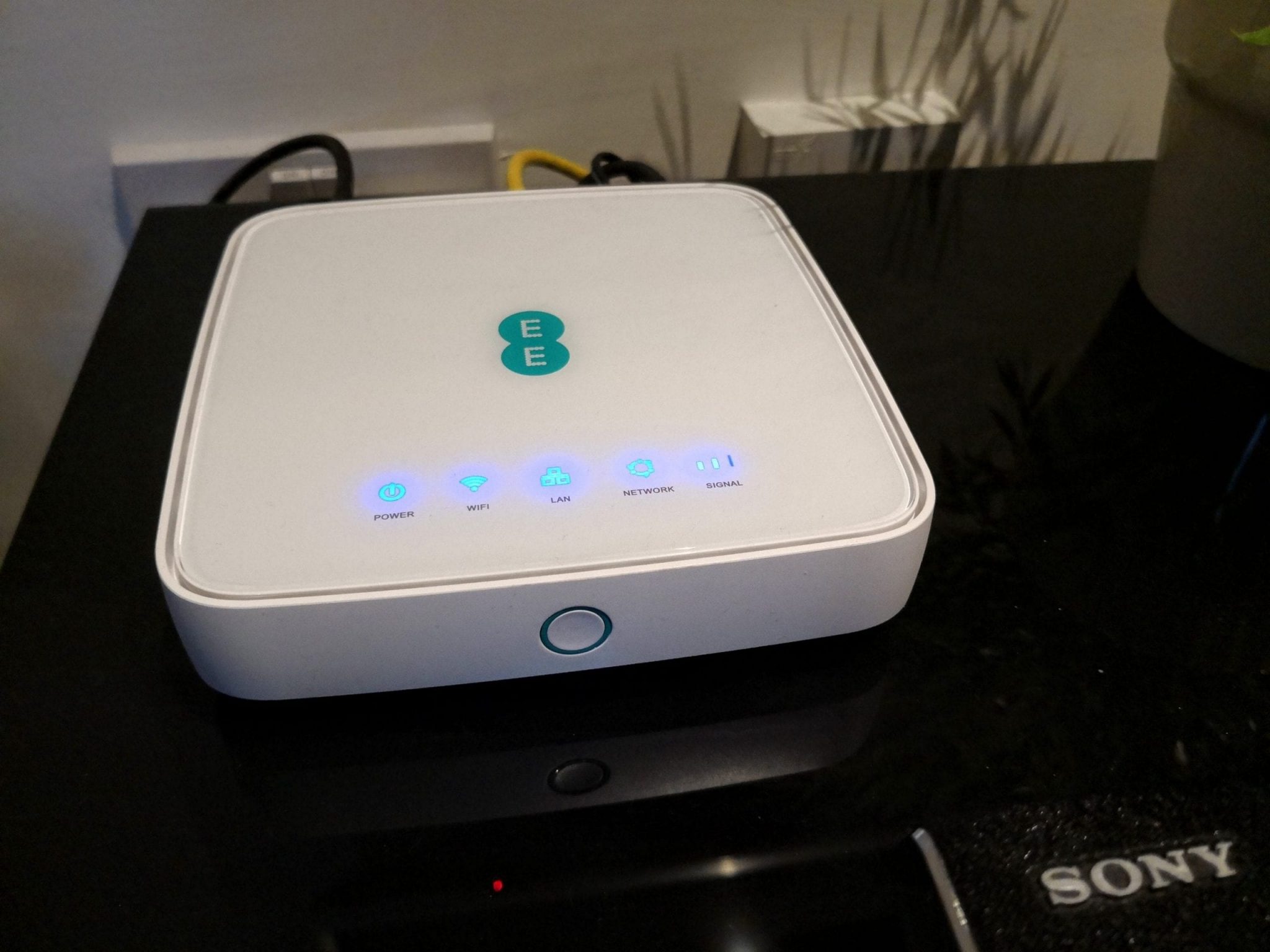 The Alcatel made router is not going to win awards when put up against the huge choice of routers on sale with incredible speeds and incredible prices to match.

It’s a rather humble affair with two LAN ports, a USB port, two external antenna ports (for the 4G antenna) and a bunch of lights on the top to show your 4G signal and other status icons. On the side is a nano SIM tray, as well as a power button on the front. There’s a WPS button too, to allow fast and secure connection of wireless devices.

The router supports dual-band Wi-Fi with 802.11ac, but the antennas are internal so won’t likely perform as well as some of the more sophisticated routers on sale. That said, placed alongside my existing Asus ADSL router, the performance at the other end of my house (and it should be noted that it’s a modern new build home, so hardly huge) was not noticeably different.

2.4GHz Wi-Fi will of course carry itself further, but you’ll then be at risk of reducing throughput if you’re lucky enough to get a very fast 4G connection.

EE sells a portable hotspot (the Netgear Nighthawk M1) with Gigabit LTE support. Unfortunately it’s not available on the home broadband plans, and while it has a single LAN port and can be run on mains power (plus it also has external antenna connections), it isn’t designed to cope with the demands of many devices connected at once.

When I talk about 4G speed on a handset, I’m often told that speed isn’t that important on a phone. Excluding the fact you might wish to tether, it is certainly true that speeds in excess of 100 or 200Mbps are probably somewhat overkill.

Once you’re using it as your home broadband and streaming a 4K film on Netflix, while the kids are gaming or watching YouTube, and your computer is backing up files in the background, that speed becomes all the more important.

When you call up to place the order for the antenna install, you will undergo an initial remote survey to based on your install location. EE will do a search of nearby sites to establish which one the antenna should be pointed at, because the antenna will be a directional one, requiring proper alignment much like a TV aerial or satellite dish. 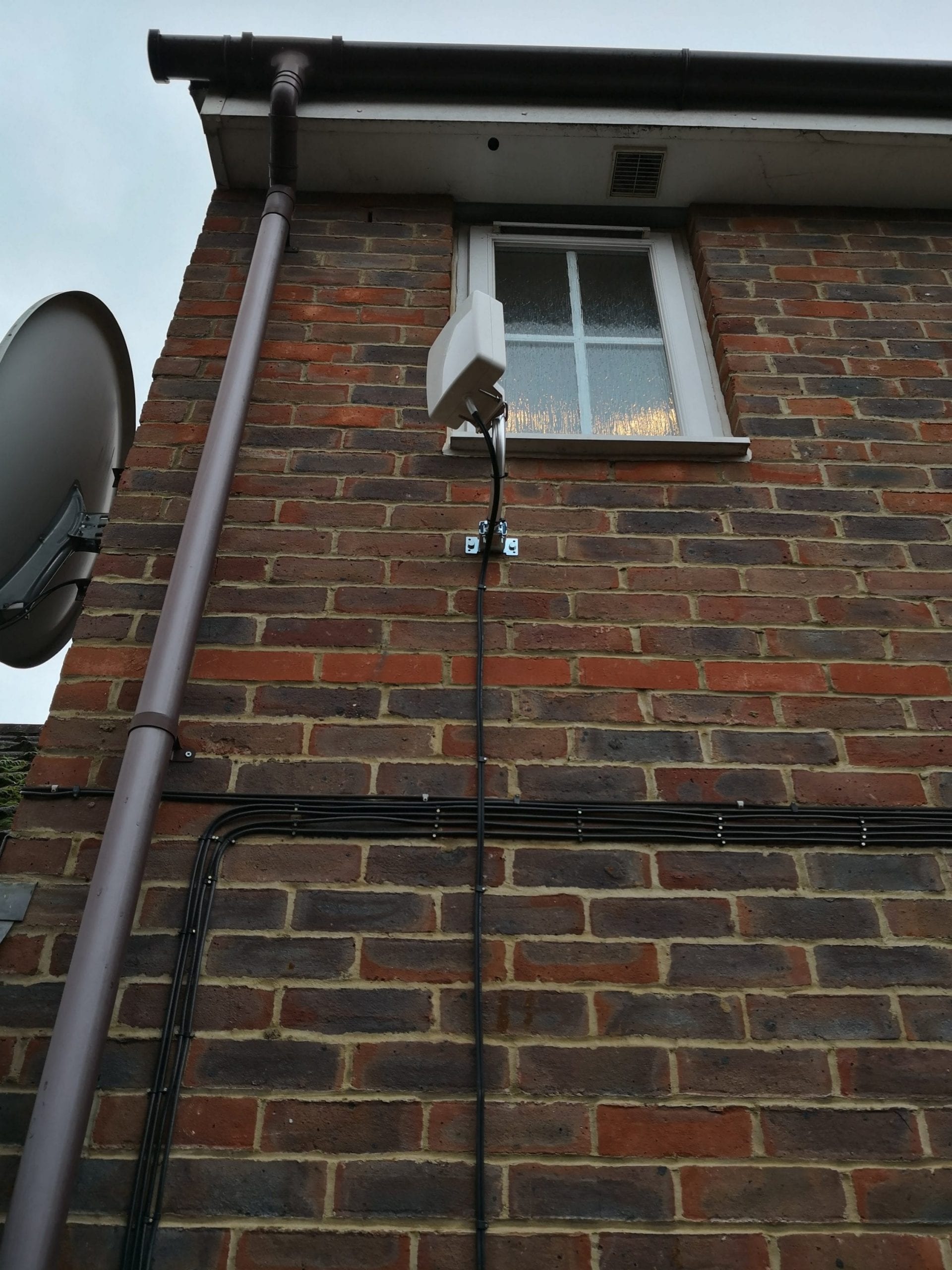 After making the initial booking, a local engineer will be appointed and you will be asked to make payment and agree a date. This should take around a week or so in most cases, but in my case I actually requested a later install date because of my trip to Barcelona for Mobile World Congress.

On the morning of my booked install, I was called by the engineer to give an estimated time of arrival, and when he arrived another survey was done to establish the best position on the house.

It was here that it became apparent that various multipath issues (caused by a large number of buildings in the way from my favoured site, on the roof of EE’s original HQ no less) could pose some problems. I was warned that I might not see as big a gain as I hoped, which is where the ability to get a refund will come into its own.

When you order you will be told of a limitation of just five metres of cabling, although if you need more then there’s the option of a three metre extension. However that is frowned upon because, as I was told by the installer, there’s quite a large chance that this will mean a substantial signal drop through the cable itself once longer cables are used (as well as the loss from connecting the two cables together and weatherproofing them).

As such, EE recommends the five metre limit, and it is not advisable to go against that advice or else you may find the antenna won’t be anywhere near as effective as it could be.

Fitting the antenna and cabling was a quick and simple process, and the whole job was done professionally with a night straight cable drop (with clips at regular spaces!). He fitted a box on the wall inside for the cable to come through, so as not to just be two untidy wires poking through the wall. If only Sky installers paid as much attention to detail.

Before the fitting of the antenna, my router was put on a windowsill to do an initial test. I was able to get download speed of between 70-100Mbps, depending on the time of day, with ping times averaging 25ms.

Downstairs in the living room, where I wanted the router to be installed, without the antenna, it dropped to around 10-12Mbps, with ping times averaging 150ms. Upload speeds were down from around 20Mbps to less than my 0.75Mbps ADSL connection!

This is why the antenna installation is so important.

After the antenna was fitted, the router was placed back in the living room and both myself and the engineer performed speed tests to see what improvement, if any, there was.

EE requires data on the before and after speeds, presumably for their own records and to see if their predicted ‘uplift’ in performance suggested during the initial telephone survey has proved accurate.

My result wasn’t quite the uplift I was hoping for, but it was still faster than anything I had before, with speeds now ranging from 80-120Mbps (again, varying depending on the time of day) for downloading, and around 10-11Mbps for uploading.

The uplink speed has actually taken a little hit, which is a bit of a disappointment, but overall I am still happy to now have a significantly faster connection with none of the usual ADSL sync issues that I have come to live with over the years, with at least one or two dropped connections per day.

EE’s own website predicted ‘up to 90Mbps’ for my address, so I can’t be unhappy with what I’m getting, although I do feel there is more to gain by having a better router, and hope more choices are made available soon.

The antenna won’t need to be changed, although there’s a chance there may need to be adapters used depending on the connectors used on future routers.

For now, I am extremely happy to have seen a huge increase on my current ADSL service, as well as having the router in the living room so I can get the best indoor Wi-Fi signal for all the devices I want hooked up. Meanwhile, the TV can be connected via Ethernet for 4K video streaming.

I have also been able to connect it a powerline adapter to hook up a computer at the other end of the house, but despite the TP-Link app showing a link speed of around 150-180Mbps (AV600 adapters) between the router and the computer, the throughput is massively impacted and rarely reaches even 30Mbps. So wireless it is then.

The only real problem from all of this is that 200GB is not necessarily going to be enough data for a lot of people. I’m not sure it will be enough for me either, but there is no higher data plan currently.

Run on charges are quite high too (EE hard caps your allowance so you must pay for more data up front) and if you need a lot more data, it actually works out far cheaper to get a second contract on a 100 or 200GB plan. That’s rather bizarre.

Comparing the cost against having a landline and broadband package, £60 a month for the 200GB plan  isn’t quite as expensive as it first sounds (with a 10% discount if you have another EE plan).

Perhaps letting you carry over unused data (no household can plan to use the exact amount every month), or even throttling the speed instead of cutting you off should be things EE considers for the future.

2018 is going to be the year where competition for mobile broadband in the home (or office) intensifies, with Three offering its own service (but as far as I can see, with no offer of a professional install) and Vodafone and O2 hopefully entering the ring too.

It already seems demand is exceeding expectations with the installer telling me he has had nearly ten times the number of installs that EE predicted he would be getting.

Given I am clearly not the only person forgotten about by the traditional broadband providers, I think EE has lucked out here – but to make the offering better still, those plans need looking at – and hopefully an even better router isn’t far away.

Disclosure: I bought my own 4GEE Home Router on a 200GB data plan (£60 per month, on a 30 day rolling contract) but EE offered to install my antenna free of charge. All opinions are my own.