Two days, two phone launches. Yesterday was the turn of Honor with the Honor 10, and today it was down to OnePlus to use London’s Copper Box Arena to unveil the new OnePlus 6.

The event was kept quite simple, with two launches. First up was the first wireless audio product from OnePlus, the Bullets Wireless headphones – using a clever combination of USB-C fast charging support (10 minutes charge for 5 hours music playback) and magnetism to automatically turn the headphones on simply by detaching the two earpieces.

Connect them together when you take them off and, bam, they’re off.

OnePlus co-founder Carl Pei said they waited until they got things right, but it wasn’t just the hardware they got right. With a £69 retail price, it means they’re certain to prove popular.

But everyone in the room, or watching at home or work, was likely more interested in the OnePlus 6. After all, that was what everyone was at the event to hear about. 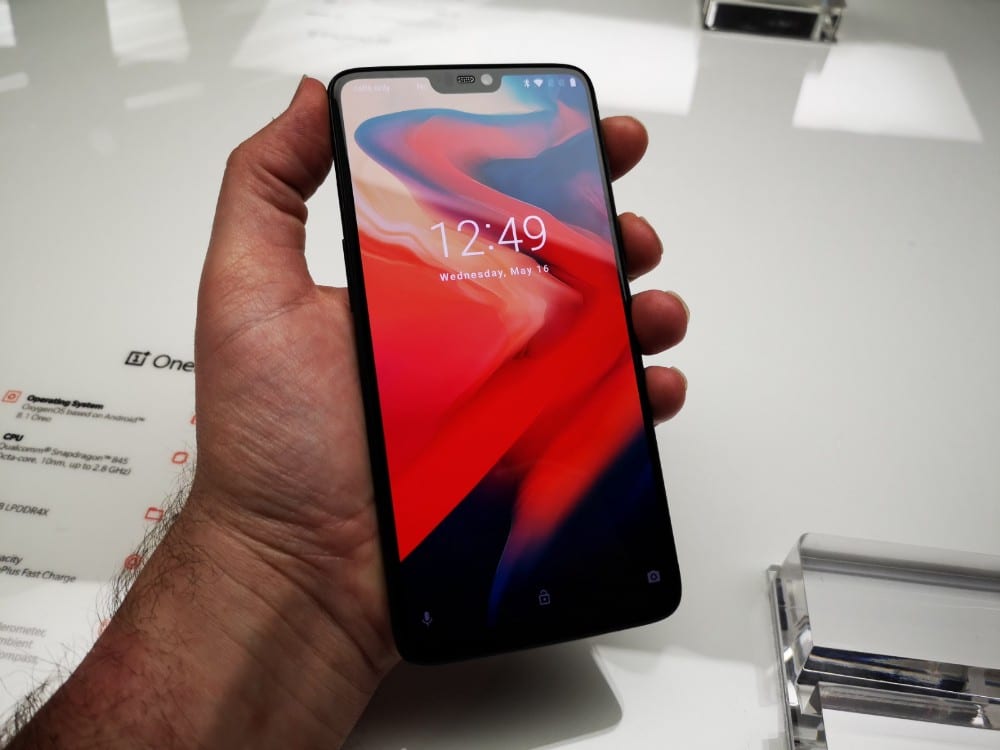 Much has leaked over previous weeks, but at least today could give ‘closure’ with the full specs revealed (it does have water resistance, but doesn’t have wireless charging) and an impressive set of specs they were.

OnePlus chose to get through the specs in a single minute, stating that the real benefits of the phone don’t come merely from looking at a spec sheet. Yet, with Qualcomm’s flagship Snapdragon 845 chipset and fast Gigabit LTE support (Cat 16, with 4×4 MIMO and 4 carrier aggregation) the phone is certainly fast.

Gamers will appreciate the enhanced gaming mode that restricts background performance to keep all resources on the target at hand.

The first thing you’ll notice because you simply cannot miss it is the 6.28-inch AMOLED display with a 19:9 ratio. Like other products with notches released recently, you can ‘turn’ the notch off in software and still retain a 18:9 ratio display. The bottom navigation controls can also be hidden and gestures used to move back, go home or access recent apps.

The fingerprint sensor remains on the back, while there’s also still the 3.5mm headphone socket that so many people still cry out for.

On the camera side, the f/1.7 aperture dual sensors, with larger pixels (19% larger than before) should offer a great experience in light and dark conditions, and the phone comes with 4K video recording at 60fps and a 720p 480fps slow motion mode that can record for up to two minutes. No more setting up the scene to capture those two or three seconds of slow motion, simply record a clip and edit later.

Keeping the phone going is from a 3,300mAh battery and the usual FastCharge support.

With the switch to glass, there is likely a lot of concern about the durability of using this over metal but Carl Pei claimed the new phones are as resilient as anything it has released to date, thanks to the use of Corning Gorilla Glass 5 and various processes that will leave some colour variants looking like they’re not made of glass at all.

O2 will be the exclusive network partner in the UK, offering the phone for sale on a range of contracts.

For more info, check out the press release below. I’ll have more information when I get my own review sample, whereby I’ll be able to give the camera a proper test to see if it matches up to the hype.

Presenting the OnePlus 6 – The Speed You Need

The OnePlus 6 – the first in OnePlus’ line of flagships to feature an all-glass design – is the company’s most sophisticated handset to date.

With a 6.28-inch Full Optic AMOLED 19:9 display – OnePlus’ largest-ever screen – the OnePlus 6 offers an immersive viewing experience, while keeping a similar form factor to that of the OnePlus 5T.

Combining new technology from Qualcomm® with OnePlus’ engineering, the OnePlus 6 is the fastest handset the company has ever produced.

“With the OnePlus 6, we challenged ourselves to deliver an external design as smooth and elegant as the work we’ve done inside the device,” said OnePlus Founder and CEO Pete Lau. “We’re proud of what we’ve accomplished, and we hope our users are too.”

Addressing a common pain point among smartphone users, OnePlus is committed to ensuring its phones remain as fast and smooth as the day they came out of the box. OnePlus achieves this goal through a combination of powerful hardware and intelligent software which work seamlessly together.

The OnePlus 6 is powered by one of the most powerful processors on the market, the Qualcomm® Snapdragon™ 845, which improves performance by 30%, while being 10% more power efficient. Coupled with the Adreno 630, which is 30% faster than the previous generation, the OnePlus 6 is a powerhouse for everything from streaming HD video to playing graphically intense games.

With up to 8 GB of LPDDR4X RAM, the OnePlus 6 effortlessly switches between multiple apps running at the same time without a single second of lag, allowing users to multitask with ease. The OnePlus 6’s dual-lane storage, based on UFS 2.1, ensures faster app loading and read/write speeds.

As with any OnePlus device, the OnePlus 6 is beautiful and functional in equal measure – now, with more screen than ever before. To provide users with as much screen real estate as possible, OnePlus designed the navigation bar so that it can be replaced with gesture control, freeing up even more viewing space for a cleaner look.

OnePlus has experimented and innovated with glass to deliver its boldest design to date. Donning an all-glass design, the OnePlus 6 facilitates better transmission of radio waves, providing users with up to 1 gigabit of download speed. Due to its strength and malleability, OnePlus used Corning Gorilla Glass 5 on both the front and the back of the device, shaping it with slight curves to create an uninterrupted look and feel.

OnePlus’ meticulous attention to detail is reflected in each of the OnePlus 6’s color variants: Mirror Black, Midnight Black and a limited-edition Silk White. For the Mirror Black and Midnight Black variants, OnePlus embedded a thin layer of film underneath the glass to create a sense of depth as light and shadow move on the device. A jagged texture was etched onto the film of the Midnight Black to produce a subtle S-shaped line when the phone is reflected in light. The limited-edition Silk White uses pearl powder to create a subtle shimmering effect.

The OnePlus 6’s dual camera system features a 16MP main camera, supported by a 20MP secondary camera. With an f/1.7 aperture, the 16MP main camera has been bolstered by a 19 percent larger sensor and OIS for outstanding performance in a range of lighting conditions. With Advanced HDR, OnePlus’ improved High Dynamic Range algorithm, the OnePlus 6 brings out shadows and enhances lighting in photos.

Portrait Mode will be available on the OnePlus 6’s front camera as well as its rear. Using AI, the front camera is able to apply a depth of field effect to selfies. Newly added bokeh effects, including circles, hearts and stars offer new ways for users to customize their portraits.

Like its approach to hardware, OnePlus’ approach to software is centered around an experience that is refined, efficient and minimalistic. New features are vetted by OnePlus users through channels like the OxygenOS Beta Program and only added once OnePlus is confident the features can improve the way users use their phone.

A Day’s Power in Half an Hour

The OnePlus 6’s fast charge – a favorite feature amongst OnePlus users – offers one of the fastest charging solutions on the global market. A half-hour charge gives the OnePlus 6 enough power for the entire day.

Purchase the OnePlus 6 at O2, the UK’s exclusive retail partner, from May 22nd, or pre-order in-store to pick up your OnePlus 6 before open sales on May 21st. O2 Refresh options include:

Magnus McDonald, Director of Product and Category Management at O2: “As the exclusive UK partner for OnePlus we are really excited to be part of another fantastic launch, this time, of the OnePlus 6. We’re proud to yet again bring one of the best phones in the market to O2 customers – continuing to offer great choice and quality. We’re delighted to have been on this journey since 2016 and watching our partnership grow as demand for OnePlus exceeds all our expectations. We look forward to continue working collaboratively with OnePlus and further building on our successful partnership.”

OnePlus recently launched a trade-in programme for Europe, offering even more flexibility to buy a OnePlus 6. The Trade-in programme offers great value across a range of handsets, including non-OnePlus devices. As an example, for May, trading-in a OnePlus 3 or 3T in good condition users can receive up to £190 / €201. The OnePlus 6 is built around The Speed You Need, and OnePlus users who act fast and trade-in their OnePlus 3 or 3T before the end of May will receive a bonus giving them a total of £205 / €216 towards their new OnePlus 6.