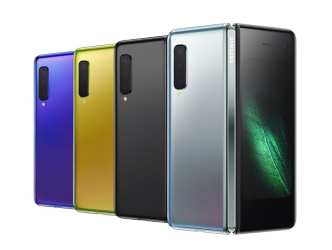 Even before ‘#FoldGate‘ or whatever social media is using to refer to Samsung’s latest woes, EE was planning a low-key launch for the upcoming Galaxy Fold.

As far as I can tell so far, the folding tablet/phone is still due to go on sale on May 3rd unless further problems come to light.

54 EE stores will have demonstration models available from April 26th for people to test out (and hopefully not break).

For the most part, the phone will be sold ‘under the counter’ to those who specifically ask for the phone (by registering an interest online), rather than being heavily promoted like other Samsung handsets – a policy likely to follow for the Huawei Mate X.

The Verge (and others) spent a lot of yesterday (April 17th) talking about problems with the Galaxy Fold, and today has published an official statement from Samsung.

It’s hopeful that these issues may be isolated and won’t impact the launch of the phone. It may also not be indicative of the long-term reliability for the world’s first folding phone to go on sale. Only time can tell, of course.

EE will shortly be notifying people that registered an interest in buying a Galaxy Fold to inform them of the pricing details, assuming people wish to go ahead.

Alternatively, those who want to reduce the monthly commitment can opt to pay £500 upfront and £98 a month. (Total cost of ownership £2852)

Update: For the time being it appears the only option will be the £500 & £98/m plan, due to a billing system issue.

The question now is will anyone that pre-registered want to go ahead and make the sale? Would you be put off by recent news, or do you accept that any new innovation suffers from early teething problems?