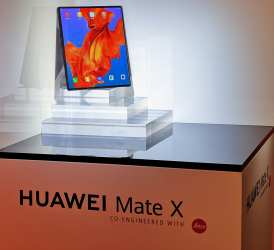 Samsung’s Galaxy Fold may have captured the media attention for a few days, but Huawei has thrown the cat amongst the pigeons with the Mate X.

The Mate X is the fastest foldable 5G phone, which also has its screen folding the opposite way in comparison to the Galaxy Fold.

Unlike the Samsung, there’s no notch or cut out for any of the cameras.

Along the edge is a triple camera setup instead, designed once again in conjunction with Leica. Huawei didn’t say much about the camera specs, as my guess is it will have some features from the upcoming P30 series phones to be unveiled at a separate event in Paris on March 26th.

What Huawei was willing to share is that the phone will offer best-in-class selfies. When folded for standard photos, the rear screen can be used as a secondary viewfinder, allowing the subject to adjust their posture or facial expression accordingly.

When in the unfolded position, the thinnest part of the phone measures just 5.4mm thick (thinner than the 5.9mm iPad Pro). There’s a lip for the camera (and USB-C port) that ensures the phone is flush when folded, and also aids your grip of the device. A concept similar to that of an Amazon Kindle Oasis.

Even when folded, the Mate X hardly becomes a chunky monkey, measuring just 11mm thick. And yet there’s still room inside for a 4,500mAh battery (half on each side).

Charging wise, Huawei has improved on the Mate 20 Pro and included 55W SuperCharge support (faster than the 50W charging on the Oppo RX17 Pro I recently tested), which gets the Mate X battery to 80% charge in just 30 minutes.

Security wise, the power button doubles up as a fingerprint reader.

When it comes to 5G, Huawei’s claim to be the fastest folding phone might also apply to many non-folding phones too.

With a 7nm Balong 5000 modem paired up to Huawei’s Kirin 980 chipset, the phone has a maximum downlink speed of 4.6GBps thanks to its quad-antenna design.

Although obviously this is down to network capabilities (so realistically, nobody is getting speeds anywhere near that maximum when 5G launches), Huawei pointed out that it translates to a 1GB download of a movie in just three seconds.

Even with more moderate speeds in the real world, it’s still clearly going to be a marked improvement on what’s available on 4G today – even if it is going to take some time for 5G to roll out to more than a handful of cities, airports and train stations.

Finally, Huawei has developed an innovative full cover case to protect the rear screen for normal use, so you will be able to easily transport the phone without causing damage.

Huawei intentionally left a few questions unanswered at our pre-briefing session, which is most likely because the phone is not yet ready for full-scale production.

There was a grand total of one working sample at the event, and nobody was allowed to touch it.

We were allowed to see it being demonstrated and hopefully in the coming months I’ll be able to get a proper hands-on look and find out more as to when this phone will actually go on sale.

I was somewhat unsure about the practicality and purpose of folding phones before seeing the Mate X, but it seems to be a far more usable device than Samsung’s effort.

It seems Huawei has come at the design from a different direction, having wanted to build an as close to normal phone for day-to-day use, with the extended display for specific purposes.

By comparison, with its small outer display, it would seem that Samsung thinks the open ‘tablet mode’ will be used more frequently.

It will of course be the general public that decides what works best, and whether the certain high price will convince anyone to part with a great deal of money to own one.

At least following today’s announcement, it seems there is now hope that folding phones will not turn out to be an unnecessary gimmick from manufacturers only interested in finding new ways to make money,

While that might also be true, the Mate X does at least look and feel like something I could see myself, and many others, actually using.

In this informal Q&A, a small group of us were able to ask some questions about the Mate X and Huawei’s 5G plans.

You can see the thread below.

I was also lucky enough to be one of a very small number of people able to get a feel of the phone for myself, and take a few shots.

In my short time with the phone, I was able to feel it in the hand – and although heavier (akin perhaps to two phones held together), it was certainly not uncomfortable. Having been in the game for some time, I’ve held phones that were considerably more weighty, so it was no big deal.

Also the screen didn’t feel much different to a phone with a plastic screen protector. It might have a different texture to what many are used to, but it’s not going to present any problems – besides the consideration about durability, and whether it will withstand scratching.

Walter Ji pointed out the Mate X goes through the same rigorous testing as any other smartphone.

One thought on “Huawei Mate X: A phone that shows foldable phones may have a future after all [Updated: I held one!]”