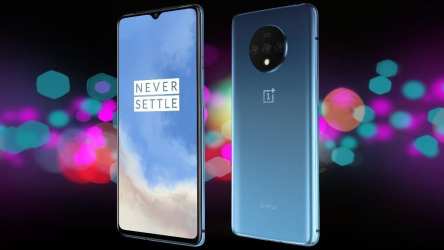 It doesn’t feel like a long time has passed since OnePlus launched the 7 and 7 Pro, and a quick look at the calendar shows it hasn’t even been six months since they were first announced.

Well today in India, one of two new phones was announced (or could there be more?!) but it should come as no surprise to OnePlus customers who know that it always has (near) six-monthly release cycles.

Although OnePlus kept most of the information about the 7T under wraps before now, it has been drip feeding some information before it was unveiled.

Now I can fill in the blanks, having attended a preview session in advance. Although for those of you who want to know the UK pricing and availability, you will have to wait until the London event takes place on October 10th.

As OnePlus already posted on social media and its community forum, the 7T now gets a 90Hz Fluid AMOLED display, similar to that of the OnePlus 7 Pro.

The display is still flat, but now has a 40% reduction in blue light emittance and a higher overall brightness, with a peak of 1000 nits. As you can imagine, this will make a huge difference on a bright day.

The full HD+ resolution 6.55-inch display has HDR10+ support, plus a 20:9 aspect ratio that makes it a little taller than the current OnePlus 7 (which had a 6.4-inch screen).

There’s a notch that’s 31.46% smaller than the one on the 7 (OnePlus likes very specific numbers like this) and an 86.5% screen-to-body ratio.

For security, the OnePlus has an improved in-display fingerprint reader that is now faster, unlocking in around 0.31 seconds. OnePlus told me the phone has an improved thumb unlock in particular.

The phone remains one of the thinnest flagships on the market at just 8.13mm thin. It weighs in at 190g.

In terms of internals, the OnePlus 7T has Qualcomm’s latest Snapdragon 855+ SoC, which offers a 15% uplift in GPU performance.

As with all previous OnePlus phones, the charging design ensures the phone remains cool when you’re topping up, so you can use the phone as normal without thermal throttling.

A new haptic vibration motor gives a ‘crisper and more satisfying’ experience, making it better for gaming (and, there’s also a dedicated gaming mode to ramp up performance to the max and limiting interruptions).

There’s only one RAM/storage configuration this time around; 8GB of RAM and 128GB UFS 3.0 storage. That should make it easier to choose what model to buy, leaving just a choice of what colour to go for.

There are initially two colours; glacier blue or frosted silver. In my opinion, the silver is really nice – especially with the detailing on the back.

Where most of the changes come is on the camera side.

As the leaked photo of the back showed, the OnePlus 7T now has a triple-camera setup, much like the OnePlus 7 Pro. There are some differences, and the camera specification is as follows:

Second up is a 16-megapixel ultra-wide angle camera (117 degrees, 70mm equivalent) with a six element lens and f/2.2 aperture. Stabilisation comes in the form of Electronic Image Stablisation (EIS).

Up front is a f/2.0 electronically assisted 16-megapixel camera which can also capture video at 1080p 30 frames-per-second.

A new macro mode allows for close-up shots as little as 2.5cm away, while the latest Nightscape low-light shooting mode can be used on both the primary and ultra-wide angle lenses.

On the video side, a brand new hybrid image stabilisation feature allows for ‘action cam’ style video recording at 1080p. Alternatively you can capture normal video at 4K 60 frames-per-second.

Android 10 is installed out of the box, which makes sense given the gradual rollout of the new Android OS to existing OnePlus 7 and OnePlus 7 Pro owners. Oxygen OS 10 has 370 optimisations to improve the user experience, from new animations and visuals, to new gestures (based on Android OS) and landscape app switching.

The phone also has a smart ambient display that displays info based on what you do regularly, and continues to be clever in predicting what apps you’ll use at any given time and having it automatically loaded in the background.

If you aren’t particularly bothered about a curved display, or having a camera that pops up, but do want a high specification, the OnePlus 7T now offers most of what the Pro model offers with the camera upgrade.

If we are to assume a similar price differential between the standard and Pro models, the OnePlus 7T might have just become the shrewd choice.

We won’t know the pricing until the UK launch event, but if I had to guess the new price, I’d take a punt on an extra £50 than what the OnePlus 7 sells for today. That should, by my total and uninformed guess, make the OnePlus 7T around £550.

From my brief time with the phone, the taller display with its minimal bezel and 90Hz refresh rate, made me want to do little more than constantly scroll up and down through apps and web pages for no particular reason.

It’s addictive and you really do notice the extra fluidity of scrolling, so it’s definitely not a pointless gimmick.

Of course you can survive without it, but why not have something you can get extra pleasure from if it’s an option?

Although OnePlus attracted some criticism for the perceived poor image quality on the 7 Pro, I was told it the company has learned a lot and made many improvements with the 7T.

As someone who has had a series of updates since May, which vastly improved the OnePlus 7 Pro camera performance, I’m hopeful the 7T camera experience will be a very positive one – although of course I cannot be sure until getting one to properly test out.

Meanwhile, if you haven’t already looked through my photo gallery, please do take the time to check out photos taken on the OnePlus 7 Pro. As you will see, the camera isn’t that bad at all.