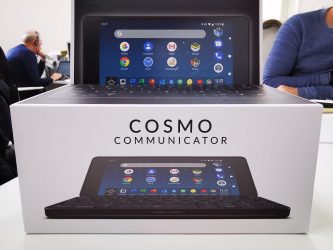 At the start of this year, Planet Computers (the company behind the Gemini PDA) showed off a prototype of its second-generation portable computing device that uses the classic Psion keyboard design, connected to modern-day hardware.

The Gemini is still available to buy, but the Cosmo Communicator takes things to the next level with better phone functionality, an improved camera, and a backlit keyboard to name but a few of the new features.

I was invited to Planet Computers’ HQ in central London to take an exclusive look at the final production samples, which are just days away from being signed off to enable full-scale production to commence and the original Indiegogo backers to receive their devices.

Following the completion of these deliveries, customers who have purchased from Planet Computers’ own website will have their orders fulfilled.

The most obvious change from the Gemini to the Cosmo is the inclusion of an outer OLED display, along with a fingerprint sensor that also acts a control, being made of two buttons that allow you answer or reject a call, scroll left and right in menus, and more.

The outer screen and software is powered by a separate CPU and using custom APIs. While most people may not care to know this, there’s a good reason for it, namely it allowing the screen to remain usable even if users opt to run a different OS, such as Sailfish OS or Linux.

Just like the Gemini, there are lots of options for users who may not wish to be limited to just Android, or want to dual-boot into another OS.

The model I saw was only in Android mode, and for my own personal needs I expect this is all I would ever want to use.

I was quite surprised by how much can be done from the outer screen, and it reminded me very much of managing a smartphone using a smartwatch.

It certainly makes it possible to keep the phone closed most of the time when you don’t need the large display or keyboard.

From the external display, you can make and answer calls, search your phonebook, view all of the Android notifications, toggle functions like flight mode or a portable hotspot (the latter a very useful shortcut), and even use the camera to take photos or video, using the 1.9-inch screen as a mini viewfinder.

There are also additional LED lamps to let you know when Wi-Fi is enabled, or a hotspot, the battery is charging and more (the full details are included within the comprehensive user guide included in the box).

All of the UI work was done in-house, with many changes having been made just within the last couple of weeks ahead of full-scale production.

Should any changes be made subsequently, there’s a separate over-the-air update process to upgrade the UI.

The fingerprint sensor makes it easy to unlock the phone, and is positioned such that when you have the PDA open, you can simply reach around and unlock using the same sensor. Unlocking is very quick and accurate.

On the inside, you will notice the addition of a third hinge and a slight change in the thickness of the metal gives more rigidity over the original Gemini.

The keyboard does benefit with no flexing in the centre, and a more solid space bar.

There’s still the same 18:9 ratio 6-inch full HD+ display, which fits the design well. There could perhaps have been scope to use a wider screen and reduce the side bezels, but it doesn’t feel like there’s wasted screen real estate.

You also now get the backlit keyboard, which was the one thing that I longed for with the original.

For anyone looking to buy an use this as a secondary device, the backlit keyboard is probably a more important consideration than the outer screen functionality!

Hardware wise, the Cosmo comes with a 4,220mAh battery and a MediaTek P70 SoC with 6GB of RAM and 128GB of expandable storage, with three variants for different mobile bands around the world.

There’s a model for Japan, Europe and the rest of the world, plus a specific variant for Verizon in the US. All of the bands supported are available to view in the specs section on the Planet Computers website.

The SIM tray (now accessed from the side and not behind a metal panel that has to be unclipped) can take two nano SIM or a single nano SIM and microSDXC card.

Alternatively an integrated eSIM allows for two SIMs and a memory expansion at the same time.

The Cosmo also supports dual 4G, including support for VoLTE and VoWiFi.

Two USB-C ports remain as before, with added functionality including fast charging from one of the inputs and support for an external hub with simultaneous charging.

There’s support for USB audio too, although audio fans will be pleased to note that there’s a 3.5mm headphone socket on the Cosmo too!

Whereas a camera was an optional extra on the Gemini, the internal camera on the Cosmo is a 5-megapixel effort, suitable for basic video conferencing style usage, and on the back a powerful 24-megapixel sensor.

The sensor type is unknown and I’d have to wait to get a review sample to test out how good it performs in various lighting conditions.

I loved my time with the original Gemini, and the Cosmo has completed my wishlist. The backlit keyboard is the feature I welcome the most, although the many other improvements are obviously good too.

I was particularly impressed with the functionality in ‘closed’ mode, with will allow you to deal with most notifications and alerts without ever having to open the device.

As with the Gemini, the Cosmo Communicator is a device for a specific segment of the market. It’s perhaps for those people who don’t wish to, or simply cannot, carry around a laptop, yet can slip this into a jacket pocket and use it for most of the common tasks like word processing or data entry.

The large battery makes it a perfect wireless hotspot, while it can also be docked so you can use a desktop monitor, keyboard and mouse – using either Android OS or perhaps another more desktop-friendly OS.

At just under £800, it’s certainly not a cheap investment but – like the Gemini – it is going to be invaluable for a lot of people. And it’s worth noting that if you’re not so worried about a backlit keyboard, the original Gemini will save you £200 or £300 depending on whether you want the 4G+Wi-Fi or Wi-Fi only model.

When bringing up the subject of 5G, I was pleased to hear that Planet Computers is already looking closely at 5G, in particular waiting to hear more about what chipsets MediaTek will make available in the coming year.

It means that, yes, a 5G device will happen – but not in the immediate future. As such there’s no need to fear that in a few weeks a 5G model is going to be announced.

I’m hoping I’ll be able to get a chance to properly test out a Cosmo Communicator in the coming weeks and tell you if it really is as good as I strongly hope it will be.

The Cosmo Communicator is available to purchase for £799 including VAT. In addition to the variants for different markets, there are also a large choice of keyboards for a variety of different languages.

Disclosure: I was invited to attend a briefing with the Cosmo Communicator but received no payment for the visit or any subsequent write-up. I have no vested interest in the project, besides my original love for the Psion Series 5 and its keyboard design – which in turn sparked my interest in the products from Planet Computers. Any review sample I receive in the future will be a loan product, and again my thoughts will be my own.

3 thoughts on “Hands-on with the Cosmo Communicator; virtually ready to ship to original backers”