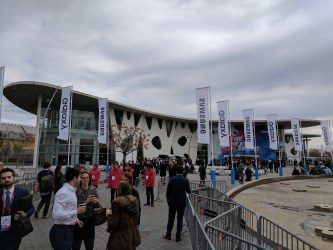 So today is the day I’d have returned home from what should have been the biggest global event in the mobile industry.

The cancellation of Mobile World Congress was almost certainly for the best, even if some people thought it a massive overreaction at the time.

Unless someone has access to view an alternative timeline, we’ll never know if the decision helped avoid a mass breakout of Coronavirus, potentially forcing people to be quarantined in their hotel, or if it would have had no impact at all.

I think on balance, the right decision was made. For the same reason companies had to take Y2K seriously, and airlines or train operators sometimes have to make decisions to reduce, or cancel, services when bad weather is predicted, even if the forecasts later turn out to be a little off base.

There’s a phrase for this; Better safe than sorry.

The fact is, most attendees were going as employees of businesses that have a duty of care for staff. This would have been a major reason companies started to pull out even before the ‘threat’ of the virus was fully known or appreciated.

At the same time, people who work for themselves had to consider the impact of falling ill because of their visit, either for the extended time to recover (and a loss of income), or how it might affect friends and family.

In that regard, I’m glad my trip was cancelled. The company hosting me had to think of my welfare, as well as the implications for sending me to a potential virus hotspot.

However, I am still unashamed to admit that I’m disappointed I couldn’t go and the event couldn’t go ahead as planned. But I blame the virus, not the organisers.

A lot of people have said this might mark the end of MWC, as it allows companies that pay an incredible amount of money to be there to realise there’s life without the event.

Besides the cost, the bombardment of meeting requests ahead of time, the long queues for everything, the risk of a public transport strike, the crime problem, the difficulty of getting from venue to venue for all those ‘off-campus’ events – or even just getting from one hall to another, the alternative is staying home and not seeing anything.

To me, that is a step too far.

It isn’t for everyone

I have no problem with those who choose not to attend. I’ve missed the odd year and, when primarily writing news, I found the luxury of sitting in an office, or even at home, beneficial for collating all the news in one place.

It’s far easier and a lot less stressful than trying to find a place in the media centre, especially when you can end up spending so much time in there that you begin to wonder why you went at all.

So in that regard, MWC isn’t for everyone.

But if you want to meet people and see new products, as well as attend the events where the biggest executives will also be attending, you have to go. End of.

In recent times, I’ve come to realise MWC is about more than just getting news stories. News on the Internet during MWC is so heavily saturated that it’s almost not worth publishing anything until the event is over.

Sure, you’ll feel bad for not chasing the same stories as everyone else, but what’s the point if you’re not the BBC or working for one of the big tech sites (who send out multiple staff to spread the workload)?

You should be there for the networking, the events, getting hands-on with products and walking the halls to look for the things you just wouldn’t get to see otherwise.

None of that can be done by watching a livestream.

And that is why the smaller firms still need to go, because there’s little chance of me ever getting to meet them anywhere else.

Oh, and it’s also a fantastic city to have a beer in, enjoy the local food, and in a somewhat weird way, feel like you’re on holiday.

It’s fair to say we all love to hate MWC, just as people have similar feelings for other big shows like IFA or CES.

But at the same time, MWC is still full of people who deride the event, but simply can’t keep away from it. It’s partly down to a fear of missing out, but also because you really are missing out.

If this week is anything to go by, it has absolutely proven the need for MWC, as we’ve all been subjected to a series of livestreams made from empty rooms.

It’s been an extremely weird and surreal experience, and companies have almost certainly had less attention around their announcements than if we’d been there in person to see what they were launching.

Sure, pre-briefs have and always have been an important part of MWC to lighten workloads, but there’s still a benefit from going to the launches, seeing the products, and having those post-event one-to-one meetings.

Perhaps environmental concerns may alter the shape of big events in the coming years, but we’ll always need opportunities to go and see people, and products, in the flesh.

Mobile World Congress might have become a behemoth, but if you consider the cost of individual companies putting on their own events, at different times and in different locations, that’s an awful lot more flights moving people around than having everyone in a single city for a few days once a year.

The local economy would certainly miss us, and I feel for the local residents that missed out on a economic boost – even if I don’t shed too many tears for those who blatantly seek to profit.

I for one will now be looking forward to IFA later this year, and later the opportunity to register for MWC 2021.

I fully expect it to be emerge bigger and stronger, as the loss of MWC this year has definitely left an empty feeling in my stomach.