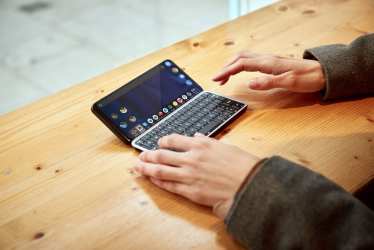 Planet Computers has today opened a crowdfunding campaign for its latest keyboard-equipped smartphone. The Astro Slide has a brand new slide design, but still keeps the Psion keyboard users love.

The key change is the new ‘rock up’ slide mechanism that enabled Planet Computers to remove the external display and make it closer to a regular smartphone when the keyboard isn’t needed.

And despite that new slide hinge mechanism, the Astro Slide hasn’t altered the keyboard itself, which is vital because it’s the ex-Psion design that made the Gemini and Cosmo models so liked by users, and set things apart from rivals.

As before, the Astro Slide has been designed by Martin Riddiford – the designer of the Psions. The keyboard retains the backlighting that was introduced on the Cosmo.

Chipset wise, the Astro Slide will be powered by a MediaTek 5G Dimensity 1000 chipset, giving it 5G and Wi-Fi 6 connectivity to make it more futureproof, at a time when both are becoming more desirable.

The front, scratch-resistant, display measures 6.53-inches and the Astro Slide comes with a 48-megapixel rear facing camera, as well as a front camera for video calls.

Like earlier releases, users will still be able to take advantage of the multi-boot capability, if wishing to run more than just Android 10 – such as Linux.

It also allows the use of the same custom built applications from Planet Computers that were available on the Gemini and Cosmo, such as Agenda, Notes and Data applications.

These are applications designed to take best advantage of a landscape view, and based on versions originally available to Psion users in the 1990s.

“This is Planet’s first 5G device. Astro’s RockUp slider brings all the functionality of both a smartphone and a powerful computer to the palm of your hand. Astro Slide gives you the freedom to write, create, animate, communicate and be entertained in one familiar form factor.

“Astro is the first of Planet’s transformer smartphones where the large touchscreen display is on the outside of the device just like on a modern smartphone. But when transformed using the RockUp™ slider, the full physical keyboard is revealed, with the display in landscape orientation, like on a laptop.

“Keyboard enthusiasts can now leave the laptop behind and remain productive, connected and in touch with the Astro Slide in their pocket.”

Other features include a fingerprint sensor, NFC for mobile payments, two nano SIM slots (plus eSIM), at least 6GB of RAM and 128GB of expandable (via microSDXC cards) storage.

The full details of specifications and pricing can be found via the Indiegogo link below.