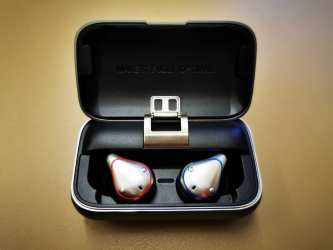 Everyone and their dog is making wireless earphones these days, making it a highly competitive market.

Even though wireless earphones have been around for a considerable time, it can be said the real interest didn’t happen until Apple launched the AirPods.

Since then, we’ve seen clone after clone with eBay, AliExpress and other sites full of extremely cheap copies.

Meanwhile, we’ve also seen new products that have their own design identity and features.

In the case of the Mifo 05 Plus, before even testing out the sound quality, the killer feature is the 2,600mAh battery case that gives owners up to 100 hours of music playback, thanks to the ability to recharge the earbuds considerably more times than rival products (around 15).

Despite the use of a larger battery, the case is still small and light enough to fit in pockets, keeping the earbuds safe and also serving as an automatic power toggle.

The only disappointment is the case uses a Micro USB charging port rather than USB-C, forcing a lot of people to carry two types of cable.

That is of course assuming you need to carry a cable with you at all, given the exceptional battery life potential as long as you’ve charged the case beforehand.

It’s worth noting that the Mifo 05 Plus doesn’t have noise cancelling capabilities, relying instead on a firm fitment within the ear canal.

In the box you’ll get a range of silicone earcaps of different sizes, giving a stronger fit so you won’t lose them when out and about – or leak sound to your neighbours.

You can also choose to use both earbuds at the same time for stereo sound, or just one if you’d prefer to hear your surroundings (perhaps a good idea for hearing last minute platform changes at your local train station).

You can also pair each earbud separately, if you’d like someone else to be able to use the earbud you’re not using and jointly listen to the same music.

The earbuds use Bluetooth 5 for usage up to 20 metres away, with low-latency.

Obviously the quality of sound is rather important, and although I could hear a faint humming noise that was initially a little disconcerting, it soon became nothing more than a minor hindrance when there was no audio playing.

The review unit I received was pre-production, so hopefully this was just an issue with my particular earpieces.

The sound itself is clear in the mids and highs, but not as great in the bass department as my personal preference would prefer.

That was with listening to music via Spotify (streaming at the highest possible quality and with no audio adjustments).

These days I am more likely to be listening to the sound in games, or watching video via Netflix, YouTube or Amazon Prime Video.

For action movies, I found the bass far more punchy and enjoyable.

The design of the earbuds themselves may not suit all tastes, given Apple’s tendency to set the bar.

This in turn leads most competitors to copy the same style, making this a bold move for Mifo – given it is a relatively unknown brand, in the UK at least.

I found the earbuds comfortable in my ear, and stable enough that I didn’t fear they’d fall out. After a few weeks using them, I’m happy to confirm that I still have both of them!

I found the controls of the buttons on each earpiece to be a little fiddly though. Of course muscle memory will soon have you adjusting the volume or skipping tracks with ease. It’s all a case of knowing exactly where to press.

For the most part, especially if using them when watching a film, you’ll use the phone, tablet or laptop itself to manage everything. Remember, once you dock the earbuds in the case they’ll switch off automatically.

I’d have certainly preferred it if the charging case had come with USB-C, now that after a long transition period most things on sale have made the switch, in all but the lower end of the market.

Mifo isn’t pitching itself as a low-end accessory maker, so it does let things down a little. But, as I said above, you don’t need to charge often with such decent battery life that should cover you for most trips.

If you want to stand out from a crowd of people wearing dangly white buds, and not spend too much money in the process, the Mifo 05 Wireless earbuds are worth a look.