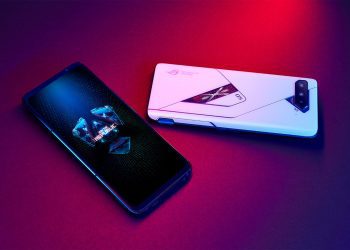 That’s right, (up to) 18GB on a phone. Considering a base MacBook Pro comes with just 8GB of RAM, that’s an awful lot of memory for a gaming phone.

But in a sector where bragging rights often usurps everything else, this is definitely going to put the ROG Phone 5 series at the top of the tree for kudos.

And along with things like Qualcomm’s top-spec Snapdragon 888 chipset, 5G, optional secondary cooling, a rear mounted OLED display that can be customised, and obligatory LED lighting effects, it ticks all the boxes for the avid mobile gamer.

There’s a 144Hz refresh rate AMOLED display (1080×2448 pixels) made by Samsung, with 300Hz touch sampling rate and ultra-low latency at just 1ms, all of which is protected by Corning Gorilla Glass Victus.

To keep the phones going, there’s a 6,000mAh battery with 65W fast charging. The phone even has two USB-C ports.

A gaming phone with awesome graphic potential wouldn’t be much good without great audio or control, but there’s no worry there as it comes with two amplified front-facing speakers powered by Dirac technologies, and an upgraded AirTrigger 5 control system with multiple ways to control the phone – including two hidden touch sensors on the rear.

Connectivity comes in the form of 5G, Wi-Fi 6E (including 6GHz support) and Bluetooth 5.2.

The ROG Phone 5 Ultimate, with 18GB of RAM, is not destined for the UK at the current time, nor the ROG Phone 5 Pro with 512GB of storage, but the ROG Phone 5 will be released in two configurations when it goes on sale starting at the end of April: