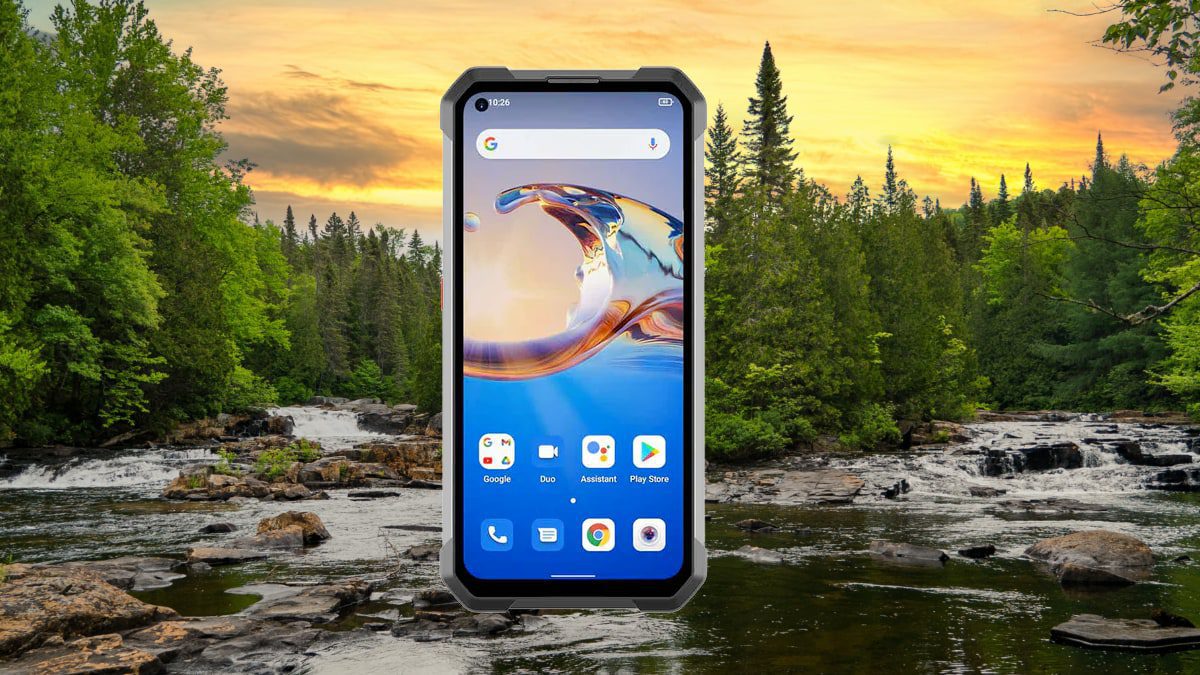 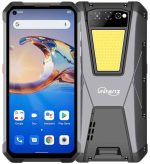 Once in a while something comes along that stands out from the crowd, and this rugged monster from Unihertz certainly stands out given its huge size!

Following my review of the Unihertz Jelly 2E, I was quite surprised to be offered another phone to review that couldn’t have been more opposite to the tiny pebble-like phone if you tried.

The TANK is a monster of a phone, and might initially seem quite laughable. I mean if you turned up at a party with this in your pocket, people would certainly look at you in a funny way.

However, like the Jelly phone, Unihertz is finding unique audiences that want more than just ordinary smartphone black-slab smartphones, and I applaud them for existing and creating such devices even if only for a relatively small market.

I’d venture as far to say that I really enjoyed using the TANK, even if I wasn’t able to test it as thoroughly as someone who actually travels into the wild on a regular basis. Bar some countryside walks, I am yet to take it camping for a week – as would be one of the significant usage cases for this phone.

If you’re the sort of person who doesn’t really feel comfortable with a standard, often fragile, phone, and have already been looking at a more rugged offering, this phone well be something to put on your shortlist.

There are already many rugged phones to choose from, but none come with a totally bat-s*** crazy 22,000mAh battery that can keep you going for weeks between charges.

After 11 days of usage, the TANK fell to just 51%. That wasn’t with intense usage every day for sure, even if it is a fully functioning 4G smartphone with a decent enough chipset that would allow you to use it just like any other smartphone if you so desired (in all likelihood, if you’re going off-grid to camp or similar, you may not be the type of person to then spend all that time playing CoD Mobile or watching Netflix).

That battery can also be used to charge other devices, and with such a big battery capacity it means the phone can also go on for days, if not weeks, as a 4G portable hotspot. Just in case you may have decided to bring along a tablet or laptop too.

This also means it could be just as useful for use at exhibitions, car boot sales and other locations where you need a mobile broadband connection, all while still being able to power other devices and be used as a normal smartphone in its own right.

The TANK is a beast both in size and weight, which is why it isn’t ever going to be a ‘going out’ phone. Due to the plentiful battery, the phone weighs in at a very hefty 560g, so you’ll definitely notice if you carry it on your person. But, chuck it in a backpack and it will be no heavier than a standalone power bank, many tablets, and certainly much lighter than a laptop.

So it’s heavy, but not so much so that it is unusable or uncomfortable – although I can’t see people making long voice calls on it. Given nobody speaks long on any phones much these days, is that even a concern?

Anyway, let’s get on with looking at what the phone is all about.

Firstly, the phone has a solid rubberised edging, with a metal back and sides, and it’s all held together with Torx screws that should allow for servicing if anything does break down the line (Unihertz already has a part of its site that supplies official spares for doing repairs, although the TANK is not included – yet).

There’s no need to open the IP68-rated phone up normally though, given the SIM tray is at the top (pulled out with a fingernail, so not needing a SIM eject tool – nice) and the USB port (and headphone jack) is in a sealed port at the base.

There’s also an Infrared port at the top to control TVs, set top boxes, air conditioners etc, as well as volume keys on the right-hand side above the power button with integrated fingerprint reader.

On the left are not one, but two, shortcut buttons that can be customised for a single press, double press or long press. That’s six programmable shortcuts in total!

On the rear of the phone is where all the great things are, from a 108-megapixel primary camera with LED flash, to a rather mundane 2-megapixel macro camera.

Alongside those two image sensors is a very impressive 20-megapixel sensor that works in conjunction with the integrated Infrared lighting to give you proper night vision, with a reasonable coverage range of a good few metres, as well as the ability to film in night vision mode also.

Beneath that is a whopping great LED torch, that boasts a brightness of 1,200 lumens. To put that into context, this is significantly brighter than the Cat Eye headlamp on my bike that maxes out at 800 lumens. It’s not as precisely focussed as a bike light, but gives a wide spread that can easily light up a large room or outdoor area – and is clearly ideal for camping, with an app to control the specific brightness level required – or activate various emergency modes to attract attention from potentially many miles away in open space.

Finally, on the front is a near 7-inch Full HD display (6.81-inches to be exact) that’s bright and responsive, if only with a 60Hz refresh rate.

Normally, the primary camera will be considered the most important thing on any smartphone, but here there focus is definitely more on that night vision camera capability, as well as the incredible LED torch that can be used to support the main camera.

The 108-megapixel camera performs well in good light, and you can even capture video at 1440p (60fps). However, there’s no specific night mode and this means the camera falls down significantly once it gets dark.

Night vision can then step in to fill that void, but besides being limited to black and white, you also can’t take photos with much depth as the Infrared lights can only work so well and the effectiveness drops off after around 5-10 metres.

Using the 1,200 lumens light obviously makes a big impact, but amazingly in the camera test below, it still falls short of a long exposure shot on a normal smartphone (in this case, a Vivo X80 Pro).

I can only hope Unihertz can look at updating the camera application to include a night mode, but despite lacking this feature you can still use the TANK in ways that you can’t use an ordinary smartphone – and the 1,200 lumens torch works better with your own eyes than that of the camera.

At a closer range, the Infrared camera is great, while the 108-megapixel sensor is great at capturing detail in daylight.

With the 6nm MediaTek Helio G99 SoC, the phone is kitted out with the same CPU and GPU as many other modern smartphones, including the Realme 10, Poco M5, and the Motorola G72.

With 8GB of RAM and 256GB storage, the phone really can be used like any other mid-range smartphone, and the AnTuTu benchmark score shows a respectable score. Clearly not up there with the high-end chips, but absolutely fine for running anything you want to throw at it.

Given the weight of the phone, playing games for hours on end might not be a high priority, but if you do decide to game – or just consume content on YouTube or Netflix, the battery will let you do so for longer than you’ll be able to stay awake!

The phone also has a range of tools that includes controlling devices using Infrared, sound and pressure monitors, a range of measuring tools and even a heart rate monitor.

Unihertz ships the phone with Android 12 installed, and it’s not yet clear when Android 13 may come – or how often the security updates will come (at the time of writing, my device is up to November for security patches, but has had a further update to fix some bugs – most notably fixing a typo on the Camp(l)ing Lamp feature!).

It’s worth noting that the phone does support two SIMs, and both supporting 4G access at the same time, but in terms of maximum speed the phone appeared to max out at two carriers, which might reduce the overall speed you can achieve over 4G. In my own tests, using the TANK as a hotspot on numerous occasions, I got up to 200Mbps with it more often averaging around 100-120Mbps.

That isn’t the fastest 4G can offer, and in the same locations I could often get double the speed (or even more) thanks to the aggregation of more 4G bands, but it’s still extremely good and perfectly fine for this device.

Wi-Fi also worked well, with the larger device having no issues connecting to my home router and maintaining a solid speed that pretty much maxed out the 433Mbps connection.

If you need faster data, you’ll need to look elsewhere but I doubt this is a concern for most of the target market.

The TANK is unlike any phone I’ve reviewed before, and that includes other rugged phones. This really is a powerhouse that to some might seem like an answer to a question nobody asked, but to others will be the perfect answer for their individual need.

The big battery, the super-bright flash light, its night vision feature, or just the fact it still works as a modern smartphone without a crippled, ancient chipset, means there’s very little to dislike about the TANK. Indeed, my main complaint is the lack of a night mode on the camera – but if you’re out camping, night time photography may not be that high up on your list of wants or needs.

The ability to keep you connected even if you’re off-grid for days or weeks at a time cannot be underestimated.

The Unihertz TANK is currently available for US$369.99 (approx £310 before shipping) and can be purchased on the Unihertz Website.