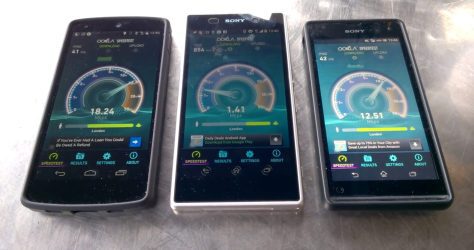 After receiving my 4G-enabled SIM card from Three UK – ahead of the activation of all users planned to be completed by mid-February, I headed into London to do some testing – which has resulted in an epic video over 40 minutes long, and loads of data to go through and digest!

Doing more than one test seemed the only fair way to allow for fluctuations (some examples of which are seen in the video) but it made the video long. The video does, however, show that some speeds peaked above where they ended up.

I had various issues with O2’s network, which were unfortunate and quite damaging for O2 as a network trying to shake off a reputation for poor data speeds as it is.

Rather than delay testing until I could get a Vodafone 4G-enabled SIM, I opted to leave the network out this time around.

There are a few caveats to be aware of:

Of course, I’ll be doing more tests over the coming months, so this is just the beginning (evil laugh!). However, I might skip doing more lengthy videos for the sake of my sanity – and yours.

Anyway, enjoy the video (you might wish to watch at double speed), or if you just can’t face it – look underneath for my summary table.

Where relevant, I’ve highlighted the fastest speeds (and lowest ping times) in bold.

One conclusion I can draw from the testing is that 4G in London varies a lot – as London is clearly very busy and congested. Some of the slow speeds may well be attributed to slow backhauls, which each network will need to heavily invest in going forward.

Many users may look at the data above, especially Three users already enjoying a network almost fully DC-HSPA enabled, and think that 3G can often outperform those numbers. And they’d be right, except that the 3G speeds were way down on what I’ve experienced – so 4G is still a step up.

Perhaps the biggest improvement for Three users will therefore be from the hugely increased upload speeds. For uploading videos to YouTube, for example, the savings in time will be incredible.

And when push comes to shove, there’s one final point that isn’t shown in the data above. Three’s 4G service comes at no extra cost, and with the option of totally unlimited data.

Talking of which, word is that Three will soon end the current £10 discount applied to The One Plan (£15 on a 12-month SIM-only contract, £18 on 30-day SIM-only contract) and replace it with a £5 discount, meaning new customers will pay £20 and £22 respectively. So if you’re looking to go with Three for 4G, even before every user is activated, don’t hang around for too long!

Edit: Corrected an O2 test shown in Kbps to Mbps. Thanks to qasdfdsaq on Digital Spy for noticing!

3 thoughts on “Testing Three’s 4G network in London, with EE and O2 comparisons”