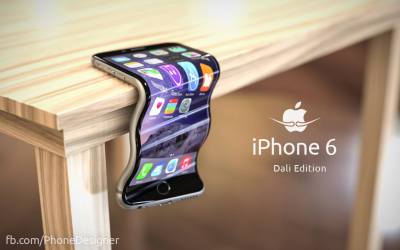 I’ve resisted writing anything about the latest Apple scandal, nicknamed ‘Bendgate‘, until now but it seems the problem could be a lot bigger than some people would like us to believe. History is almost certainly going to repeat itself.

Indeed, it could well point to an inherent design flaw in the casing (where the buttons are), causing damage to occur a lot easier than on other similarly sized devices.

I still remember all the fuss over Antennagate, back when I was Editor of What Mobile magazine, and how history seems to have been re-written over time. To many people today, there never was a problem and it was probably just down to jealous haters who ‘had it in for Apple’.

Yet I can remember a bit more vividly that there definitely was a problem, and Apple simply managed to deal with the situation in a way that only Apple can.

What the media is saying about Bendgate:

We got an acknowledgement of the problem from Apple, but from the outset, it seemed as if Apple wasn’t really taking the problem seriously. Apple even organised an event at short notice to explain the situation, which culminated in Apple offering free bumper cases to iPhone 4 users (perhaps a clue that there might actually be a problem, or else Apple could have done nothing and stuck to its guns).

The way it explained the fault was highly amusing, as Steve Jobs decided to demonstrate that other phones you could consider as iPhone 4 rivals could in fact be just as bad, even if the methods to kill the signal were somewhat unrealistic and often farcical compared to simply holding the phone normally.

This of course triggered the whole ‘you’re holding it wrong’ joke, which has made a comeback as the hardcore fanboys that appear to be in total denial (including journalists and analysts) are trying to argue that no phone should go in a back pocket anyway. In other words, you’re now storing it wrong.

Apple is yet to say anything on the subject, but I’m convinced we’re going to see a repeat of how Apple handled Antennagate to make this problem go away, and for everyone to blame themselves for any damage to their phone instead of Apple.

Perhaps at Apple’s next event in October, we’ll see Tim Cook on stage with a Galaxy Note 4, LG G3 and other high-end models to go through in turn and show that they can all be made to bend too, given enough force.

Even before Apple does anything, this is already happening elsewhere, and it’s quite staggering that it’s deemed by some to be okay to have a major problem – as long as others have a similar problem too.

And who else is as excited as me to see what might come from Apple in the form of a press release, like the one it sent to the world in 2010:

Letter from Apple Regarding iPhone 4

The iPhone 4 has been the most successful product launch in Apple’s history. It has been judged by reviewers around the world to be the best smartphone ever, and users have told us that they love it. So we were surprised when we read reports of reception problems, and we immediately began investigating them. Here is what we have learned.

To start with, gripping almost any mobile phone in certain ways will reduce its reception by 1 or more bars. This is true of iPhone 4, iPhone 3GS, as well as many Droid, Nokia and RIM phones. But some users have reported that iPhone 4 can drop 4 or 5 bars when tightly held in a way which covers the black strip in the lower left corner of the metal band. This is a far bigger drop than normal, and as a result some have accused the iPhone 4 of having a faulty antenna design.

At the same time, we continue to read articles and receive hundreds of emails from users saying that iPhone 4 reception is better than the iPhone 3GS. They are delighted. This matches our own experience and testing. What can explain all of this?

We have discovered the cause of this dramatic drop in bars, and it is both simple and surprising.

Upon investigation, we were stunned to find that the formula we use to calculate how many bars of signal strength to display is totally wrong. Our formula, in many instances, mistakenly displays 2 more bars than it should for a given signal strength. For example, we sometimes display 4 bars when we should be displaying as few as 2 bars. Users observing a drop of several bars when they grip their iPhone in a certain way are most likely in an area with very weak signal strength, but they don’t know it because we are erroneously displaying 4 or 5 bars. Their big drop in bars is because their high bars were never real in the first place.

To fix this, we are adopting AT&T’s recently recommended formula for calculating how many bars to display for a given signal strength. The real signal strength remains the same, but the iPhone’s bars will report it far more accurately, providing users a much better indication of the reception they will get in a given area. We are also making bars 1, 2 and 3 a bit taller so they will be easier to see.

We will issue a free software update within a few weeks that incorporates the corrected formula. Since this mistake has been present since the original iPhone, this software update will also be available for the iPhone 3GS and iPhone 3G.

We have gone back to our labs and retested everything, and the results are the same— the iPhone 4’s wireless performance is the best we have ever shipped. For the vast majority of users who have not been troubled by this issue, this software update will only make your bars more accurate. For those who have had concerns, we apologise for any anxiety we may have caused.

As a reminder, if you are not fully satisfied, you can return your undamaged iPhone to any Apple Retail Store or the online Apple Store within 30 days of purchase for a full refund.

We hope you love the iPhone 4 as much as we do.

Thank you for your patience and support.

The best bit must be where Apple shifted the blame onto the networks. It’s fair to say that the operators were fuming over this, but guess what? It worked perfectly.

Four years on, people are of the opinion that Antennagate wasn’t a big deal. It was just a tiny problem that only happened in a few places, and was probably down to bad signal anyway.

And all those users with an iPhone 3GS that got a hastily released software update just days later will have seen their signal go down, so the iPhone 4 always looked better.

All of this was a very carefully managed damage limitation exercise that I’m certain will be repeated again soon, and with the loyal following of so many users that will defend Apple, how could anyone expect anything else?

I can’t wait to see how Apple will play things this time around, but I do have to wonder who will get the blame this time.

Until then, anyone with a new iPhone should probably invest in a strong case.

PS. Does anyone think the ‘We have discovered the cause of this dramatic drop in bars, and it is both simple and surprising.’ line makes a wonderful BuzzFeed article headline?