So, everything is now official. The Note 7 has been announced, and the final specs are now fully known. In addition, there’s a new Gear VR headset and a range of accessories. 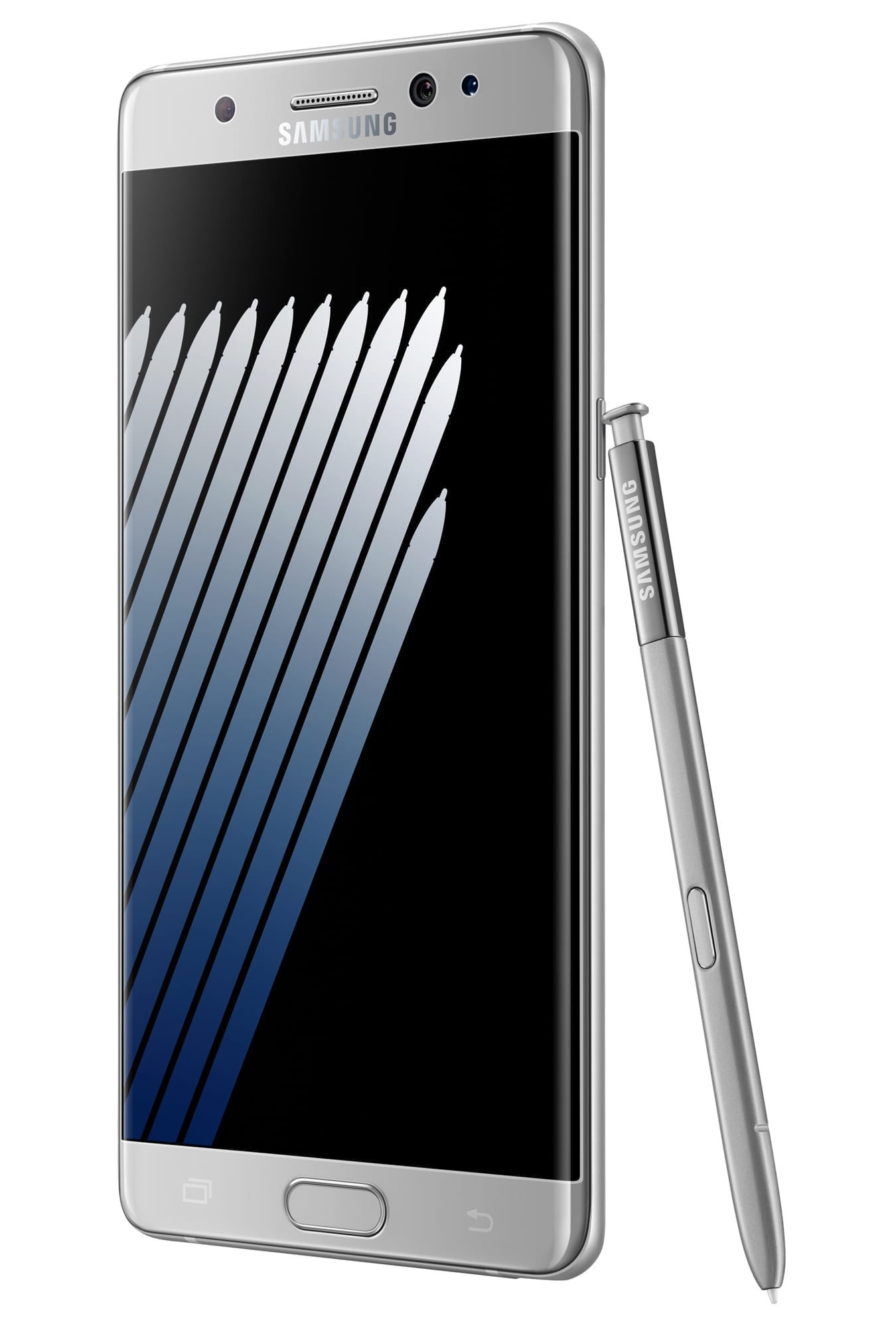 Samsung was quite open when it apologised at the launch event for not bringing the Note 5 to Europe last year, and following a petition that got over 10,000 signatures, the decision was made to bring the Note 7 here this time around.

Let’s hope all those who demanded the Note 5 now actually buy the Note 7!

The key features of the Note 7, that sets it apart from the otherwise similarly specified S7 edge, is the new improved S-Pen (with some improved apps and features) and an Iris scanner.

The Iris scanner is something I’m not entirely convinced about, but it’s there and is in addition to the existing fingerprint sensor and other security options, so if you don’t like it you don’t have to use it. 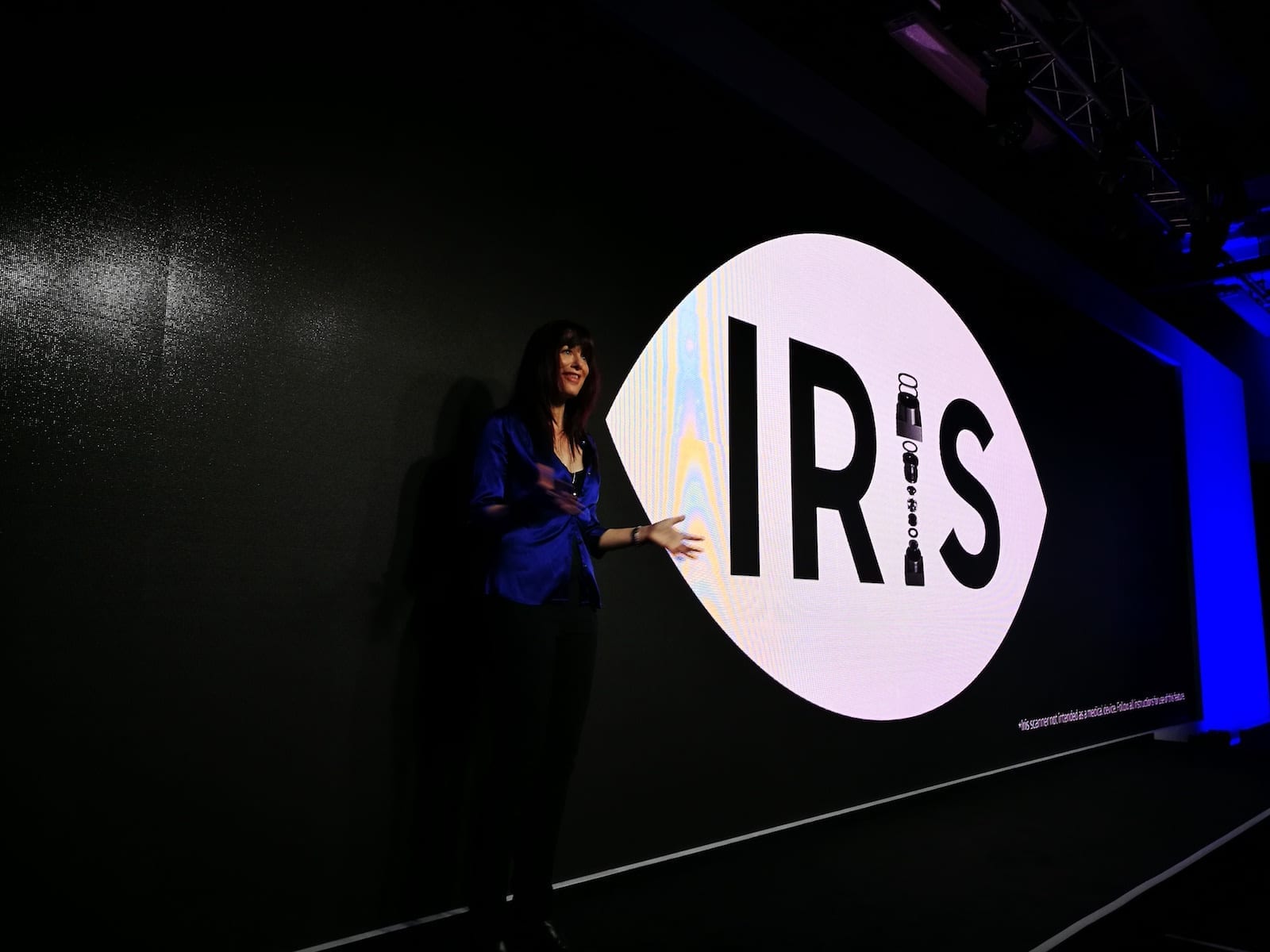 For those that do, it can unlock the phone, be used to authorised Samsung Pay payments, lock folders to keep prying eyes away from private documents, photos or videos, and in the future Samsung has grand plans for Internet of Things applications. Some of these usage scenarios may well be unveiled at IFA in Berlin next month, where Samsung is likely to show off a number of new IoT applications.

The S Pen now has a 0.7mm tip for improved accuracy and precision, and the new app to manage the pen functions now comes with a clever translation feature. Just tap on any word to get a translation to whatever language you like. It can also be used for annotating just about anything, magnifying areas of the display, and jumping from app to app.

A screen-off memo writing feature is a nice addition, making it easier than ever to take notes.

Another new feature for the Note line is IP68 water resistance, and it even extends to allowing the S Pen to be used underwater. I have absolutely no idea if this will be useful, although I can imagine it being useful for taking notes outdoors in the rain – where many phone screens will become unresponsive or go crazy as each raindrop registers as a press. 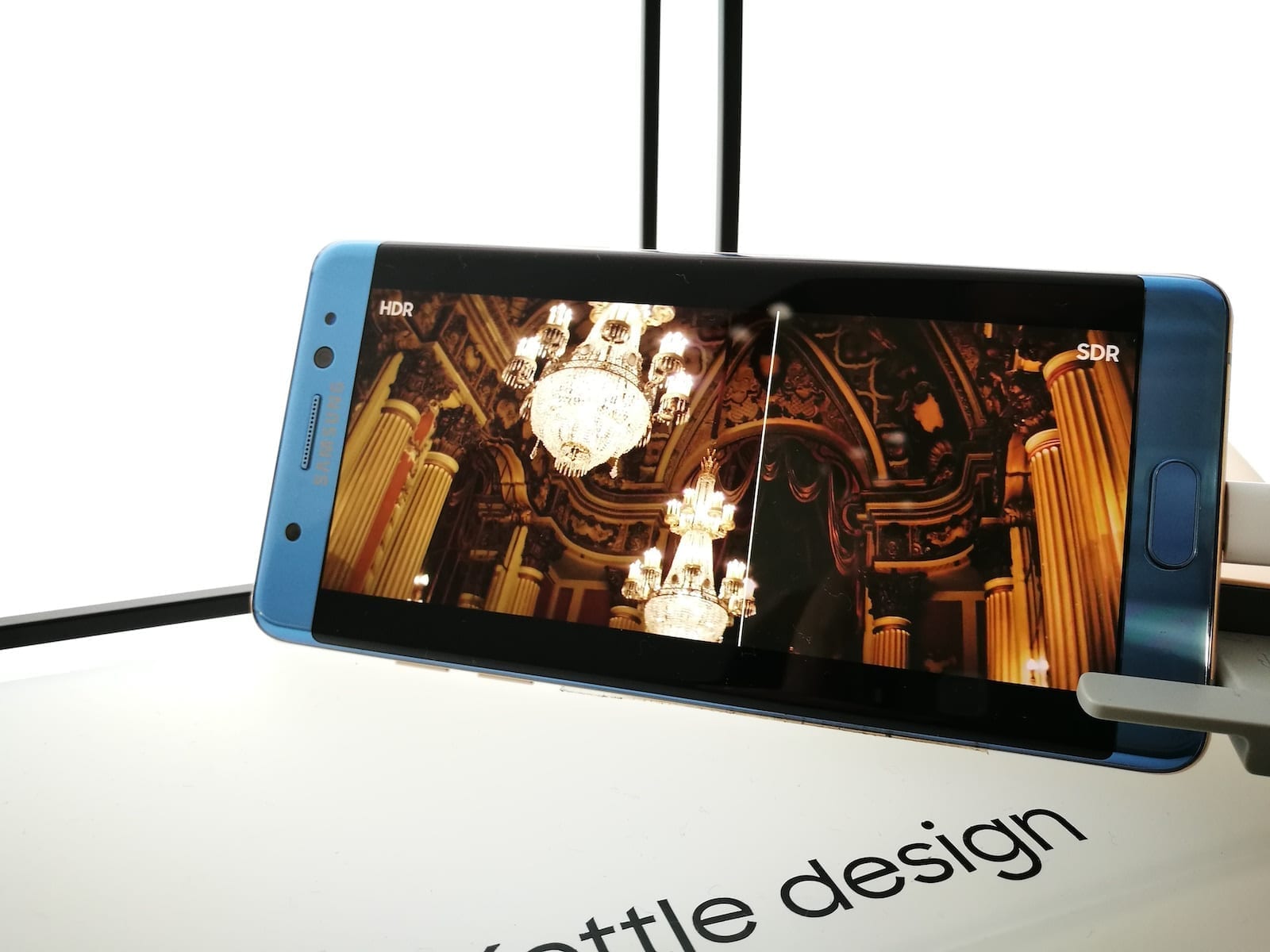 The bright 5.7-inch dual-edge Super AMOLED display (1440×2560 pixels) now has HDR support, and Samsung was keen to talk up the growing amount of HDR content being made available now and in the future. It may well be little more than a software feature, but it did look good however it’s done.

Sadly, there are no front-facing speakers, although there is an optional case that props the phone up perfectly for enjoying TV and film, while also including a window for the main screen when used as a flip-cover.

The Note 7 is also the first Samsung to go USB-C, and it retains the fast charging capabilities of previous phones, as well as keeping wireless charging support. That’s probably just as well as the battery tops out at 3,500mAh – somewhat less than the rumoured 4,000mAh battery capacity before the phone was officially unveiled.

Chipsets range from Samsung’s own Exynos SoC to Qualcomm’s Snapdragon 820. Snapdragon appears to once again be reserved for the American models, while the UK and European versions will get the Exynos chip – with Cat 9 LTE support for data speeds up to 450Mbps down, and 50Mbps up. 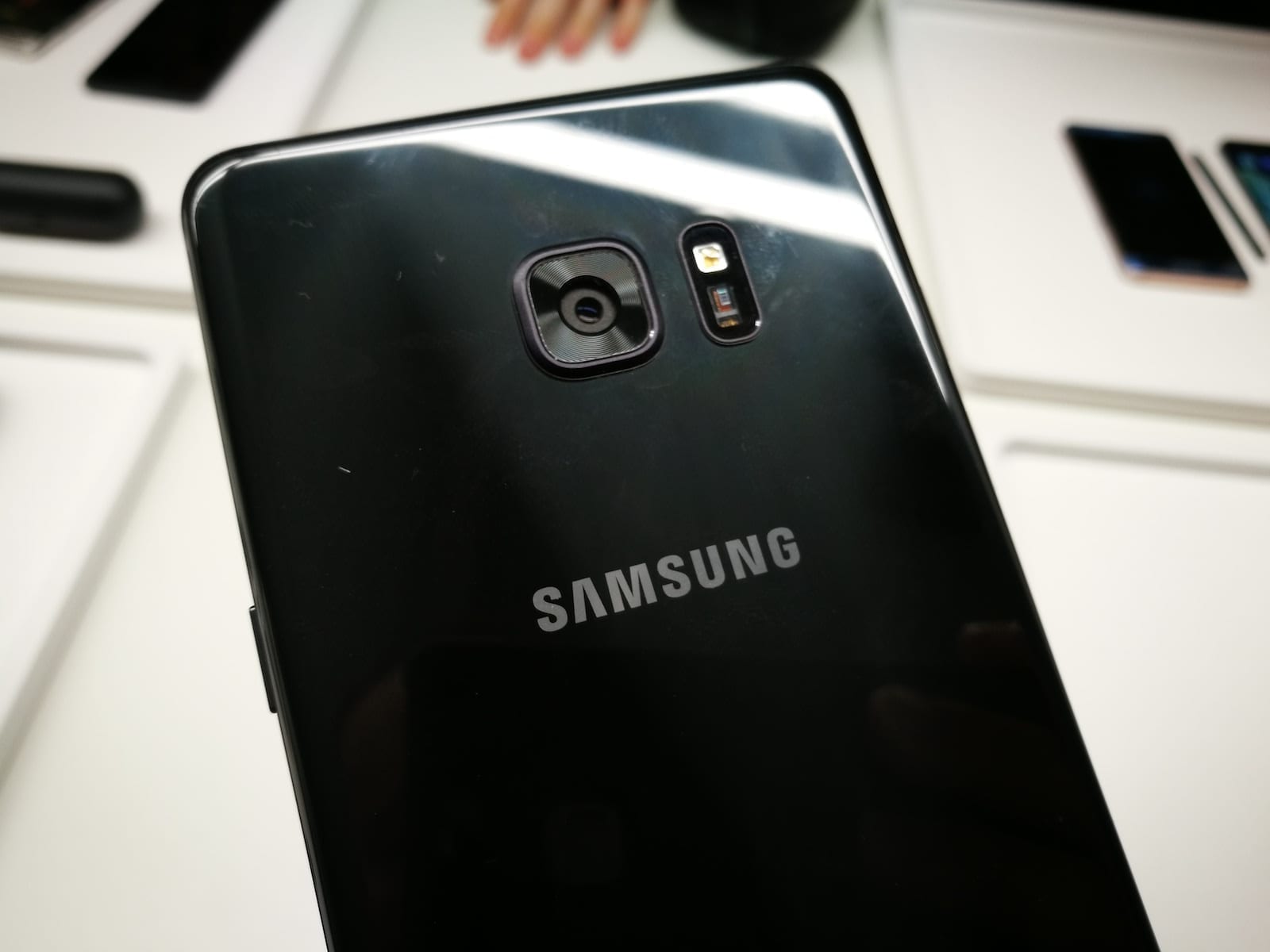 Camera wise, the Note 7 packs in the same great camera from the S7 and S7 edge. That’s a f/1.7 12-megapixel image sensor with optical image stabilisation, and a front-facing f/1.7 5-megapixel camera. Images and video should be every bit as good – so while those hoping for any sort of improvement may be disappointed, there’s little reason to worry.

The UK Note 7 comes with 64GB of fast UFS 2.0 internal storage, plus a memory card slot that can take cards up to 256GB in size (and in theory, 2TB). There’s 4GB of RAM, and I have to say that I am not unhappy about that given how little memory is generally needed to function day-to-day. 6GB on the OnePlus Three is overkill to me, and it’s good that Samsung didn’t feel compelled to play the game – at least not yet (wait and see, the Galaxy S8 will now come with 8GB of RAM or something!). 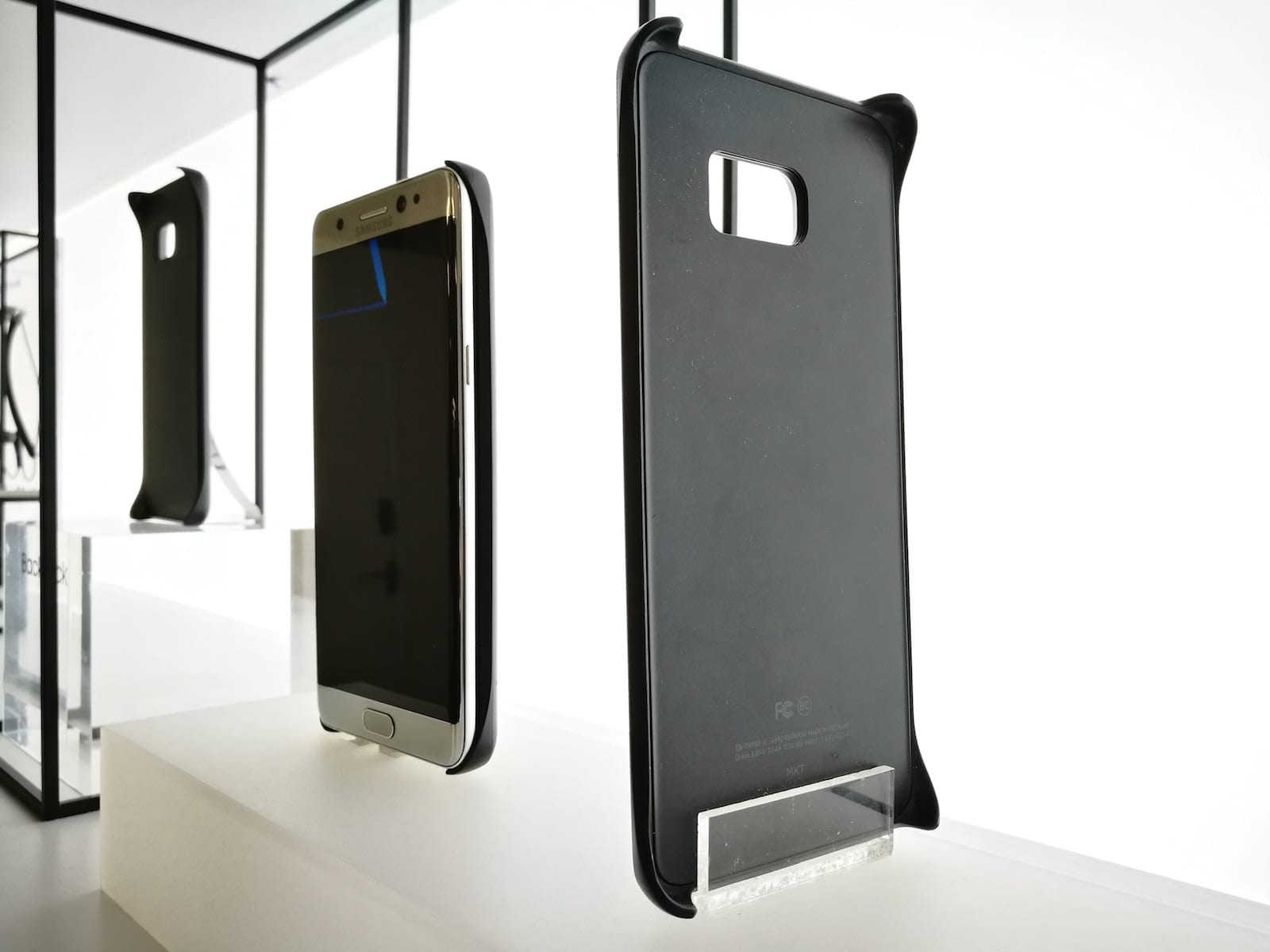 Other accessories (see below) include a range of cases, wireless charging stands, battery covers and more. There’s one thing you can’t fault Samsung for and that’s providing a large range of official and third-party accessories.

At around £700 or above, the Note 7 isn’t a cheap phone. On most networks where you pre-order (between 16th August and the on-sale date of 2nd September) you will get the new Gear VR for free, but it may be a better option to wait and see if the price falls after a month or two instead.

At the end of the day, besides the Iris sensor, the only significant difference between the Note 7 and Galaxy S7 edge is the S Pen (plus a 0.2-inch screen size difference if you wish to be picky). If you can live without the pen, you might be better off with the S7 edge instead – or even the S7 if you want even more portability.

Let me know what you think in the comments, including whether you feel the Note 7 is worth the premium over a S7 edge.

London, UK – 2nd August, 2016 – Samsung Electronics continues to drive the smartphone market with the launch of the Galaxy Note7, building on the company’s category-defining leadership with innovative features that set a new standard for large-screen devices. With state of the art craftsmanship and a unique, symmetrical edge design, the Galaxy Note7 features:

“The Galaxy Note7 combines productivity and entertainment in one single device. With strong security features and an enhanced service ecosystem, the Galaxy Note7 is the ideal smartphone for those looking for a device for work and play,” said Conor Pierce, Vice President of IT & Mobile Samsung Electronics UK & Ireland. “We created the Galaxy Note7 to reflect the way people live their lives helping everyone get things done wherever, whenever.”

The Galaxy Note7 will go on sale in the UK in Blue Coral and Black Onyx on 2nd September and customers can pre-order the device from 16th August with an additional colour skew, Silver Titanium, coming soon. Customers who pre-order before 30th August will be rewarded with a special early delivery three days before the device lands in store. A free Galaxy Gear VR will also be included in pre-order deals from selected retailers.

The enhanced Galaxy Note7 S Pen is the product of two engineering breakthroughs in the past three years with users now able to bring their ideas to life without unlocking the screen by using Screen off Memo and simply pinning the memo to the Always On Display. The S Pen also gives users the ability to easily create and share GIF animations with Smart Select. Additional new features include Air Command functions such as Magnify and Translate, letting owners zoom in on the screen or convert languages by hovering above the text with the S Pen. It is even easier to access the best of the S Pen’s creative abilities with Samsung Notes, a new unified app allowing users to jot down handwritten notes, draw, or edit memos from one location.
The new S Pen replicates the accuracy of a real pen with the updated design including a smaller 0.7mm pen tip which is water resistant so users can get the most from their device almost anywhere, whatever the weather.

Advanced security in the blink of an eye

In addition to fingerprint scanning, the Galaxy Note7 is equipped with new iris recognition technology, a highly secure biometric authentication system that can unlock the home screen. Coupled with Samsung Knox, an industry-leading security platform, the Galaxy Note7 provides a new level of security and convenience. The introduction of the Secure Folder, a separate folder that adds an extra layer of security to keep private and personal information safe, gives users additional peace of mind.

The Galaxy Note7 also supports the new Gear 360 camera, with full 3840×1920 resolution, so users can capture and share their own 360-degree videos on the go. With 64GB of internal UFS 2.0 storage, the Galaxy Note7 is perfect for those who want to capture content using the latest technology then share with friends via platforms including YouTube 360 and Facebook, or relive the moment using the Gear VR.

Designed to deliver the most seamless user experience possible, every detail of the Galaxy Note7 design has been refined to provide a comfortable grip and easy day to day use. Whilst the Galaxy Note7 features a large-screen size, it is slim and lightweight for use on the go and the unique front-to-back 3D dual-edge curve gives the Note7 the sleek feel users have come to love with the Galaxy series. The Galaxy Note7 also features Corning® Gorilla® Glass 5, for maximum durability.

The Galaxy Note7 comes equipped with the advanced camera introduced on the Galaxy S7 and Galaxy S7 edge. The dual-pixel technology, wide aperture and fast auto focus work together to make sharp and beautiful photography even in low-light environments.
In addition to 64GB of internal memory, the Galaxy Note7 offers expandable storage and microSD support up to 256GB and includes a 3,500mAh battery, easy Power Management UX through Smart Manager, and has a USB Type-C port.

The Galaxy Note7 is designed to plug seamlessly into Samsung’s ecosystem of devices, software and services. Users can monitor their fitness activities on the Gear Fit2 or Gear IconX and track their data through S Health 5.0.** In addition to accurate fitness tracking and measurement, the new S Health lets owners share fitness updates with their loved ones. All health information is encrypted and protected with Samsung Knox.

The Smart Switch feature has been enhanced with Samsung Cloud, which supports a seamless device experience by providing continuous backup and easy transfer of content including data and apps.

Galaxy Note7 users will be able to use up to 15GB of free space to store and restore information on Samsung Cloud.