Set up by a New York Cabbie, PNY has grown over the years to become a respected firm responsible for a selling a great range of mobile accessories.

I was invited to meet with them last week to see their latest portfolio of products, as well as get an overview of all their existing products, from chargers, USB-C hubs, lens kits and flash storage solutions.

2017 is the year USB-C has really begun to take off, so it’s no surprise that PNY has released, or will soon release, a number of products to take advantage of the latest USB standard.

There’s also lots of legacy kit that retains micro-USB connectivity, but given there are still millions of devices out there using the older USB connector, it’s not yet time to call time on all of these.

PNY also has a number of solutions for iPhone users.

With higher demand than ever before on the latest smartphones, like recording Ultra-HD resolution video at varying frame rates, or taking burst photos, PNY’s microSDXC cards offer read speeds of up to 100MB/s and write speeds of 90MB/s – which will be limited only by the speed supported by the devices they’re used in.

PNY also offer SD memory cards and USB flash drives with large storage and fast read/write speeds (up to 400MB/s with the PRO Elite products), as well as a DUO Link cable (pictured above) that combines a USB flash drive with Apple Lightning adapter – in capacities from 32-128GB (£45.99-£94.99). 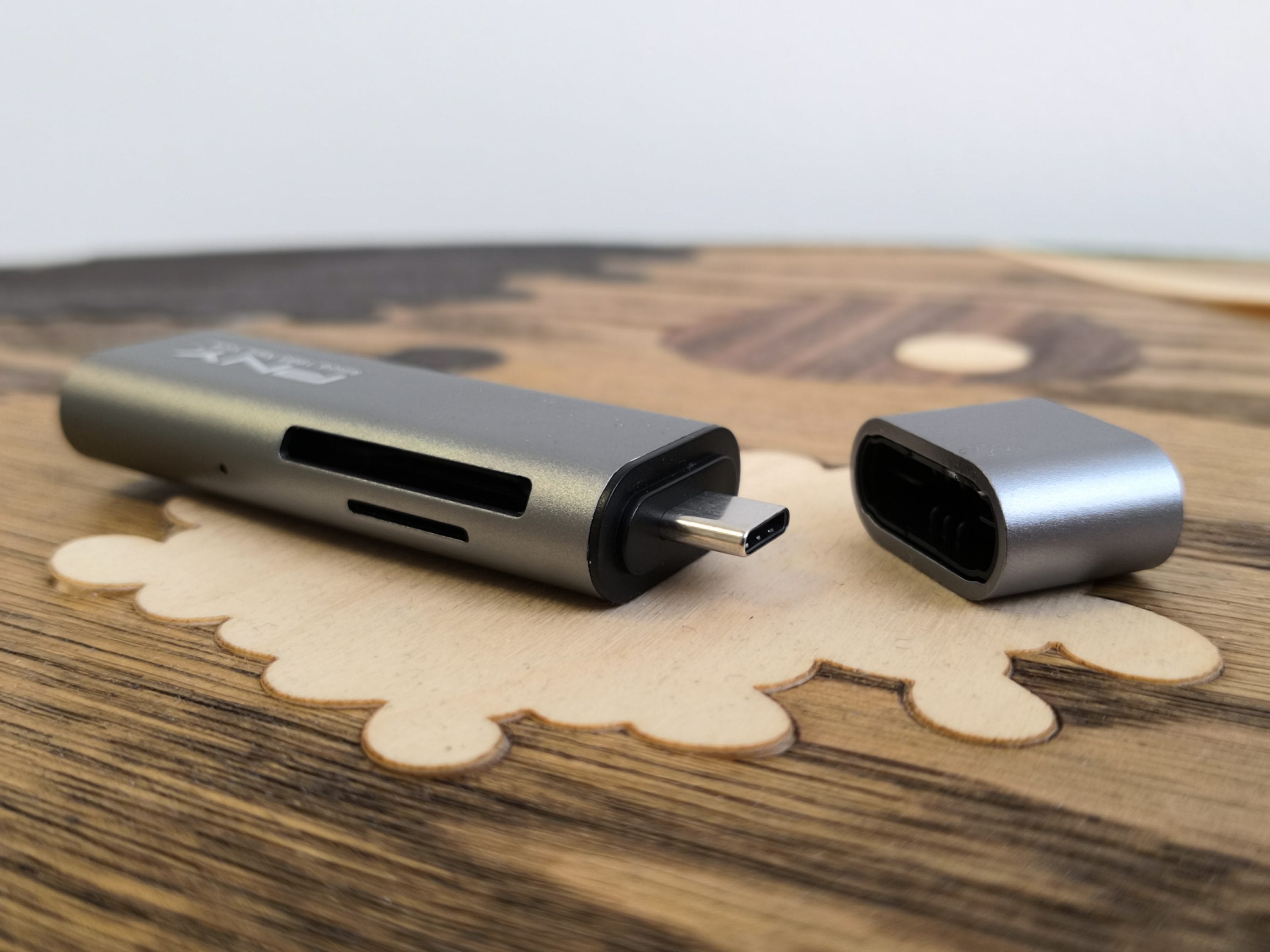 A USB-C card reader is another product (see above), as well as adapters to convert USB-C to USB-A and a hub (pictured below, £44.99) that takes a single USB-C port and splits it into an HDMI output, USB-A port and a USB-C port to allow for charging. 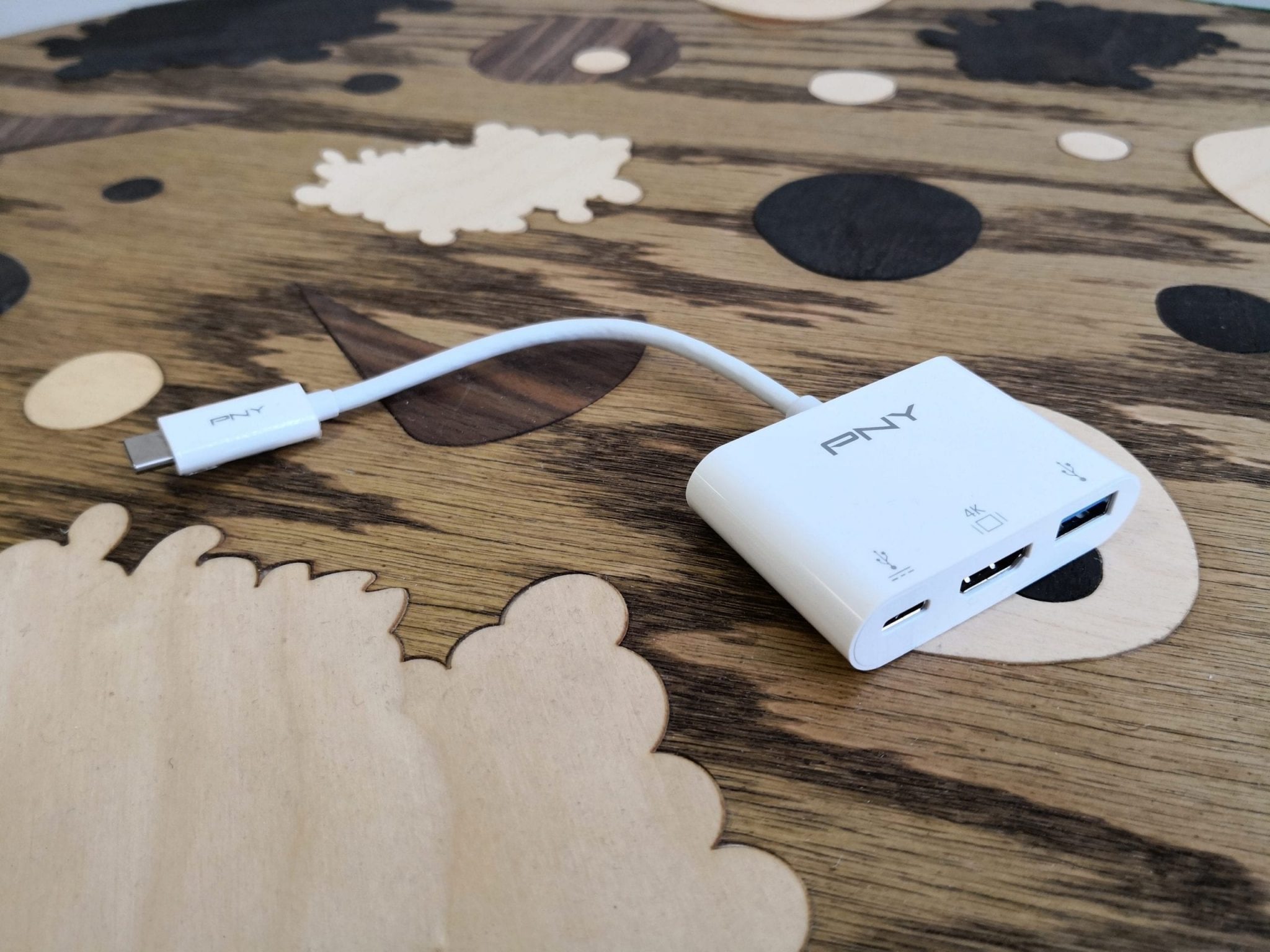 There’s a lens kit with four individual lenses to clip on to your smartphone, offering a selection of features including a macro mode, with free access to Fotor software for post-processing your images (Android and iOS).

The kit has been on sale for some time, and obviously won’t work for dual-camera phones, but if you want more from your single-lens phone, the kit can be purchased for £35.90 and offers a great deal of photographic opportunities.

A new product that will go on sale by the end of November is the Family car charger (£22.99), designed to power multiple devices, now that everyone in a car – of almost all ages – likely needs a source of power for their phone or gadget.

You may even need more than one of these, but this is little problem in many modern vehicles that have two or three sockets in various locations. Plus, the relatively low cost makes it more feasible to actually buy more than one.

With the kit, you gey a single 5V/1A USB-A port on the adapter itself, for charging a phone or powering a satnav or dashcam, and a 1.8 metre cable that leads to three further USB-A ports with an uprated 2.4A output.

A clip on case is also supplied, although as this was a prototype it wasn’t clear how that will work, such as whether there will be other items in the box to facilitate the attachment to items in your car (like adhesive/velcro pads or a strap to go around a seat etc).

If my car is anything to go by, you’ll probably figure out your own way to rig everything up to make things as tidy as possible. 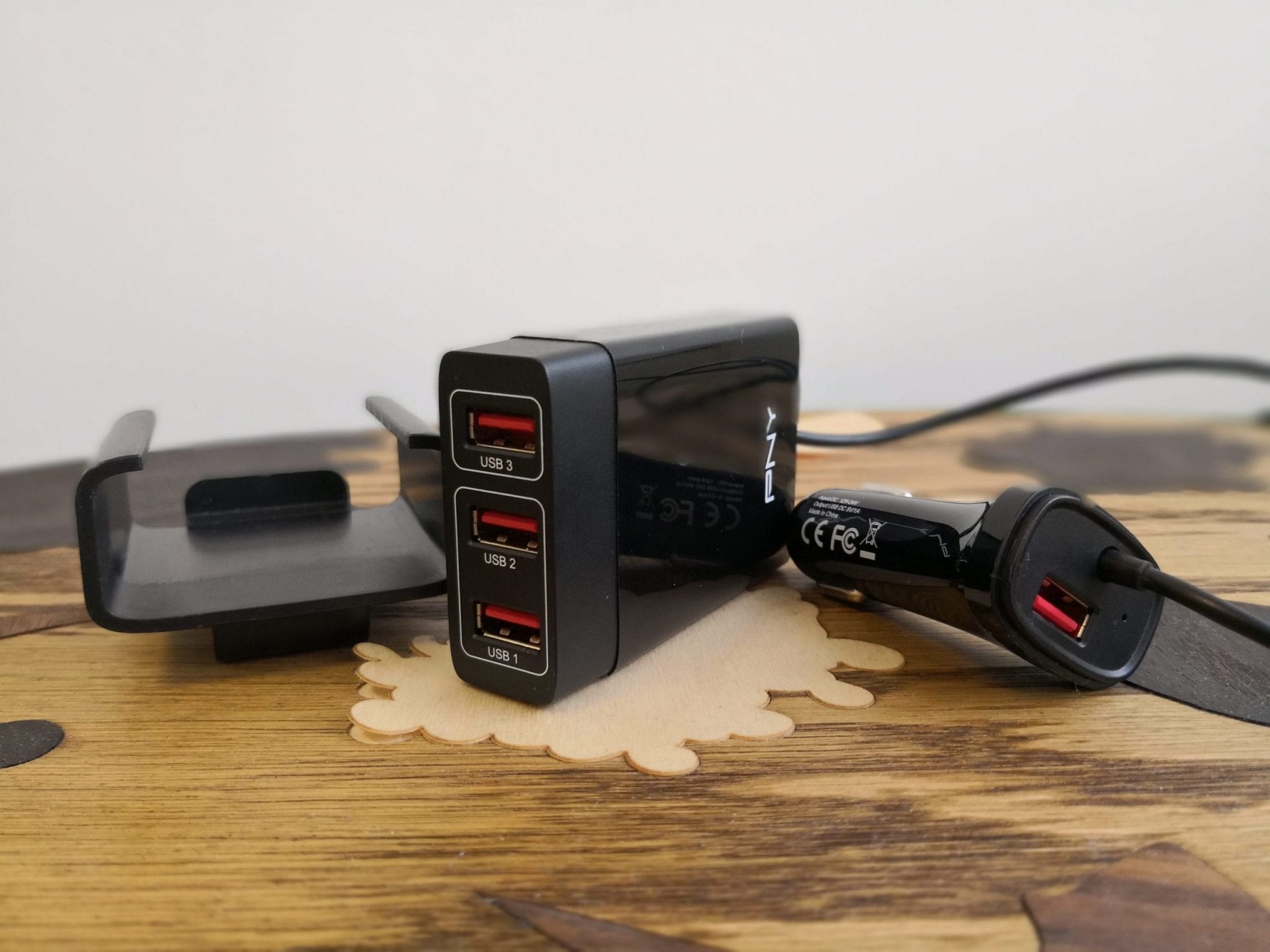 PNY also has a simple Qualcomm Quick Charge 3 car adapter on offer, and is investigating other fast charging systems – including…

USB-PD (Power Delivery) is one of many standards competing to become THE de facto standard for fast charging, and I’d actually quite like for this to be the case.

It seems the industry is already preparing for it to succeed, with the Huawei Mate 10 Pro (review coming soon!) supporting not only Huawei’s own SuperCharge system but also fast charging when detecting any USB-PD power supply, such as that for a Nintendo Switch or MacBook Pro.

Google is also a firm believer in USB-PD, meaning many Chromebooks support it, as well as Google’s own Pixel phones.

PNY has its own 72W wall charger power supply (£22.99) that delivers USB-PD fast charging via a USB-C port, as well as a further three traditional USB-A ports with a more simple 5V/2.4A output.

An older power bank from PNY’s range is still worthy of a mention, given its ruggedised, water resistant, nature. I’ve tested such products in the past, but none have ever come with as powerful a torch as this.

It’s good enough that you might be excused for simply buying this for the torch aspect, with recharging a phone or tablet merely for occasional use.

The USB port outputs at 5V/2.1A and is of an older design, so it still uses a micro-USB connector for charging, but as the battery capacity is 7800mAh, it’s pretty good for taking when in the great outdoors, and the torch should keep the torch going for ages!

For a more traditional power bank, PNY offer a range of solutions (including a very thin 2500mAh battery that can slip into a wallet), such as its slimline 10,000mAh battery pack (pictured below, £35.99).

It’s a neat offering that can slip into a bag, and is of a construction that won’t damage any devices you place it next to. Again, it uses a micro-USB port for recharging. 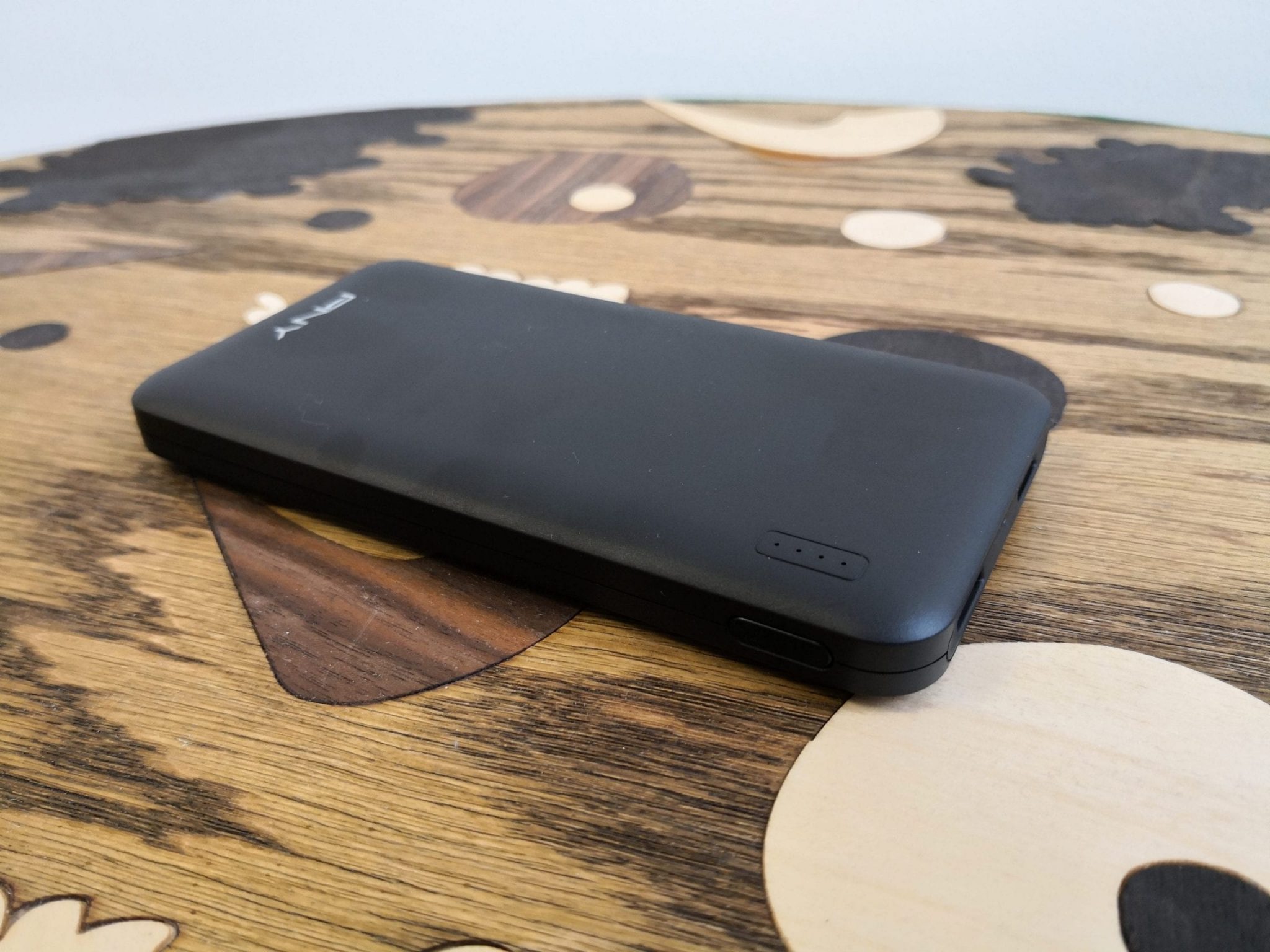 Wireless charging is now back in fashion thanks to Apple, and PNY offers a solution of its own.

Supporting the Qi standard, it’s obviously not just limited to iPhone users, and the £35.99 base will feel just as comfortable powering a Galaxy Note 8 or any of the other phones supporting Qi wireless charging.

Apple’s adoption of the Qi standard should also guarantee its future success and more phones getting support when released in 2018.

It’s doubtful many people put much thought into what cable they use when charging a phone, or connecting to a PC. If you want a spare cable, you may well think it’s fine to just buy any cheap cable.

In many cases you won’t have any actual problems (although we must remember early on there were cases of dodgy USB-C cables potentially doing harm to devices), but while you may not damage your phone, you may be losing out on the fastest charging capabilities simply due to the use of less strands of wire inside.

Unlike the shady business practices of the A/V industry trying to sell overpriced audio and video leads, when it comes to a cable to charge your phone, there really is a difference between a cheap, thin, cable and a better constructed version. 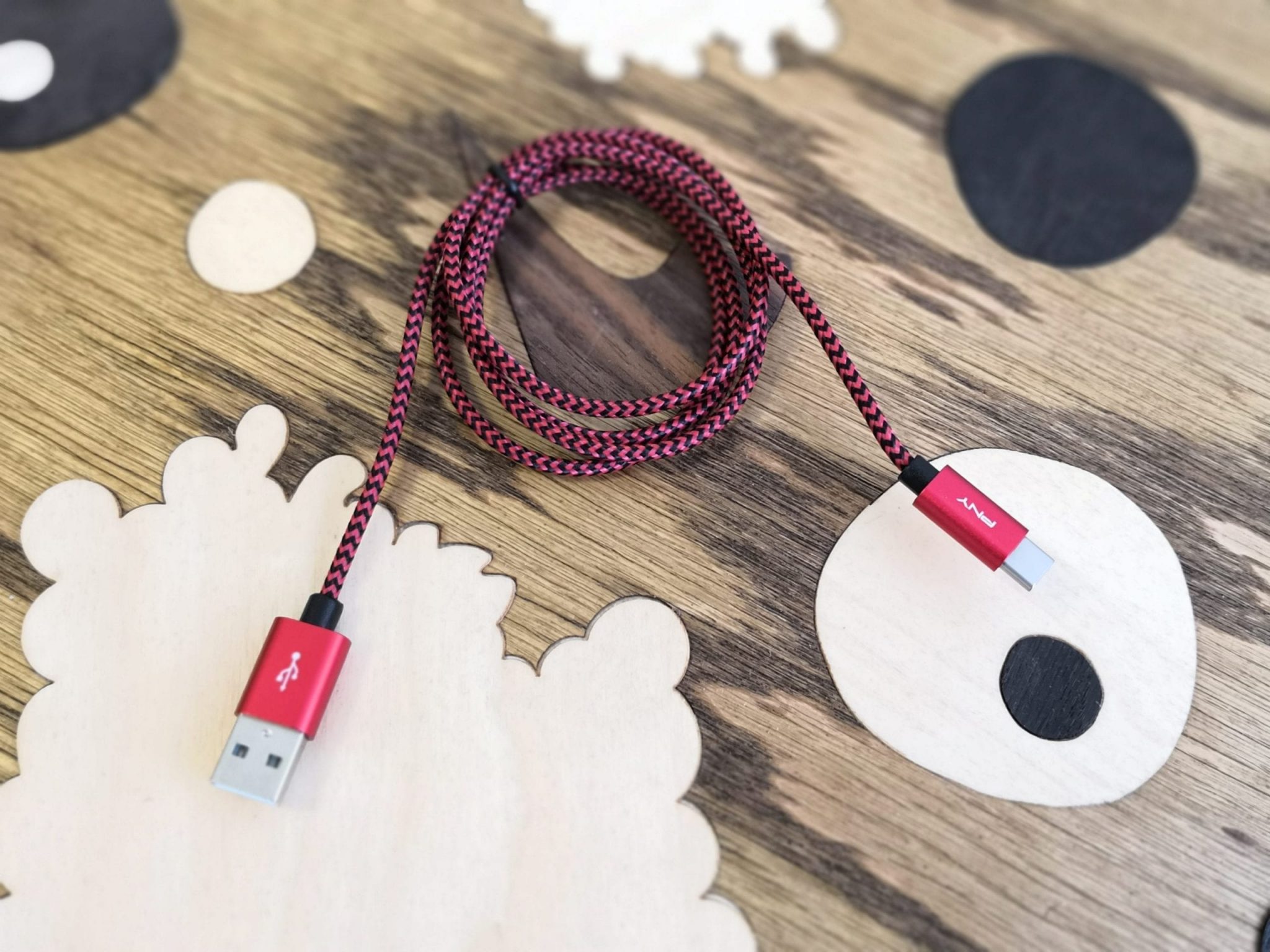 Another consideration is the quality of the connectors. To avoid damage to hardware, a cable connector is designed to fail in preference to the socket on the phone, but it doesn’t mean you want it to fall to bits after a few months.

I was particularly impressed with PNY’s metallic and braided cables, which also have the benefit of not getting tangled up easily.

Such cables will set you back around £18, which may be quite a bit more than what you can find on eBay or Amazon, but if can reduce energy losses and get your phone charged up quicker than it’s quite likely a price worth paying.

Now that I’ve run through some of the products available from PNY, you may be wondering how you can actually buy – or check out – the products for yourself.

In fact, PNY has its foot in the door of many high-street retailers, as well as Amazon. That includes Carphone Warehouse, Currys and PC World (basically any company that’s owned by Dixons), plus a limited selection of products in WH Smith.

PNY doesn’t specifically promote its products on Amazon, meaning doing searches will invariably return cheaper products from other firms ahead of its own. Some of these brands, like Anker, are respectable, but to avoid being caught out by some potentially suspect products, it’s worth adding PNY to your searches to get a proper look at what’s on offer.