As flagship phones get increasingly expensive, there’s an ever-growing market in the mid-range for affordable, but still well-performing, smartphones.

Today Nokia launched the Nokia 7.1, a sub-£300 (£299) Android phone that offers an affordable phone with a large 5.84-inch HDR display, an enhanced dual-camera set up with Zeiss optics, a revised design language, plus the bonus of Android One – promising a vanilla Android experience free of bloat, with the promise of software support for at least two years, and a further year of security updates.

Nokia is also going to push this hard in markets all around the world, so has high hopes for this being the big seller in its handset portfolio. 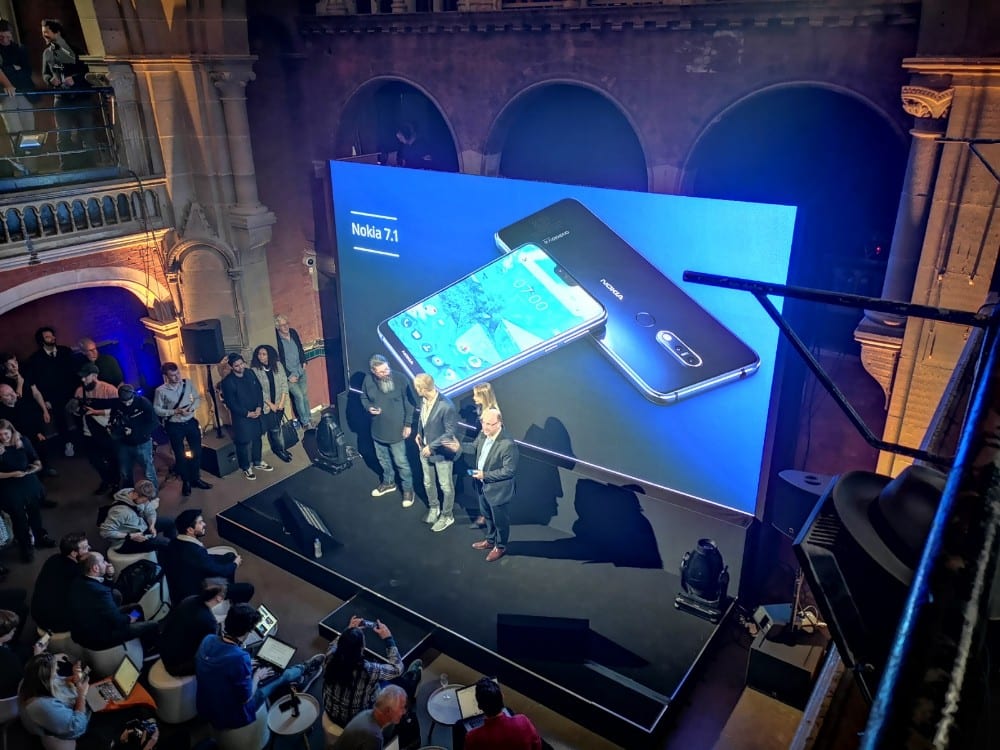 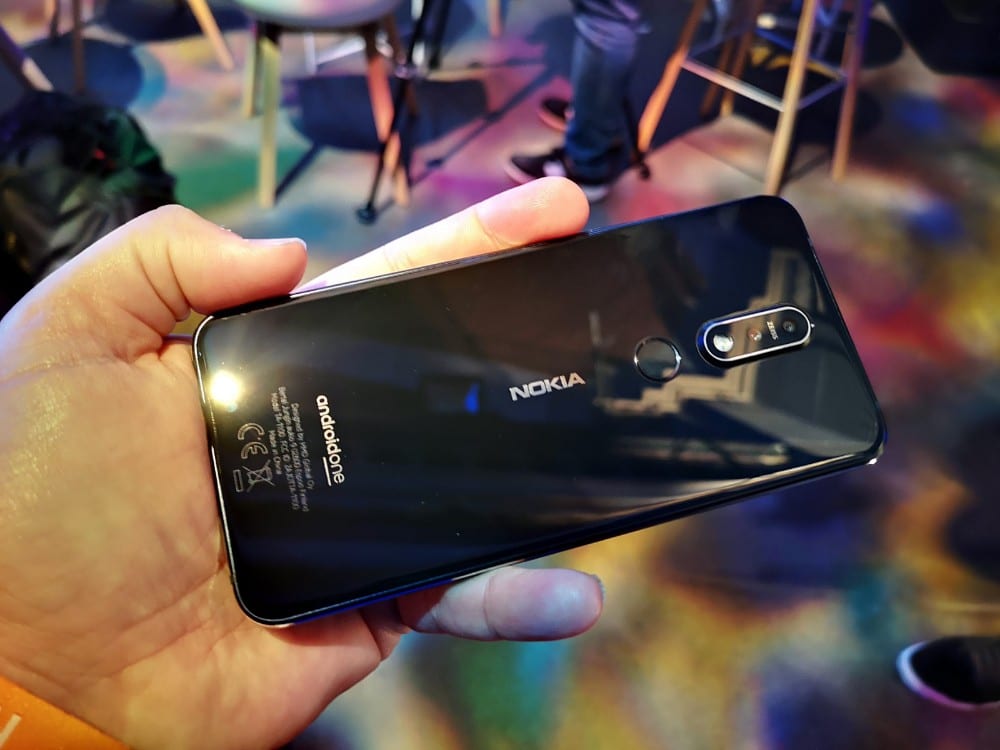 The display uses what Nokia is calling PureDisplay technology, which adjusts the colour tone to suit ambient lighting, promises an extra bright mode for using the phone in sunlight, and will also convert SDR images to HDR in real-time. The display has a 1,000,000:1 dynamic contrast ratio and a 19:9 ratio.

The phone I had to test came with a number of video clips that looked fantastic on the screen, and Nokia has confirmed support for HDR content on Amazon Prime Video and Netflix.

A notch is pretty commonplace for a 2018 phone, but given the use of Android One and the heavy influence from Google, it seems the popular option to ‘hide’ the notch by blacking out the surrounding edges is missing here. At least I couldn’t find it in the display settings menu when I looked. 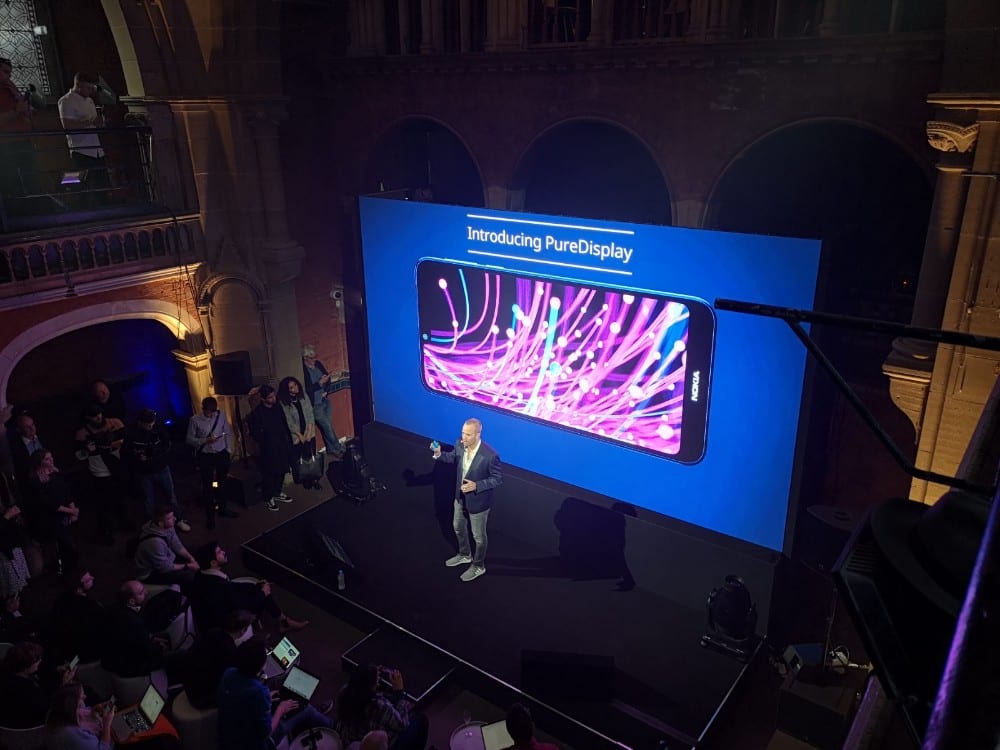 On the hardware side, the Nokia 7.1 is powered by Qualcomm’s Snapdragon 636 processor, which promises to be one of the most frugal yet, the Nokia 7.1 should offer a decent user experience combined with excellent battery life from the 3,060mAh battery. The phone also has a rear-mounted fingerprint sensor, and there’s also a 3.5mm headphone jack!

Connectivity wise, there’s dual-band Wi-Fi with 802.11ac support, Cat 6 LTE for speeds of up to 300Mbps down and 50Mbps up, Bluetooth 5.0 and 3 or 4GB of RAM depending on the market (it wasn’t stated what version will be available in the UK, although some sites suggest we’ll get the 3GB model). There’s a memory card slot to accompany the 32 or 64GB of internal memory (again, the storage available depends on what market/network the phone is sold on). 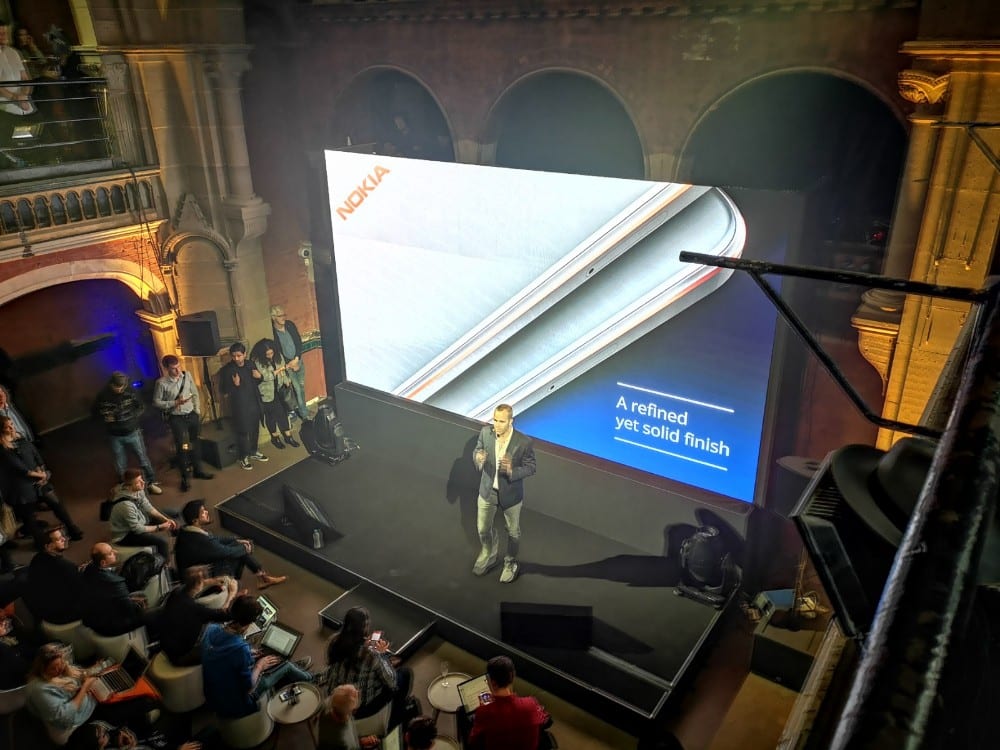 In my 45 minute play with a device at Nokia’s launch event, I obviously couldn’t test much, if any, of these things out.

I was able to take some sample photos indoors, but sadly nobody was allowed to venture outdoors to take pictures in daylight. Therefore the real testing will have to wait until review samples are made available. 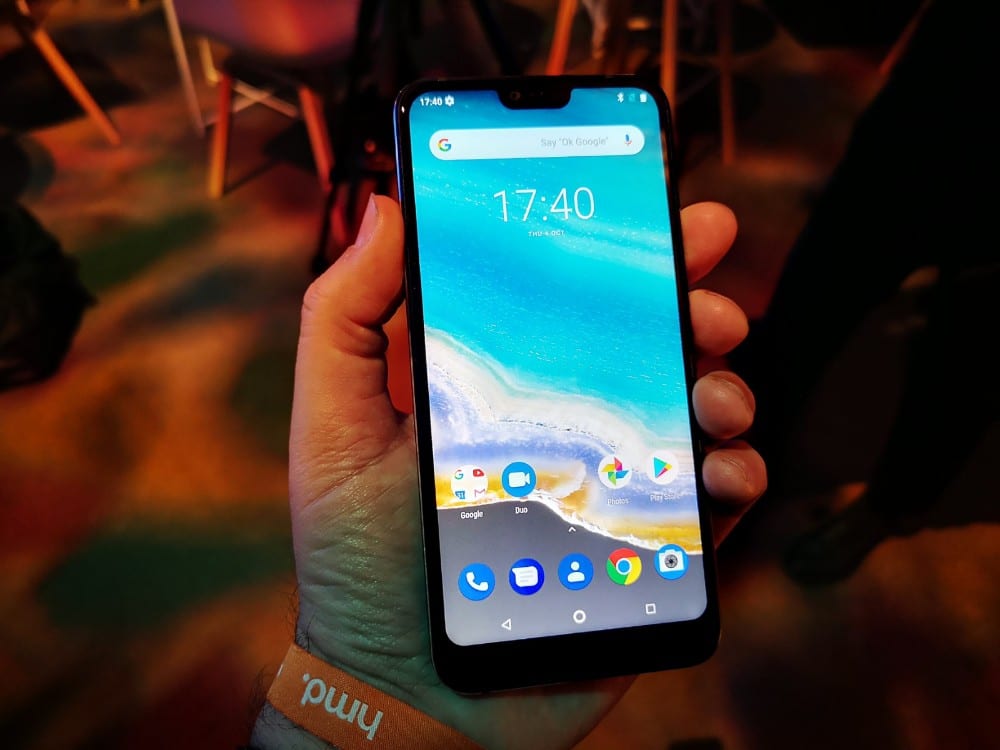 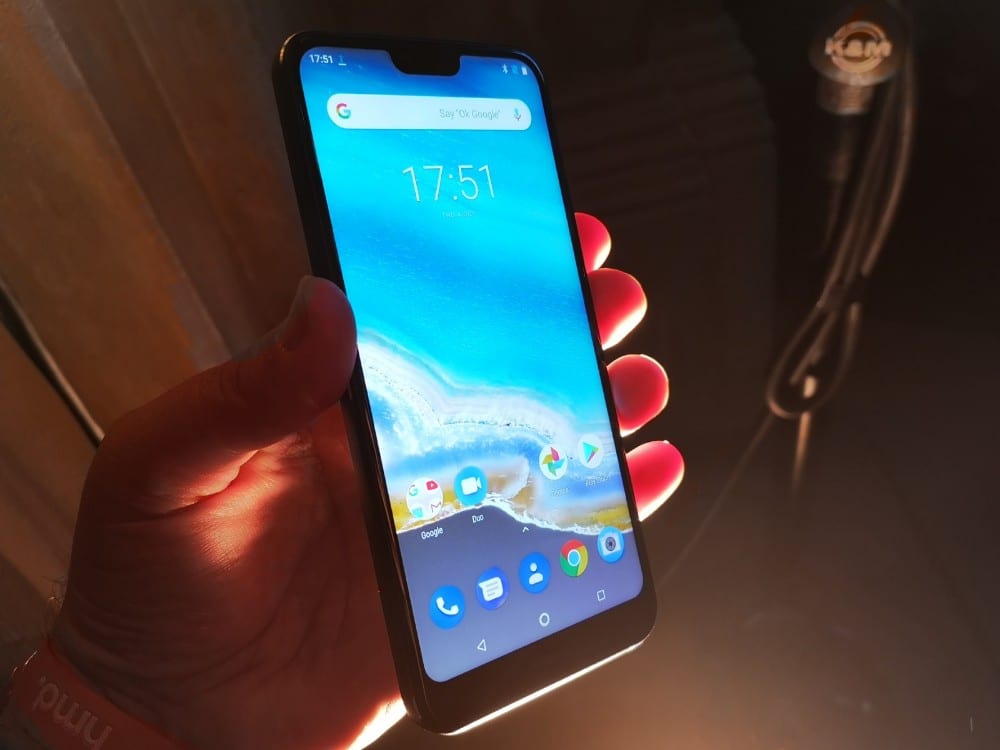 Nokia’s excuse for restricting access was down to non-final software, which perhaps explained a few force-quit issues with the camera.

Available in two colours, Gloss Midnight Blue and Gloss Steel, the Nokia 7.1 will ship from October 17th (in the UK) with Android Oreo installed, but Android Pie will follow soon after and introduce new features such as the Adaptive battery feature that intelligently closes down tasks that aren’t needed, and predicts when to start things up for when they are. 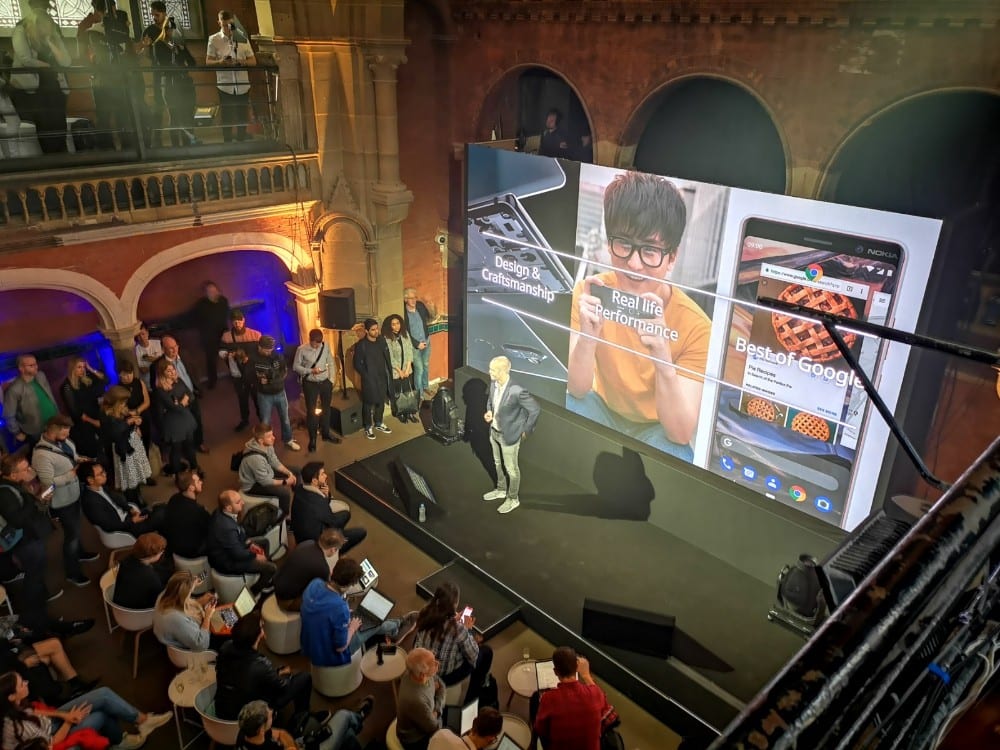 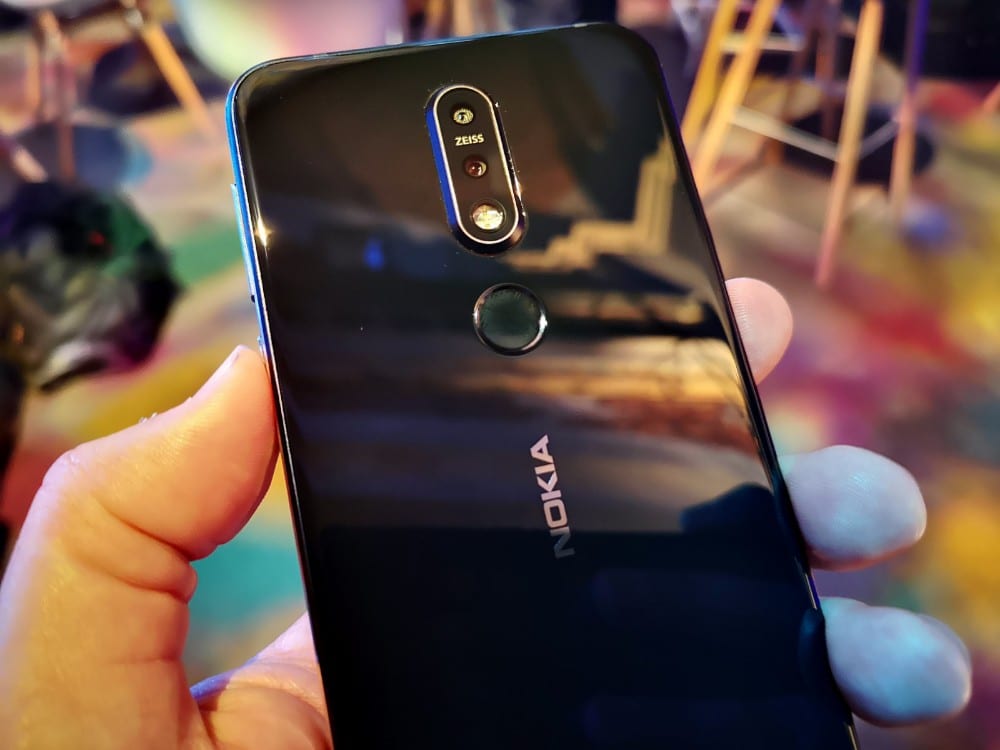 On the camera side, there’s a 12-megapixel camera (f/1.8) paired with a 5-megapixel sensor (f/2.4) that’s designed for measuring depth, and assisting with bokeh effects. You can also use Nokia’s unique ‘bothie’ feature to take a split screen image made from using the front (8-megapixel) and rear camera simultaneously.

Video recording goes up to 4K in resolution, with a slow-motion mode available too.

There are also some new AI functions to detect scenes and improve imaging, but for the most part the selling point of the Nokia 7.1 is the fact that it isn’t heavily customised. Besides the enhancements for the HDR display and the unique Nokia camera interface, the phone ships bloat-free with only the bare minimum Google apps installed out of the box.

For many that’s going to be worth the money in itself, while for others the excellent build quality and the restored reputation for Nokia’s brand should guarantee a high level of success for this phone. It’s perhaps a shame that UK consumers will only be able to get the phone from Carphone Warehouse or Vodafone, for now at least.

Not being able to step outside rather limited my photo opportunities, but here are a few photos I managed to take at the launch venue. I dabbled with some 4K video and slow motion clips, but with the only way to transfer the footage being a Bluetooth connection to my phone, I would have likely still been there now waiting.

The earbuds weigh 5g per earbud, with up to 3.5 hours of play time and a pocketable charging case (capable of charging three times), while the earphones offer 10 hours play time, and are turned on by releasing the magnetic earbuds from each other.

Nokia hinted that when pre-ordering opens today, there could be some accessory bundles to look forward to.

2 thoughts on “Nokia aims to shake up the midrange market with the high-performing Nokia 7.1”