It doesn’t seem like very long ago that released the Honor Play, the first ‘gaming-centric’ phone from a company targeting ‘brave’ digital natives.

It ticked all the right boxes for a respectable £279 retail price, but that hasn’t stopped Honor releasing an even bigger screened device, but with a slightly lower spec chipset, for the incredible price of £229.99.

The Honor 8X is the successor, funnily enough, to last year’s Honor 7X. This was another large-screen phone that introduced the taller ‘FHD+’ 18:9 ratio display, reducing bezel size and bringing higher-end features to a more affordable phone. 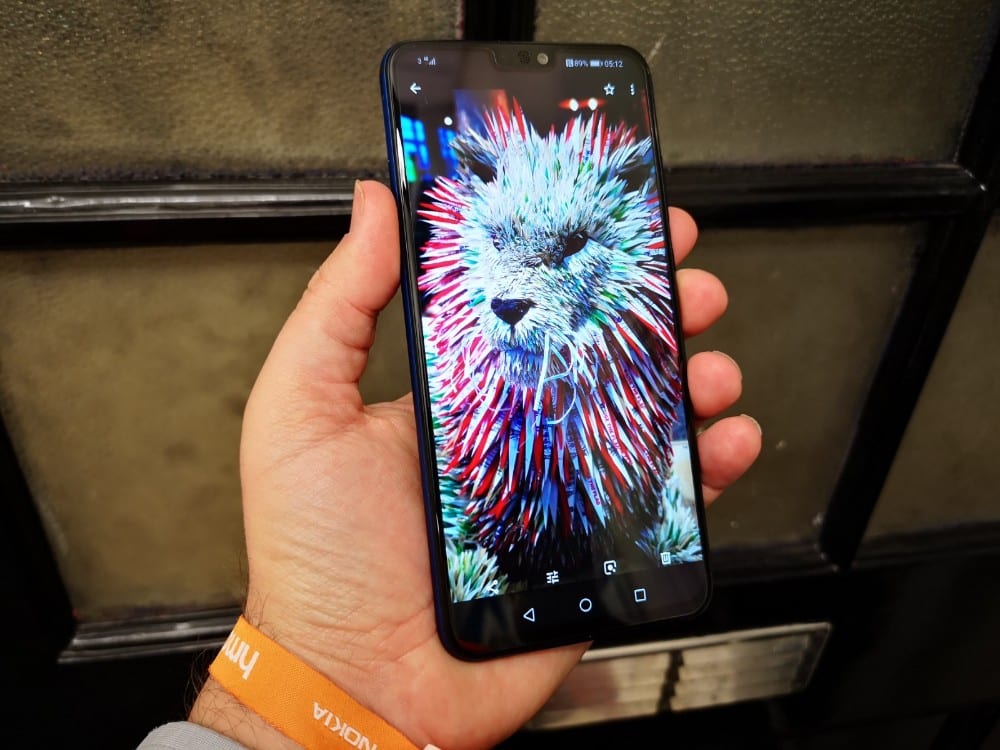 Going big is exactly what Honor has gone for again, this time with a near bezel-less 6.5-inch LCD display (with the obligatory notch) that’s nothing short of spectacular. With a rear-mounted fingerprint sensor, virtually the entire front of the phone is display so there’s no chunky chin either.

There’s no HDR support on this display, such as you’ll find on the recently announced Nokia 7.1 but it still looks fantastic – with a resolution of 1080 x 2340 pixels that comes in just short of 400PPI.

It truly is a marvel of engineering for something that is a fraction of the price of, say, the iPhone XS Max but with the same-sized screen.

Let’s not pretend the Honor 8X is directly comparable to the iPhone XS Max, but it still offers a lot for the money. It comes with a decent 3,750mAh battery, a dual-camera setup, dual-band Wi-Fi with 802.11ac support, NFC with Google Pay support, 4GB of RAM and 64GB of storage.

Unlike the iPhone, or pretty much any dual-SIM phone on the market, the Honor 8X comes with a three slot tray to allow two nano SIM cards and a microSDXC card, so there’s no need to choose between adding a further 512GB of storage or a second SIM. You can have your cake and eat it here.

It has always confused (and annoyed) me that only the cheaper phones in Honor’s portfolio have come with this configuration. Sure, the longer tray takes up more room inside – but it’s always frustrating to have to choose between a second SIM or memory expansion, especially on a more expensive phone that you’d normally expect to do things a cheaper models doesn’t. 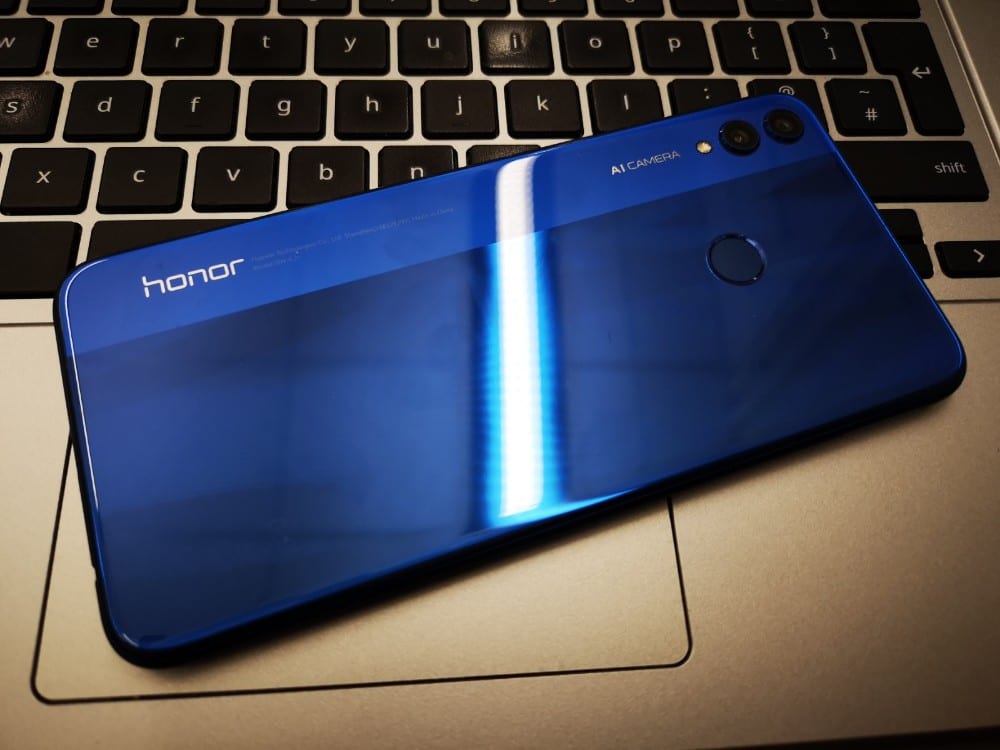 The Kirin 710 SoC is Huawei’s latest mid-range chipset, also powering the £379 Huawei Mate 20 Lite, and it’s no slouch. It’s also very frugal, meaning that with the large battery the phone delivers on its promise to provide good battery performance – even with the extra large display.

On the camera side, there’s no Honor 10 style dual-camera with a RGB and B&W sensor here, but rather a 20-megapixel primary camera (f/1.8) and a second 2-megapixel sensor that is there purely for depth measurement, to aid portrait photos and create fashionable bokeh effects.

On the front is a single 16-megapixel camera (f/2.0) and on top of all that are a range of AI features for scene detection (changing the camera settings for different modes on-the-fly) and fun effects for selfie fans. 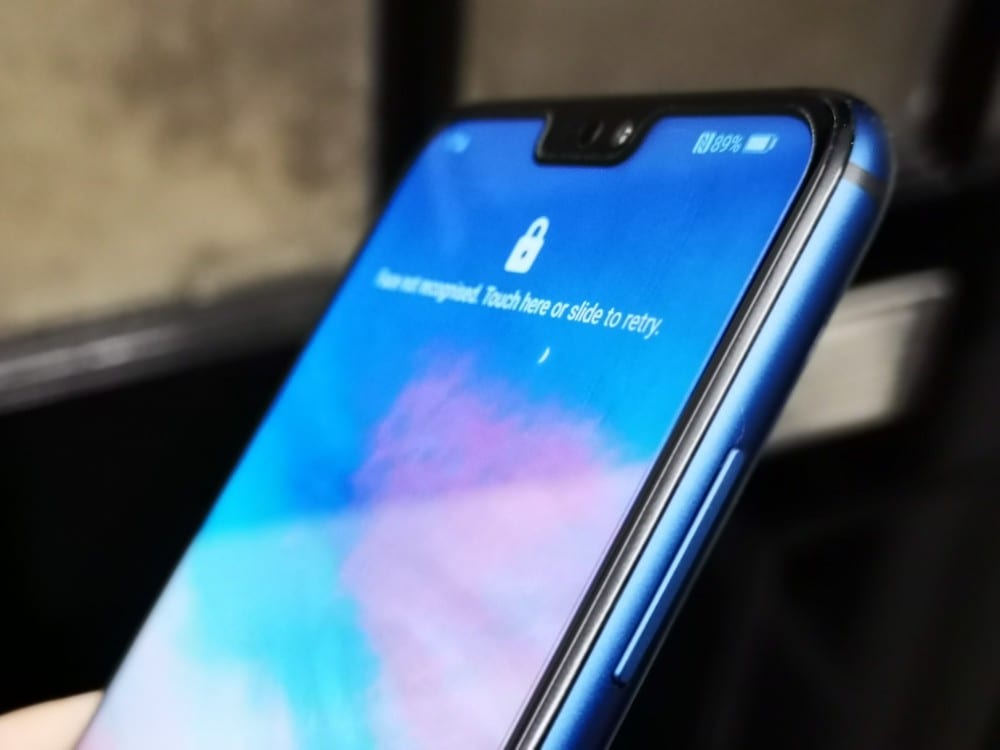 As you’ll see from the photos below, the camera is not top-of-the-line and perhaps nobody should expect it to be given the price point for this phone.

It’s not a large-screened Honor 10 (before the end of the year we may see something like this, akin to last year’s View 10 – watch this space) and so there are deliberate compromises here as part of a clear strategy of creating models for carefully defined segments.

This phone is about the screen and the ability to get the best multimedia experience. There is no pseudo-stereo mode when you turn the phone into landscape mode, and there’s even a micro USB charging port (which caused me somewhat of a shock when I first unboxed the phone).

Cost cutting is evident, but never so much that you’ll feel shortchanged because the things that really matter are where the money was invested. 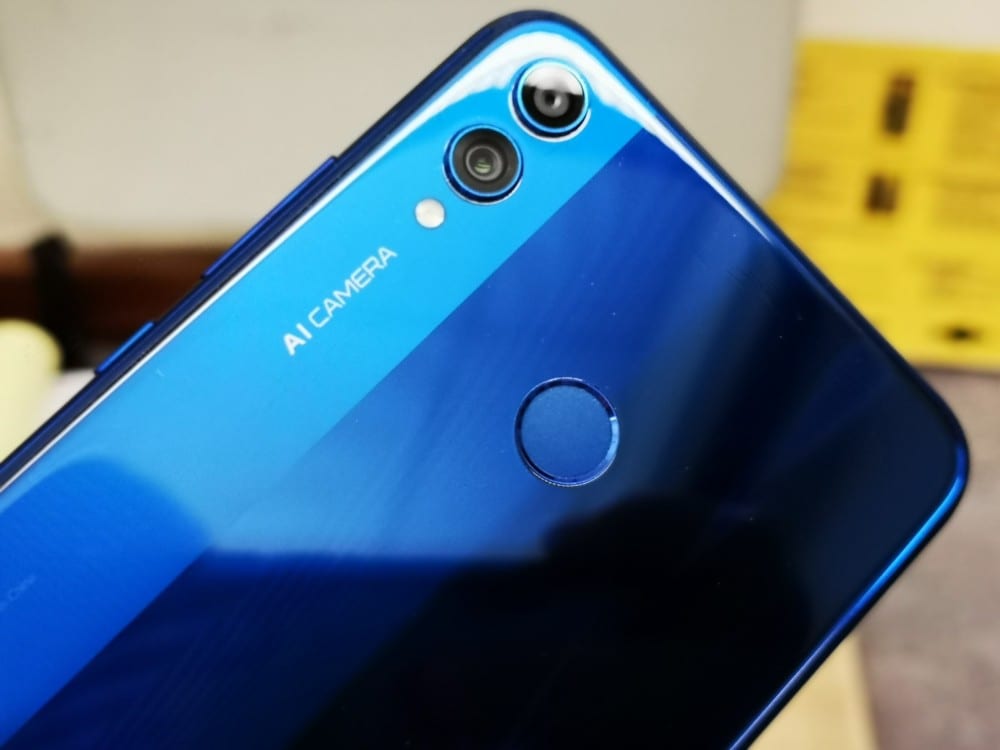 A look at the build quality, including the gorgeous reflective glass on the rear (Honor constantly comes up trumps in the design and build department), will likely have people question whether it’s the new iPhone.

Whether you play along, or inform people how much you really paid for something that looks like a £1100 phone, is entirely up to you.

The giveaway might perhaps be the inclusion of a 3.5mm headphone jack, which is one thing the Apple certainly lacks and something that Honor seems keen to retain – although whether this will carry on into next year remains to be seen.

Such ports must surely be on borrowed time these days, although some companies have slowly realised that retaining the socket is a unique selling point. 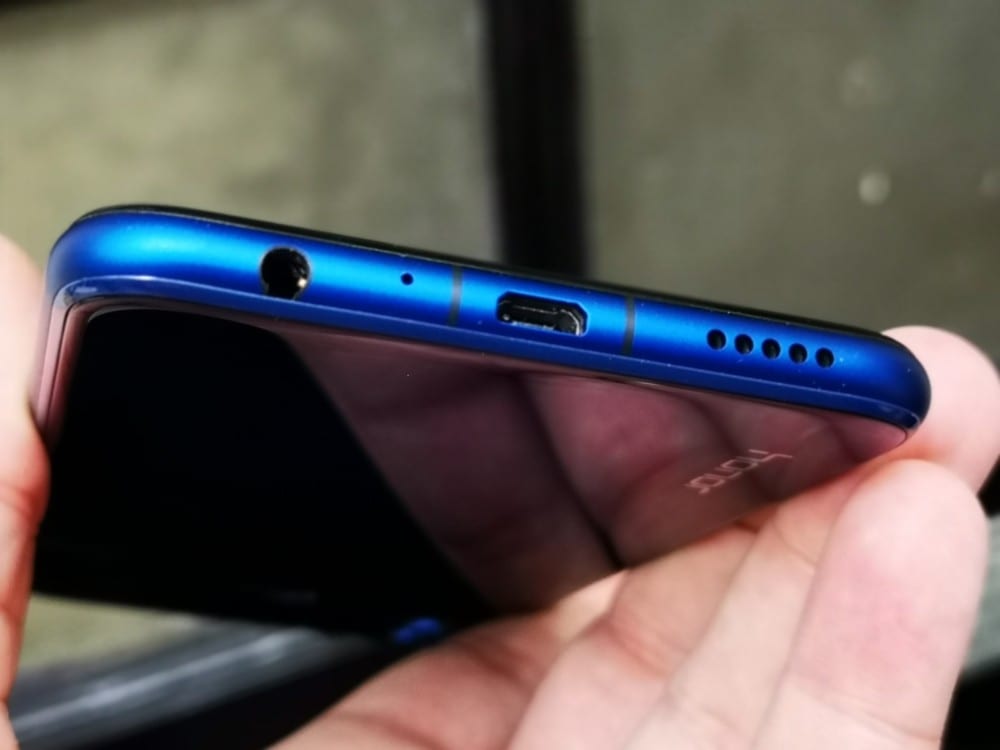 I’m big on taking photos with mobile cameras, so clearly the average camera was always going to be a concern to me, having already found the similar camera setups on the Honor Play, and even the Mate 20 Lite, to be a little underwhelming.

The second camera really seems to serve little purpose, but it enables Honor to offer dual-cameras on even the lower end models, even if it’s not anywhere near as good as on phones like the Honor 10 or View 10.

But, I went in expecting to be massively disappointed and ended up only mildly disappointed. My experience with low-light photography was as bad as I expected, but in good lighting conditions the camera does okay. 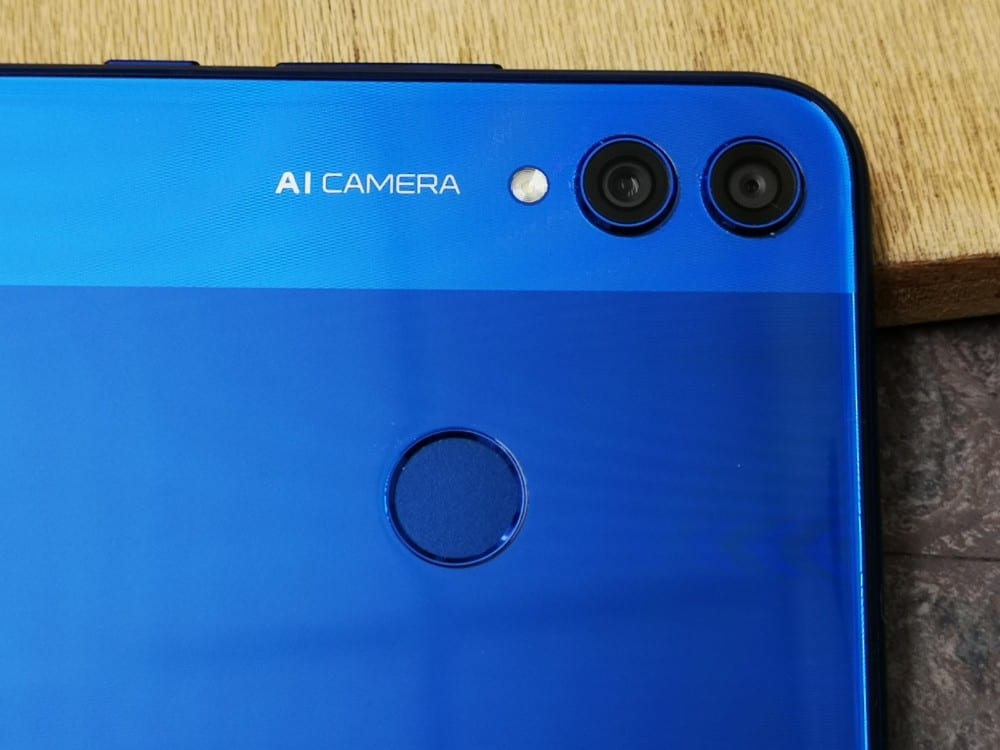 Adjust that in the display settings menu and you’ll actually find that things aren’t quite so overly saturated in real-life, and hopefully people you share your photos with will always see a more realistic image.

Video recording is not a strong point for most Honor (or Huawei for that matter) phones, but – again – it’s not terrible. There’s no 4K video recording, but you have the usual array of features like portrait mode, slow-motion (120 and 480FPS), HDR, light painting, time-lapse, various filters, panorama, and a professional (manual) mode.

You can also download more features, such as a document scanner and a special mode for photographing food.

All things considered, as long as you know what to expect, you should be able to live with the 8X’s camera. Especially if you’re someone who isn’t always taking photos on a phone and still prefers a separate camera for anything important.

Please note these images have been reduced in size for this gallery. You can see the originals on my open gallery, which Honor 8X owners can also add their own photos to.

First of all, that display is (have I mentioned this already?) amazing. Bright and clear, and despite being LCD only, still having a decent contrast ratio.

You can hide the notch, but if there’s any complaint it’s that the screen in landscape mode is shifted slightly to one side. Also, the real curved edge of the bottom of the display is different to that of the artificial one at the top (see picture below). I’m being very picky here I know, but it did frustrate me a little until I got used to it.

The rear-mounted fingerprint sensor makes the full-screen possible (arguably an in-glass fingerprint reader would be a bit much to ask for, although there’s no reason to assume Honor won’t include this in next year’s Honor 9X and other flagship models) and there’s also face unlock as a further quick way to unlock the phone, activated by simply picking up or tilting the phone towards you.

It’s nice to also have a screen protector fitted out of the box, but if I had to be picky again, it’s a plastic type that will pick up scratches relatively easily, or simply show indentations if you apply any form of pressure (such as a fingernail) in one area. 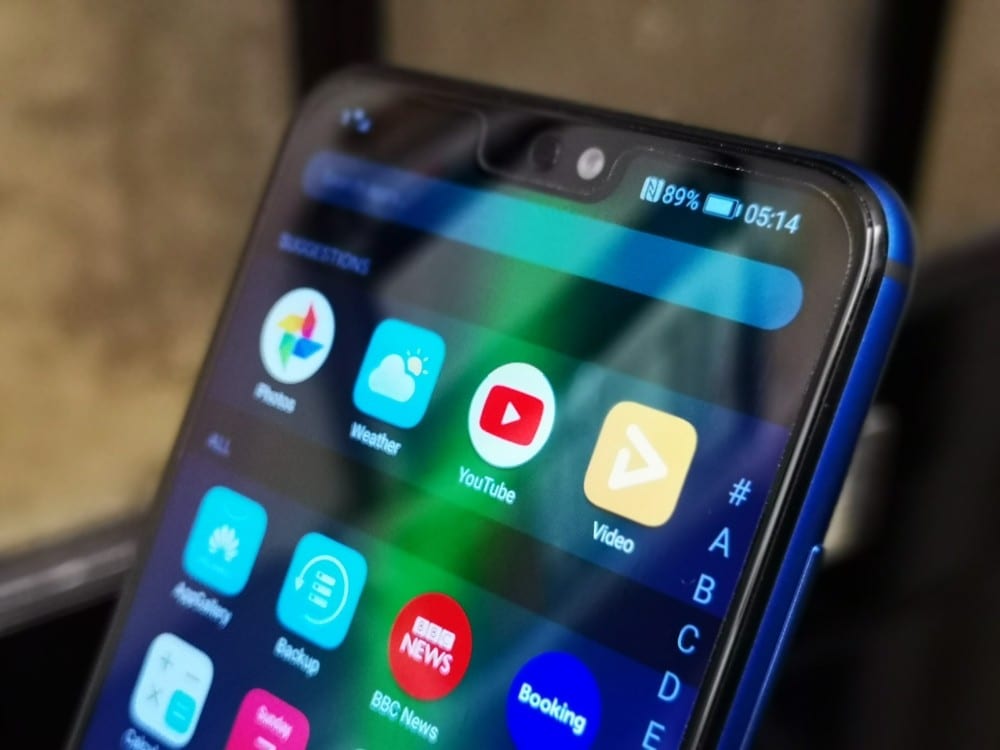 On the battery front, the 3,750mAh battery seems capable of keeping this phone going forever. You can easily attain 4 or 5 hours of screen on time, or if you’re not a heavy user of the phone for a lot of the day then you can come back to it, after six or seven hours, and be astounded to see it having lost only 1 or 2% of battery.

The phone ships with Android Oreo, but will get its update to Android Pie fairly quickly, and with that will come further battery saving features – but it’s not as if the phone really needs much improvement here. The EMUI version is 8.2, and the phone also has GPU Turbo support for compatible games.

It’s easy to look upon the Honor 8X and single out the average camera, but that is also doing it a major disservice. For an awful lot of people, especially those only wishing to share photos on social media, or create stories that expire in a few hours, it’s perfectly good.

It may not take the best shots at night, nor create amazing video footage you’ll want to publish on YouTube, but it can take good photos when the conditions are right, or when you take the time to get things right. 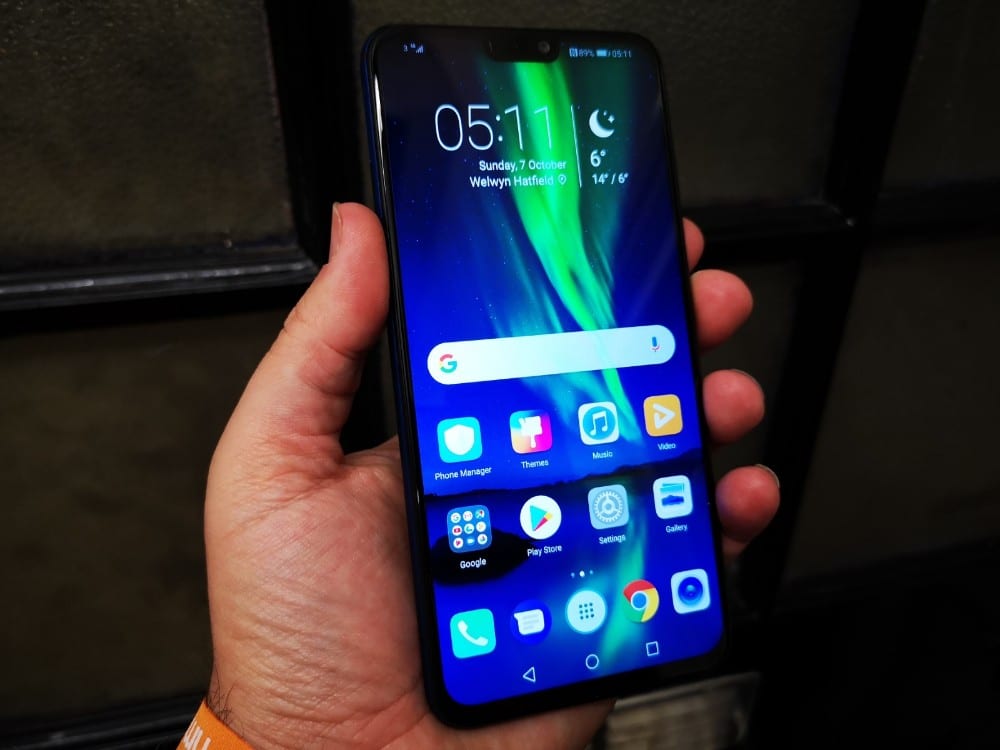 The use of a micro USB charging port is a bigger bugbear of mine, but that’s mostly because I’ve got many other phones and have accumulated lots of USB-C chargers and cables. If I only had one phone, then micro USB would be just fine. If my last phone wasn’t USB-C then I’d be fine too.

Sure, Honor needs to start 2019 with nothing but USB-C devices, and it’s certainly surprising to see on a phone being released so near to the end of 2018, but it is what it is. Every penny saved can be spent elsewhere, like incorporating amazing screens.

All things considered, if you want a large screen phone without stumping up a fortune then there’s very little else you can find in the UK market, let alone at such a low price.

For that reason, the Honor 8X comes with a very strong recommendation from me. It may not be the most powerful phone I’ve used, but it doesn’t need to be. It just needs to be a good all-round package, which this most certainly is.

And one more thing…

At the end of the launch event, Honor showed off the £59.99 Honor Band 4 – with a AMOLED full colour display, heart rate monitoring, sleep monitoring and mobile payment support.