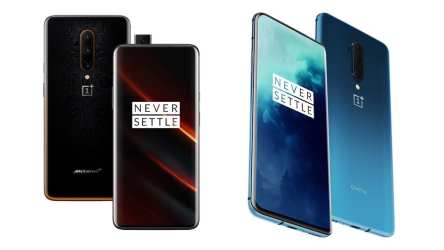 OnePlus has already unveiled the impressive OnePlus 7T, a rather significant update to the OnePlus 7 launched earlier this year.

Today is all about two new additions to the OnePlus 7T Series family, including the latest offering from its collaboration with McLaren.

While the 7T brings with it a major set of upgrades, the new OnePlus 7T Pro announced today (along with its McLaren edition) is a rather more conservative upgrade.

First of all are some tweaks to the camera, with an added macro mode (allowing photos of items as close as 25mm away), new nightscape mode with added ultra-wide angle camera support, tuning to the portrait mode, plus a new super stable video shooting mode that also makes an appearance on the standard OnePlus 7T.

However, the camera design on the back of the phone remains the same as the OnePlus 7 Pro, rather than adopting the circular design of the standard 7T.

The primary camera is a 48-megapixel with f/1.6 aperture and OIS, while the ultra-wide lens has an aperture of f/2.2 with a 117 degree field-of-view and EIS.

Unlike the 7T with a 2x telephoto zoom camera, the 7T Pro models have a 3x telephoto, 8-megapixel, camera with f/2.4 aperture and OIS.

The 7T Pro continues with an uninterrupted 6.7-inch display (no notch on account of the 16-megapixel pop-up selfie camera), with a 19.5:9 ratio, 2K resolution, complete with the obligatory 90Hz refresh rate.

This time around, there is no 5G variant. It is widely expected that this is due to the need to wait for Qualcomm’s next-generation 5G enabled chipset that isn’t likely to be ready for manufacturers to use until the start of 2020.

The 7T Pro now comes with a new Haze Blue colour variant, which is lighter than the 7 Pro’s Nebula Blue finish. The McLaren edition comes with a unique orange/amber (Papya) border around the camera and phone frame, in keeping with the 6T McLaren edition design language.

The McLaren 7T Pro comes with its own unique power brick, colour coded cable and an alcantara case.

In addition to these two new handsets, OnePlus also announced today a new colour variant of its bullets wireless headphones.

The pricing for the three OnePlus 7T models were announced as follows:

The 7T and 7T Pro will go on sale October 17th via John Lewis, Amazon and OnePlus – as well as from Three.

The 7T Pro McLaren edition will go on sale November 5th via Amazon and OnePlus.