I’ve taken a bit longer to review Huawei’s latest smart watch, and I place the blame firmly on Huawei.

If you’re going to produce a watch with such long battery life (Huawei says it will go for up to two weeks), don’t be surprised when I have to wait to fully test if it lives up to the claims.

The Watch GT 2 comes with Huwei’s brand-new Kirin A1 chipset, a new chip designed purposely for things like smartwatches or other IoT devices.

It boasts battery life of up to two weeks, which sounded rather unlikely to me, what with my previous experiences of watches with big, high-resolution, AMOLED displays falling far short of expectations.

The fact that Huawei advertises battery life measured in weeks, as well as an always-on display option, made me all the more cynical. I’ve heard all the boasts before, and I’ve always been disappointed because in most cases you’ll end up having to charge every day or two.

At least this has been my experience when using watches using Qualcomm’s rather less than stellar wearable chipsets, or WearOS.

But this watch neither uses a Qualcomm chip, or Google’s Wear OS.

Indeed, the key focus of this watch is about your wellbeing, with a range of applications to keep a watchful (sic) eye over you.

There a couple of extra features too, like handfree voice calling over Bluetooth (for the 46mm watch reviewed here, not the smaller 42mm model) and an integrated music player, using content stored locally on the watch as against streaming from your phone.

It was with this feature that I soon realised how few actual music files I now have, being a Spotify Premium user. Chances are you won’t have loads of files you can easily transfer.

Fortunately having a simple music control option for your phone’s music player is also possible, although you do have to activate the player from your phone first.

The integrated player does enable the watch to play music independently from your phone, which might be useful for runners that leave their phone at home. But do people really do this? Personally, I always want a phone with me in case something happens and I need to make a call.

There’s no model with integrated 4G, so you’ll need to keep your phone with you if you want to make or receive calls. In fact, there’s no Wi-Fi either, in case you were thinking it might pick up notifications or sync data when away from your phone.

The watch comes with a wealth of fitness tracking, heart rate monitoring, stress checking and other must-have features for anyone wanting to track their daily lives, whether just walking to and from work, to running marathons, swimming, cycling or hiking.

The heart rate monitoring and sleep tracking features are particularly useful, especially the latter keeping track of any naps you might have throughout the day. All of this data can be viewed on the watch, or via the Health app that runs on any Android or iOS device.

The Health app gives you the ability to spot trends in your exercises, as well as adjust the various parameters on your watch, as well as adding new watch faces (the choice is rather limited, especially if you’re after a digital face with seconds), updating the firmware and also sideloading music onto the watch.

You cannot share data with other Huawei watch users, so think of this watch as something for you and you alone, although there’s always a chance that Huawei will increase the functionality of the mobile app in the future.

The watch itself has two buttons and allows access to most functions, including features like a timer, stopwatch, alarms, compass and so on. All pretty basic stuff. Notifications can also be seen on the watch, but there’s no interaction.

The top button accesses the menu, while the second button can be set to access one specific function, such as the stopwatch, a contact, weather or something else you’d like to get quick and easy access to.

Set up contacts on the watch and you can make voice calls handsfree, and the quality is good enough that I had to tell people they were handsfree!

You don’t need to hold the watch up to your face either, but it is so far a feature I only use at home and probably won’t ever use outdoors as I am pretty sure you’re going to look stupid. But, hey, they said that about Bluetooth headsets over a decade ago.

The watch also allows you to hook up the Huawei Earbuds if you want a bit more privacy, and you can also opt to decide how you want to manage the screen.

This is an important thing to consider as it impacts on the battery life.

As someone who has always demanded an always-on display, this is an option that comes at a price, although the fact that I could go for almost 4 days before the battery died means I could certainly live with the display being on constantly (albeit at a reduced brightness level that might prove a little difficult on the eye on bright, sunny, days).

It’s worth noting that the always-on option comes with a restricted choice of watch faces (analogue and digital) and only the ability to alter a basic accent colour. It’s extremely simplistic, and reduces the battery life quite markedly from two weeks, but it will satisfy the needs of anyone who wants to see the time instantly.

The second option is to activate the screen by lifting the wrist and turning the screen to face you. The activation is incredibly quick and during my time with the watch, I actually came to trust the accuracy and consistency enough to use this rather than keeping the screen on all the time.

By doing so, I managed to increase the time needed to recharge to eight days. So, over a week but less than the ‘up to’ two week time advertised.

It’s probably not too much of a surprise to learn that I didn’t get the full time, as it is based on a set amount of usage that probably doesn’t relate to real life. It’s really the ‘best case scenario’ and I never got 45 days on my Amazfit Bip with real world usage.

Even getting 5 or 6 days would be ample for most people, especially given the speed of recharging (around an hour and a half) using the highly portable magnetic puck-shaped dock that uses any USB-C charger to power.

The display only remains on for a few seconds by default, but the period can be extended.

You can also extend things on a temporary basis by selecting ‘show time’ from the menu, which then keeps the time on for, say, five minutes. This is perfect if you need to keep an eye on the time for a period of time, but don’t want the watch defaulting to this forever more.

From the same pull-down menu, you can also turn on a do not disturb function that will stop the screen coming on for notifications or movement, making it ideal for sitting in a darkened cinema or theatre.

Everything on the Huawei Watch GT 2 has been well thought out, and although I am a little disappointed by the limited choices when it comes to watch faces (a similar complaint to the Honor Band 5), more seem to be getting added periodically, and hopefully at some point we might see the ability to create or download our own.

You can purchase the Watch GT 2 with a choice of finishes and straps, but in all cases you can use the quick release to change the 22mm straps to any other strap of your choosing. Amazon and the like have hundreds to choose from, and you may even have some depending on any watch you may have owned before.

The limitations of the watch are worth noting, such as there being no ability to use the watch for mobile payments. My watch actually has an NFC chip, but there’s no support for it outside of China, and I have no idea if that might ever change (the website suggests there isn’t even a NFC chip inside the global watches) so I merely mention in case you read elsewhere that there’s possible NFC support.

Notifications are also very simplistic. Fine for most people who can ‘screen’ notifications on the watch before turning to the phone, and I include myself amongst this, but if you want to be able to respond to a message on the go then this isn’t the watch for you.

There’s also no voice assistant, so you can’t go asking the watch to send a message or anything fancy like that.

However, if you’re after a good looking watch, packed with a wealth of tracking features, including the ability to check on your stress levels and perform breathing exercises to relax, the Huawei Watch GT 2 is a worthy consideration.

The battery life is in my opinion exceptional, and this is what wins out for me over a lot of other features I’d neither need or use.

While the Honor Band 5 may offer a lot of the same tracking features for £30, or less, it is also something to wear without drawing attention, while the Watch GT 2 is a premium looking watch that also has all of the tracking features.

Assuming you understand what the Watch GT 2 can do, and what it can’t, I have no doubt many people will finally feel comfortable to wear a proper looking watch that won’t leave you with dreaded battery anxiety issues. 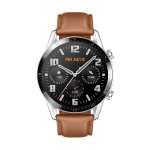