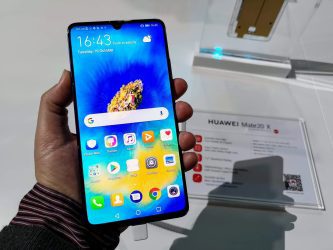 The Mate 20 X was announced in October 2018, but yesterday DxOMark finally gave it a score for its camera.

The total score of 111 puts it in the top 20, and serves a reminder of just how good this phone was when it first hit the market.

While serving more a niche market than the Mate 20 Pro, given its massive 7.2-inch display, the handset was an absolute delight to use for multimedia consumption, as well as the ability to use an M-pen for taking notes or annotating documents.

With the Mate 30 series never making an official appearance in the UK, the Mate 20 X is still to be considered a current release, despite its age.

With age comes a far more affordable price, with the 4G model now down to as little as £300 if you shop around.

It also has stereo sound, another feature the 5G model lost in order to accomodate the 5G modem and extra antennas.

However, both models have the same camera setup of a 40-megapixel primary camera, 8-megapixel telephoto (2x zoom) camera and 20-megapixel ultra-wide angle camera.

As you can see from the photos below in my own shared gallery, the camera is great, so if you’re not interested in laying down almost a grand on a new phone with a great camera, you can probably do worse than look at the Mate 20 X.

Also, if you’re after something a little smaller but still packing a mighty punch, the regular Mate 20 Pro has a score of 112.