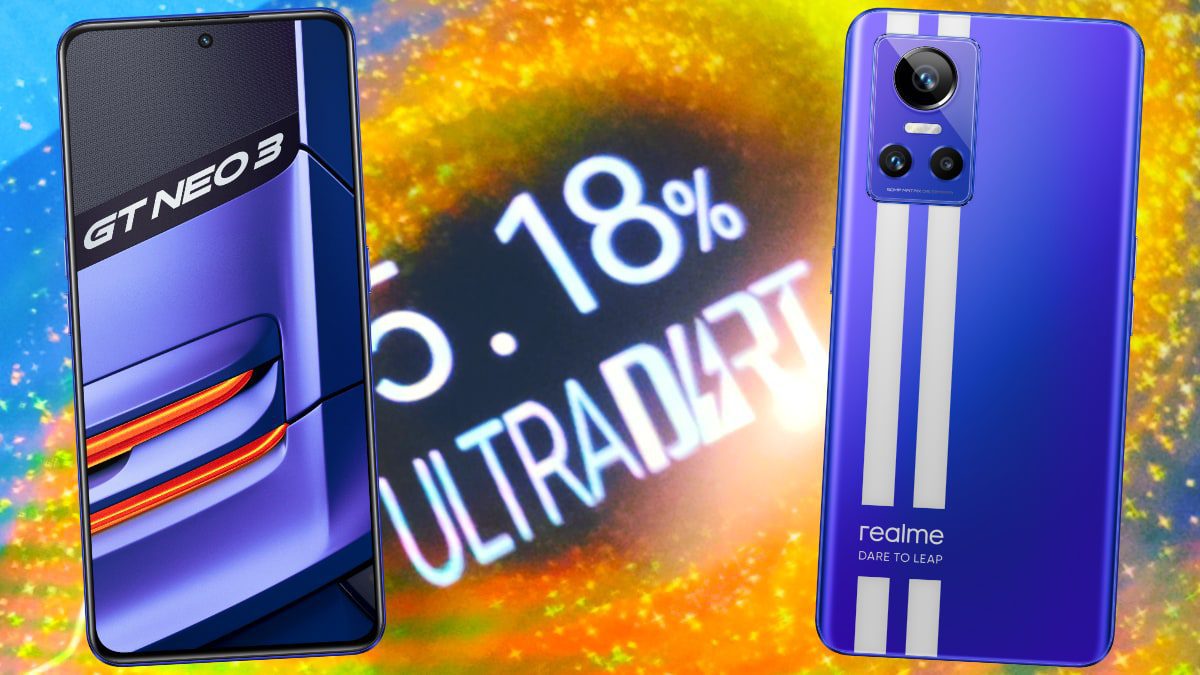 It’s not just in the car industry where the race is on for the fastest charging, and Realme is leaping ahead with the launch of the Realme GT Neo 3 – packing a mighty 150W of charging power. The W obviously standing for Wallop.

Of course, there’s little point buying a phone for its great charging ability if the phone isn’t up to scratch, but it would seem that there’s no need to worry about that thanks to the excellent MediaTek 5G performance.

As is common with Realme, when it launches a new series of phones (9 series or the GT 2 series), it creates a large portfolio of devices to suit different budgets and requirements.

I am not sure how successful this is when there is a fair degree of crossover, but Realme clearly likes to position individual models to very individual users.

On paper, the GT Neo 3 has a very similar specification to the GT 2, but has a larger 6.7-inch display that matches the GT 2 Pro.

What the GT Neo 3 brings to the table is the incredible 150W charging, which can get from 0-100% in under 20 minutes. More impressive yet, you’ll get to 50% in just five minutes.

To pack in the extra charging tech, the 150W variant comes with a 4,500mAh battery compared to 5,000mAh on the other GT 2 models. There is a variant in some markets with a 5,000mAh battery and a more modest 80W charger (as well as a GT Neo 3T model that also has an 80W charging speed), but with the 80W version perhaps not being quite as revolutionary compared to the many 65W Realme phones already on sale, the company has perhaps wisely opted to only go with the turbo nutter b**tard variant here.

There’s not a great deal to be said about the design of the GT Neo 3, as it shares many characteristics of the GT 2 and GT 2 Pro, bar a different rear design. Instead of the faux leather-feel back, you get a more traditional gloss finish, with racing stripes that serve as a reminder that this phone is all about speed.

The volume keys are on the left, like any other Realme phone, the power button on the right, a USB-C charger at the base and two stereo speakers. There’s no 3.5mm headphone jack, which remains a feature reserved only for more low to mid-range models.

A protective case is included in the box also.

The 6.7-inch display has a 120Hz refresh rate and HDR10+, with a Full HD+ resolution and plenty of brightness (topping out with a peak of 1,000 nits). The screen incorporates a responsive fingerprint sensor, and has a pretty small bezel all around – the smallest being at the side (1.48mm) and the largest being 2.37mm at the bottom.

Like the other Realme devices, the screen is completely flat. Some may prefer the curved displays on more premium models from the Oppo and OnePlus brands, but others much prefer the flat display for things like third-party screen protectors (one is factory fitted out of the box) and a lack of distortion on the edges.

Hardware wise, the phone features its own dedicated display processor, which improves frame rates for gaming and streaming, by inserting frames based on real-time analysis of images.

You would be right to think that Realme must have had a delivery of too many Sony IMX 766 image sensors, given how many of its devices have included it this year, and last.

Shared with flagship phones from Oppo and OnePlus also, the 50-megapixel camera features Optical Image Stabilisation and is a well proven sensor that takes fantastic photos. It’s the same camera that is also included on the GT 2, GT 2 Pro and the Realme 9 Pro+.

Accompanying the primary camera is a more humble 8-megapixel ultra-wide camera, and a 2-megapixel macro camera. Do I really have to say again that the time to end using 2-megapixel cameras on a phone was about two years ago, probably longer? It seems that, sadly, the answer is yes. Why these cameras still appear on new phones, I really do not know.

Fortunately you won’t need to use that camera for anything other than macro photos, and the mix of ultra-wide and wide will give you an effective shooting range of 0.6x – 5x zoom. 5x might begin to show up some over processing as the camera tries to get more detail from the standard 50-megapixel camera image, but even if you just swap from 0.6x to 2x, you’ll have plenty of flexibility.

Realme also allows digital zoom up to 20x, but it really shouldn’t be used with any degree of seriousness.

One of the best features of Realme’s camera software is the Street Photography mode, which allows you to quickly capture action shots on the go. Whether at a sporting event, trying to capture the action as someone runs or skates by, or just trying to keep pets and children in check, you can quickly set the focus and exposure in advance and then shoot away – capturing multiple shots with ease.

For video, you can record up to 4K at 60fps, and also take decent selfies with the front-facing 16-megapixel camera. Low light performance is also great, and there’s no point repeating myself on this as the camera performs just like earlier phones I’ve reviewed.

You can see photo samples below (can you tell when I took them?!), showing just how good this camera is – and why you will likely continue to see more phones coming in the future with the exact same camera setup.

These days, it isn’t solely down to image sensors to get the best quality images – and Realme’s camera software and image processing is up there with the best of them.

The Realme GT Neo 3 is the first smartphone using MediaTek’s Dimensity 8100 platform, and if you’re not sure how it slots in amongst the usual Qualcomm chipset range, its AnTuTu benchmark score of 818,121 quickly shows that this is very much a performance device for more than just fast battery charging – actually nudging slightly ahead of Qualcomm’s Snapdragon 888 chip.

But the USP of this phone is the battery charging tech, and what a performer it is! With Realme’s multitude of power management options, you can easily get a full day of usage (around 5-6 hours of screen on time in the real world) and if you are caught short, the charging time is stupidly fast.

It takes 20 minutes or less from zero to 100%, and this can vary based on whether the phone is powered up at the time you charge, or other factors like the phone being on and in use – which will obviously slow things down as some power is consumed to power the processor, screen etc.

Ultimately, it’s insanely fast however you look at it.

It is worth noting that the power supply, included at no extra cost, is quite chunky and the charging cable not as flexible as a normal power lead. This is to ensure the cable is sufficient to deliver the necessary power, but if that makes you worry about battery safety, Realme insists it is perfectly safe.

The other concern is battery longevity, with faster charging equalling more damage for every charge. Again, Realme has worked on this and boasts a much higher number of charge cycles than phones that charge at a much lower rate.

With 38 layers of safety protection and a dedicated MCU charging security chip, the device offers a high level of security and is certified by TÜV Rheinland for Safe Fast-Charge System. Furthermore, realme GT NEO 3 boasts a battery capacity retention of at least 80% after 1600 complete charge and discharge cycles, twice the industry standard, extending battery life and improving the longevity of the device for users.

Like the other models released this year, the GT Neo 3 comes with Realme UI 3.0 and is built on Android 12. It has a load of personalisation options, always-on display, gestures and is also very smooth and easy to operate. With similarities to phones from Oppo and, more recently, OnePlus, anyone that has already invested in the ecosystem will take to this phone like a duck to water. Again, there’s little point going over the UI when it is fundamentally the same as I’ve described in earlier reviews.

While I think I’d prefer fewer models in Realme’s overall range, given the level of crossover, the fast charging capability of the Realme GT Neo 3 is a groundbreaking feature that definitely makes the phone stand out from the crowd.

Where time is of the essence, the sub-20 minute charging time will eradicate battery anxiety issues, as long as you have access to mains power. Even if you can only grab a quick top-up, a few minutes here and there will get you back up and running in no time.

It’s a shame that for charging via a power bank, you’ll be limited to a much more mundane 18W using USB Power Delivery, which seems positively archaic in comparison. Somewhat ironic when 18W is still considered fast for some phone manufacturers!

Realme has upped the ante considerably, and there’s more to come in the future. At Mobile World Congress back in February, Oppo demonstrated a concept phone capable of receiving a charge at 240W – and doing a full charge in just 9 minutes! That isn’t likely to make it to market for a while yet, so there’s no reason to wait – but it does go to show how fast technology is advancing.

For now, I doubt anyone is going to think 20 minutes is slow because of what might be on the horizon. It’s a massive leap, and if you want to be at the cutting edge then the time to buy is now.

The Realme GT Neo 3 is available with 12GB of RAM and 256GB of storage, in a choice of two colours; Nitro blue and Sprint white. Each model will retail for £599.99.