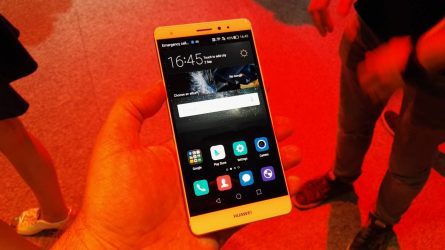 Today I got my hands on the new Huawei Mate S and decided to produce a short video to show the phone, and also demonstrate how near-instant the fingerprint unlocking is.

I’ll have more time to look and play with the phone in the coming days and have a review up later.

Given I liked the Huawei P8, I hope I’ll be equally impressed with the Mate S. It’s a very nice looking phone, perhaps let down by a low battery capacity that could impact battery life.

Only a proper length of time to do a detailed review will be able to confirm this or not. Likewise, only a proper test of the camera can reveal if it’s superior to the camera in the P8. Although essentially the same on paper, Huawei did tell me that it is using an updated image sensor.

But one thing that I can publish right now is the benchmark results.

People always ask me for benchmark scores, so I am happy to oblige – as well as show a quick comparison with the Huawei P8 (Kirin 930). As you can see, there’s not a great deal in it.

Not quite up there with other flagships from 2015, but even at a higher price than the P8, the Mate S is still a far cheaper offering than many alternatives.

Note: I have been taken to Berlin as a guest of Huawei to help the company promote the new phone. However, all thoughts about the phone are my own.