I knew the One Plan was dead. I knew I’d be getting ‘the letter’ one day.

But despite knowing my days were numbered (arguably, I’ve lasted longer than some given I’ve been out of contract for well over a year), I still didn’t expect this.

It’s certainly not in keeping with its ‘make it right’ advertising campaign, although it’s not the first example of Three doing something sucky while advertising the exact opposite.

Three has said in the past that many people abused the unlimited tethering part of the One Plan, and there can be no denying that some people did take advantage of something that Three, rightly or wrongly, promoted as a major selling feature.

Shop staff and social media said using it to connect a PC, console or TV was fine. The only restriction came in the form of Three’s TrafficSense to throttle users file sharing.

Even Three’s own usage guidelines stated 1000GB as fair usage (yes, 1TB) so perhaps it should have thought more carefully about what it was offering from the start?

In any case, is it fair to kick everyone off the plan and force them onto something costing significantly more? In my case, £15 a month will become £30 a month from the end of February. 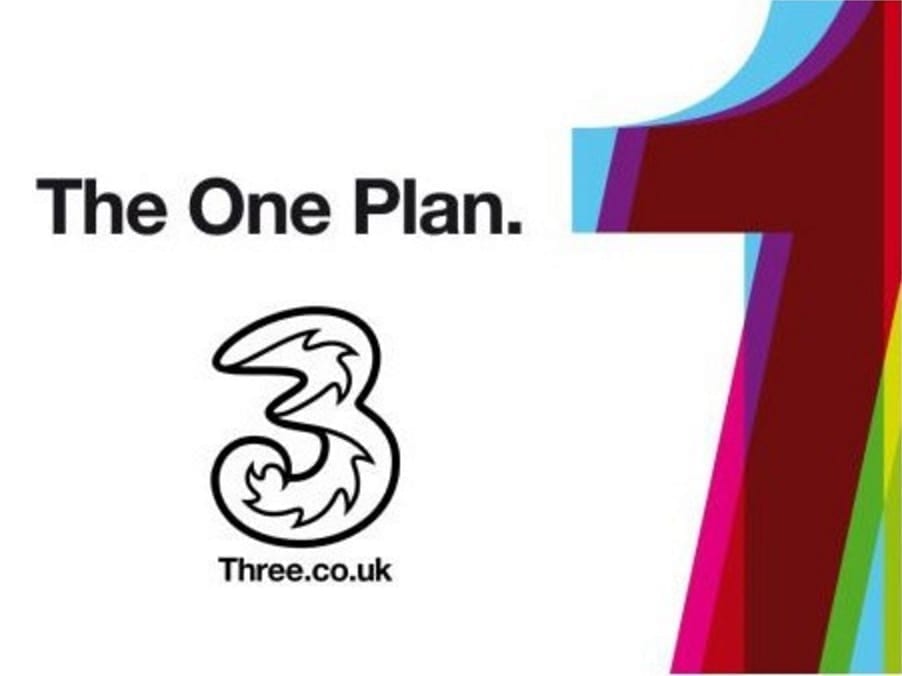 Noble origins of the One Plan

As a small player, Three generally lost out by receiving more calls than it originated. It started a campaign that gained huge public support, with other players including BT getting onboard. It also got the full support from me as Editor of What Mobile magazine at the time.

To cut a long story short, Ofcom finally agreed to massively reduce the rates. And even before the cuts came into force, Three launched the One Plan (at a great risk had Ofcom decided against the cuts).

The One Plan offered 2,000 minutes of calls to ANY network, which was unprecedented at the time. It really was a game changer. Suffice to say, it helped win Three awards and a very loyal following of customers who acted as volunteer advocates to try and tell everyone just how much better Three was as a network than the greedy ‘big boys’.

Along with unlimited data, the plan was exceptional value even at its original £25 per month rate, and undoubtedly responsible for helping Three make a great deal of money and boosting its reputation.

Now it seems the launch of the tariff is nothing but a bad memory for Three, a hindrance to the stability of its data network due to a small level of ‘abusers’, and something it wants erased from history completely.

Have no doubt, every single One Plan customer will get kicked off. It’s just a matter of time, with the heaviest users likely targeted first.

It’s generally unheard of for a network to kick users off a tariff. Networks can discontinue plans, or increase charges by the rate of inflation, but as long as you keep paying the bills then it’s fair to say you can usually live out your days on whatever plan you’re on.

Even One2One (which went on to become T-Mobile) never kicked people off the PersonalCall tariff, but simply allowed the rental to creep up until the offering of free local calls in the evening and weekends ceased to be good value compared to other plans.

People usually change tariff because they want to, either to upgrade a phone or perhaps benefit from a newer tariff that offers more for the money. In Three’s case, there’s not really a plan that can come close to matching the One Plan.

Unlimited minutes and texts doesn’t really count. A lot has changed in the last few years. People make fewer calls, and SMS is increasingly being replaced by instant messaging. 95% or more of Three’s network usage is data.

It’s no wonder that as calls and texts are decreasing, networks see ‘unlimited’ as something to offer that sounds a lot better than it is.

From now on, it’s clear a Three customer is fair game once the minimum contract period is up.

My letter shows that in a month, my current £15 a month plan will double to £30. A plan that ditches unlimited tethering, but gives me more calls and texts I don’t want or need.

The letter adds insult to injury by telling me ‘there’s no need to worry’ because the change is automatic. It talks about the plan being discounted by £3 and not available online. Anyone would think the letter was written by someone who comes into your home to sell double glazing late and night and wants you to believe you have the best possible deal if you ‘act quick’.

In this case, acting quick is accepting the deal and filing the letter away to accept the inevitable.

Stating the deal “isn’t available online, in store or over the phone” will no doubt stop some customers from even trying. If it’s the best deal, what’s the point?

Yet, people who do take the time to sit on hold often find they can get discounts of £5 or more, as well as getting 3,000 minutes of Three-to-Three calls added on (useful for the plans without unlimited minutes).

So, that’s a further insult because the deal in the letter is absolutely NOT the best offer they can make.

When the One Plan was discontinued over a year ago, it was replaced with a fixed tethering limit. This started at 2GB per month on a handset contract and 4GB on a SIM only contract.

More recently, it has been increased to 12GB on SIM only contracts. 12GB for tethering isn’t bad and would suit me fine, so why couldn’t I have simply been told my plan is changing to impose a 12GB tethering limit?

I’m happy with my calls and texts. Heck, bump me up by the rate of inflation if you wish.

What will Three do next?

Last year, Three introduced new tariffs with higher amounts of data to sit below the all-you-can-eat plan. Many people, myself included, believe that sooner or later the AYCE plans will either be axed, or the prices increased further to discourage most people from choosing them.

Their existence may end up allowing Three to advertise that it offers unlimited data, even if the number of people with unlimited data is greatly reduced and will continue to fall.

And, we’ll all be aware that at some point those who enjoy one of the new tariffs will find that they’re now old tariffs, so can look forward to letters of their own.

Over a year ago, the network was told it must stand on its own feet and get its house in order, presumably as a precursor to a purchase of O2.

This has seen price increases on tariffs, a U-turn on not increasing charges in line with inflation during the contract term, plus hidden changes like reducing the amount of data you can use abroad on Feel at Home (12GB down from 25GB). Feel at Home itself is flawed due to the restriction or slowing down of certain services.

It beggars belief that a network can be using a purple muppet to say Three is going to stop things sucking, when there are people within Three hell-bent on making sure everything sucks – to the point where people either accept the higher costs, or leave.

Leaving is of course what a lot of people are doing. Call centre staff even admit to it quite openly.

I can’t help but feel I’m going to be adding to the churn rate.

I had to update this article to give an update on what has happened since.

Firstly, I contacted Three and following some lengthy battle-of-the-wills stuff that eventually got me transferred to the customer relations team in Glasgow (in effect, Three escalated it as a customer complaint) was offered a change to the AYCE data, unlimited texts, 600 minutes plan for £20 a month – and still on a 30 day rolling contract basis.

I have also found that many other users have secured the same deal, or even got the top plan (AYCE data, unlimited texts and unlimited minutes) for the same £20. Others have secured deals for similar amounts, or got 2,000 Three-to-Three minutes added on to lower plans.

All in all, Three IS willing to haggle and by quite some margin. But of course this means you have to play the game. You need to phone up and play hard. Remember, you have the ability to cancel your contract and go elsewhere – so don’t be afraid to say as much.

If Three won’t budge, then request your PAC code. You then have 30 days to use this, or it expires and you remain connected. As such, you have nothing to lose. If you don’t get what you ask for (and customer services have no power to discount and will insist there are no discounts on offer at all) then either make a complaint or request the PAC and wait for a call in the coming days. Three will call back to make you an offer, and you can then continue negotiations.

It stands to reason that you shouldn’t be greedy. Unlimited tethering has gone and it isn’t coming back, so you won’t be able to ask for it at any price. And don’t think you’ll get an offer that brings down the rental to £15 for the top-end plans (and if anyone does get this, I’d recommend you keep quiet!!). If you want a cheaper monthly bill, you’ll need to accept a limit on data or calls.

Ultimately, I’m happy to pay £20 a month and have the freedom of a 30 day contract, although in the back of my mind I’ll have to keep wondering if that’s because Three won’t hesitate to write to me again in the future to change the game again.

It’s also proof that Three is relying on customer inertia to just accept the new fee. Perhaps some people don’t have the time, or confidence, to haggle. It’s what companies do every single day, and why people pay too much for electricity, gas, insurance and even bank charges. It’s not what you’d expect from a company that talks about wanting to stop things that suck – but I digress…

For now, I have to stress once again that if you want to stay with Three – don’t sit back and do nothing. Disregard all the content of your letter that says the chosen tariff with the £3 discount is the best you can possibly get. It’s false. Get on the phone now!

71 thoughts on “[Updated] I had a good run on the Three’s One Plan, but never expected it to end quite like this”