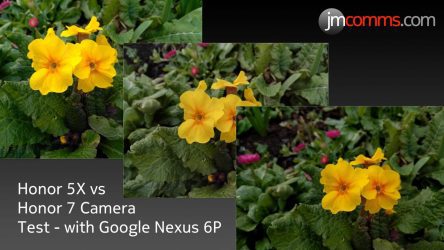 Having had the Honor 5X for a few weeks now, I though it about time to do some comparison testing.

The Honor 5X offers a larger display over the Honor 7, plus the benefit of allowing both two SIM cards and a memory card. My testing so far has also shown that the battery life has been somewhat exceptional, which may be enough to accept the lack of 5GHz Wi-Fi and the very fastest 4G speeds.

But this article isn’t about reviewing the hardware, and looks solely at the camera.

You can see my other photo galleries with photos from the Honor 5X here and here.

Given the Google Nexus 6P is also made by the same company, and also uses a Sony-sourced image sensor (all three do), I thought it would be fun to also take photos and video to demonstrate what the extra money may or may not buy you.

As ever, I prefer to let the photos do the talking so take a look at the gallery below – and remember to click on each individual picture to view at full size. Also remember that most photos won’t be viewed at anywhere near full-resolution, so take that into consideration when deciding on what you actually want from a phone camera.

I’ve also created a short YouTube video too, with a short 15 second video clip recorded on each phone. On the Nexus 6P, I took advantage of the Ultra-HD mode, so as to see the quality from the highest quality modes on each device.

As ever, please let me know your thoughts in the comments below.

(Above video also contains all of the above photos in a slideshow, if you start from the beginning)