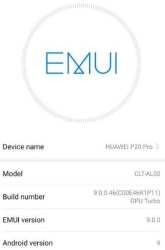 Huawei has announced the pending introduction of EMUI 9, the latest version of Huawei’s custom skin to sit on top of Android Pie (Android 9).

A beta trial is now starting in Europe, although at this time that excludes the UK. Not that this will stop some from installing the beta ROMs via third-party services, such as Funky Huawei.

Initially the trial will include handsets from the Mate 10 and P20 family, before rolling out to older handsets later in the year. On the Honor side, handsets getting an upgrade first will include the Honor 10, Honor View 10 and the recently launched Honor Play.

Android Pie will bring a series of optimisations, including improved battery optimisation and management, GPU Turbo 2.0, faster app-loading times and the Digital Wellbeing service from Google that encourages users to manage their smartphone usage for a better work-life balance.

Part of this service will be the ability to monitor your usage of individual apps, as well as being aided in winding down at the end of the day to sleep.

Dr. Wang Chenglu, President of Software Engineering, Huawei Consumer Business Group, said at an EMUI briefing in Germany: “Today’s smartphones are loaded with an abundance of features, to a point where they can be overwhelming to everyday users. Many users have also expressed their frustrations regarding increasingly complicated features. It was against this backdrop we set out to develop a version of EMUI that will help consumers enable a quality life.

“EMUI 9.0 is born from a commitment to creating an enjoyable, consistent and simple experience. Every change, from consolidating the settings menu, to optimising the performance, to including new digital wellbeing and productivity features, is made to ensure EMUI 9.0 delivers a great, user-friendly experience. Furthermore, with the launch of EMUI 9.0, Huawei becomes one of the first handset makers to launch a custom OS that is based on Android Pie, which I think speaks volumes of our close relationship with Google.”

Another new feature will be HiVision, that turns the camera app into an image recognition service using augmented reality. Point the camera at famous landmarks or paintings, for example, and get on-screen information instantly.

Finally, a new Password Vault can store encrypted passwords that are protected by your face or fingerprint, for easy secure retrieval when needed.

Further features will also be available on Kirin 980 based devices, to be announced at the launch event for the Mate 20 series in London on October 16th. Huawei hinted at a briefing in Germany during IFA that the Mate 20 and Mate 20 Pro will have a number of all-new features to take advantage of the dual-NPU (Neural Processing Unit), but all details are being secret for now.

As EMUI 9.0 was designed to help users lead an enriched and balanced life, digital wellbeing is also a big focus of the new OS. EMUI 9.0 features a new Digital Balance dashboard, which tracks device usage metrics and allows users to set usage quota for each app; and Wind Down, which helps users to relax before heading to bed.